Review: FoxOne Advanced Edition: all flight, all combat, no ads, no IAPs!

I've railed against freemium games which, quite frankly, take liberties with their players and their money, though - in fairness - there are also some good examples, freemium done right, as it were. And then you have traditional games like FoxOne Advanced Edition here, where for around $3 (£2) you get everything. And I mean every plane, every weapon, all unlocked through the time-honoured method of playing well. Making FoxOne Advanced Edition a cracking buy and a lot of fun, without any in-app-purchase worries or doubts. 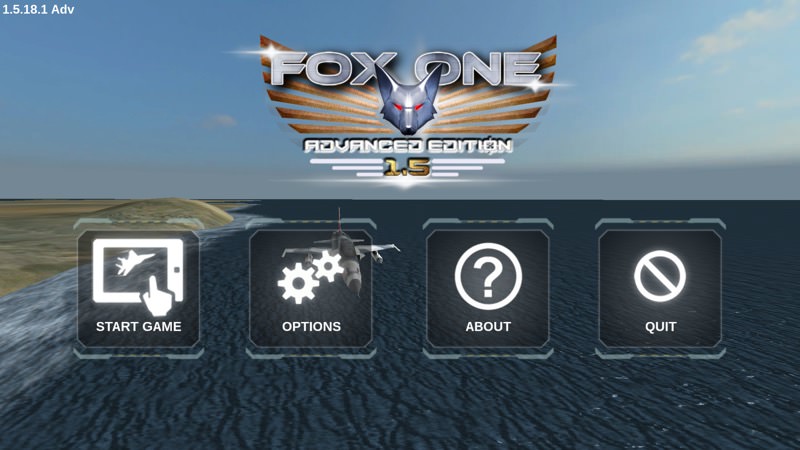 FoxOne is a flight simulation game coming from Brazil and is cross platform - it also comes in various forms and is under active development - there was a big update halfway through my review period. This is the 'Advanced Edition' and the one with all the bells and whistles - yet for only £2 or so, with no extra purchases needed - ever. Or ads to view. All very refreshing in the current day.

If there's a core concept to this combat flight sim it's that staying in the air shouldn't be too hard - with the default flight model here meaning that your stick inputs (via tilt or touch controls) are sanitised to an extent, to make sure you don't veer into a mountain. Of course, you can still crash if you really want to - or are that bad a pilot. And if you really want full control then you can turn on the 'Expert controls' and then execute whatever crazy manoeuvres you want to, with full responsiveness. In fact, you can crank up or down the control responses in either mode, so you can quickly tailor FoxOne to how you want to fly. 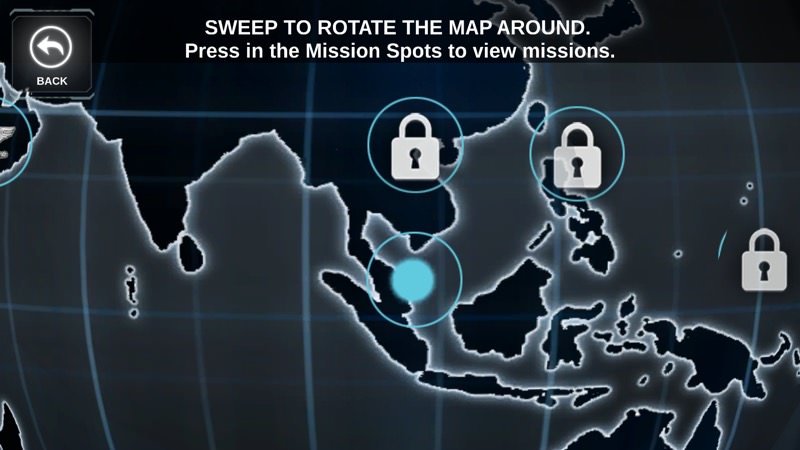 As with other combat flight sims, you're pitched missions around the world, 17 of them in this case, and you work through them in order, unlocking each in turn once the current one is fully accomplished (after the first few, you'll need several tries at each), though you can go back and play any again at any time.

Missions are pretty varied in terms of terrain and objectives and introduced in a rendered briefing room, it's all rather stylishly done, with high production values: 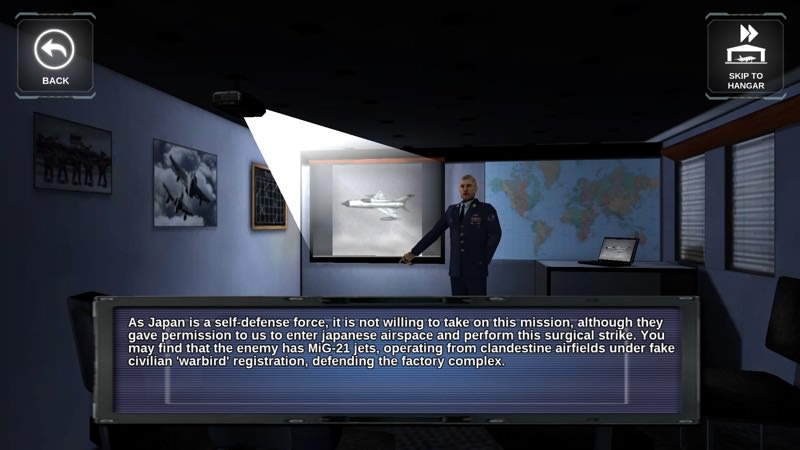 Also rendered are the transitions between areas in the game sections, through weapons selection (which can be tedious, so there's a helpful 'auto-load' option) and out of the hangar. Weapons include built-in cannons, guided air-to-air and air-to-ground missiles, bombs and unguided rockets. Each is most effective against certain types of targets and it'll take a few flights to get used to which to use when. As in real life, except here there's unlimited budget and unlimited lives... 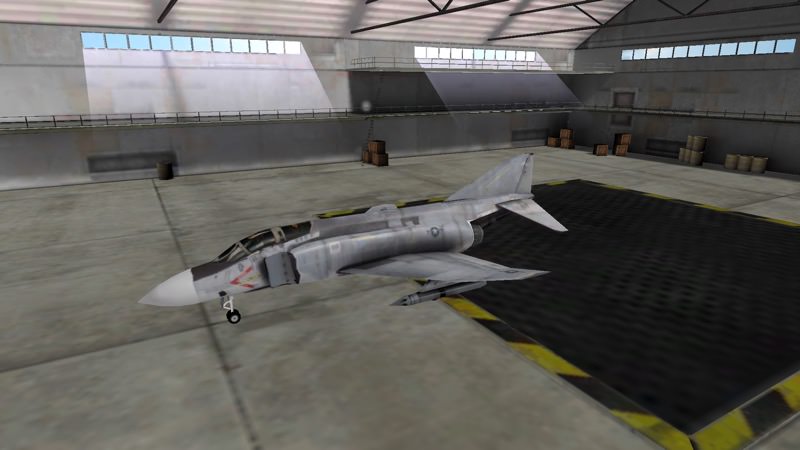 As you can see from the screenshot above, the level of detailing on the planes is tremendous, plus there's a terrifically wide range of craft to fly - and you don't have to use a particular plane for a particular job - though it's often easier to go with the new one that's just unlocked. Work your way up to the mighty F-22 Raptor, etc.

And so to the missions and flight - each is presented to you as approaching the target area, so as to get you into the action as quickly as possible. No more flying for hours to get to the objective, as in some other games.... A red arrow on-screen and on the radar indicates whichi direction to fly in. 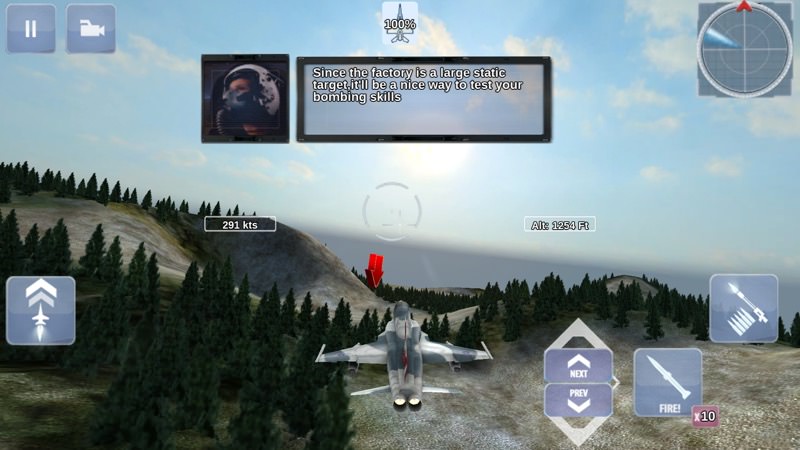 If this is all sounding too easy (in the target area, no throttle control, no landing, simplified flight model, etc.) then don't worry - the amount of things you need to find, lock onto and blow up quite closely matches each plane's armament (and then only if you picked the right one), plus there are aerial threats too, sneaking up behind you and launching air to air missiles. 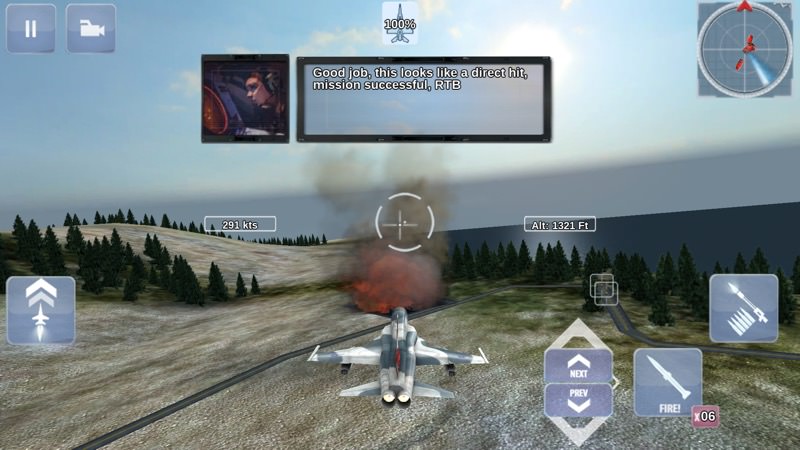 Missiles are selected with a tap and then they whoosh away on-screen, with satisfying explosions if they make contact.

The camera control, top left, cycles between the chase view above, a full-screen HUD view, an interior cockpit view (which varies in complexity from the vanilla one below to rather more active displays, depending on which plane you're in): 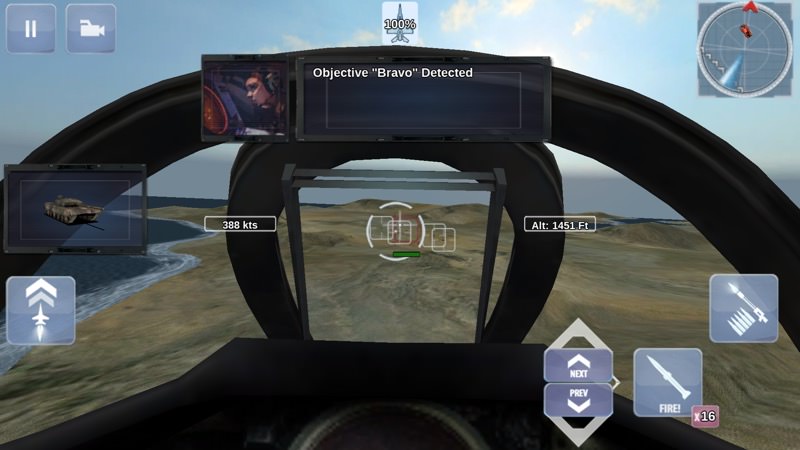 ... and finally a 'admire the view' lead view, though obviously it's best not to use this much if there's action taking place! The scenery glides by smoothly, even passably so on low end Snapdragon 400-powered phones like my Lumia 830, so the 3D engine is a credit to the developers. There's a warning about low RAM in the About screens but in my testing missions on 1GB phones I never once had to restart in order to free up enough memory. 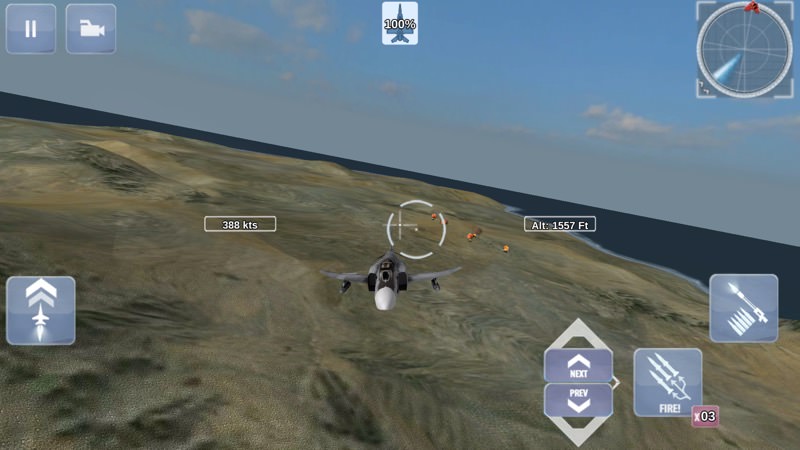 There's an internal currency, designed to control your access to planes and weapons, but don't worry, there's no freemium component - the currency remains completely virtual and in-game. As you can from the screenshot below, it's quite easy to amass virtual riches from successful missions: 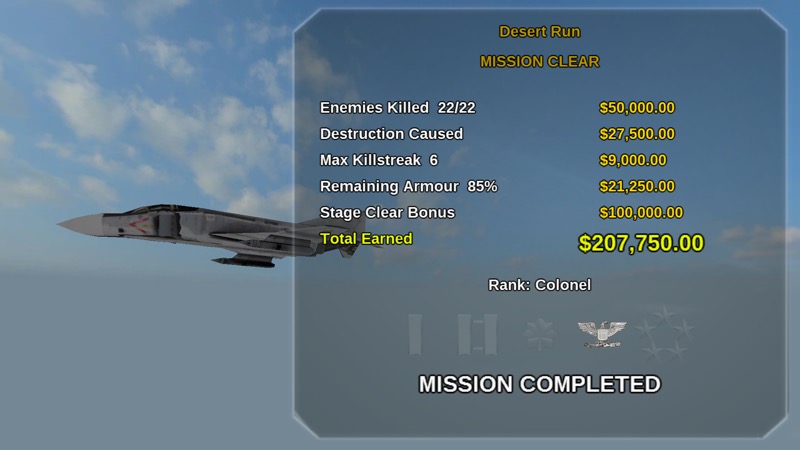 My earliest memories of flight sim addiction were F-15 Strike Eagle II on the PC - this made it very easy to get into the action, provided furious aerobatics to evade incoming missiles and track down and eliminate ground and air targets, and provided a friendly enough flight model that (unlike the real world) you didn't have to spend half your time managing the aircraft to stop it from ploughing into the ground.

FoxOne Advanced Edition feels very much in that mould, and given the welcome lack of freemium (or even online) gimmicks, receives my heartfelt recommendation. It's not perfect yet, but it's under development, it's an awful lot of fun, works on almost any Windows Phone or Windows 10 Mobile device and is cheap to buy.

What are you waiting for? Get airborne and fighting for the free world!

PS. There's a web site dedicated to the game here.