Smashy Road: Wanted uses similar 'retro' blocky graphics to the hit Crossy Road, but this time you're driving. And on the run. And heading wherever you like, chased by police with cars and helicopters (and more), it's up to you whether you dice it out on the roads or try your luck with rougher terrain. It's all in miniature, but is great fun, and is definitely 'casual' in duration - the average game/attempt (to escape) is about a minute!

You are WANTED! Take your driving to new heights! Master and unlock all 90 vehicles. Race through the dessert, grasslands and the city or encounter SECRET areas with great rewards! Escape the POLICE, the SWAT, the ARMY JEEPS and the TANKS! How long can you last? Smash the road and see if you can beat your friends highscore in the online leaderboards!

The aim is to amass dollars in order to buy other, stronger and faster (and more exciting) vehicles and in typical premium fashion, this takes an eternity to grow. There are some lesser vehicles offered as prizes to a fruit machine mini-game, but otherwise if you want something heavyweight to drive then you'll have to dive into the in-app-purchases.

Here then is a visual review of this new casual hit. 'Smashy Road: Wanted' strikes just about the perfect blend of freemium and commercialism - occasional players can still enjoy the ride, while hard core fans will want to grab £10 or more of vehicles and play with how these effect your chances of evading the law for longer. 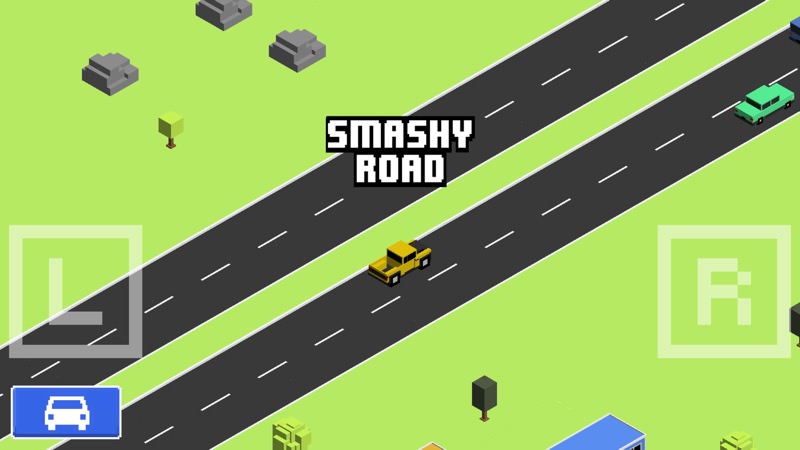 Your opening view, the controls are ultra-simple, just left and right, with the hot zones shown here on the opening panorama. Acceleration is all automatic - forwards if your way isn't blocked, reverse if it is! 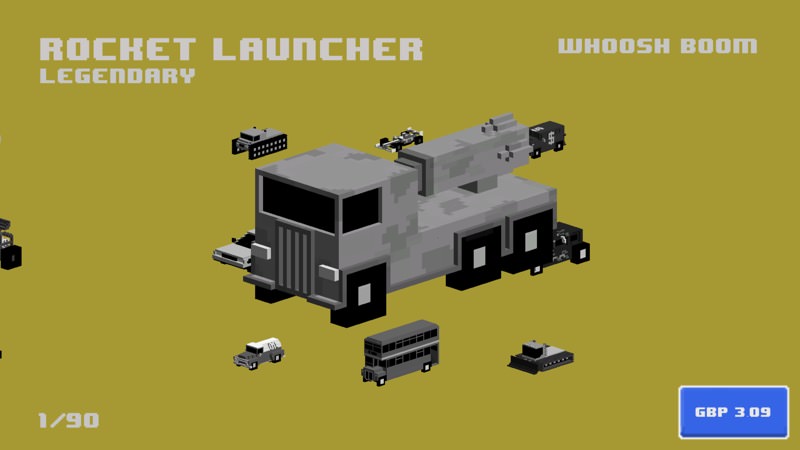 You'll want to splash out on an at least one premium vehicle - what about this heavy duty, military grade rocket launcher? The other hundred or so cars (including ice cream trucks, tanks and err... F1!) are all shown in the main selection grid, in swipeable pages - tap on each to bring it up large, for inspection, naturally. 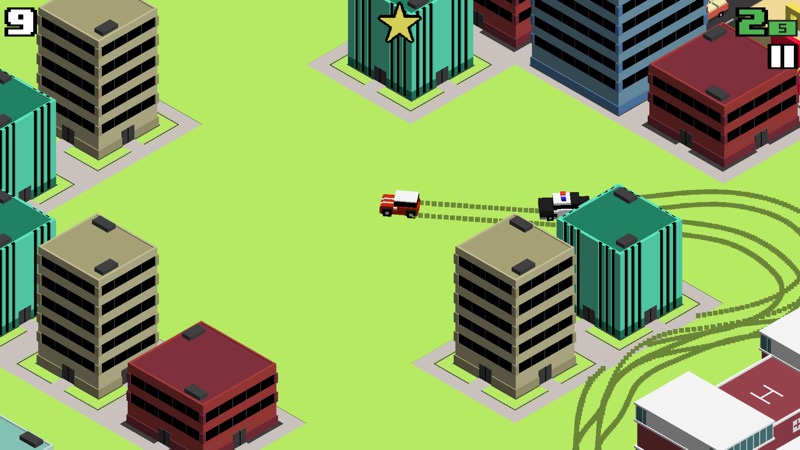 And then it's out into the isometric 3D world, with the game picking scenarios at random - this is urban, obviously, and I've veered miles off the main highway and so far have only one police car in pursuit. The tyre tracks are a bit over the top in terms of realism, but a nice touch in terms of the game. 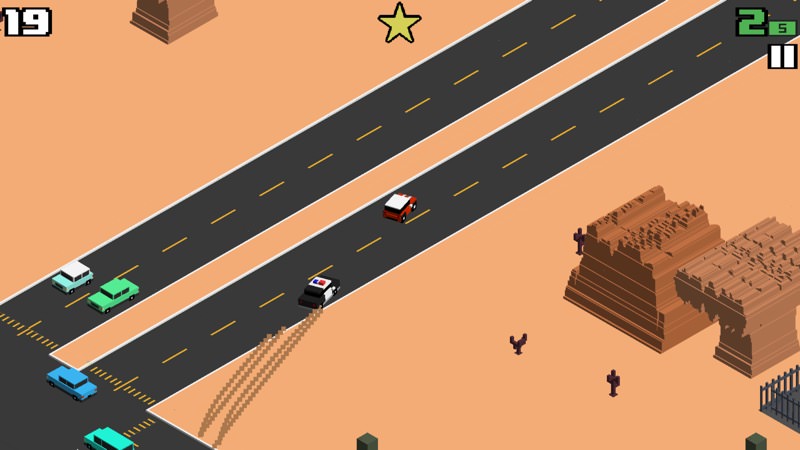 Here I am again - with the Mini! - in the desert, and about to veer off into an army training camp. The further you go in the game/level, more and more pursuit vehicles are mobilised until eventually.... 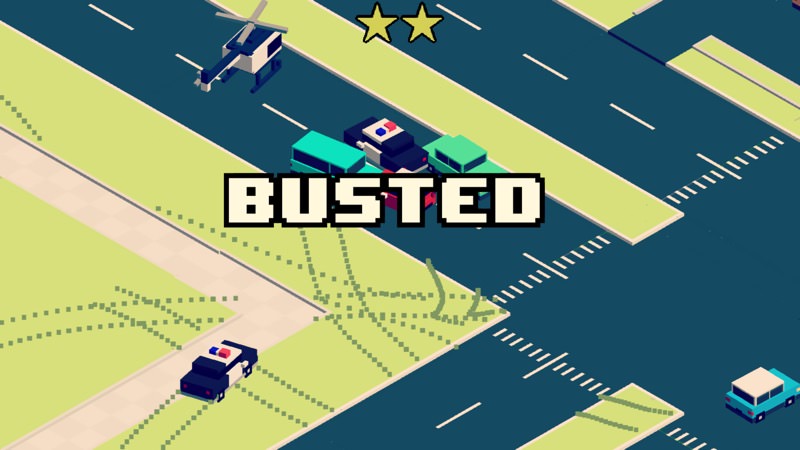 You're hemmed in after a particularly brutal crash. Nowhere to run, etc And a chopper hovering overhead. The physics of crashes is just right - you can smash aside small cars, you can bounce off lorries (or blow up a tanker, but then it's game over for your car too!), through fences, but - understandably - hit a building and you're stopped stone dead and it's time to reverse. 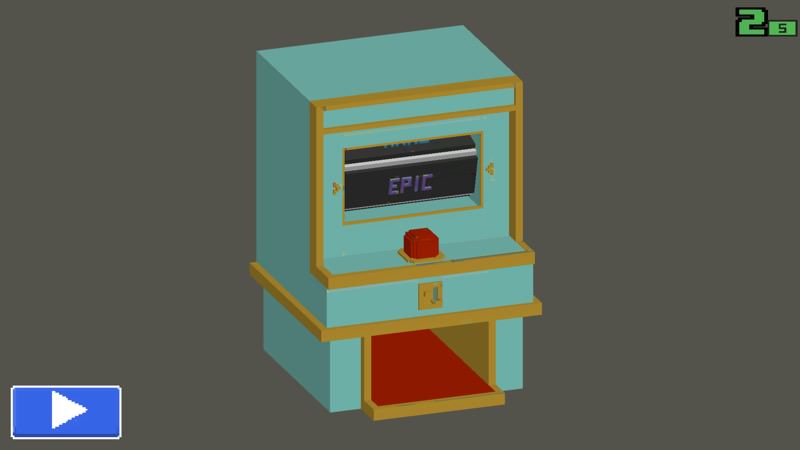 An intra-level fruit machine mini game let's you spin for extra rewards, including some of the lesser vehicles (that's how I got the mini!)... 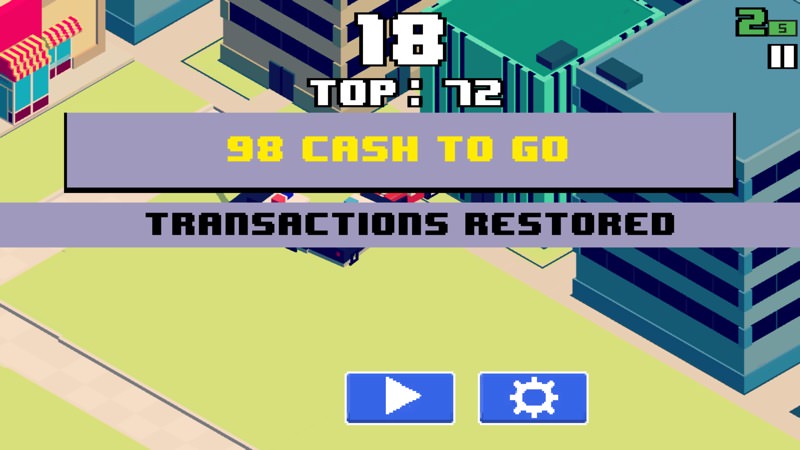 I've been stuck on '98 to go' for a while, so it's fair to assume that I've either got to win more new cars in the mini-game or - horror - dip into my wallet. At least there's restoration of purchases and game status from the Cloud, so you can have the same garage of cars in the game on multiple devices! 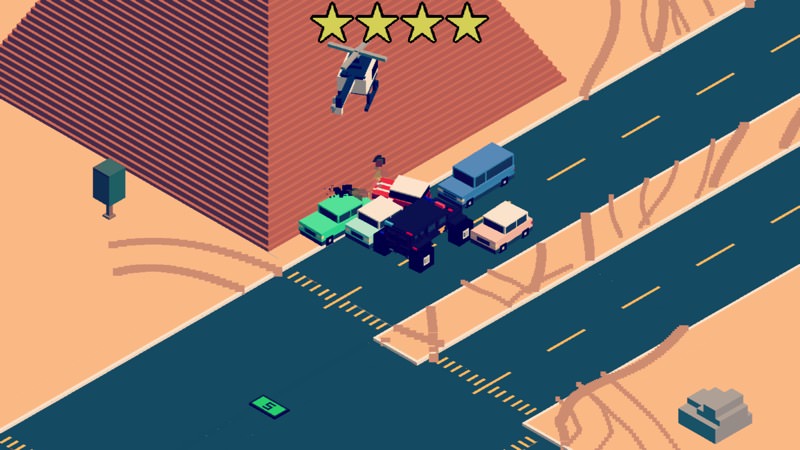 Busted again. Next to a pyramid - I told you the scenarios were a bit - though joyfully(!) - random. I was obviously too busy sight-seeing to see where I was going. Darn it, back to prison again....

I wouldn't expect most players to go for too many extra vehicles, especially at £3 a time for the bigger ones. Still, there's been some thought into all this and many extra cars are 79p/$1, so hopefully something for every wallet size.

You can grab Smashy Road: Wanted for free here in the Store. It's most definitely fun!