Although still, technically, in beta, Grover Pro was the most recommended title in my recent call for suggestions for podcatchers which work well with Windows 10 Mobile. And the AAWP community was right - Grover Pro is a terrific solution and gets closest of any of the apps I've tried so far to being a reliable, all-in-one solution. And, happily, a true UWP, working on Continuum too.

For the purposes of this review I've been using the paid/UWP/beta application, i.e. Grover Pro - this also works with Continuum, should you need to listen to (or watch) podcasts while hooked up to a secondary display. I was reviewing it on a Redstone-testing Lumia 950, but it should work just as well on any Windows 10-upgraded smartphone. The large-screen Continuum views also worked well, see the bonus photo at the end, below(!)

The unusual name apparently came about because it started off as Groove Podcast and modelled after Groove Music, but then there were worries over lawyers and the name got changed slightly. Groover Pro would have sounded too music-centric, hence the dropping of one of the 'o's! 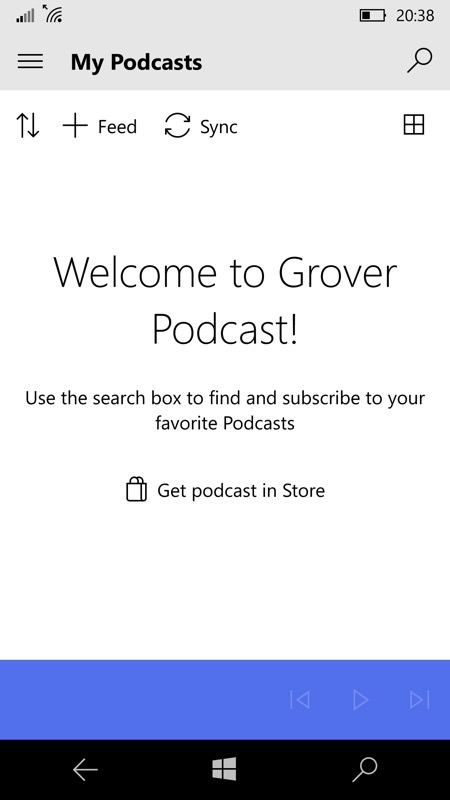 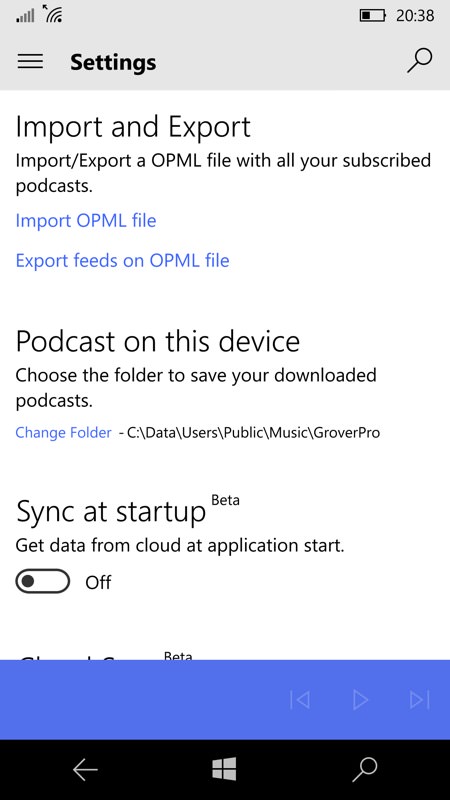 My (and, I suspect, your) needs for a podcatcher are fairly simple:

Everything else is a bonus, really. Paramount for Windows 10 Mobile is that the application should fit in with the UI conventions of the new OS and that it should be reliable, with no crashes, no errors, no glitches. Happily, Grover Pro manages to fulfill all of the above, and with a few extras on top.

Importing podcasts from an exported OPML file from another podcatcher (in my case BringCast) went smoothly (via OneDrive) - in fact, Grover Pro uses OneDrive quite a bit, using it to host configuration and playback files that it can use when using the application on another device (e.g. a laptop, loaded with Grover Pro [beta/UWP] or even the older Grover Podcast). The syncing is all labelled as 'beta' and it remains to be seen how this all works in a true multi-device set-up over many weeks and months, but so far so good. 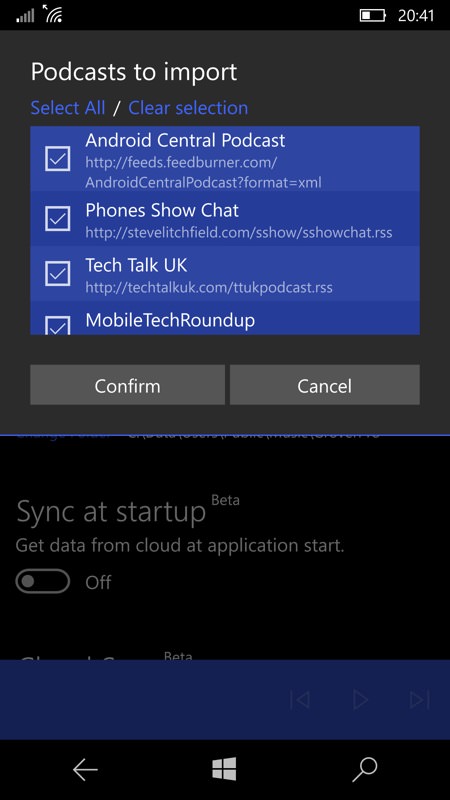 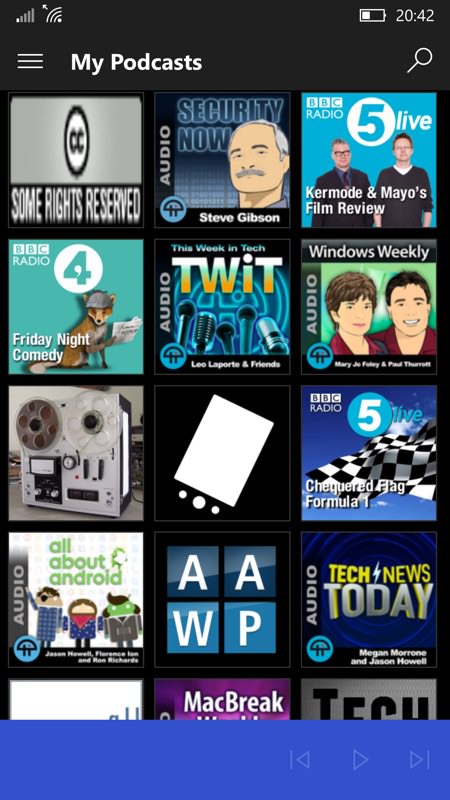 (The slightly non-optimised artwork in some of the screenshots here, by the way, is down to the podcasts and not Grover Pro!)

One of the nicest things about Grover Pro's user interface is that the main 'My Podcasts' view isn't necessarily alphabetical - you can opt to have it sorted by descending date of show publication, meaning that this view doubles as your 'what to listen to next' list. There are extra views on the hamburger menu, including 'Playlist', 'Unplayed' and 'Downloaded', but in every day use I found that simply picking the next thing I wanted to listen to from the main podcasts grid was perfect. (I don't tend to use playlists much in podcatchers - each show is already an hour or two long, and if I start stitching them together then I run the risk of falling asleep and missing something!) 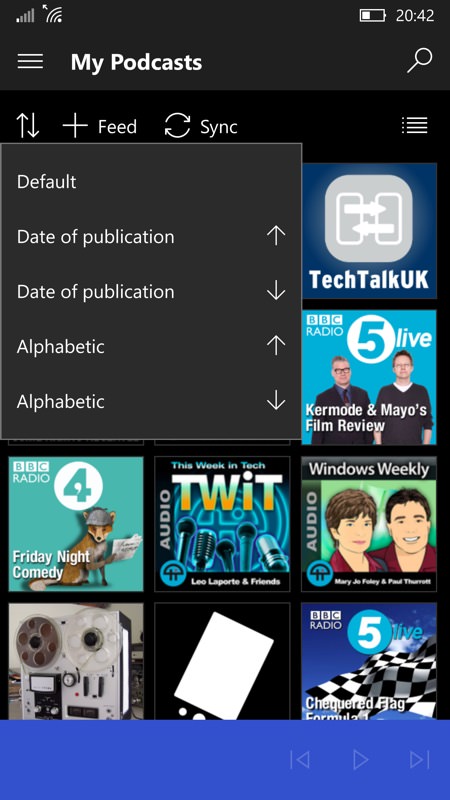 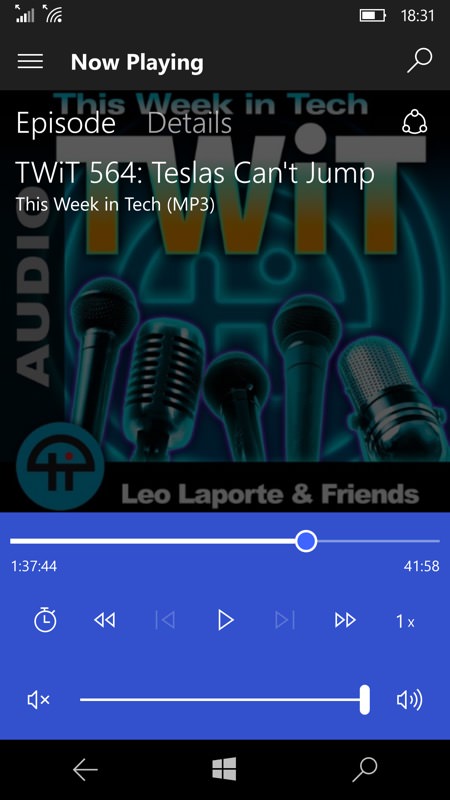 Although virtual controls are shown in these screenshots, Grover Pro is a full UWP with all the trimmings and you can swipe the controls away if you want to. Not that there's much point since you'll need them to get back to other applications soon enough. The playback controls are configurable in terms of skip (past ads) times and indeed whether they work within podcasts or between podcasts (I prefer the former due to the length of what I listen to!)

Of particular note is that there's a variable speed control, and implemented here rather elegantly as a slider, so you can tweak it precisely rather than have to live with a handful of presets (usually two or three in some other podcatchers): 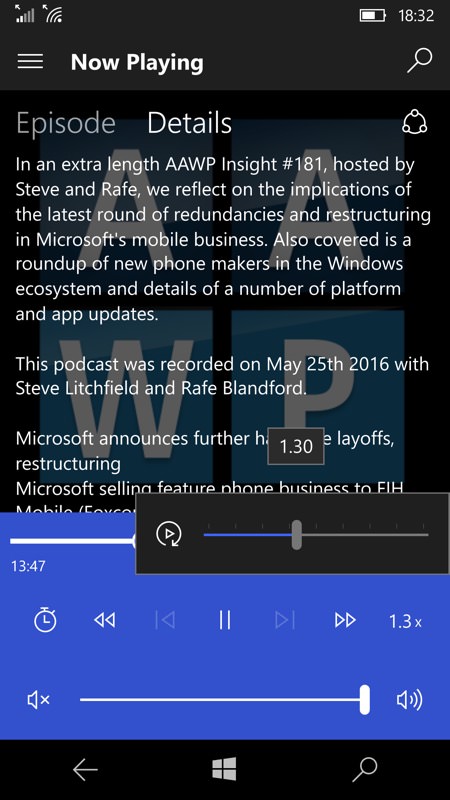 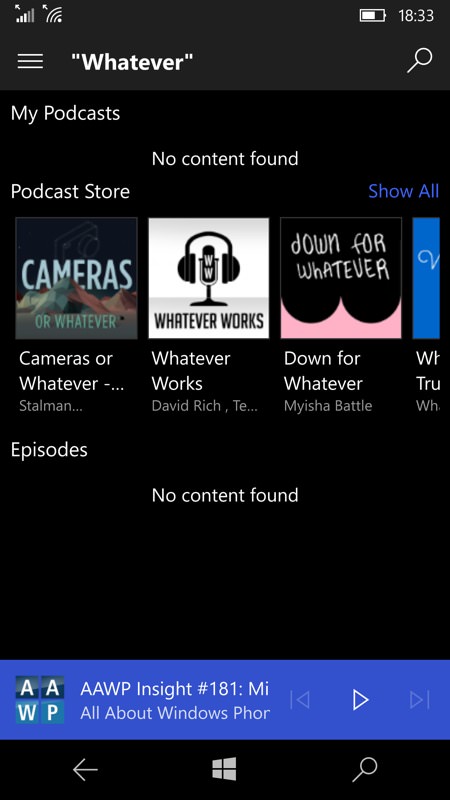 Searching is supremely elegant. The text you search for is matched against firstly podcast titles locally, then podcast titles in the (iTunes) Store and then against episode titles. So you don't need three separate search functions and can just type and (usually) find what you're after. In this case I was adding the new 'Whatever Works' podcast! 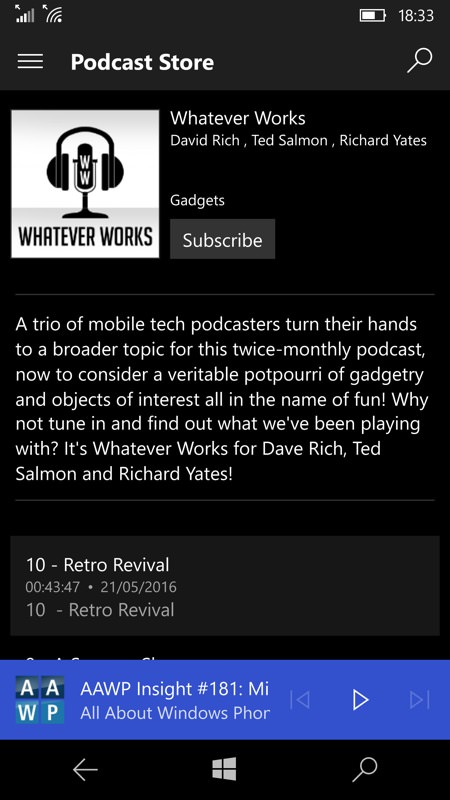 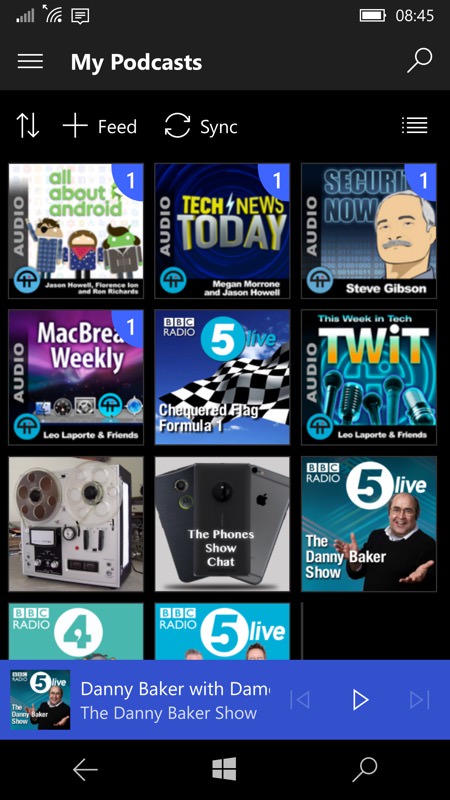 As new shows are available, Grover Pro scanes for them on your chosen update interval and then updates its main grid of thumbnails, as shown above right. There's a list view too, of course, but I found the grid so much more appealing and also useful, since I never had to swipe/scroll to find out what's new. The blue '1's above are, of course, the number of new, unplayed shows for each podcast. 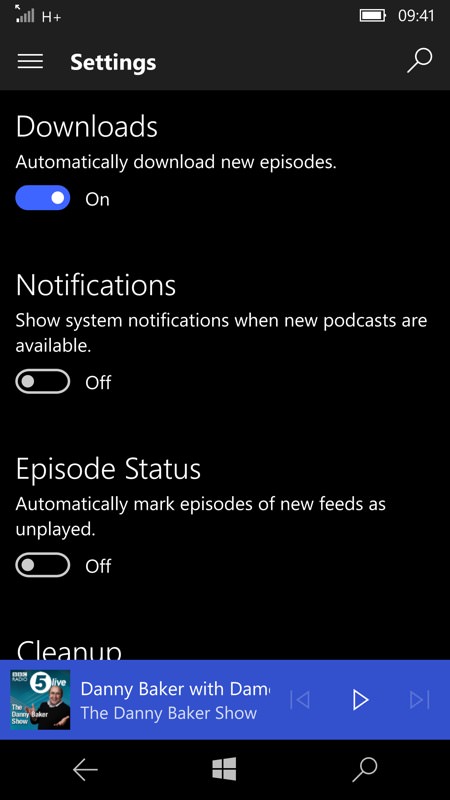 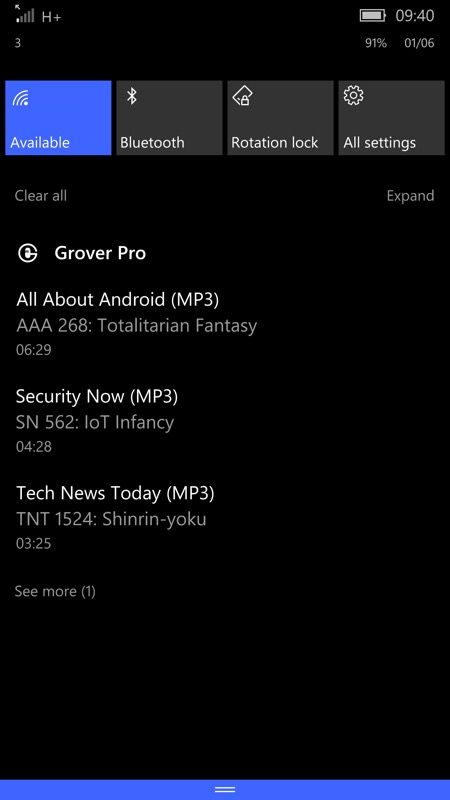 The sheer number of settings is a little overwhelming, but they're all nicely explained and laid out. Note the (unexpected) option to notify you via Action Center when a new show is available and downloaded (if you selected that 'auto' option, above) - I usually turn off most application notifications but in this case Grover Pro's announcements are rather helpful, perhaps reminding you that there's one of your favourite podcasts ready for listening on the way home (etc.)

The theme of the application changes through these screenshots, not because the application can't make up its mind, but because I found the 'Background' setting and switched it to 'Dark' so as to save a little power on the Lumia 950's AMOLED display! 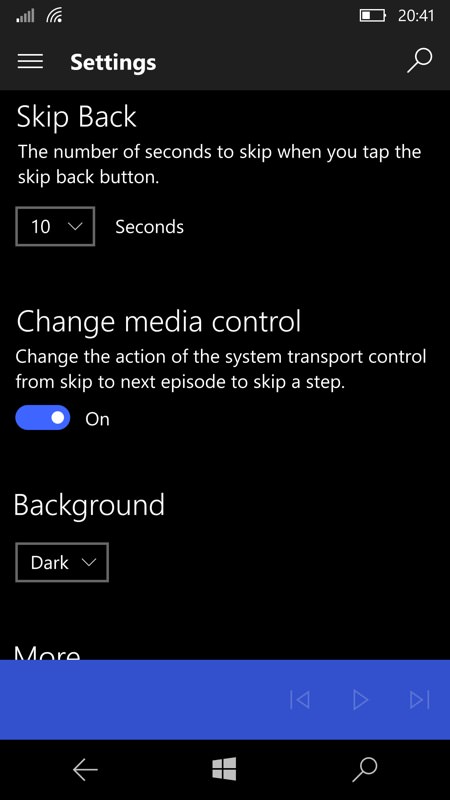 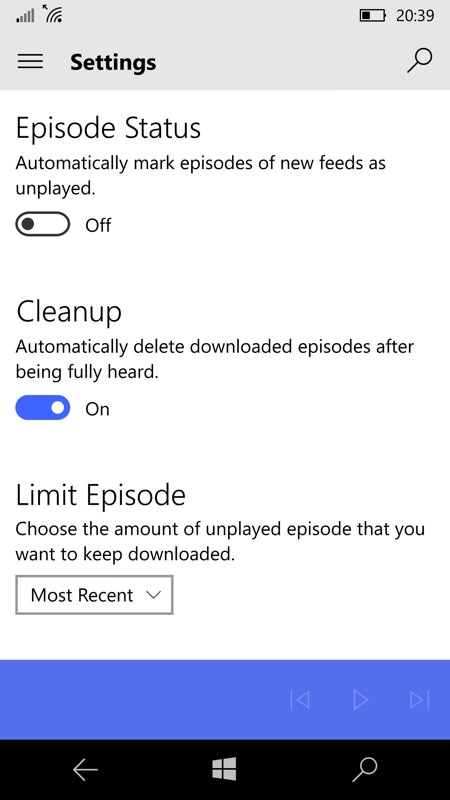 Grover Pro has hidden depths too - tap through to a podcast and then hit its Settings icon and you'll see that you can turn off auto-downloading and auto-cleanup on a per-podcast basis if required, which is a nice touch. Or just go with the defaults as I did! 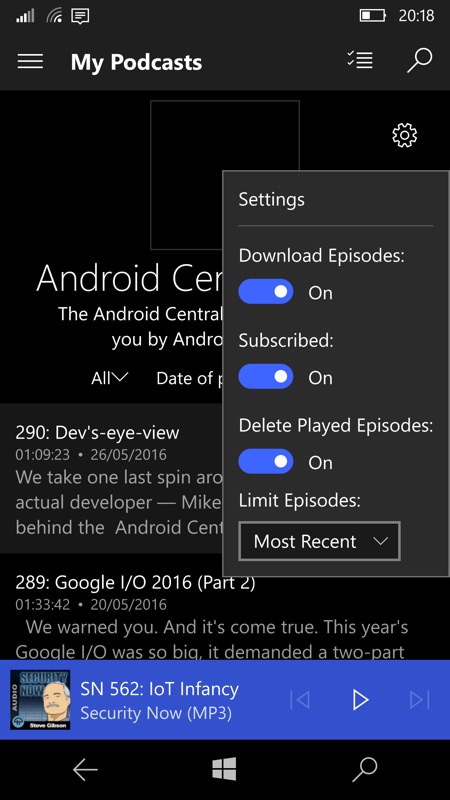 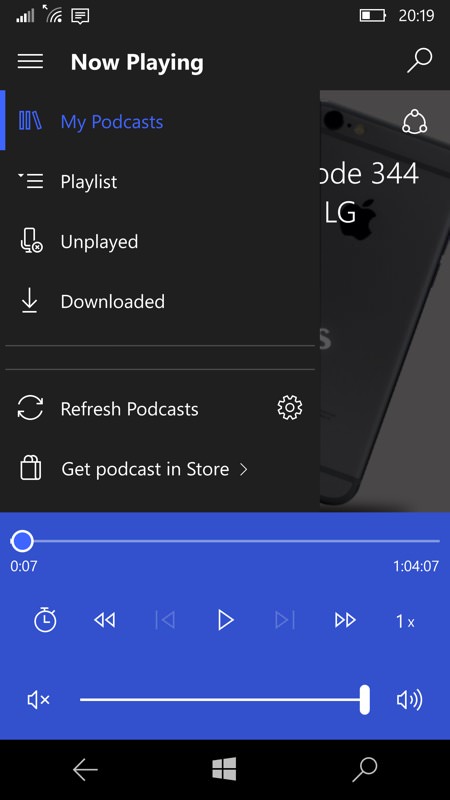 Making the most of the Windows 10 UI and thus working adequately on Continuum and laptops as well as beautifully on the phone (am I the only person who thinks that Windows 10's UI is at its best on a 6"-screened phablet rather than a 15" laptop?), Grover Pro is top notch from start to finish. And well worth the couple of quid's purchase price.

If I had any criticism it'd be that the auto-gathering of podcast programmes doesn't always work exactly as expected, but then we're also at the mercy of the whims of Windows' background agents and (in this case) at the mercy of the odd bug in Windows 10 Mobile Redstone itself. So it might not be Grover Pro's fault.

I'm sure I'll be revisiting podcatchers in this series of Windows 10 Mobile reviews, but the first out of the gate here might also just prove to be the class of the field as well. 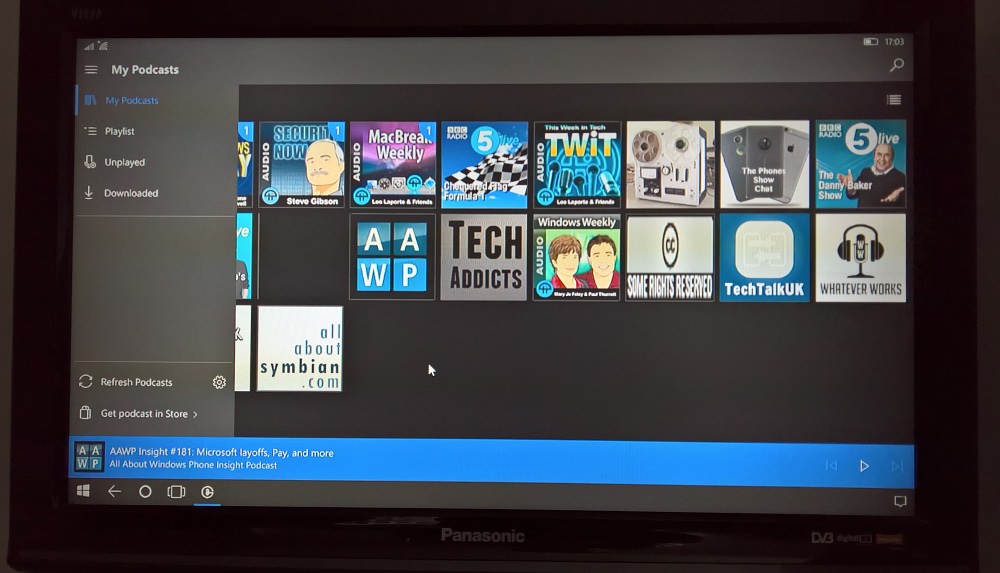