Back in the mists of time there was Pool Arena Online for Windows Phone - but times (and OSes) change and we're now in a Windows 10 (Mobile) world. The developer has reimagined the game as a UWP (Universal Windows Program) for both phone and laptop (etc), plus it has been expanded massively to include darts and (for now) a board game too. It's early days (how many times have I said that about such a title?) for what is potentially a large multi-player gaming system, but I do have a fondness for its ambitions.

In my years reviewing smartphone applications, I’ve seen this sort of thing before, of course. A worthwhile project (whether serious or gaming) but somewhat reliant on a large enough group of users to really get it going - a classic ‘chicken and egg’ situation, since if the project doesn’t attract enough committed early users then it will fail before it’s even really started. Hopefully articles like this one may help in the case of Pub Arena Online, though I got the feeling in my (admittedly early) testing that there were only a couple of people (including the developer) in action (in the UK morning). Still, early days, and see what you think - why not sign up (it’s free) and get involved? 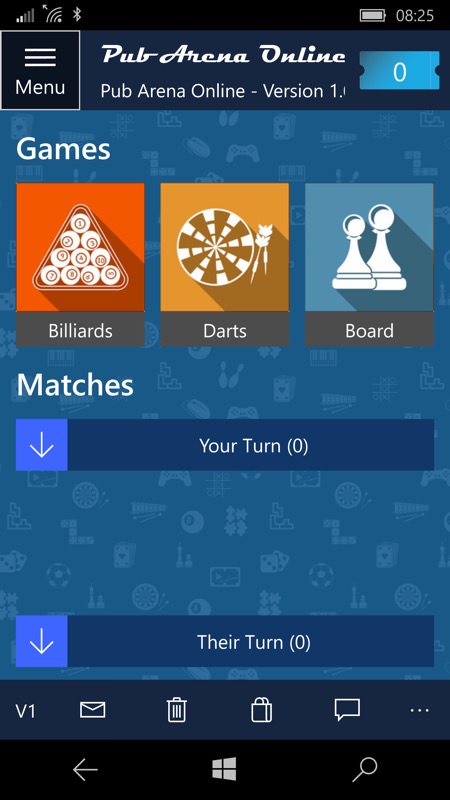 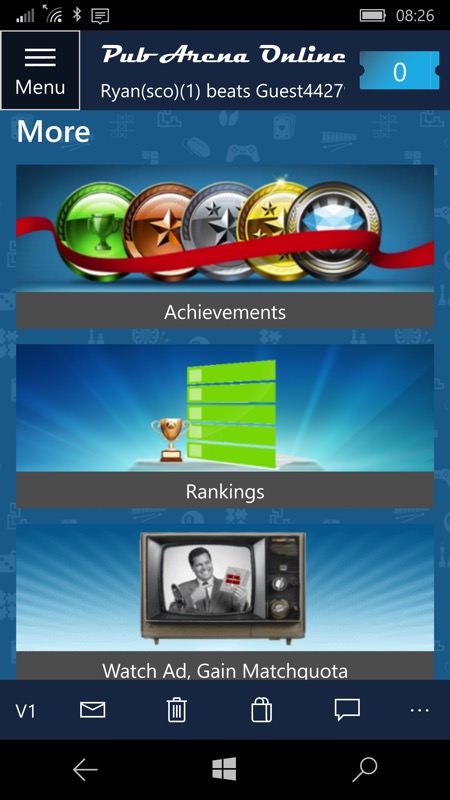 Getting started, empty turn lists and then swiping down the home 'pane' - plenty to fill in!

It’s not totally free across the board, of course. Once Pub Arena Online has taken off a little more then the various ‘competitions’ can come into their own - these involve a minimum number of people, an entry fee in terms of ‘tickets’ and then prizes to be won if you triumph. Tickets are Pub Arena Online’s in-game currency and are purchased with real world in-app-purchases,  though the price is kept reasonable and a 0.79p initial IAP gives enough currency for entry to ten of the minor competitions. Given that Pub Arena Online is in ‘beta’ still, giving everyone a bunch of tickets to start off with might have kick started activity, mind you? 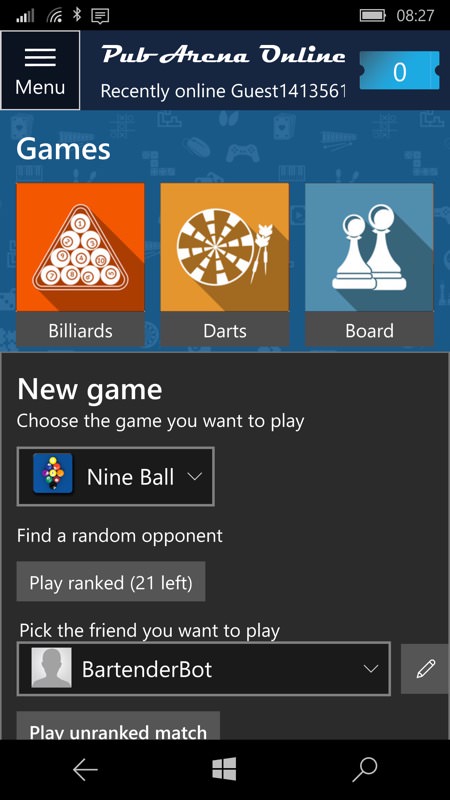 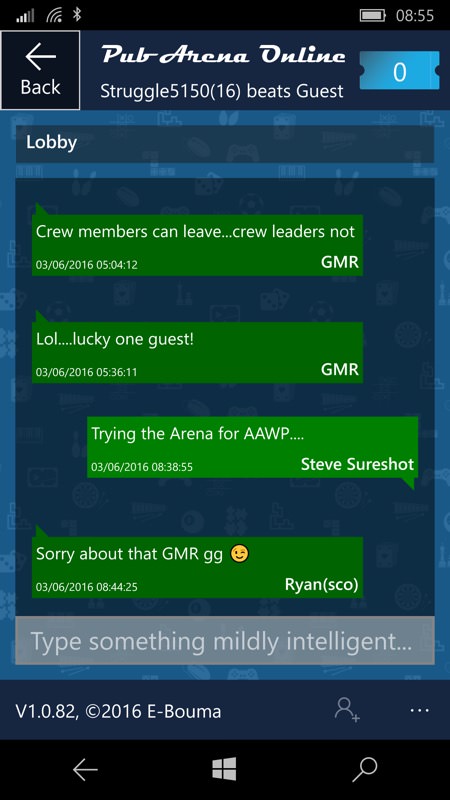 Kicking off a 9-ball pool match against the built-in AI, the BartenderBot; (right) the in-arena chat system in action, here showing the public lobby...

The core games are pool, darts and board games, with a number of variants. So you get 8 or 9-ball pool (or snooker), three different darts games and - well - only one board game currently, Connect 4, though this is set to be added to in due course. The games aren’t exactly fluid, i.e. they’d suffer if compared to standalone titles, but the point of each here is that they’re against someone else, a real person, and that (usually) there’s something at stake. (If you can’t find anybody to play from the ‘random’ selection then there’s a ‘BartenderBot’ to use as an opponent - he’s pretty rubbish as an opponent, but at least he’ll always be there. Expect more ‘bots’, too, in the future, hopefully with better AI! The pool interface, swipe to adjust aim, tap the cue ball control on the right to apply spin and then swipe down on the cue control to strike as needed - all a little coarse, given that it's 2D only, but still effective; (right) the darts interface, here in the middle of aiming my first dart in a turn...

The games themselves could certainly do with some more work - I was playing Pub Arena Online on a speedy Lumia 950 and there were occasional pauses in animation and gameplay. Balls in the pool and snooker games slide rather then roll, we’re not talking International Snooker Pro levels of realism by any means. Everything’s 2D and top-down and most shots have a healthy degree of ‘hit and hope’. While in the darts module aiming is done with the tried and trusted ‘time a tap’ to set both horizontal and then vertical aim - this works pretty well on the whole and I had more fun in the darts game than in the pool/snooker one. Meanwhile Connect 4 is as expected and no-frills. You’ve got to be patient with everything though. Pub Arena Online itself has interstitial ‘loading’ screens that you’ll see hundreds of times a day if you play a lot, while the very nature of the multi-player ‘turn by turn’ gameplay means that you’ll spend a lot of time waiting for others to play. In an ideal situation, you’d have four or five pool or snooker games on the go and half a dozen darts or board games too. When it’s your turn to play, you’ll be notified in Action Centre (if you’re not in the game already) or in the ‘Your turn’ section of the Pub Arena Online home pane. With enough games on the go, you can flit from one to another and hopefully not have too much downtime in between. Here's how Pub Arena Online notifications appear in Action Center. Interestingly, I don't think you can turn them off in the game itself - but then they're kind of essential to the turn by turn gameplay; (right) reviewing some of my past games - and you can tap through to see the last moves/turns/status if you like.

The whole system does work, though. A ‘chat’ system allows a real time stream of messages from online players, a ‘message’ system shows communications and confirmations about your activity, while you can search for friends by their nickname and add them to a trusted stable of people to challenge to a game of something. There are only three in-app-purchases and they're all reasonable, enabling you to enter competitions in the game and err... 'win big'! (right) well, I blew my shot at double 10, and I'm now waiting for the BartenderBot to try double 17. Logically, it's a real 'bot' and is server side, so AI response isn't instant. Not sure if that's good or bad!

When notified in Action Centre, tapping through to the game doesn’t immediately show whatever you were notified of (e.g. your turn in a game), you have to wait a few seconds for this to show up in the main pane, but let’s be generous and remind everyone that Pub Arena Online is still in beta, and therefore can still be tweaked in terms of refresh rates and settings. Having been notified of it being my turn in a game against the developer ('GMR') in Action Center, switching through to the game shows nothing at first. Then, wait a few seconds and up it pops, as shown on the right...

There’s clearly potential here. Optimise the games for speed and responsiveness, improve the AI of the bots, eliminate (or hide) the loading screens, add more board games (which suit turn by turn play better anyway), kick start activity in the competitions, and so on. That’s admittedly quite a to-do list for the developer, but I’d love for this to take off. See what you think and add your comments below. Ah yes. 'Loading'. This HAS to be optimised away, plus any delays hidden with a transition or something. Anything; (right) starting off looking at the tournaments, but as they only kick in with lots of player with lots of tickets, I'm wondering why the developer doesn't kick start things with a bunch of free tickets for everyone in the beta period?