'Hack and slash' may seem like something of a gory game genre, but when it's depicted in 2D silhouette fashion and with cartoonish 'stickmen' then somehow the extreme violence seems more palatable. Not quite freemium, not quite combat, not quite a platformer, League of Stickmen is certainly a bit different...

THEY CAME FROM THE SHADOWS - in just a few short and terrible days, the Shadow Minions overwhelmed humanity’s greatest cities and plunged the world into darkness. But as mankind’s last rays of hopes were swallowed by the swelling tide of Shadow Minions, a secret alliance of shadow stickmen were roused from their slumber. Ancient warriors, sworn to do battle against the Shadow Minions were raised from the same darkness, weapons and magic in hand. The League of Stickmen bands together once more to banish the Minions to the shadows. The time has come to defend humanity, and to restore order to the world.

So you get the idea. You're playing as one of the hero shadow 'stickmen', slashing and casting power-up weapons in a 2D world against enemies which seem to keep rising from the ground (and the dead). The graphics are gorgeous and the soundtrack somewhat overwhelming - listen with headphones for best effect. Try the game with your phone speakers on and the whole household will hear the carnage even with your volume set down low! 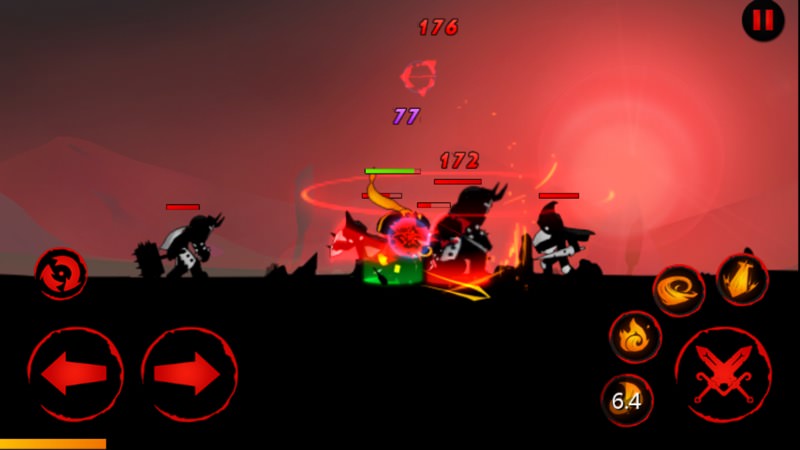 Control is via a set of red neon touch icons: left and right to face the other direction and move (e.g. to get an enemy into slashing range), slash to swipe viciously with your sword, and then four power-up weapons of varying effectiveness - each has a timeout associated with it so that you can't keep on using it continuously.

As you progress through the levels, you unlock new stickmen warriors: 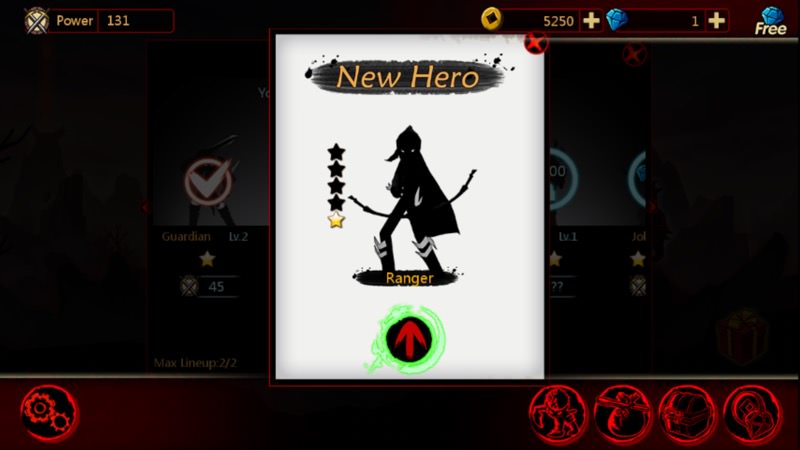 And while you then play as these new heroes, the others continue to fight, under AI control, think of these as 'wingmen'. With multiple heroes and enemies on screen at the same time, the action can get a big hectic and hard to make out, but it remains great fun at all times. And somewhat addictive.

One nice touch is that, RPG-style, slain enemies drop weapons and defenses and these can be run over and collected, adding to your own arsenal. 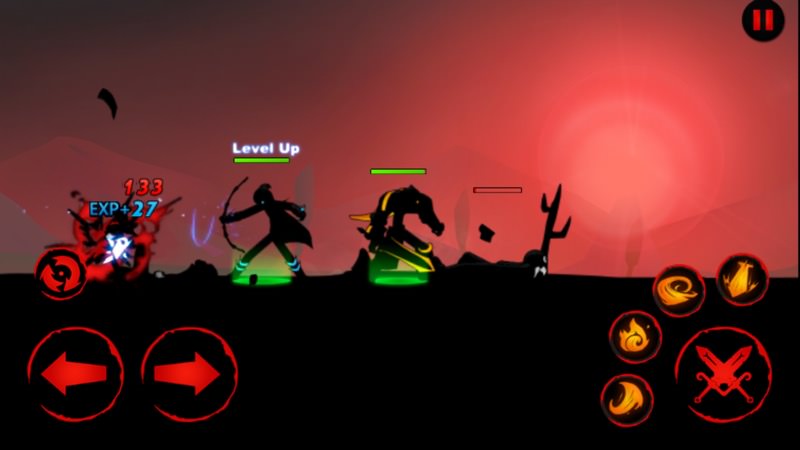 The various weapons can be tweaked and armed/upgraded before each level and these all cost one of the two in-game currencies (for the umpteenth time, can someone please explain to me why these titles always seem to have more than one currency??!) 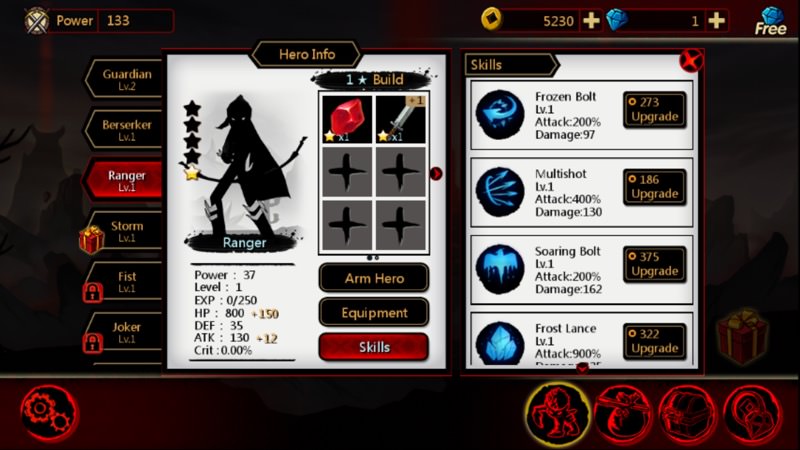 To be honest, the wealth of heroes, armaments and abilities to start to overwhelm, but for most people you can get by with just taking defaults, upgrading everything and hoping for the best. In a sticky spot, summon up one of your bigger weapons and then sit back and watch the carnage for a few seconds... 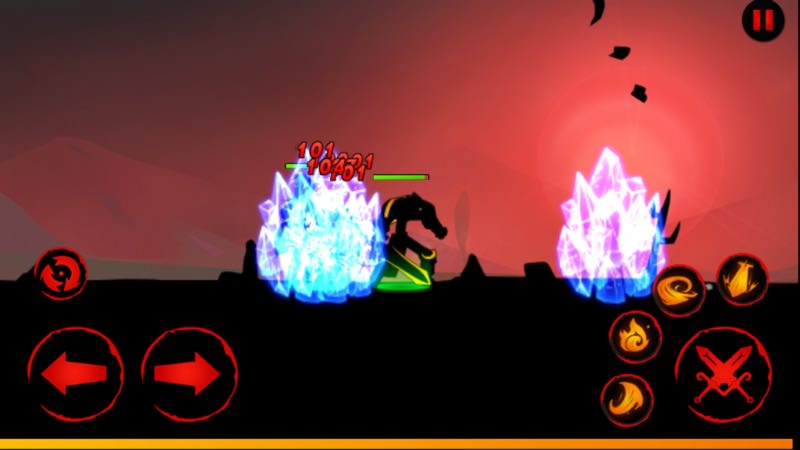 Part of the reason why I'm giving League of Stickmen page room here is that it has a twist on the usual payment mechanics. Rather than going full commercial or full freemium, it strides a middle ground, with a $1 (or local equivalent) up front purchase fee and an (innovative) one-off currency pack purchase in the game, another $1 (etc.) Effectively putting the price of the game at $2, which is very reasonable. You can in fact, get quite a way with just the initial purchase, but the extra currencies will help you get the bigger weapons much more quickly and you'll have more fun. 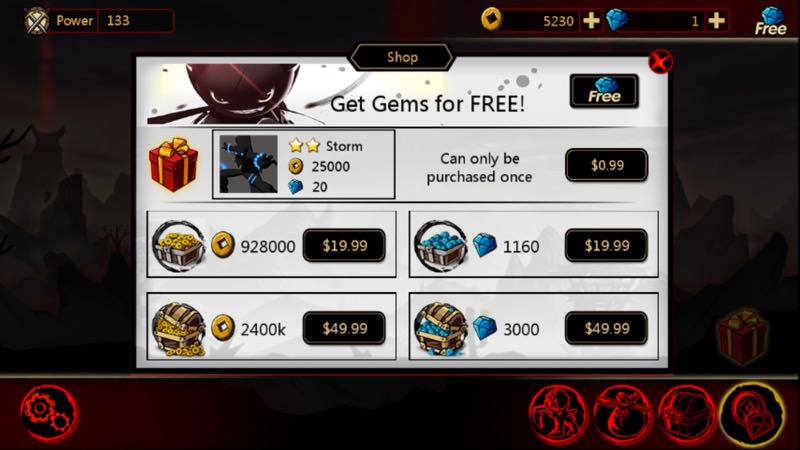 And, for most people, that will be it, though the developers do offer some outrageous currency packs for those who are either super keen on the game or who have more money than sense), and the uppermost of these do stray far too far into 'crazy' territory. Let's have less of this please, developers. I'd still like in-app purchases for games capped at something sensible like $20.

There's some imagination here though, with lucky treasure chest packs and you never know quite what you'll get: 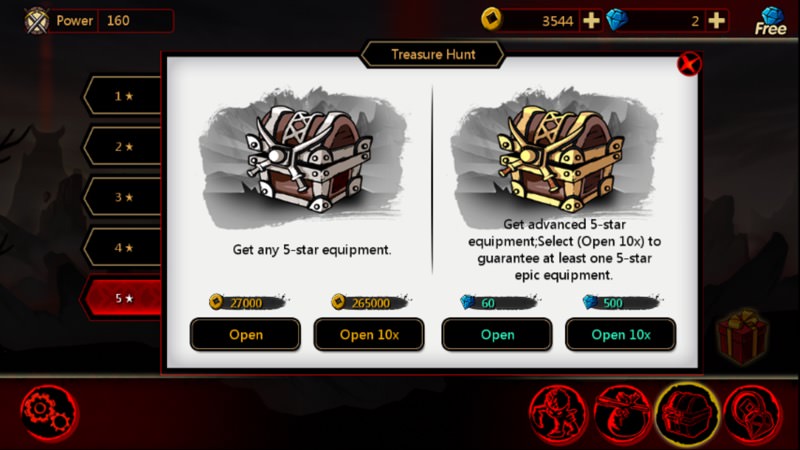 Getting a solid ten out of ten for atmosphere, League of Stickmen straddles numerous game genres with consummate ease. Ultimately, for most players, it's not that much more than an arcade diversion, but there's a little more depth here for anyone with good reflexes and time to really study what's happening on screen.