It's great having the likes of Audible on Windows Phone and Windows 10 Mobile, serving up audio books in an automated (though paid for) fashion. The new version of 'Audiobooked' is also rather interesting though, in that its new version is a full UWP app, in the same way as Audible. But unlike the latter, the idea here is to handle audio books that you source yourself - perhaps paid, perhaps free, perhaps even home-grown. 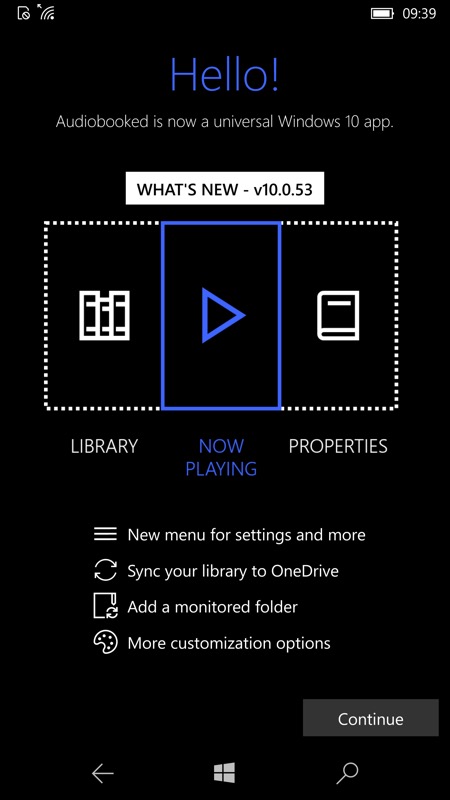 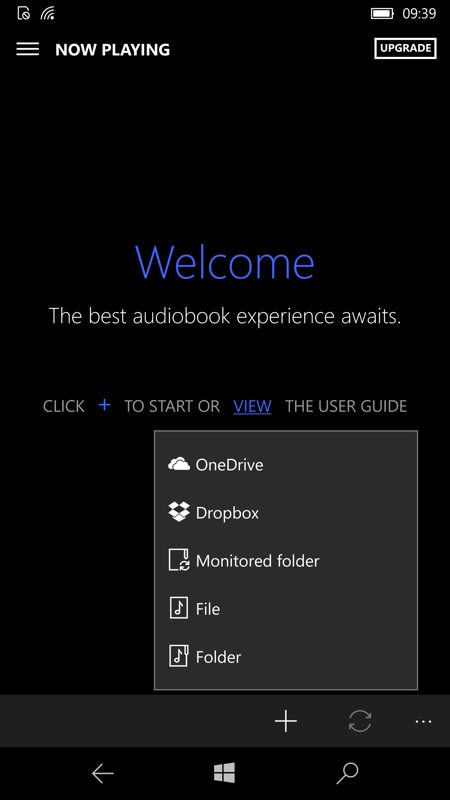 There has been a lot of work put into Audiobooked over the years. A lot. It's amazingly mature, in that the 'onboarding' experience for new users is damn near perfect. An introductory help screen is just the tip of the iceberg - tap the '+' control and you're offered various places in your local and online file systems to look for audio books, as shown above, right.

But there's a lot more. Having selected your source (in my case OneDrive), specific instructions are offered up, along with tech insights and file format compatibility notes (below, left) - tap on the 'next' control and you're automatically signed in and picking files or folders, as required. In this example it's an abridged sci-fi book from the BBC, broken up into major one hour sections: 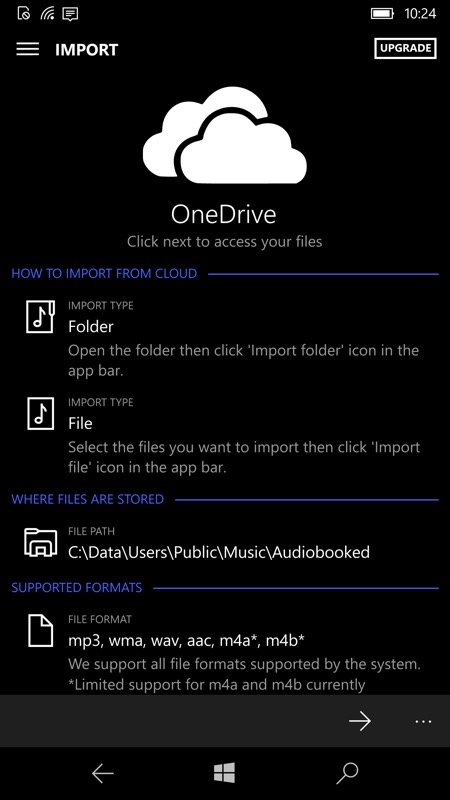 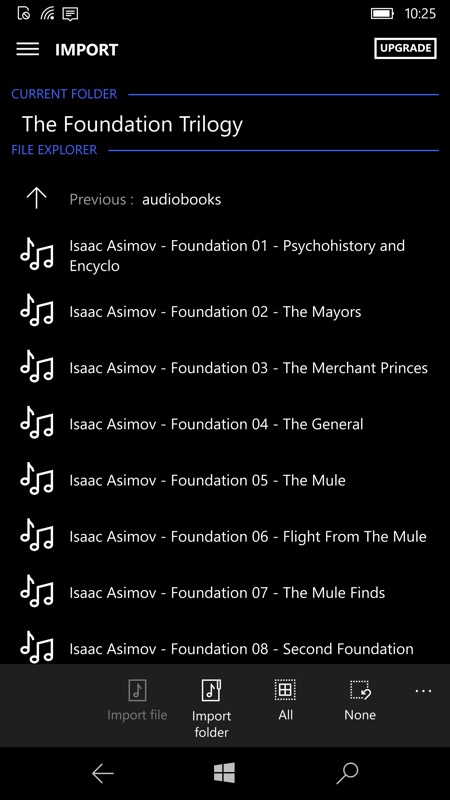 By default, audio book folders are rolled up into one 'book', rather smartly, though you can uncheck the default option and leave a folder of audio book files as individual entries if you prefer - it all depends on what the content is! 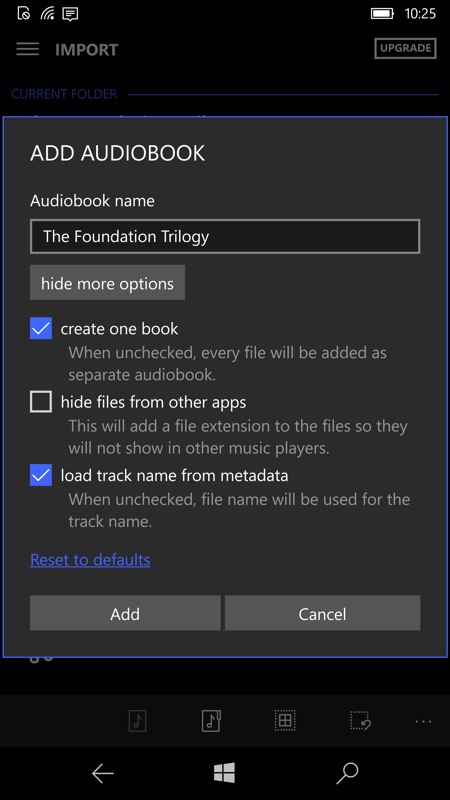 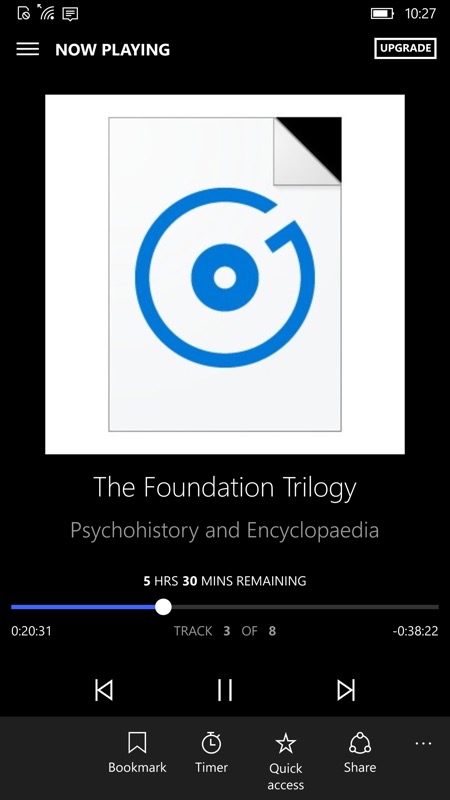 When playing, any embedded artwork is shown (mine didn't have any - maybe it's too old!), along with a typical Groove Music/W10M-style interface - swipe to the left side to see your library (or use the hamburger menu, not shown here) or swipe to the right to see technical details of the audio file being played. 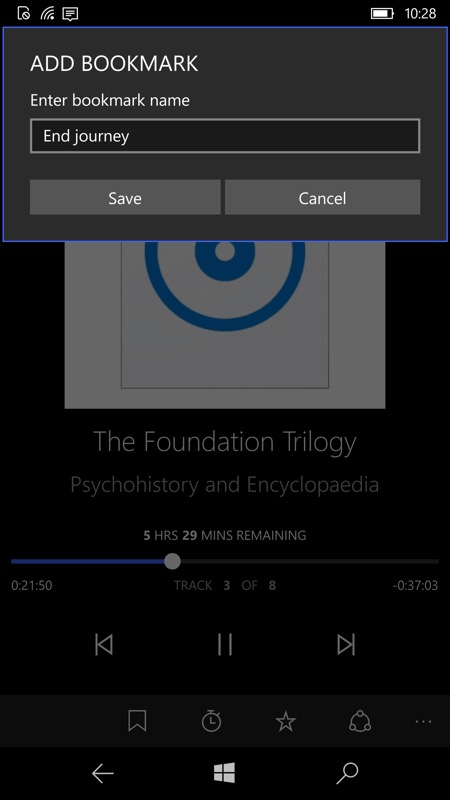 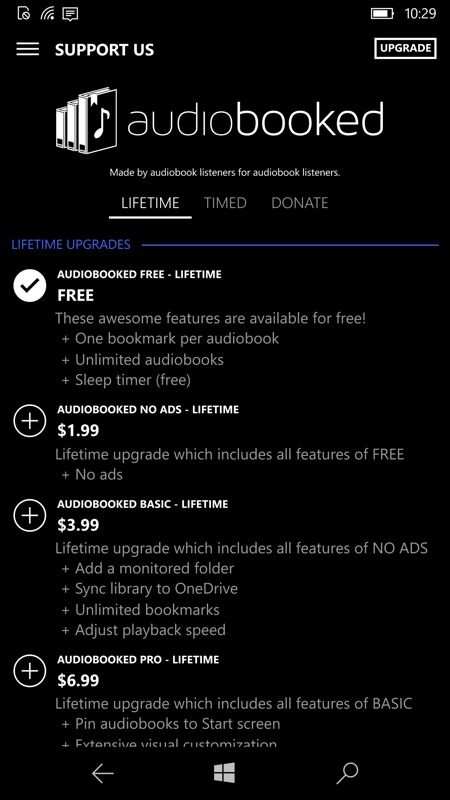 Adding a bookmark while playing is trivial, though note that the free version of Audiobooked only allows one bookmark per book. This is part of the carefully thought out freemium model here - it has been very well done, with a choice of lifetime and time-limited plans, as shown above, right. Most people serious about listening to audiobooks will probably head for the $4 lifetime plan, at least, giving unlimited bookmarks and the all important playback speed control.

Curiously, the playback control isn't greyed out in Settings on the free tier, but then neither does it work - I'm assuming that paying up (i.e. consider the $4 the real 'price' of the application, quite fair enough) will get this feature working properly, to speed up or slow down audio books that you either want to hurry up or savour... 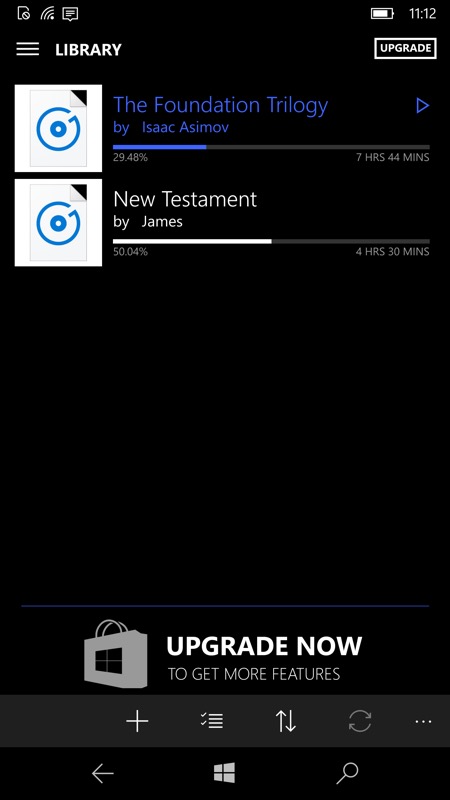 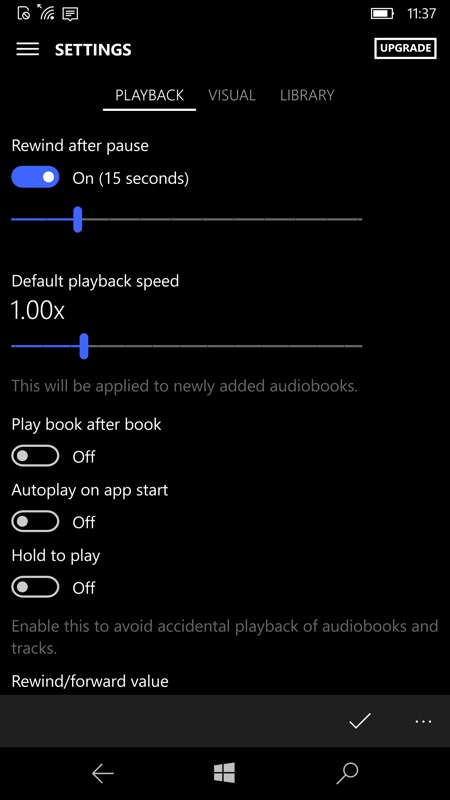 Again the maturity of Audiobooked shows through, with the delightful, explicit option to customise how far the audio book is rewound after you pause and resume (i.e. to remember context rather than just jumping straight back in). Not shown here but also impressive are the visual tweaks, from theme to UI element sizes.

Here are two more of the UI views in Audiobooked, showing statistics and the 'track' listing within the current (composite) book: 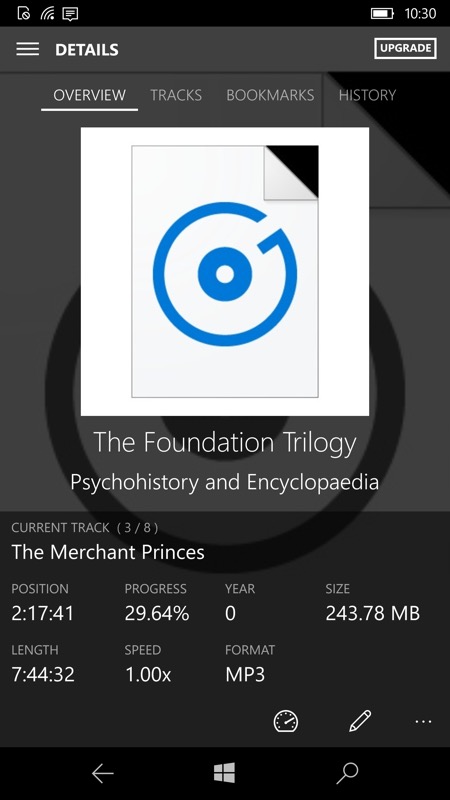 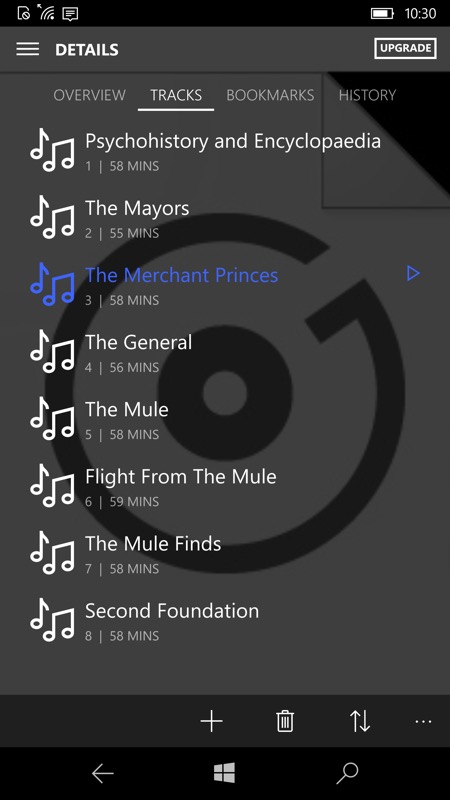 Slightly oddly, although being a full UWP app and supporting Continuum and Windows 10 PCs/tablets as well, the developer hasn't enabled landscape mode yet, which is why all the screens here are portrait. No doubt that will come. In the meantime, here's Audiobooked running on a connected Continuum display from my Lumia 950 XL, just to prove that it all works: 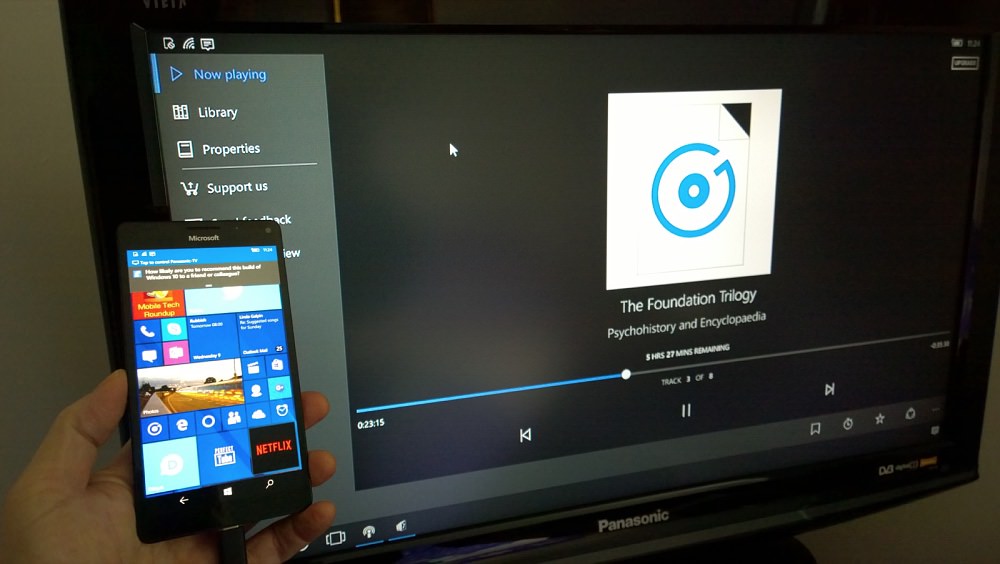 So the application itself is sound and proficient, and not overly expensive (plus many people will get by with the free version anyway) - the biggest FAQ by far is how do you get hold of free audio books online? There are, in fact, dozens of good sites/sources, but use this guide as a starting point.

Audiobooked isn't a wholesale replacement for Audible, since the latter has all the latest and heavily copyrighted content, but if you have amassed (or are amassing) a library/archive of more legally copy-able (i.e. DRM-free) audio then Audiobooked is a terrific player and browser.