Yes, yes, it's true that the game's name includes '2015', but look past any worries over the title being 'old' because it's certainly not. Avion Flight Simulator 2015 is the most challenging flight sim game that I've played for ages on a phone. With a choice of three flight models and surprising variety in terrain and weather, the 'just one more challenge' gameplay is absolutely addictive. NB. This is a 2021 re-review, since I've been playing - and enjoying - it all over again! 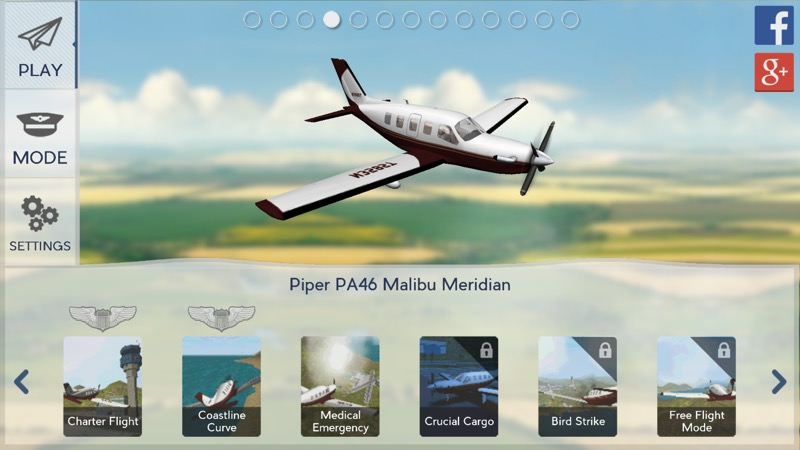 Avion Flight Simulator 2015 is free to download as well, the idea being that the interstitial full page ads between missions will keep the developers fed and watered. I think they're wrong and simply find these ads annoying - yet there's no way to remove them - I'd happily have paid £2 to £5 for an ad-free experience. In theory, the ads (not shown here) can be dismissed easily with a single tap on a 'x', yet I got caught out a few times tapping too early or late and ended up in Edge on a web site - this isn't a good experience. And then there are the ad loading times, sometimes up to five seconds, while the player is shown a black/blank screen. Argh!

At this stage in 2021, there's zero chance that Seven Summit Studios are paying attention to Windows 10 Mobile, so there's no way to give them some money and never see ads at all. Oh well. Consider the ad breaks a moment to catch your breath in between all the stress of the flying missions! 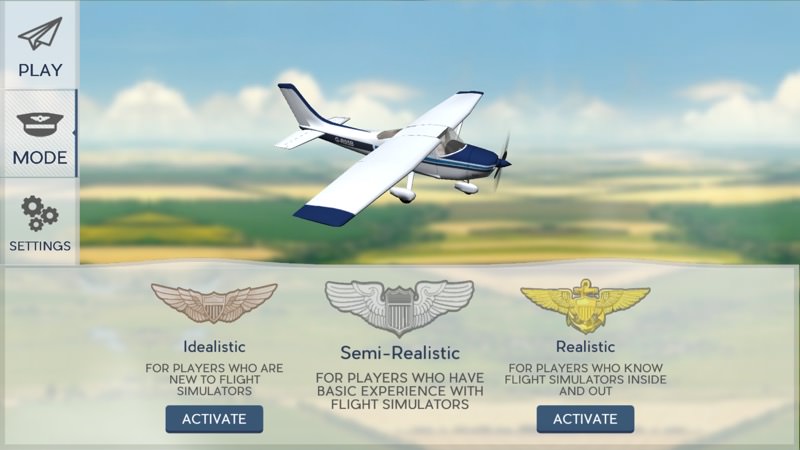 The actual flying experience is top notch. There are currently twelve planes in the game, with very varied characteristics and planned missions, and more planes are planned for the future. The addictive nature of the game is because you get half a dozen challenges/missions for each plane - and, crucially, you have to complete them all in order to unlock the next plane, and so on. Which means that, with your eyes on the Boeing 777 and Su-33 as the eventual prize, you have to get stuck into completing missions in less capable aircraft. As you (usually after a few attempts) land a plane to successfully complete whatever the current mission is (e.g. 'Deliver supplies to airport X - and get diverted by a medical emergency to airport Y'), the 'Continue' button takes you immediately into the next mission/challenge, you're on the runway and engines are spinning. Which means that you're tempted to 'play just one more mission'. And so on. 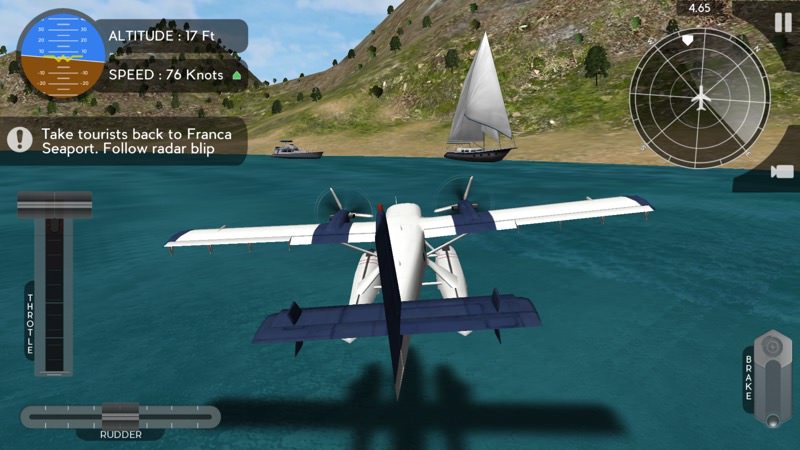 I just spent four straight hours in Avion Flight Simulator 2015 and I'm only four planes into the 12. Extrapolating, that might be twelve hours of involving gameplay for, here, absolutely nothing. I.e. free, with just ads to dismiss every now and then. 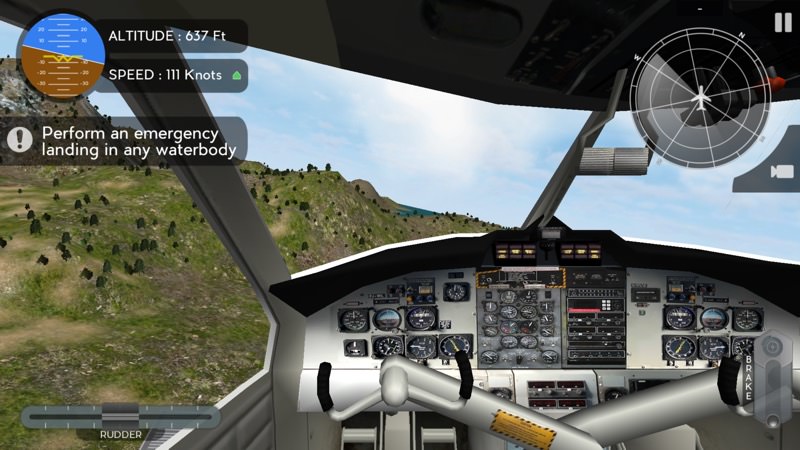 Aside from the appropriate nature of the challenges (depending on the aircraft), and the occasional night time flight in bad weather (just stunning, with lightning flashes, etc.), the most surprisingly satisfying aspect of the game is the ultra-realism in terms of sound and feel. Some flight sims put forward a smooth, clinical feel, where you never feel like you're in any trouble - Avion Flight Simulator 2015 puts effort into its sound and graphics to emphasise the perils involved in flying. As an example, in some of the earlier and flimsier airplanes, you'll hear and see evidence of the airframe rattling and shaking under the stresses of take-off, in stormy weather you'll get buffeted around in the air, and so on. It can feel quite dangerous at times - which is exactly as it should be. 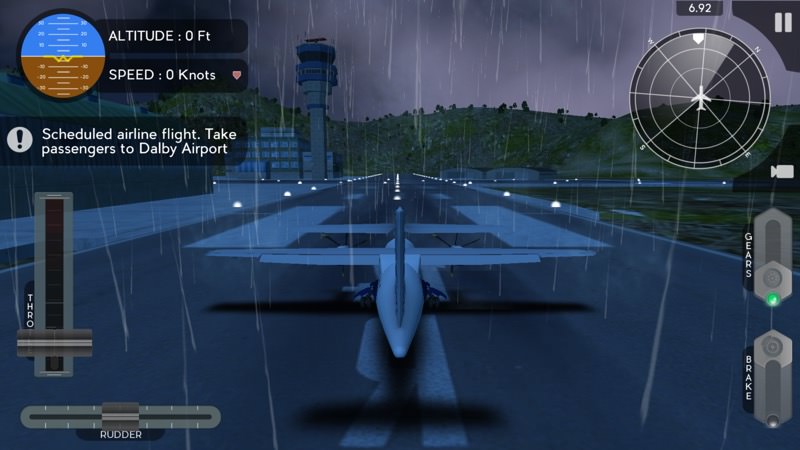 The missions are all relatively short, despite being in 'real time', since the airfields are all close, a matter of tens of (simulated) miles, rather than hundreds. The textures and scenery are all first class throughout, powered by the popular Unity engine, of course. Camera angles are limited to three - in cockpit, from behind/above, and with an arty fly-under, though you do get extra angles as needed when you crash, land or achieve your objective for that mission. 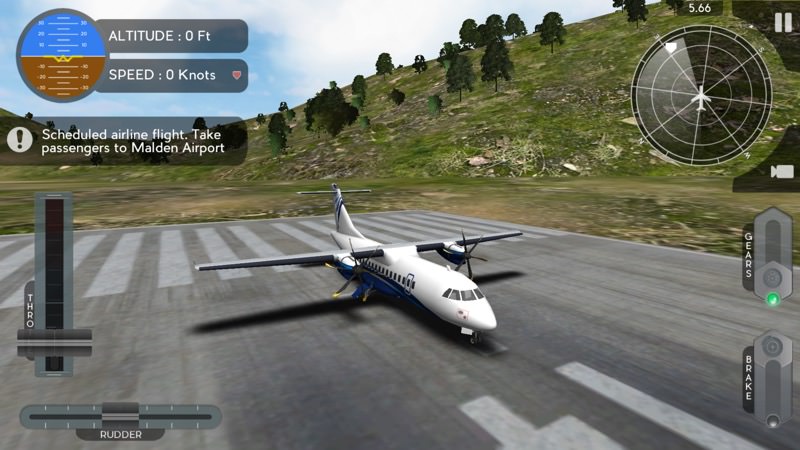 You can swipe to pan around in the cockpit and fly-by views, which can be fun every now and then but doesn't really get you anything new - for example, you can't fiddle with virtual controls. The actual controls are nicely done though, with accelerometer for all joystick functions, with rudder (and flaps too, in the full-on 'realistic' mode), throttle, landing gear and brakes. 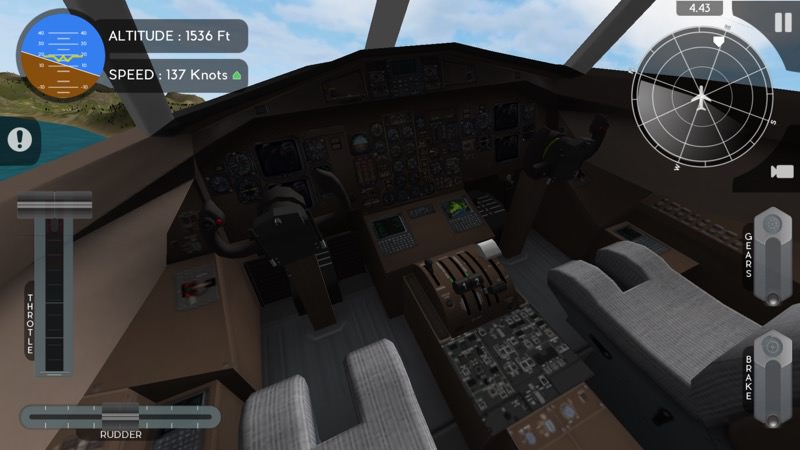 The 'radar' view shows the way to whatever you need to do (e.g. land/rescue/survey), along with a distance indicator, though there's no help as to the alignment of runways when you arrive, leading to often having to do something of a fly-over and then a partial circuit in order to get lined up properly. A bit of clarity on the radar would help a lot here. 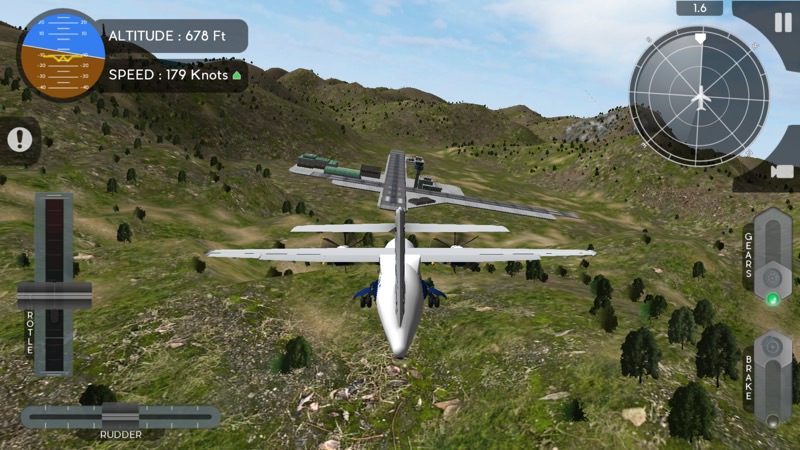 One of the nicest features, and one which helps with the 'keep on going' game flow, is that if you do crash you get four chances to 'rewind' per mission attempt, taking you back 2, 4, 6 and then 8 seconds in turn, giving you a chance to re-do whatever you got wrong in the approach without having to do the whole mission again. A lovely touch and one which I haven't seen implemented as well in any other mobile flight sim. 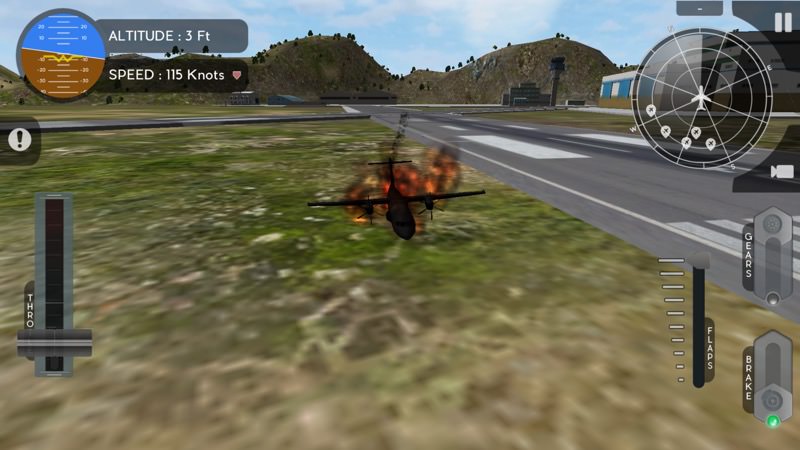 Eventually you'll work up to the magnificent Su-37 fighter bomber, but don't get too excited, there's no actual combat or indeed involvement with other planes or ground traffic - Avion is all about the purity of flying. In all types of planes, across all terrain, in all weathers. Still, the developer has used quite a bit of imagination to still give the likes of the Su-37 something to do - see the missions in the screenshot below: 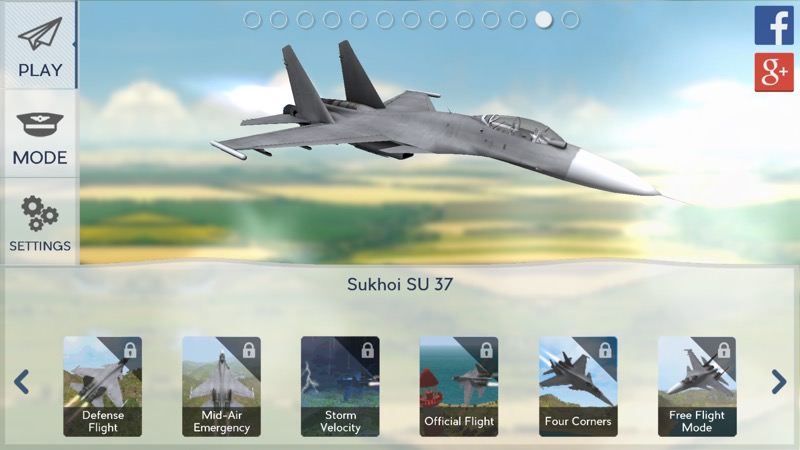 Mid-air emergencies are a staple of the missions for each plane, with rudders, engines and even landing gear failures - and you've got to recover, performing emergency landings as needed. These will test your feel for landing speeds and how far you can bend the rules of flight physics when the chips are down. Never mind Sully and the Hudson, you'll be hailed as a hero by your virtual passengers every time you succeed here in just as dramatic surroundings(!) 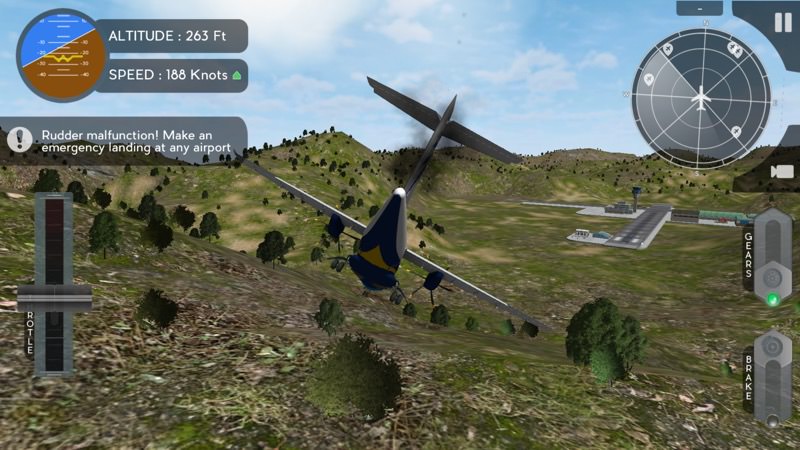 Visual and realism touches delight throughout - for example, the runway lights when landing at night, standing out dramatically when you're flying in a storm, a beacon of refuge and guiding you in, as shown below: 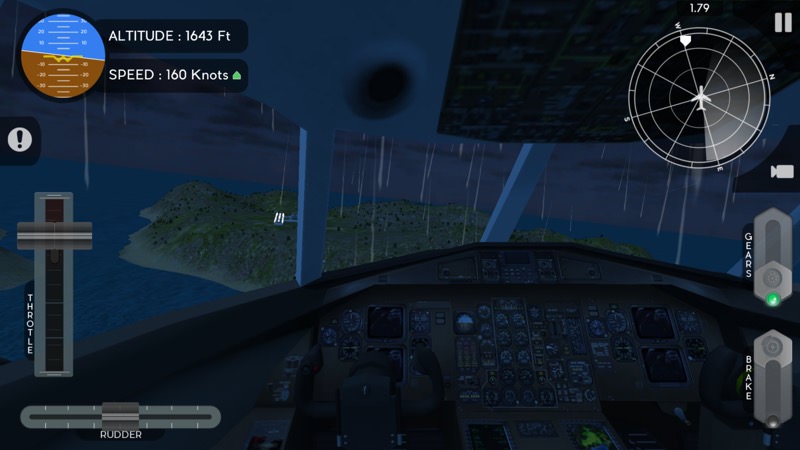 In fact, it's the weather that provides the most dramatic moments, as you might expect. The sound effects throughout really add atmosphere, complementing the visuals of moody skies and torrential rain: 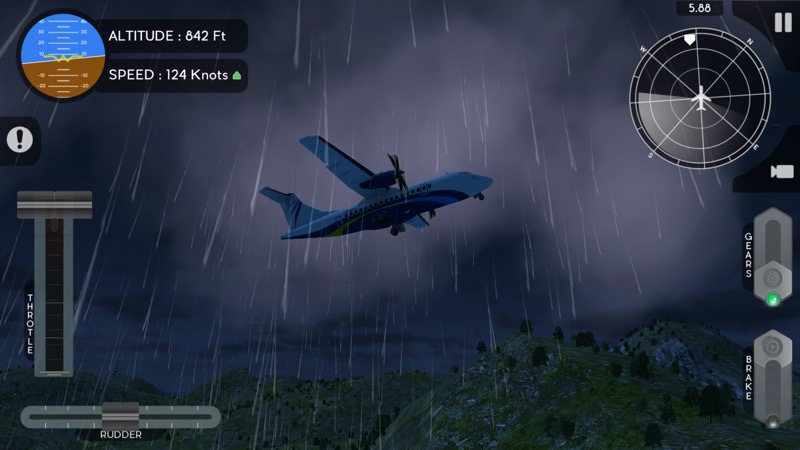 Flying is tricky in real life and it's no easier on your Windows phone in the simulator here. When reviewing any kind of simulator, my rule is that the best ones (whether golf or snooker or whatever) should give a sense for how difficult and challenging the real thing is - and this is very much the case here. 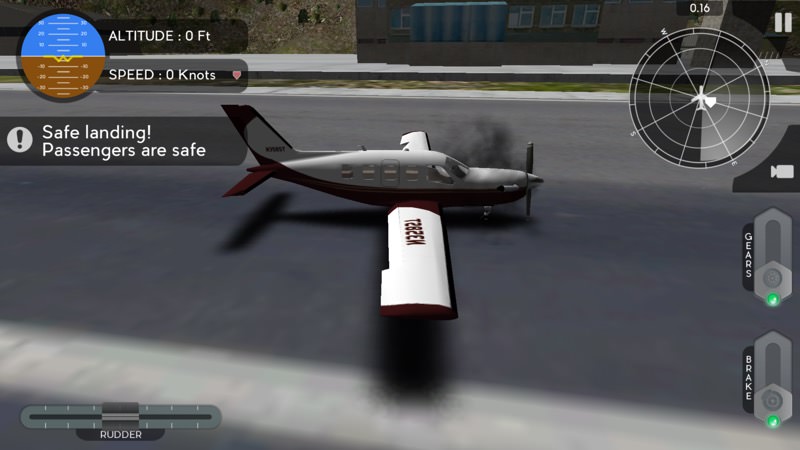 Here the engine blew and yet I glided everyone down to safety! 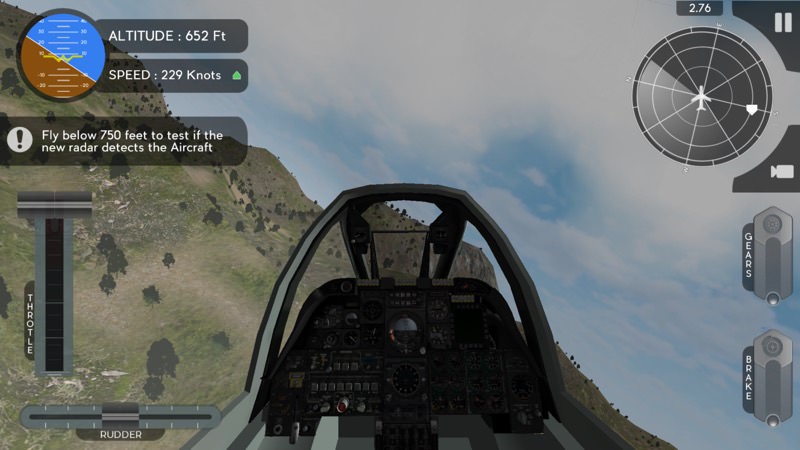 You know the famous 'Loop' runs by aircraft in the Lake District, helping pilots get practice flying through valleys below radar? Here's a Thunderbolt mission doing the same thing among the hills and peaks of the Avion virtual world - great fun and surprisingly realistic. 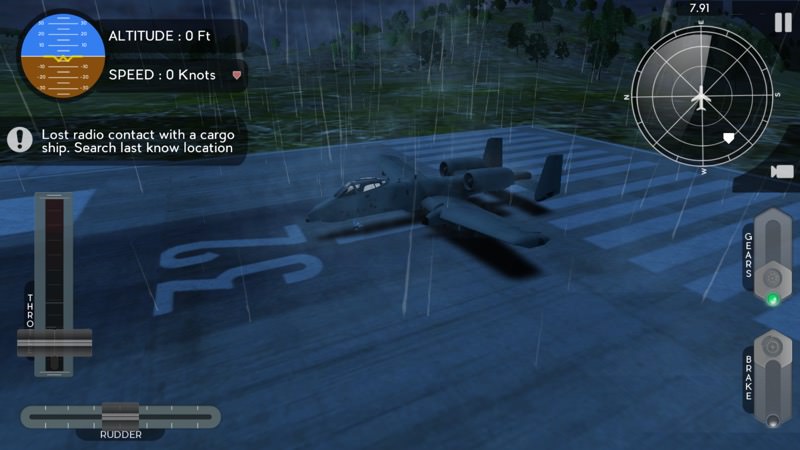 Aha - a search and rescue mission at night in the rain... 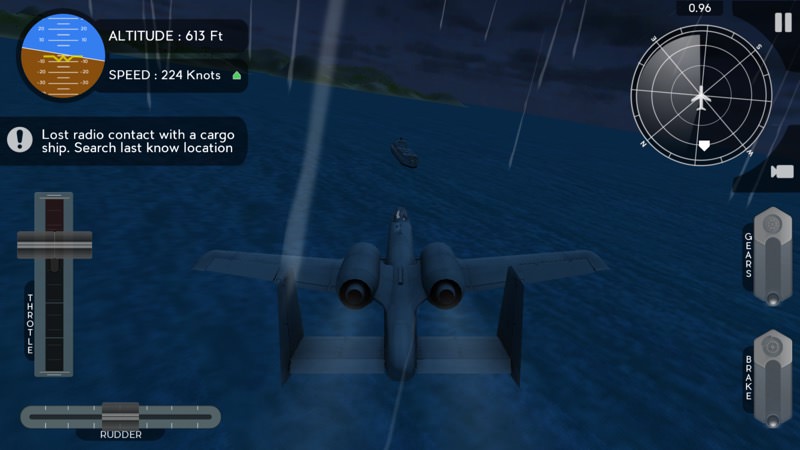 ...and yes, the ship had wandered from the waypoint position but, after conducting a spiral search pattern, I found it!

In short, Avion Flight Simulator 2015 has most of the fun parts of a serious flight simulator without all the tedious learning curve of complex controls or navigation procedures, or the long flight times between 'real world' airports. Here's all take-offs, landings, flying through valleys and over mountains, handling emergencies, and so forth.

On the negative side, in addition to the aforementioned interstitial ads, along with occasional delays in loading these, the load times for each mission are also long, around ten seconds (and this was on a Snapdragon 820-powered Alcatel IDOL 4 Pro, so a longer wait on less capable hardware). Still, as a flight sim fan, you're used to being patient, right? Back in 2017, I noticed some graphical oddities when flying some of the smaller 'prop' planes on the Lumia 950 XL, with the Unity engine struggling to render the spinning propellor and keep everything else perfectly stable, but on the Alcatel with its more powerful chipset, everything was 'buttery smooth' (© 361 Podcast). But your mileage may vary - I'd imagine the likes of the Lumia 640 struggling a little.

Ignore these criticisms though, this is well worth picking up (for free) and playing through, perhaps a mission or two when you get a spare moment - Avion Flight Simulator 2015 is top notch in so many areas and, most importantly, a great game in its own right.