This has been around for a while, but I'm just catching up with some side projects of major UWP app developers. Photo Shader sounds like a fairly ordinary image adjuster/filter package, but there are numerous ways in which this shines - literally. It's a full UWP app for phone/tablet/desktop/Continuum and works faster than anything except Microsoft's own Lumia Creative Studio. For which this is excellent competition - and also actively supported. See below for my full review and some examples of Photo Shader's capabilities.

There are, of course, a hundred and one photo filter applications for every platform under the sun, but Photo Shader is a UWP application that has quite a few points in its favour. Starting with the range of functions - this isn't limited to turning photos into 'sepia' or 'black and white' (etc), but also includes useful stuff like detailed adjustments, tilt shift, colour pop, effect masks, 'god rays' and more. All at full original photo resolution. And rendered in real time, very fast, as you adjust the inputs with variable sliders. Then add in that you can see the history of edits done to an image and can selectively take out specific changes. Finally, this works just as well with Continuum displays, which can be very useful if your Windows 10 Mobile phone is 'docked'.

It's not all sweetness and light, since the advertised 'Share to Photo Shader' function doesn't seem to work - at least not with the Creators Update, plus the utility doesn't appear in the 'Edit' list under Windows 10 Photos. Put those two together and you have to edit photos with Photo Shader 'standalone', picking images from your Camera roll in the application itself. Not a huge issue, but worth noting.

Here's a walkthrough of most of the main functions and areas in Photo Shader UWP*:

* note that this was also available for Windows Phone 8.1, though with a different UI and lower functionality 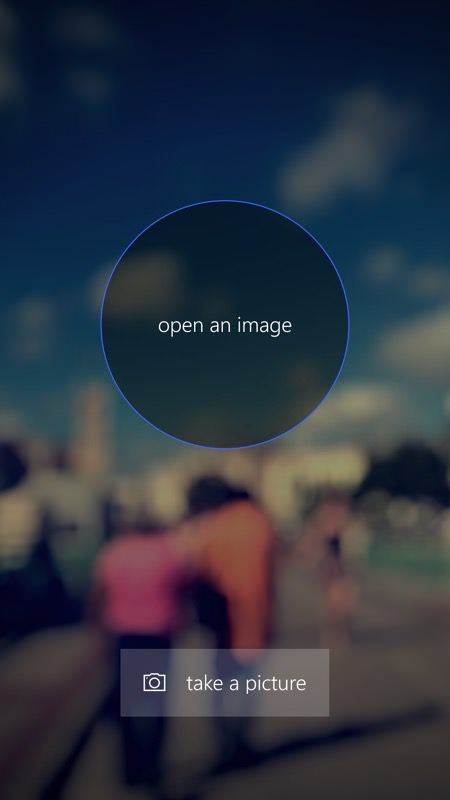 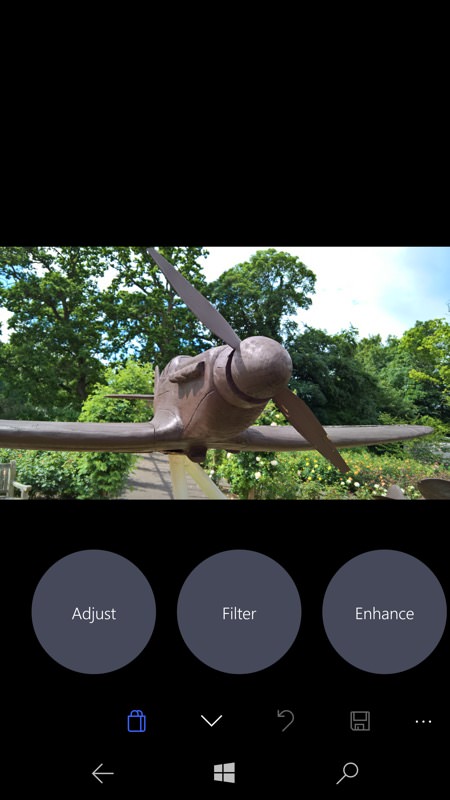 The interface is a little non-standard, but distinctive. There's 'Fluent Design' influence here, in as much as the images being worked on are at times slightly blurred while other controls are in the foreground, i.e. on top. The main application functions are grouped into 'Adjust', 'Filter', 'Enhance', 'Stylize', 'Blur', 'Distort' and 'Special'. You quickly learn what's where, don't worry. Tapping any circle opens up that set of relevant functions as a new strip of scrollable circles, and so on. 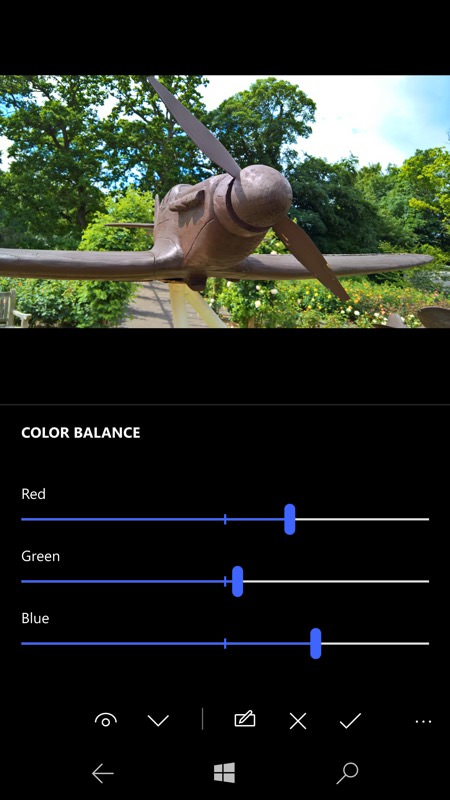 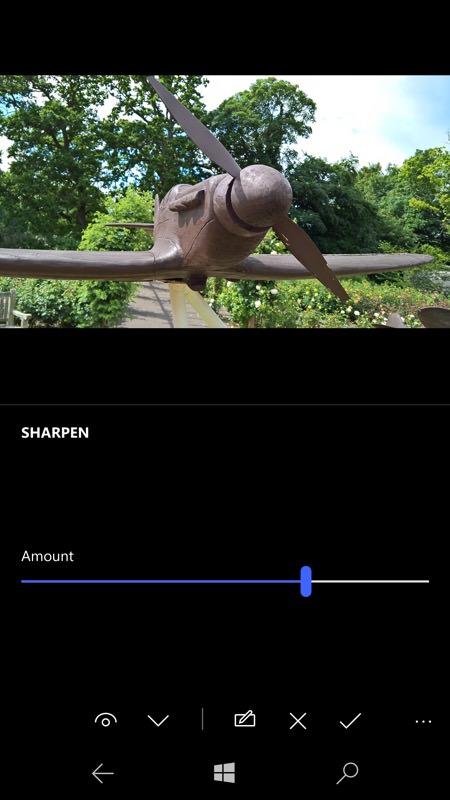 Here I'm showing functions from the 'Adjust' and 'Enhance' sections, with very fine control over the RGB colouration of a photo, plus a nice sharpening function, though don't go too mad with this, otherwise people will think you took your photos on a Samsung...(!) In each case for all the features here, tapping and holding the left hand 'original' control toggles the original image before the current editing operation, so that you can see how much difference you've made (so far). 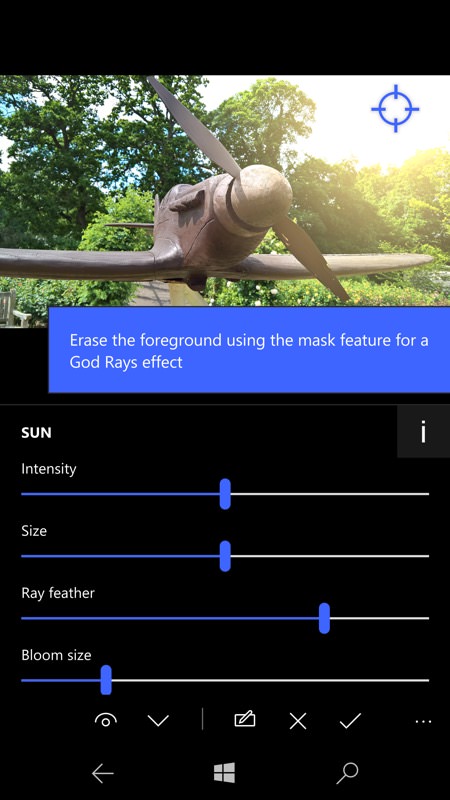 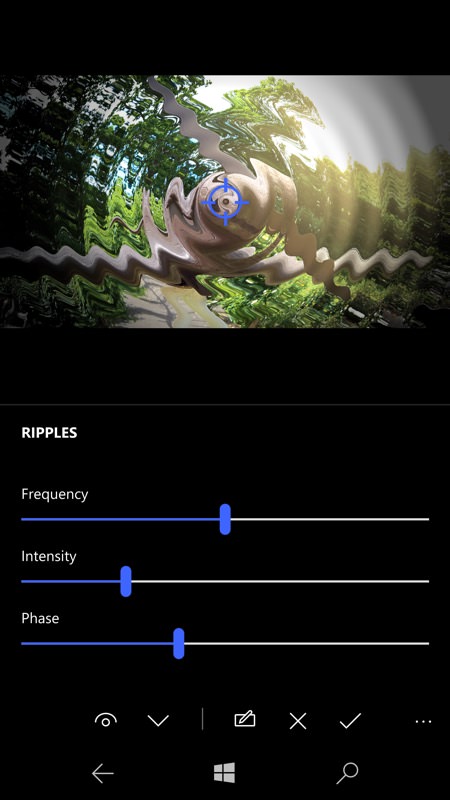 Found under the 'Special' functions, 'Sun' here comes with optional 'god rays'(!) and puts a virtual sun into the shot, along with realistic glare and shadow effects. And as before, everything it can do is fully adjustable, including exactly where the sun should go in the frame. (right) Here's 'Ripples' under the 'Distort' heading, along with the usual custom sliders - and it's worth noting that these are scrollable too, some functions have half a dozen things to fiddle with! 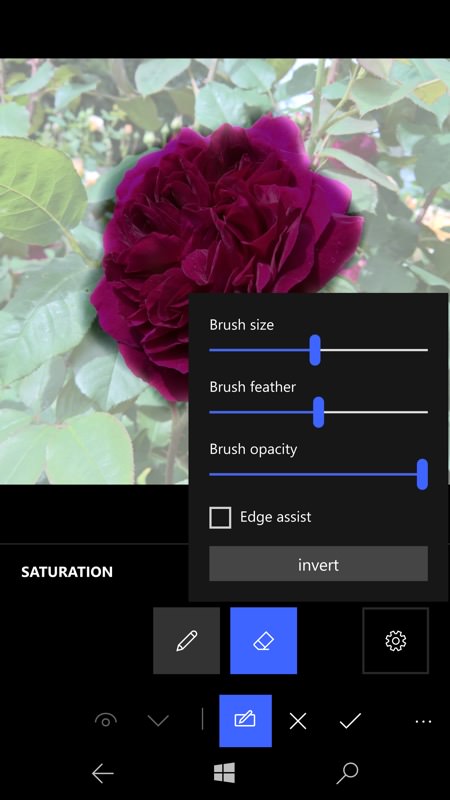 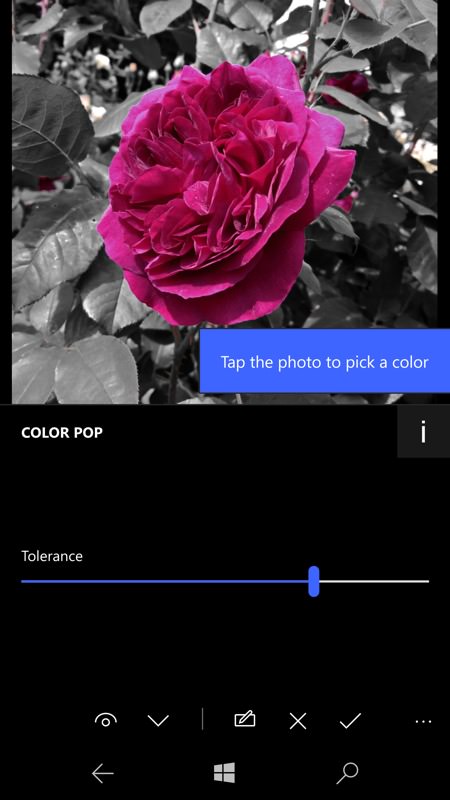 As hinted above under 'Sun', many of the effects are better off applied to a specific part of an image, using masking - this is a premium feature and part of the 'Pro' pack (£2.29), but you get 10 shots at using masks in order to see how well it works. From general 'edge assist' when swiping over an image to select a section to be masked, to adjustable tolerance when colour-popping, there's a lot more here that you can do other than changing images wholesale. 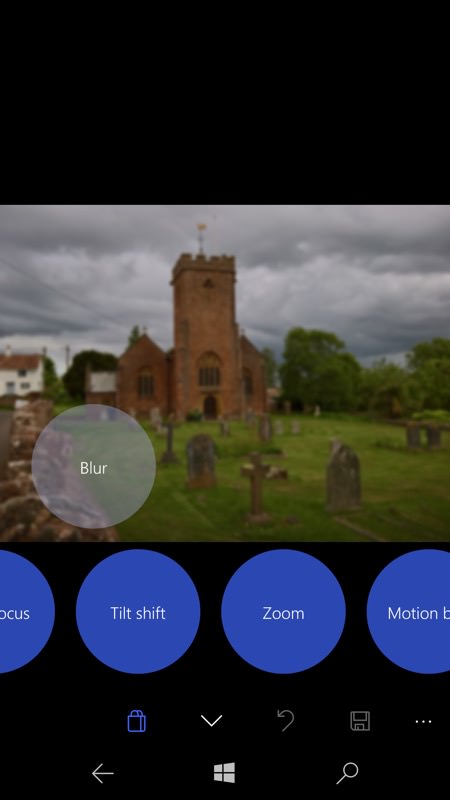 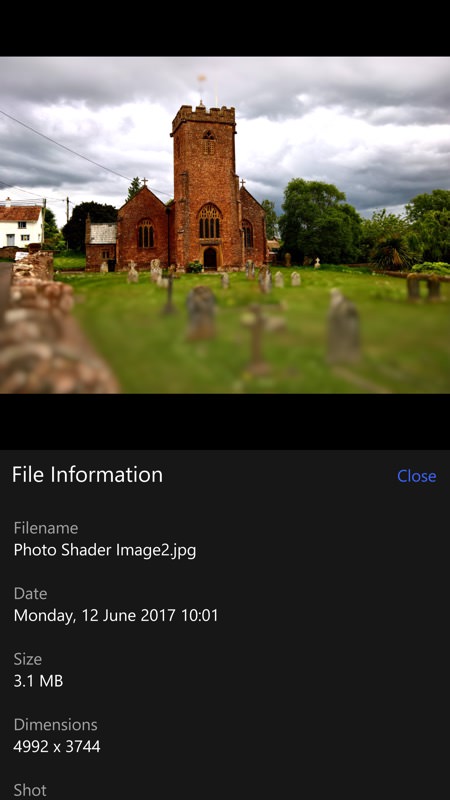 I've always loved 'Tilt shift' when it's done well, and here you can again adjust half a dozen of its parameters. On the right, above, I'm showing a finished tilt shited photo in Windows 10 Photos, along with confirmation that it has been processed at full original resolution. 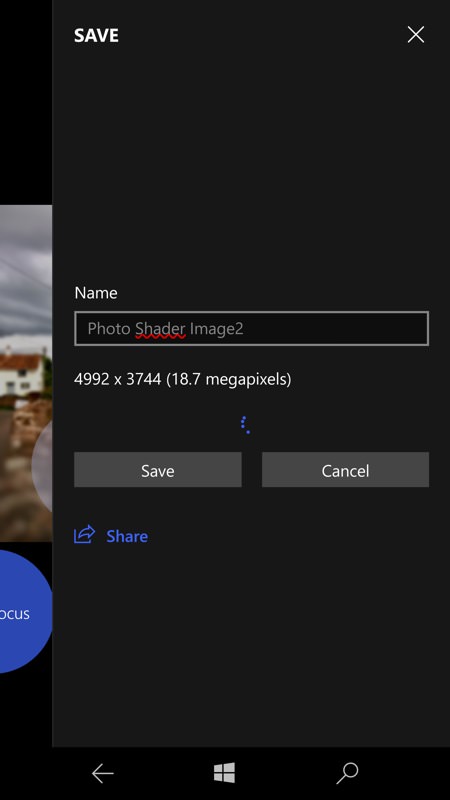 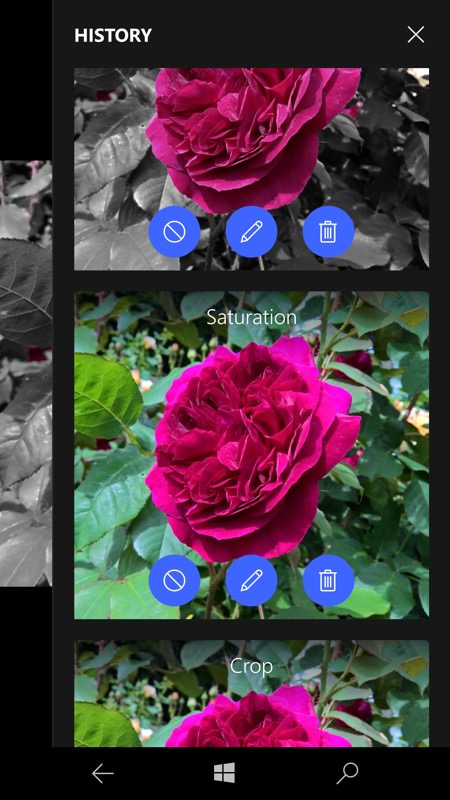 You get confirmation of output resolution when saving from Photo Shader, along with the chance to name the result (i.e. filename); (right) the editing history for an image being worked on - and yes, you can retrospectively remove edits or fiddle with them and the output gets re-rendered. Very cool indeed. 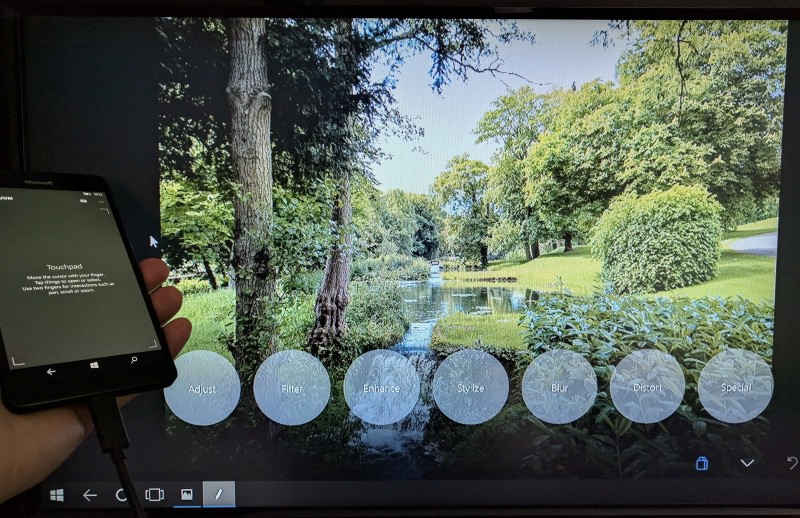 The obligatory 'Continuum' shot, showing Photo Shader running on my Lumia 950 XL but plugged into an external display and running at full 1080p resolution in landscape, just as on the desktop.

I was blown away by Photo Shader - the basic editing functions (and some of the special ones) duplicate what's in the free Lumia Creative Studio that's on phones already, making this something of a marginal requirement, but the sheer configurability, the rendering speed (almost everything's presented instantly, even at full resolution, with just a couple of seconds to save to JPG at the end), the masking facility and the handful of 'extra' functions all make this very much a worthwhile install for Windows 10 Mobile. Make it part of your imaging toolkit, it's a free download. And then if you find yourself using masks a lot then the developer certainly deserves his small in-app-purchase.