What's this? A review of a smartphone that doesn't run Symbian on AAS? And that doesn't run Windows 10 Mobile on AAWP? Actually yes - it's my first look at the new Nokia 6, running Android. And it's here because it's the return of the classic Nokia brand that I've written about so many times on these sites. The personnel behind it are mostly different, the OS certainly is, but is it worth casting a look in the 'new' Nokia's direction?

Probably not, though hopefully this mini-review will be of interest.

This Nokia is still designed in Finland, it’s still made like a tank, but the actual firm behind it is HMD Global and all the manufacturing is in China. So take the ‘Nokia’ branding with just a pinch of salt. There's little DNA here from the classic Nokia designs of the past, though some visual clues have been taken from phones such as the Nokia N9 (running Meego, so that's the fourth OS mentioned in the last two paragraphs!), Lumia 800 and Lumia 920. 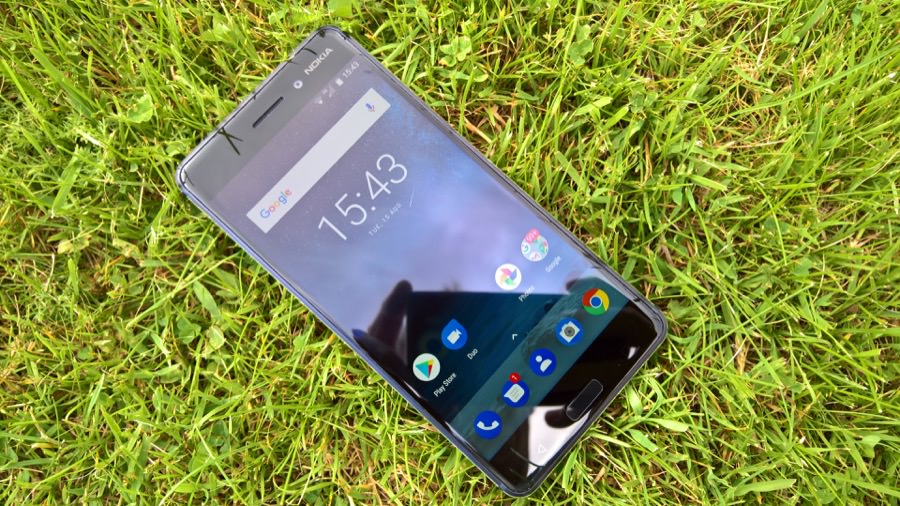 As a smartphone, the ‘6’ is well styled, I was enormously impressed by how solid it is, with slab aluminium sides and polished chamfered edges. It's heavy too, at almost 170g, almost in phablet territory with a 5.5” screen.

The fingerprint sensor, down the bottom, is 100% accurate, but the specification here means that it takes a second from placing your thumb to the Nokia 6 being unlocked and the display powered up. Is a second too long? Not for the target market, though anyone exposed to flagships (think iPhone 7, Google Pixel) will notice a difference.

Around the perimeter is a welcome 3.5mm headphone jack, all metal volume and power buttons, a speaker aperture (of which more later) and... a microUSB charging and data port.

That’s right - microUSB on a £200 smartphone in 2017, rather than the now ubiquitous USB Type C. It feels very out of place and my theory is that the Nokia 6 design was actually finalised at least 18 months ago, back at the tail end of 2015, when USB Type C was still only on flagships (the Lumia 950 and 950 XL famously launched with this, among the first smartphones with 'C'). The delays HMD Global faced getting the Nokia 6 to market have left it with this single anachronistic spec point. Most users won’t mind, of course, microUSB jacks and chargers are everywhere still - and, to be fair, it’s just about the only major disappointment in the Nokia 6. For the price. 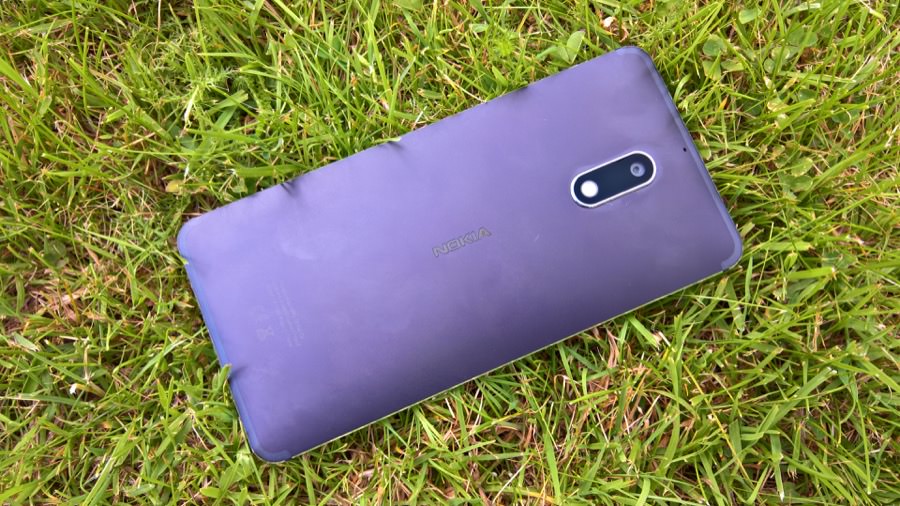 On the back is the reassuring ‘NOKIA’ logo, just as on the Symbian phones and Lumias of old, plus a very ‘Nokia’ vertical raised camera island. I suspect that the raising is purely cosmetic, since there’s no reason for this pretty average phone camera to need the extra thickness. I’ll come back to the camera later on.

The display is IPS LCD and 1080p resolution. With the RGB stripe (i.e. all pixels represented, unlike on AMOLED screens), the screen is extremely crisp and decently bright, though I noted that contrast levels weren’t brilliant in the sun.

The top earpiece is used as a ‘tweeter’ and piped the left channel for any stereo audio. This is - absolutely - a hack of the highest order. The results when watching Netflix or similar are a definitely imbalance in the sound, with 90% of the volume coming from the bottom firing main speaker and 10% from the earpiece. Much of the time this doesn’t really matter, but just occasionally something’s supposed to be happening in the left channel in terms of music or effects and… you can hardly hear it. With proper stereo now on the HP Elite x3 and Alcatel IDOL 4 Pro (etc.) a mainly-right-channel hack just doesn't cut it.

Still, for sat-nav, podcast and speakerphone use, the speaker combination is absolutely fine and pretty loud. Also on the audio front is a FM radio aerial built-in, not something you get on every phone nowadays, and indicating the Nokia 6’s potential markets, in countries where data isn’t ubiquitous and where FM radio is still a major source of news and entertainment.

You also get support for 5GHz Wi-fi and for NFC, the former meaning that HMD has gone the extra mile in terms of licensing all the Snapdragon 430’s capabilities, and the latter meaning that Android Pay is a ‘go’. 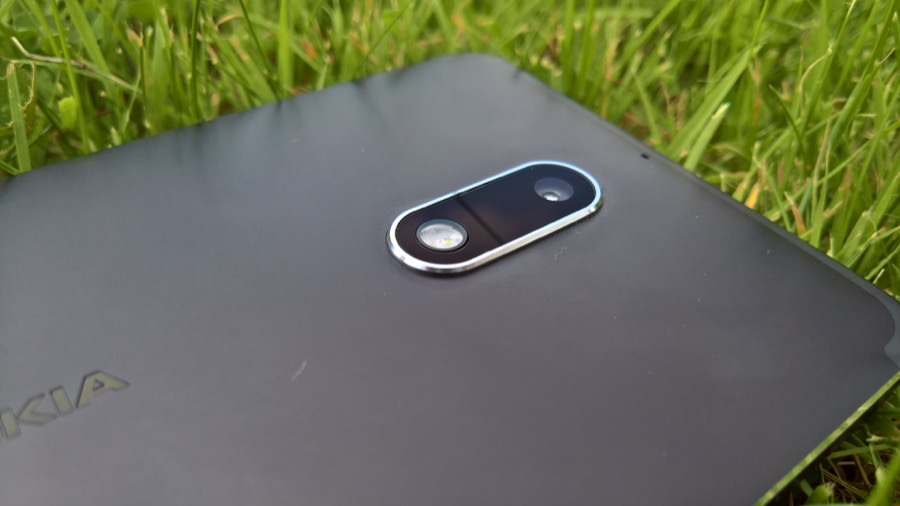 Imaging was always going to be a let down after the best of Nokia cameras in the Symbian and Windows Phone worlds, of course. And it is. The 16MP f/2.0 main camera shoot in 12MP in 16:9 and results are generally OK. The Phase Detection Auto-Focus regularly got confused by some of my arty macro shots, but you’ll have no issues for regular shots. In low light, results are distinctly ‘meh’, though not overly noisy, so there’s some effective noise reduction at work, even if details are then not as clear as you’d like. Again, think of the price, though - results are inline with this. Just don't see the word 'NOKIA' and think 'great camera'!

Although there’s no physical shutter button on the Nokia 6, a tap on the volume up button also takes the shot and you quickly get used to this arrangement. Importantly, the squared sides of the phone mean that keeping a grip while snapping is very easy.

Video capture is at 1080p but there’s no software or hardware stabilisation (OIS), so results are unremarkable. The front camera’s 8MP, by the way, and also not worth dwelling on.

The Snapdragon 430 chipset in here is paired with 3GB RAM and the Nokia 6 chugs along happily in this configuration, without ever really seeming speedy. The target market won’t mind and games work just fine. 32GB of internal storage is backed by microSD support, though you do have to sacrifice the optional second (2G-only) nanoSIM slot for this - not a big deal for most users, I suspect.

The OS here is vanilla Android 7.1.1, with nothing fancy added. Because of this, I suspect, it’s trivial for Nokia to keep things up to date, with the August security updates from Google only days after the Nexus and Pixel phones, with Google Assistant available out of the box, and with the official Google Pixel launcher. If you're thinking of switching to Android from Symbian or Windows Phone then start with something 'stock' like this - it'll break you into Android very easily.

Android is an easy transition from Symbian, with many similar UI and OS concepts, though it's unlikely anyone's coming straight from the latter to the former - but it will still seem familiar to AAS readers who have been out of touch with the phone world recently. Android is also pretty accessible to anyone used to Windows 10 Mobile, given the latter's UI convergence with the rest of the world recently - think hamburger and '...' menus, for example.

Moving straight to this Android-powered Nokia from Windows Phone 8.1 is more of a culture shock, though at least the massively better stocked application store is a sweetener. Any application that you've ever heard of is available here. Every shop, every service, every bank, you hardly need to touch the Chrome web browser - though that too is excellent and arguably better than Edge on Windows 10 Mobile and certainly superior to Web on Symbian and IE on WP8.1, of course.

Battery life was good in my tests, with the 3000mAh battery working with the comparatively low end chipset to easily get through a day. In theory there’s fast charging, compatible with Quick Charge 3.0 - this comes with the Snapdragon 430, though in my tests I couldn't get the Nokia 6 to acknowledge any of my fast chargers, so perhaps there's a software update needed to enable this.

Overall, the Nokia 6 is an unremarkable smartphone, almost every component is a downgrade from the Lumia 950, for example, it performs and is in the same realm as the Lumia 650, though I have to give props to Nokia/HMD for the terrifically solid construction and design. It's a phone I kept picking up, it feels like a serious tool, and it's a damn good start to the reinvention of the Nokia brand.

Comments welcome - does this comeback for the 'NOKIA' brand interest you at all? Or does Android put you off? Or perhaps the less than stellar camera? Or maybe you relish owning a Nokia again, and with 2017 mainstream apps and support?

PS. Today sees the launch of the higher spec Nokia 8 and I'll cover this at some point too.

PPS. I'll be reviewing this in much more depth in the next Phones Show and on Android Beat, if you're interested...