Take the retro cutesiness of 'pixel' artwork and splice in a full 3D world and FPS shooter, make sure that the in-app-purchases are sensible and restrained, and what have you got? A top UWP game, that's what. The graphics do look a little over-the-top in terms of deliberate pixellation, but the gameplay is top notch and everything's very well thought out.

Step into the block world and exterminate all blocky characters on your way and on the top of it, survive! Cubes are not your only problem, you must also destroy vehicles and buildings to progress. If you want to become a hero and an ultimate pixel shooter in block craft shooting games you must be armed to the teeth! Choose your weapon wisely, use a machine gun, a revolver, a bomb or a pixel gun turret, it`s up to you! Drive cars, buses, planes, tanks or helicopters, switch to the third person shooter mode, do whatever it takes to stay alive as long as possible in pixel shooting games!

In fairness, I haven't got as far into the game as driving and flying other vehicles, but I've got far enough to give Pixel Battle: Gun Strike 3D my blessing. The load times are quick, the controls responsive and the eventual monetisation for the developer very well restrained. If you love first person shooters, ducking behind barriers to survive, then leaping out and taking aim, advancing when you can and retreating where you have to, then this title is for you, for any Windows 10-running computer, whether a phone, tablet or laptop. 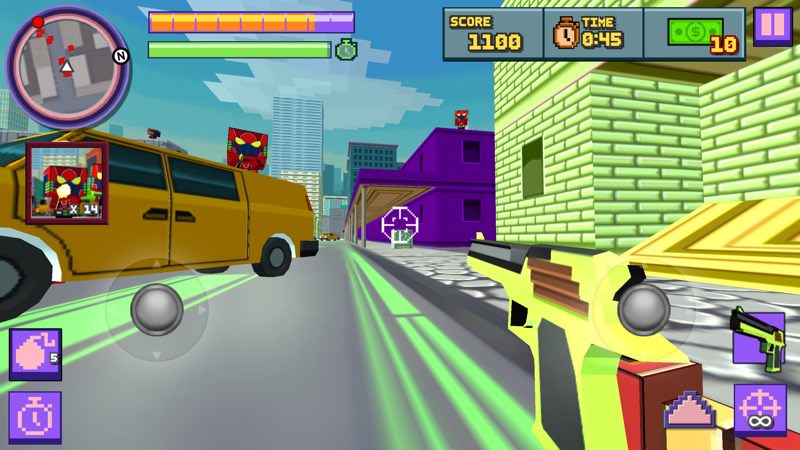 The game in action, with fluid motion, auto-fire on targets, varied scenery, and so on. The interface includes a rafar view for baddies (top left), weapon selection (bottom right), and health (of course), since you'll lose some everytime to take a hit. Until the next medikit, that is! 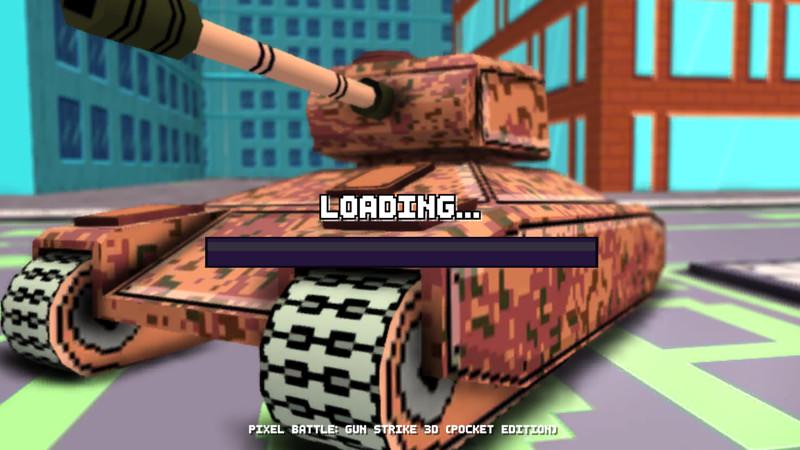 The game as a whole and individual levels load in only a few seconds, so there's not too much hanging around. Is this lack of delay due to the pixel-nature of all the objects in the game? Possibly. Anyway, the end result is that you're back into the fray relatively quickly. 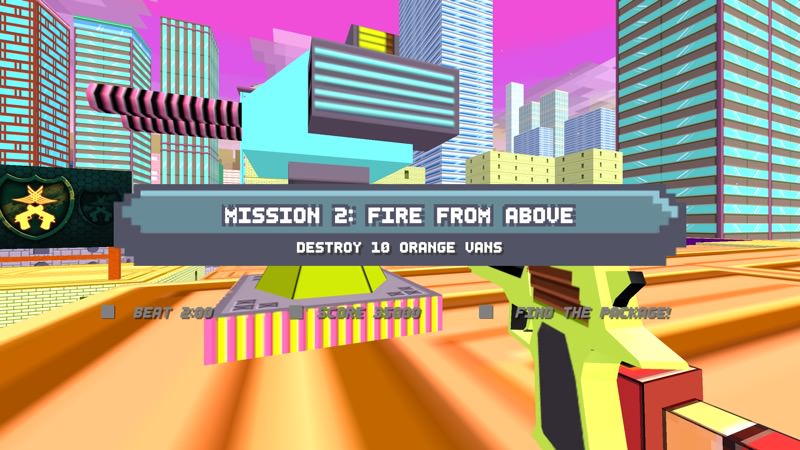 There's a true 3D elements to Pixel Battle: Gun Strike 3D, with some levels (such as this one) starting on the roof and with ramps and jumps here and there. It's a 3D world in which you can roam freely (though you'll have more fun if you head towards the bad guys!) 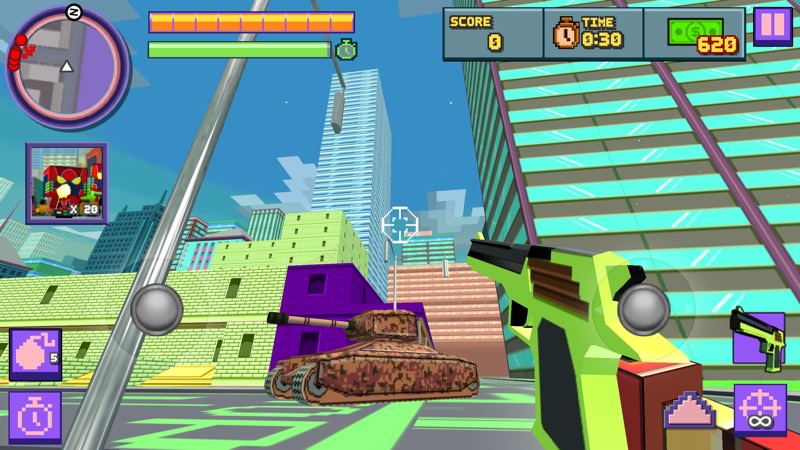 More 3D for you, this time looking up - you have a full 360 degree movement. And, quite often, you'll spot bad guys on top of things (vehicles, buildings) and can can target them there. The thought of living in such a pixellated, pastel-coloured city appalls me, but it's a fun place to do battle! 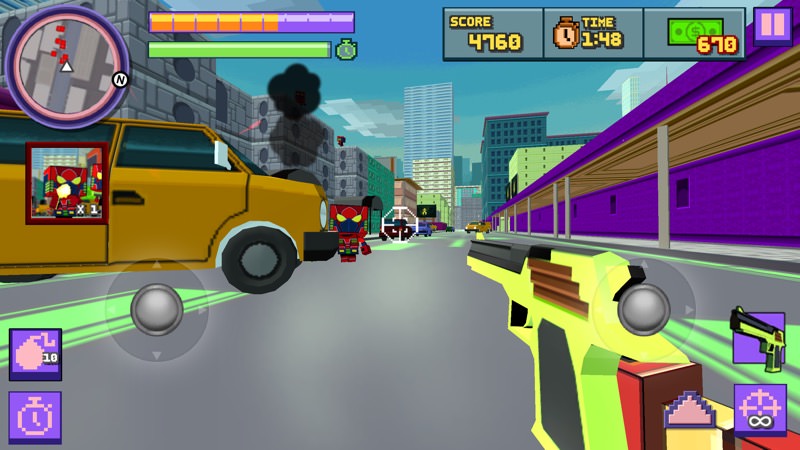 Advance, target, weave, rest, review, advance, fire again. And so on until your goal is met for each level. The twin joystick system works well, with the left one controlling lateral movement (forwards, left, right, etc.) and the right one controlling orientation (turn/look left/right/up/down). And, when something is in the cross-hairs properly, a shot is taken with your current weapon. 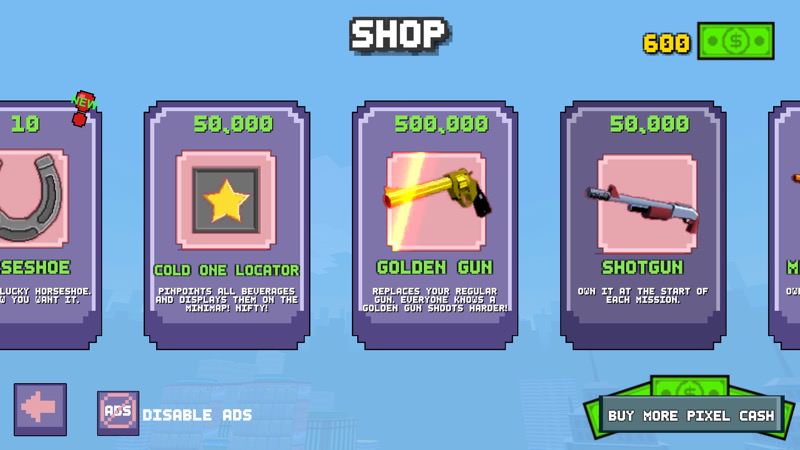 New weapons and power-ups can be bought with virtual ('Pixel') Cash, as you might imagine. But don't worry, since you're not about to be gouged. 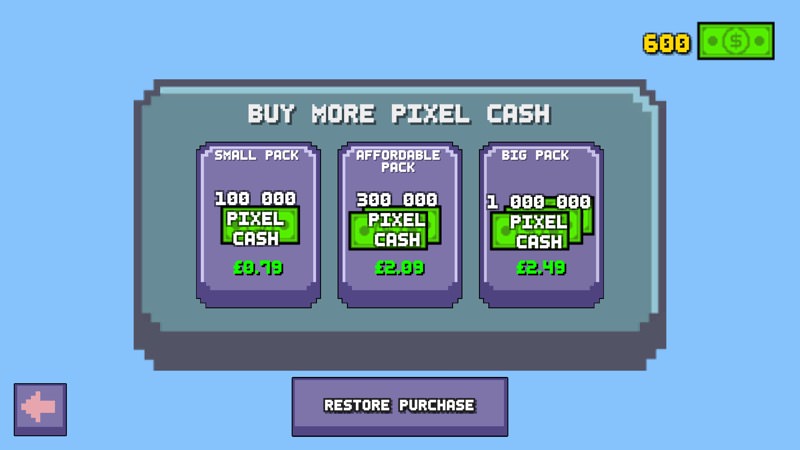 In fact, the largest real world purchase, of a million Pixel Cash, is only £2.50 (about $3.50?), a hugely welcome change from pay-to-win Gameloft rip-offs where you can spend over £100 in a couple of taps. There's also an IAP to remove ads, and this is another £2.50. But all fair enough and if you're spending tens of hours in this game world then even a maximum of £5 total is absolutely fair reward for the developers. 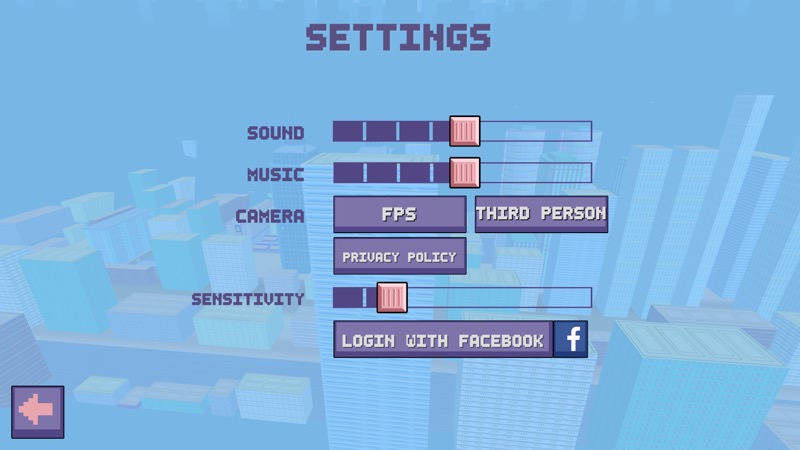 In addition to the usual volume and stick sensitivity controls, you can play in 'third person' mode, where a camera sits behind your pixellated red hero character: 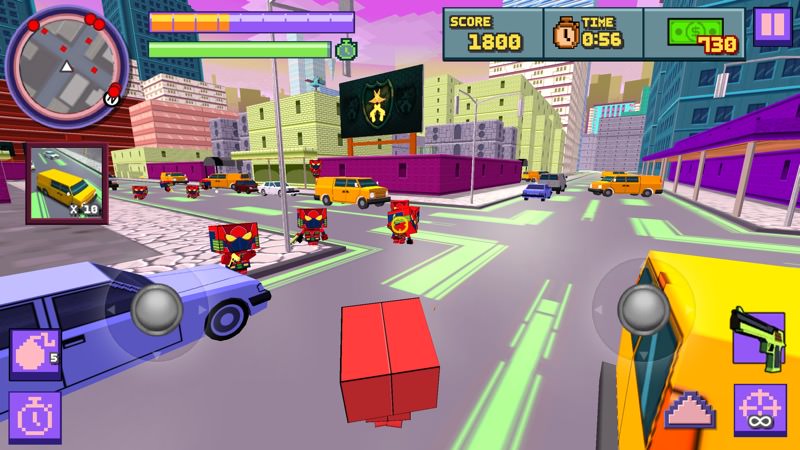 This isn't as much fun as the default FPS (First Person Shooter) mode though. The screenshot gives another good look at this pixellated virtual world though. Very detailed. 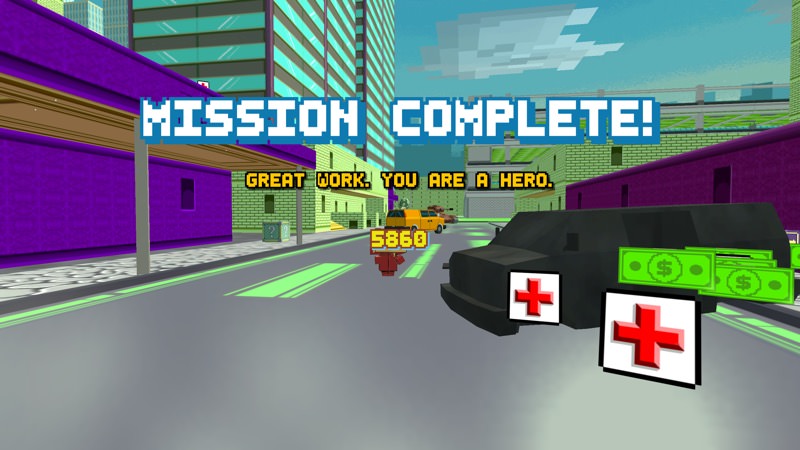 We did it. Goal achieved, medikits and Pixel Cash on hand as rewards, and on to the next challenging level in Pixel Battle: Gun Strike 3D...

Terrific fun - the variety in the virtual world levels, in the goals and the what you have to do, easily sustains the game through tens of hours of mobile gameplay. Hit!

PS, there are several promo videos for the game, thanks to its heritage on Android in particular, so here's one of them: