Unbelievably, we don't seem to have reviewed this secure database (i.e. secret stuff manager) system before on AAWP. Even in the days of the WP8.1 version. And at some point a Windows 10 UWP version was released... and we still didn't review it. Partly the developers' fault for not, you know, contacting us - ever, but we should have spotted it anyway. Making up for lost time, here's a look at the latest generation of this massively sophisticated personal security tool.

mSecure is a 'secure database' in the classic sense - it's not a web site password auto-fill system like Lastpass (though there's a rudimentary clipboard copying system into Edge). The focus here is on remembering and protecting everything that's secret about your life. If you need information from it then you'll find that anything in the database can be copied to the clipboard manually and pasted elsewhere - just don't expect Edge automation.

Which I think is a Very. Good. Thing. Password automation systems are never 100% reliable, are prone to vulnerabilities, are typically limited in the types of data they can store, plus you never get to see your own passwords because they're handled without your input. With a secure database, passwords and PINs are shown when you need them and - subconsciously - your brain will register that your Facebook password is 'MyFaceP83' or whatever. Or that your bank account login id is '037391'. You don't need to remember either of these but there will be one day, at a friend's house or when travelling and when your phone's battery is dead or whatever, then you'll sit down at a strange computer and your brain will pop the details in for your fingers.

It's why I standardised on an open source secure database, KeePass, many years ago, for which there are clients for all platforms under the sun. There are even Window 10 Mobile versions, though none are implemented that well (I've spent two years researching them). Which is why I was interested to test out mSecure, whose developers are clearly star Windows coders.

Here's a spin through mSecure then, in its UWP form for Windows 10: 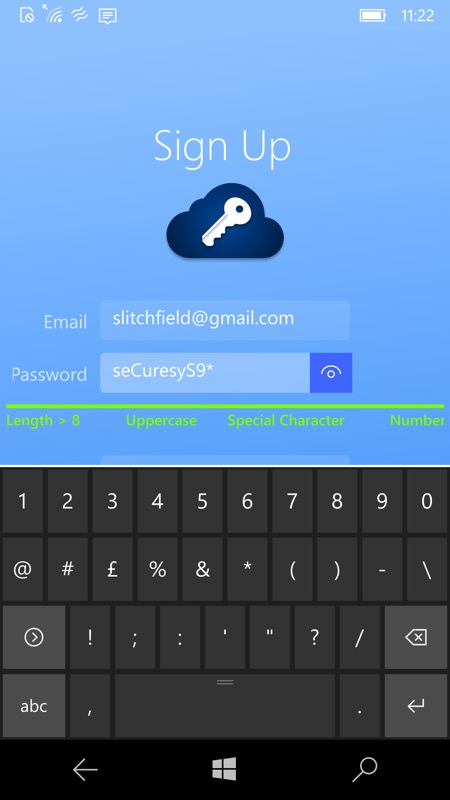 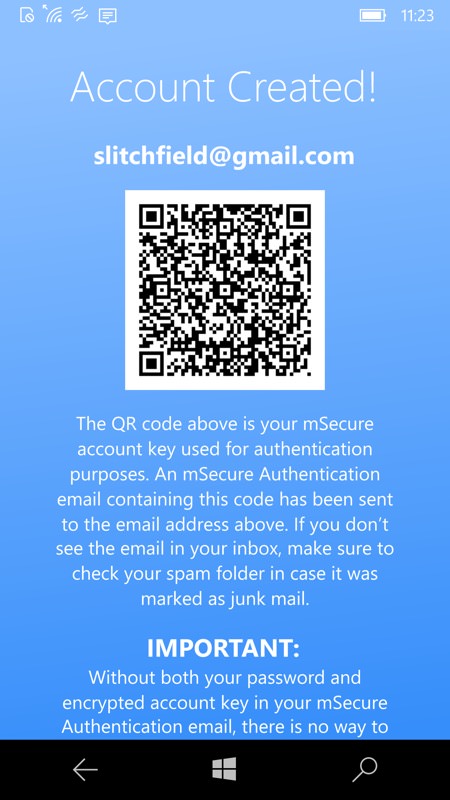 The sign up process leads you through a very secure master password - it's the only password you'll ever need, in theory, though I was very disappointed that no Windows Hello support has been implemented. So no way to get into your mSecure database with your iris or finger; (right) you also get a unique QR code to your email address - we'll come back to this later, as it's your way to link mSecure installations. 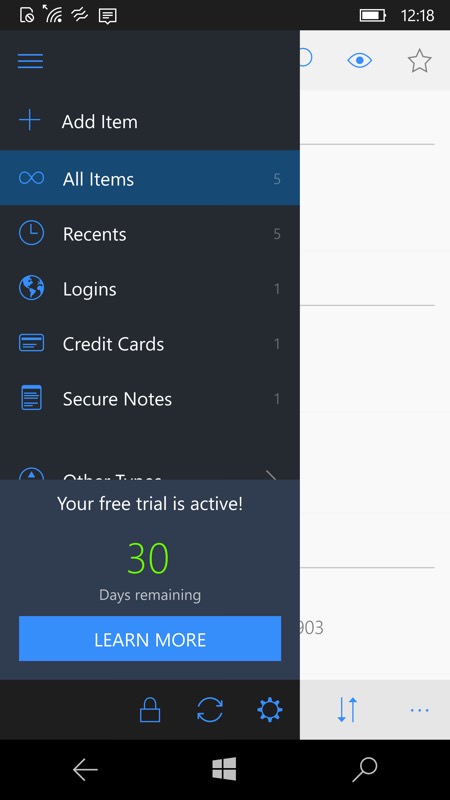 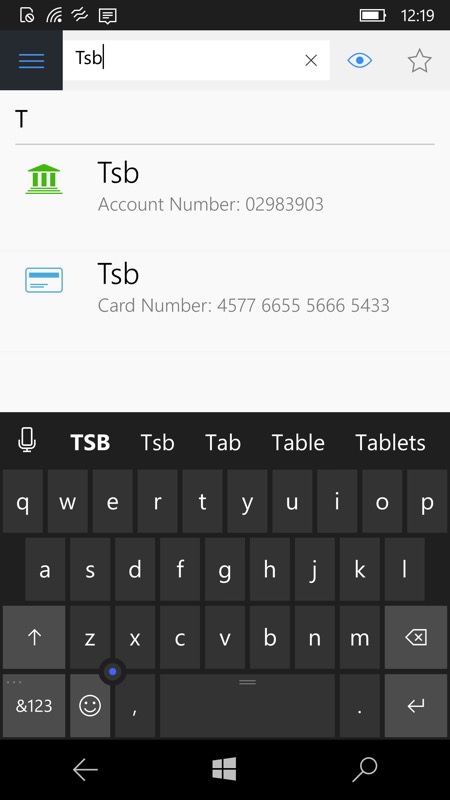 The free download from the Store (I'll come back to price later on) gives you 30 days to get going, entering data and generally trying the whole system out. Very nice. Here's the mSecure UWP hamburger menu, with Logins, Credit Cards and Secure Notes all sub-sets of the main database; (right) as with all good secure databases, there's an excellent search facility - the key to a great app is being able to find things in all that morass of dense information! 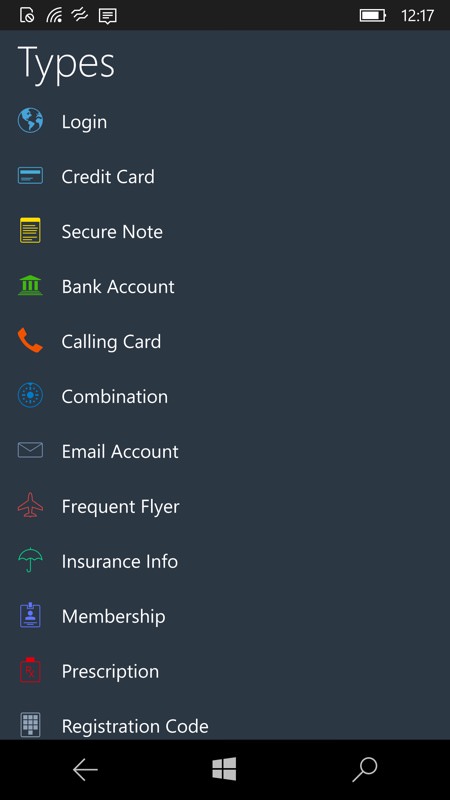 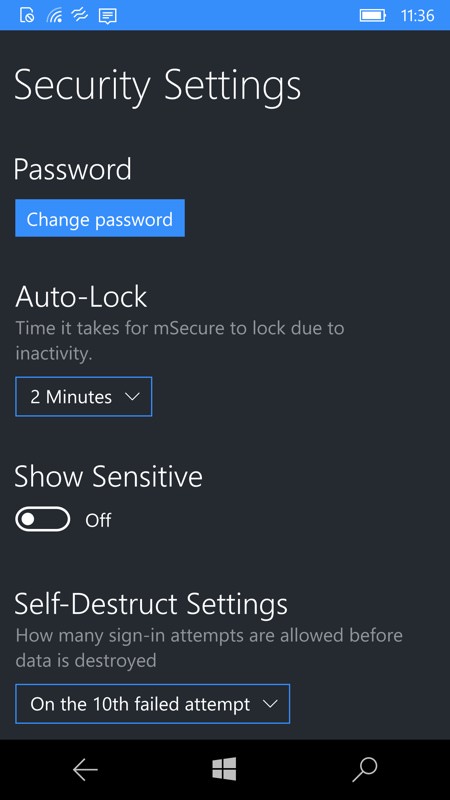 There's a good range of predefined database record types - this is no simple flat file system with everything you need squeezed by necessity into a Notes field. You get that too, but you also get to completely customise every record, with just the field types you need - so dates, numbers, PINs, and so on; (right) another secure database staple is a sensible auto-lock system - here you can choose the delay before this kicks in. So even if something nicks your phone and you had mSecure open then they're locked out by the time they get back to their lair and take a look. Oh, and a 'self-destruct' setting, too! (On this device, anyway, it won't wipe out the data in your mSecure account.) 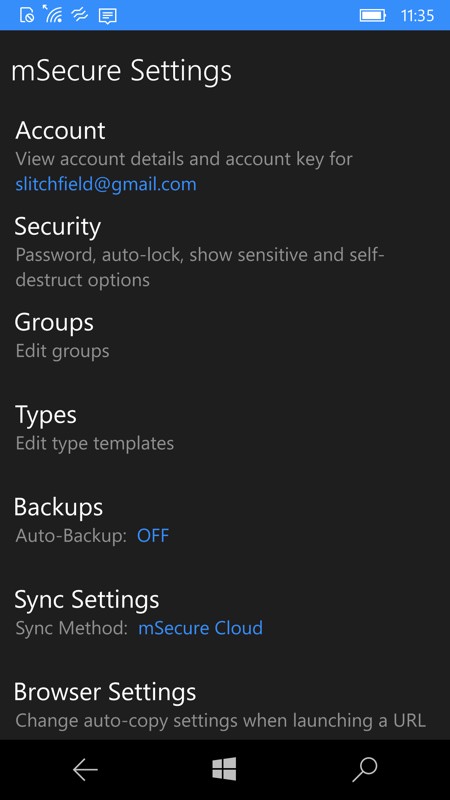 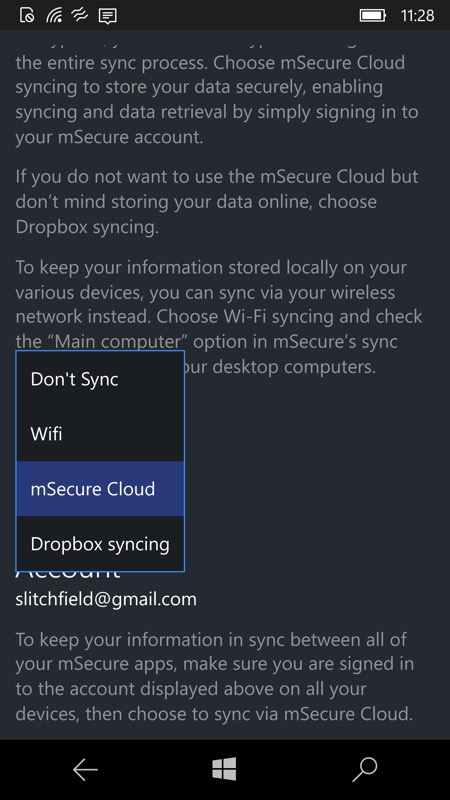 Syncing the same data to all other signed in mSecure instances is the key to security and to lack of confusion, and mSecure does this fabulously well. The default, via mSecure's servers, is best and quickest and easiest to set-up, but if you really don't trust the developers then you can also use Dropbox or even local ad-hoc Wifi. 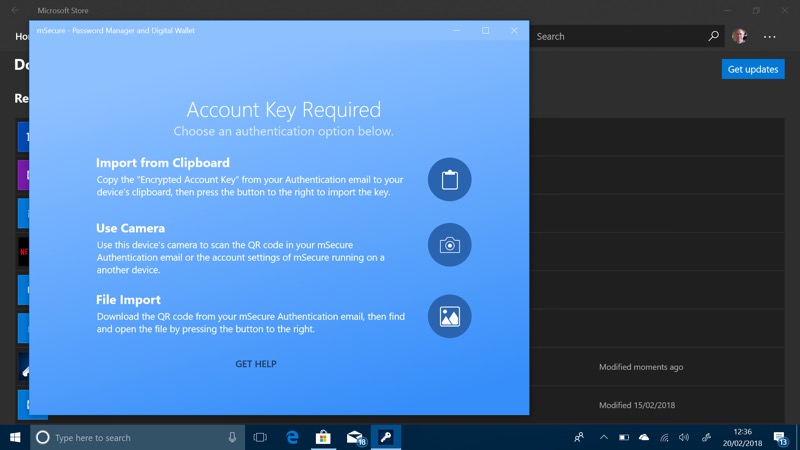 Proof of the pudding, and so on. Here I'm setting up my Surface Pro with mSecure. After signing in with email and password, there's a second factor - the account key, mentioned earlier. As the Surface Pro has a camera, this was as easy as holding up my Lumia with the QR code displayed and mSecure on the Surface Pro happily authenticated. 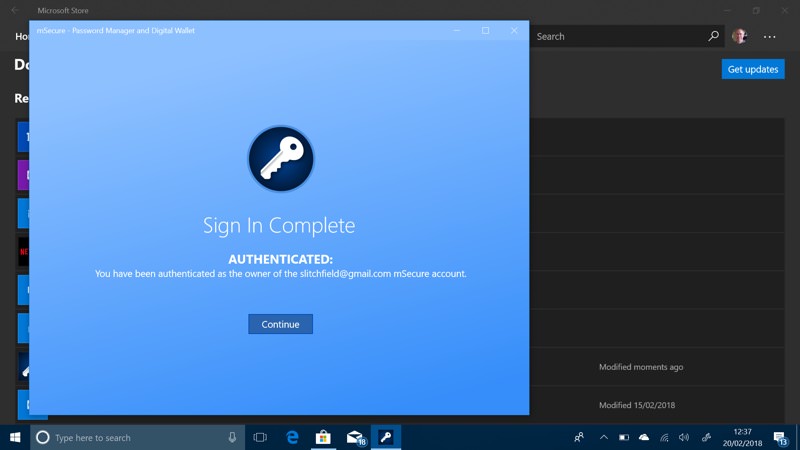 All very slick. If you then needed another device in your mSecure system then you could get the Surface Pro (e.g.) instance to display the QR code and then read this from the new device as part of its set-up process. Kudos to the developers for how well this all works. 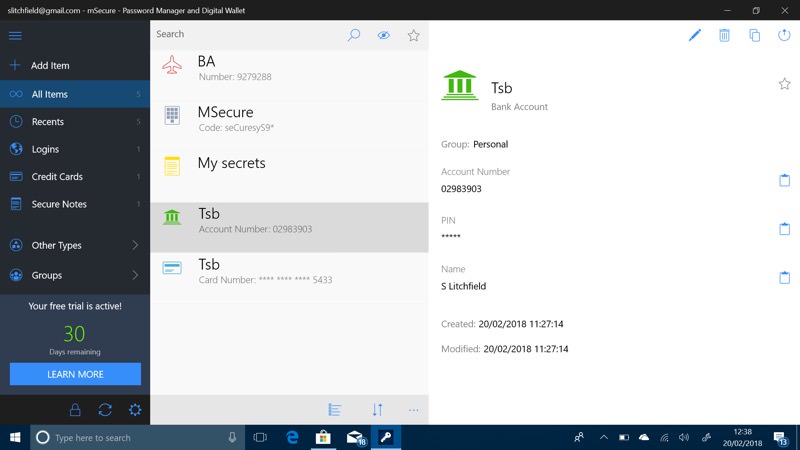 And seconds later I'm into my mSecure database, loaded from the cloud, on my Surface Pro. And, by maximising the window, as here, the UI reflows its layout to give a full hierarchical view of content. A great example of UWP apps in action across all Windows 10 devices.

Idyllic, isn't it. mSecure has done such a good job with this and I can't recommend it highly enough.

There are just a couple of caveats. Firstly, it's not at all clear how to get secure data in from another source, should you be trying to migrate from a different secure database system (like KeePass). I couldn't find a way to do it. The short answer is that you'd have to build up your mSecure database from scratch, likely as not copying and pasting anything non-trivial in, field by field, from whatever you're currently using (perhaps a password-protected Word or Excel document?)

Secondly, mSecure isn't cheap, at £25 or so. Now, don't freak out, this is for the UWP application and, once bought on (e.g.) the phone then you can install and run the exact same UWP app on your (e.g.) Windows 10 tablet or laptop too. And possibly even more devices, bringing the cost per device down further. However, don't get too hung up on price - this system is going to hold your deepest and most valuable secrets, and as such is worth every penny to stop interlopers grabbing them. You're paying for the slickness and speed with mSecure - it's SO much more polished than its competitors.

PPS. Don't get too excited by the passwords, details and QR codes above, they're all dummies. In fact, feel free to log in as me and help populate the database with more sample data!!!