Vector graphics is, it's fair to say, something that's a little specialist - you may well encounter examples in everyday life, in documents, even web pages, but you'll never be required to know what you're seeing. Vector images and formats are vital to how office infrastructure works though, and this is a handy UWP conversion utility that runs on any Windows 10 phone, hybrid or laptop.

Just a quick backgrounder - the key distinction between vector and traditional bitmap graphics is that in the former every graphical element is described mathematically, while in the latter everything's just a mass of pixels that your eye interprets. So a vector image of a clock might be made from maths describing a circle within a square and then some more maths describing the lines that make up the hands. While a bitmap image (JPG, PNG, etc.) of a clock would be (e.g.) a 5 Megapixel array of coloured points, i.e. a photo of a clock.

For most graphics use in daily living, bitmaps make more sense, so photos in web pages and in print, etc. But vector images are very useful when something needs to be scaled massively - think of an engineering drawing that needs to be precise whether printed out at A4 or A0, with no blockiness. Plus they're far smaller in terms of byte size and thus more efficient all round.

If you're a professional who has contact with vector images then you'll be interested in a tool that can solve the typical problem whereby Joe Bloggs has emailed you a .EPS file of the new blueprints, but you're supposed to review them and pass on to Sarah Smith, who you know is going to complain if she doesn't get a WMF file and to give a preview to your boss, who's going to want a thumbnail in something 'rendered' and simple to view on his desktop, such as a standard PDF.

Anyway, lifted from the Store description for Vector Conversion Tool UWP, here's the full range of formats available for conversion:

From file to Vector

From Vector to file

Sorry for the long lists, but you'll get the idea. You'll spot a few bitmap to vector conversions here and there, as well as a few going the other way around, but there are always compromises. So most conversions are from vector to vector, or at most from vector to a pseudo-print format like PDF.

Here's a walkthrough of the utility in action. Of particular note is that the actual conversion work is done in the cloud, on Roxy's servers. This is presumably because it's incredibly RAM intensive to manipulate large vector graphics/documents, and as long as your connection can handle the upload and download sizes then it's better to do the conversions on a server with lots of resources. 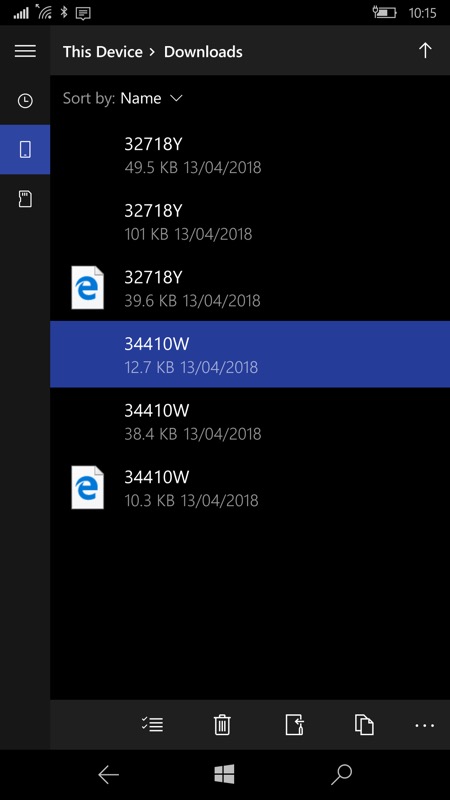 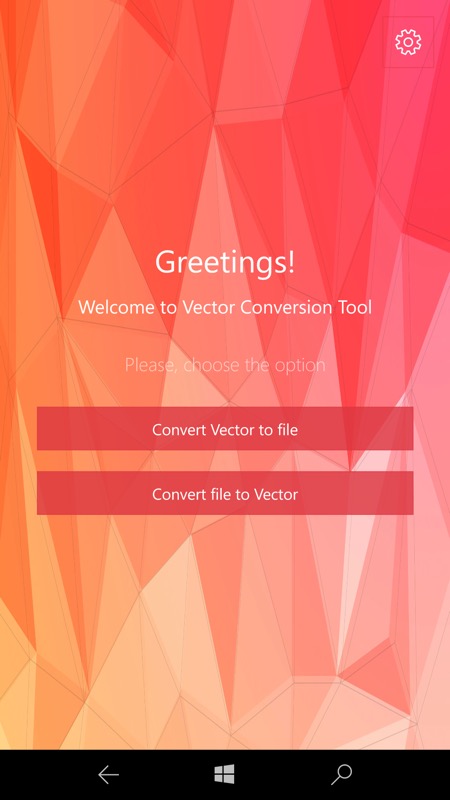 Starting with some sample vector graphics (from here), the phone is rather confused. It shows the Edge icon for two .SVG graphics but nothing for the others. If I want to do anything with the others (.AI and .EPS in this case) then it's time to boot up Vector Conversion Tool UWP... 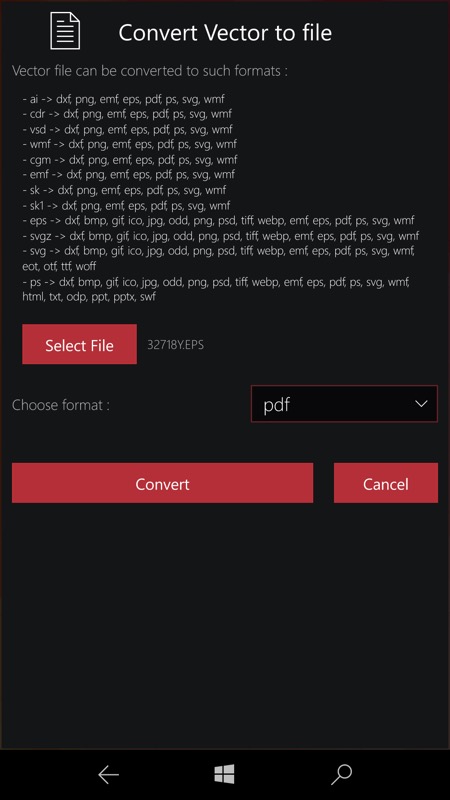 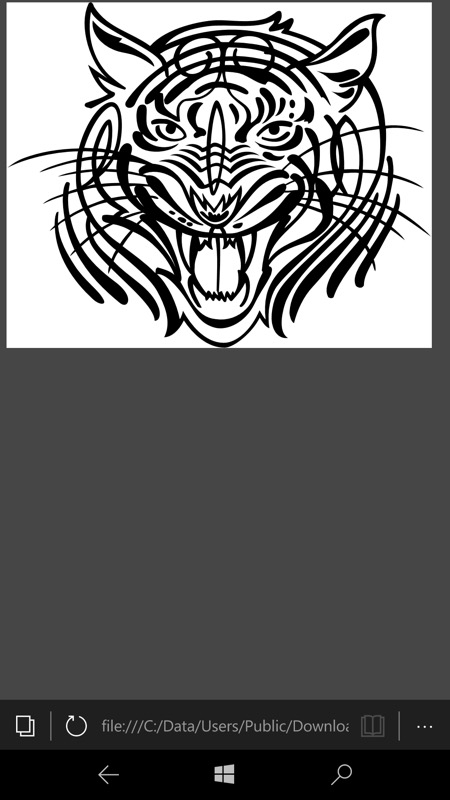 The UI is purely functional, but you'll get the drift - all the finesse is at the server end in terms of conversion routines. Pick a file, choose the output format and then tap on 'Convert'. A little uploading and downloading later (only a couple of seconds for this test graphic), I had converted my sample .EPS (Encapsulated PostScript) graphic to a PDF. Which could then be viewed in Edge (as here) or shared onwards. 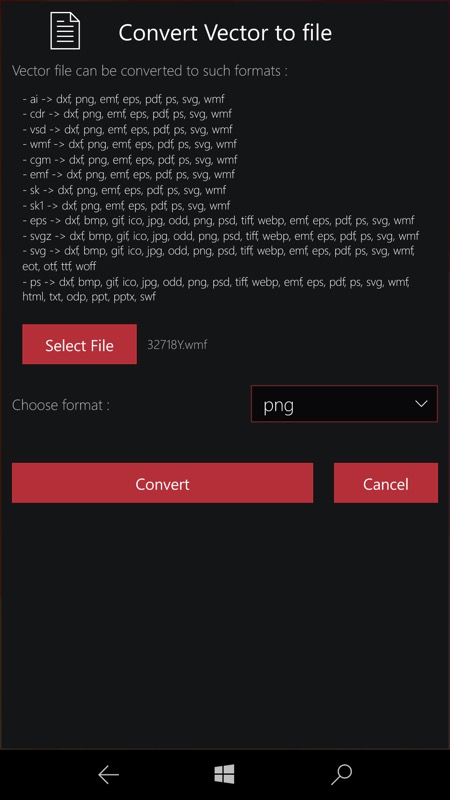 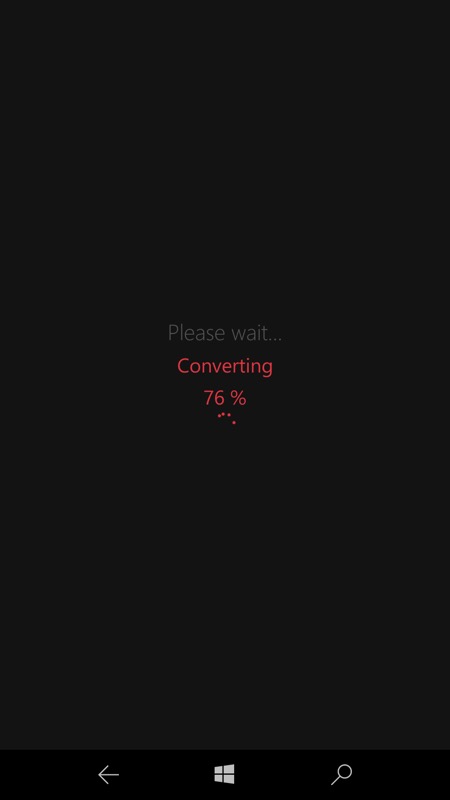 Another example, here I'm converting a .WMF vector graphic (Windows Meta File, the earliest format of them all) to a PNG bitmap. Not a trivial process and the result won't be 'vector' anymore, but it's something you might still want to do in the real world. And (right) Vector Conversion Tool works just fine. Here I've caught it at the 'converting' stage (on the server). This is followed by 'Downloading' and then it's saved where needed on/via the phone/device.

Like other Roxy utilities (see also here for PDF conversion) this is all about buying the tool and keeping it in your toolbox for when you need 'that' conversion in a hurry, to get you out of a fix. When working in aerospace in the late 1990s we used to deal with .EPS and .PS files a lot and this type of tool would have been very helpful. If you're a professional in 2018 then I suspect you'll find a use as well.

PS. Vector Conversion Tool is currently around £3 in the Store, on offer, from its normal £5 or so.