Part photo compositor, part meme/card creator, Pic Collage is an interesting Windows 10 application that works on both desktop and mobile, but has a few UI quirks on the latter. Outputting at under 2MP by default, the in-app-purchase here is to enable HD exporting of your creations, which seems sensible. Let's hope enough people do this to justify updates to its developer.

We've seen photo collage tools before, we've seen meme generators, but Pic Collage aims to combine a raft of utility functions into the one interface, and largely succeeds. One other reviewer called it "like Photoshop for first graders", which sounds about right. There's nothing tricky at all here, other than zooming text, which I'll come to below.

The three main composition starting modes are Grids, letting you kick off with photos you've snapped, Templates, starting you with predrawn graphical frames, and Freestyle, where you can add anything in any order: 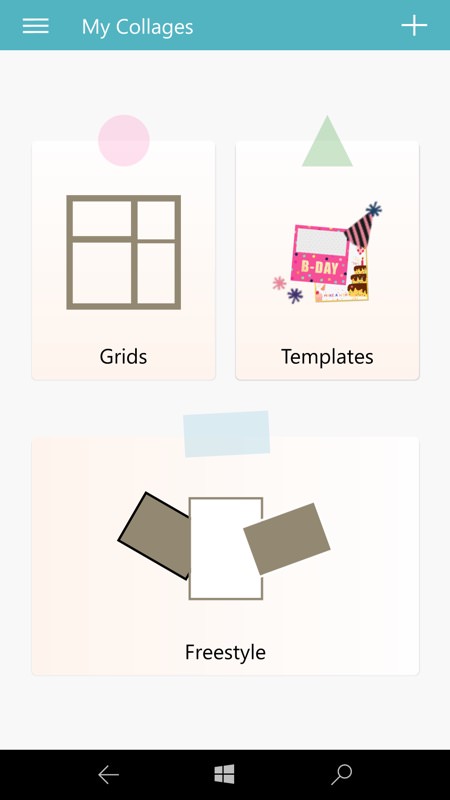 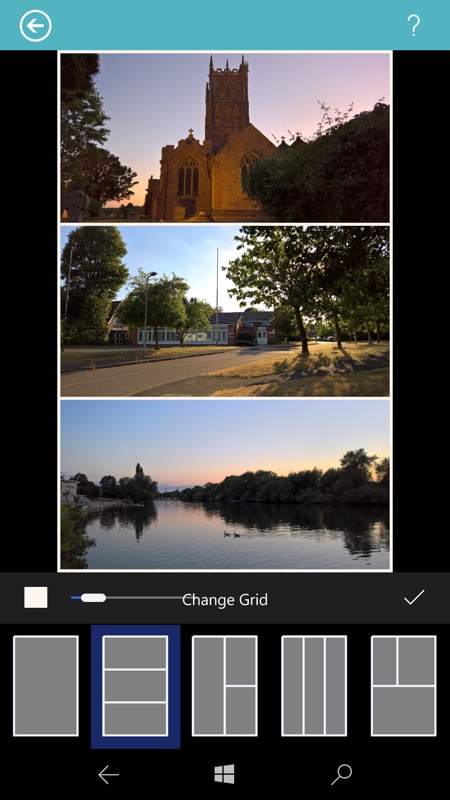 Photo collaging is always popular, especially for sending out mini-snaps of an event to a friend or family member. Shown above right are just the first five in many grid suggestions, going right up to a 3x3 nine photo layout, so it's pretty comprehensive. The slider is to adjust the white borders, by the way.

Once you've got your photo grid, it's time to add stuff, with a helpful UI pop-up hint overlay, shown below, right: 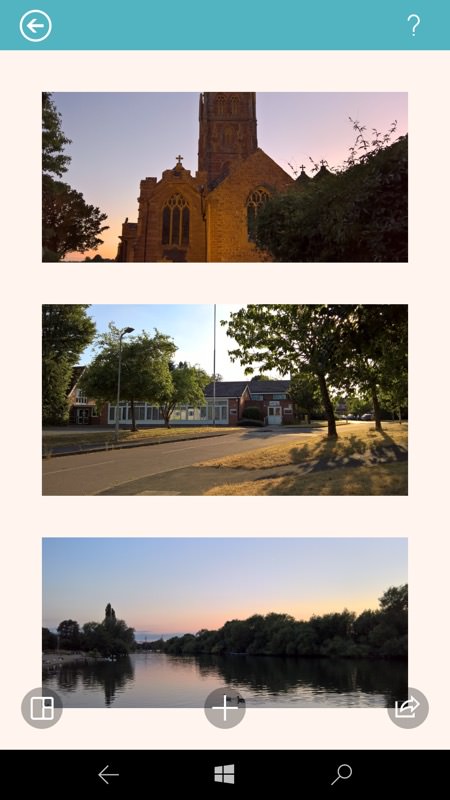 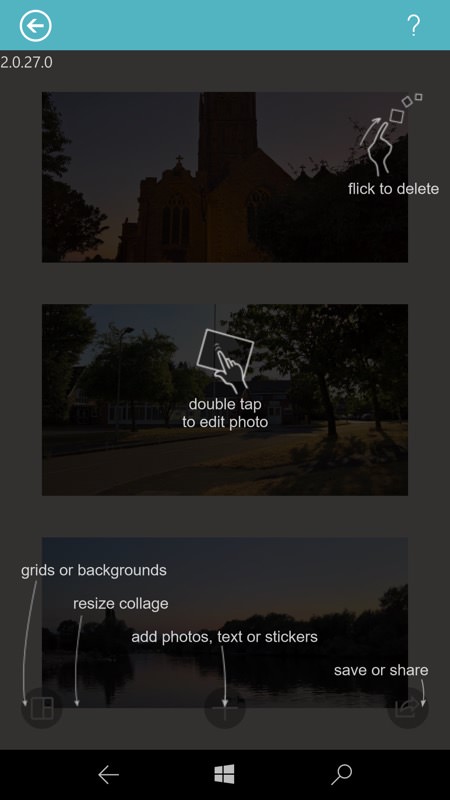 All very slick. I liked the way all your compositions are saved and can be revisited at any times, for minor tweaking.

Although you can just share the photo grid, Pic Collage really wants you to add stuff, since this is the heart of the UI. So extra snaps you've taken, images from the Web, scribbled on doodles, text (again, of which more later), 'stickers', and a change of background. Interestingly, running this on the PC, you get a seventh item, 'Camera', and it seems odd that this isn't available under Windows 10 Mobile, with the phone usually having a far superior camera to a desktop or hybrid. 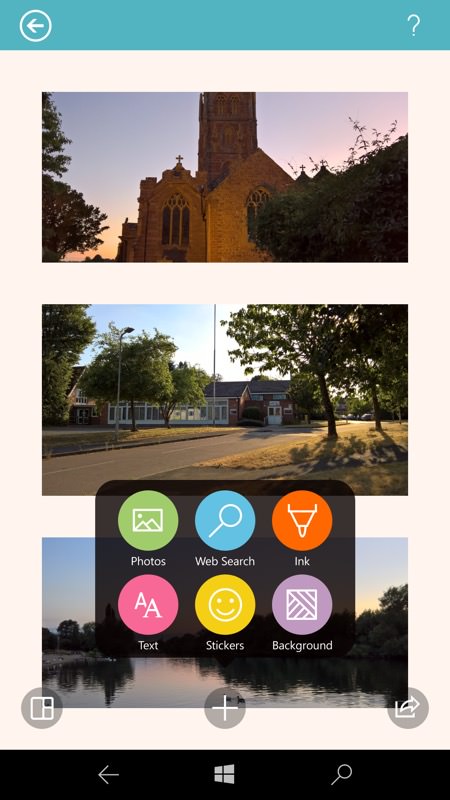 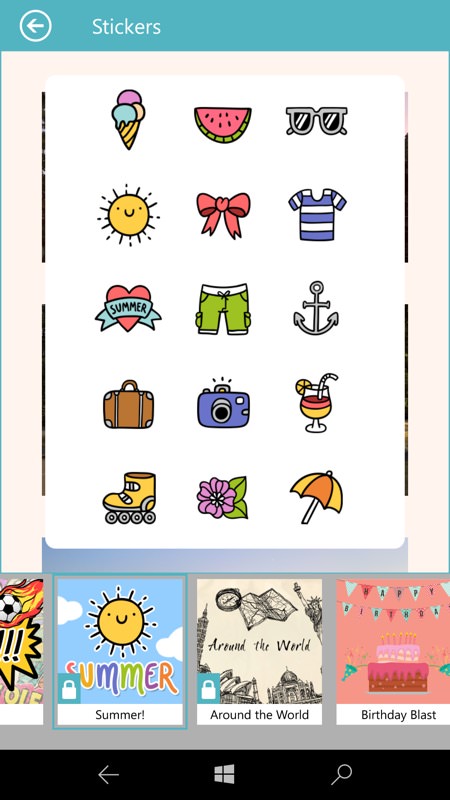 Stickers are... well, stickers. I'm sure other people will like them more than me. There are hundreds to choose from, anyway, sorted into numerous categories. Just select, then position and rotate as needed. I'd say resize too (which you can do, but I'll save that for my text complaint below).

If you don't want to start with your own photos as a backdrop, then 'Templates' is well worth a look - again there are hundreds (which load much faster on Mobile than on the Desktop, curiously), though the small screen on the phone means that you can't read the wording on many of them in the scrolling gallery, so there's a certain amount of trial and error involved. Not for the first time, I get the idea that an application was designed for the Desktop first and then checking it works on Mobile second. 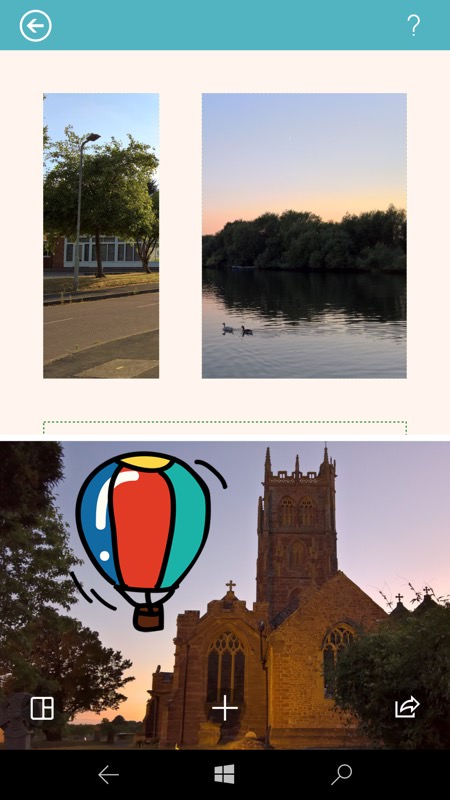 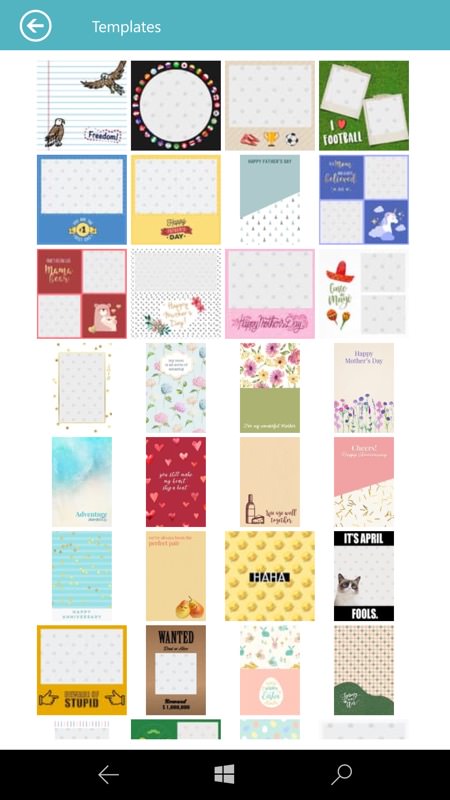 So - on with my main problem with Pic Collage UWP under Windows 10 Mobile. This is easy to demonstrate by adding some text - so here I'm adding a trivial text note to a mothers day image fron one of the templates. You're put into a text editing UI, with a choice of graphical fonts and live preview, though despite the control icons in that UI (two of which looks like font size changers!), all you can actually change is the text colour. So you're left with a hopelessly mis-sized text string: 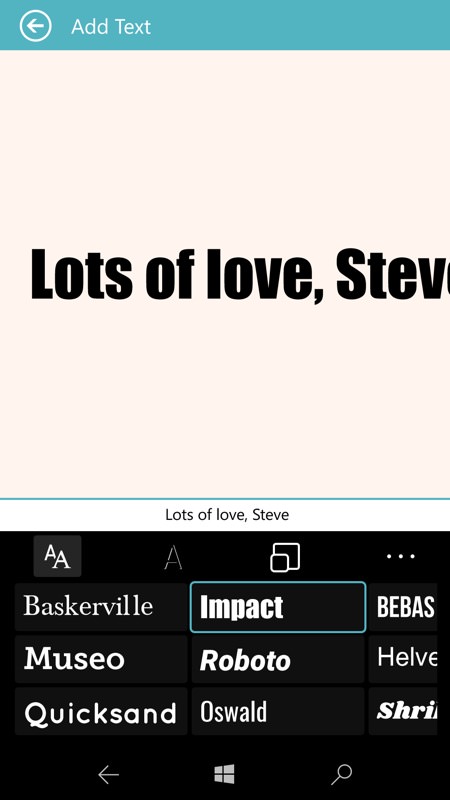 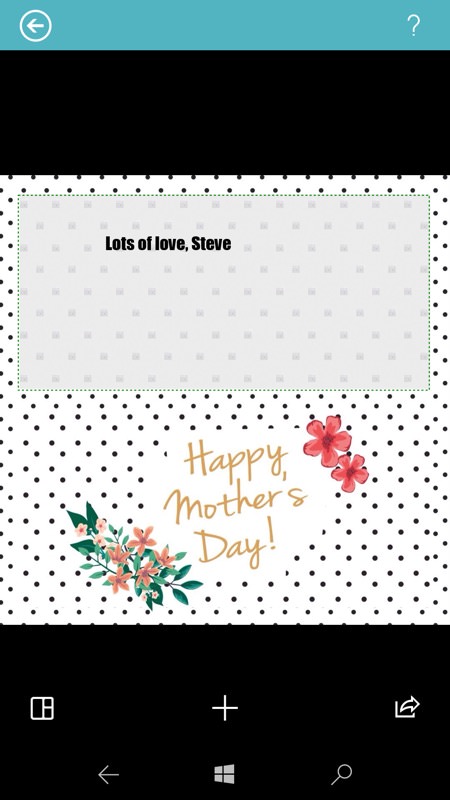 Now, it should be said that I worked out how to change text size in the end, evidenced by the screenshot, below left. You can in fact splay/pinch to zoom in or out, i.e. increasing or decreasing the text element's size. But you can't do this anywhere on the screen, as you'd expect. Having selected the text (noted by the 'rotate' control appearing on the element), I would expect that multi-touch zoom gestures anywhere on the screen would affect the selected element.

But no, you have to use these gestures within the confines of the element on-screen. For a text string which is already small, this is virtually impossible on the phone screen, and this UI mis-step ruins the application overall for me. 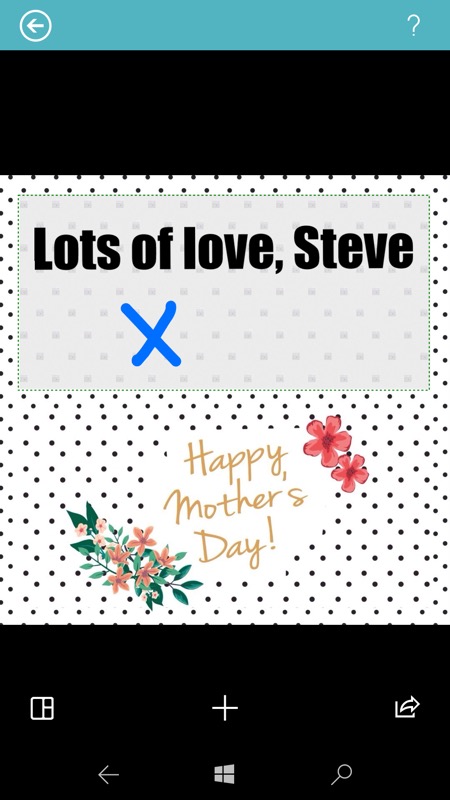 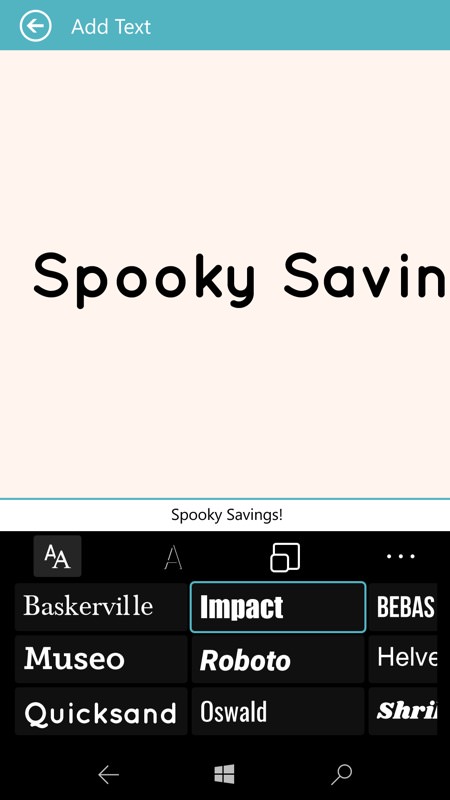 Of course, it's just software and I'm sure the developers can fix this. Some more examples here, including rotating the text element too. Once you get your fingers into the element, i.e. it's large enough, then gestures become practical. But it's a bit of a speed-bump in the UI. 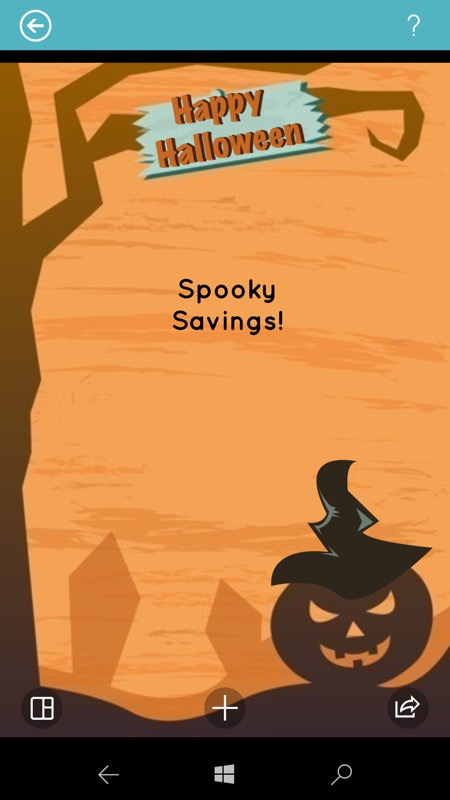 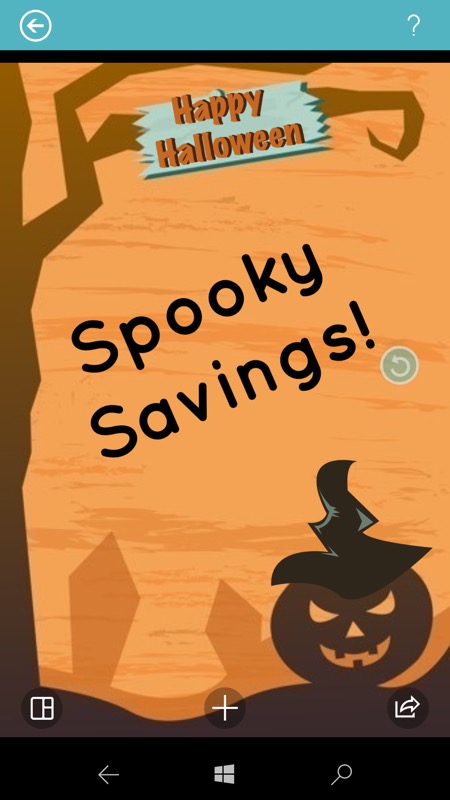 Whether you're going with photo collages or memes/cards made from templates - of some combination of the two - at some point you're going to want to share your creation with others. By default, the (free) application shares at 2MP or so - fine for viewing on phone screens, but if you want to produce something of higher resolution (for example, because of the photos you include) then a not unreasonable £1.70 in app purchase unlocks this. And will, hopefully encourage the developer to carry on working on the project! 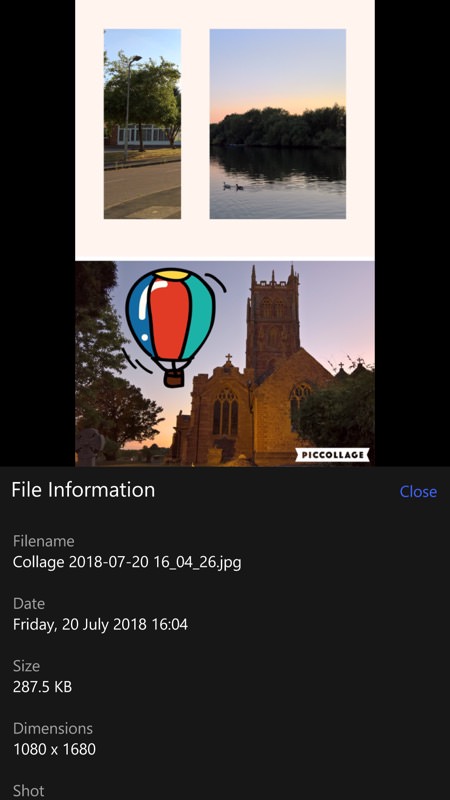 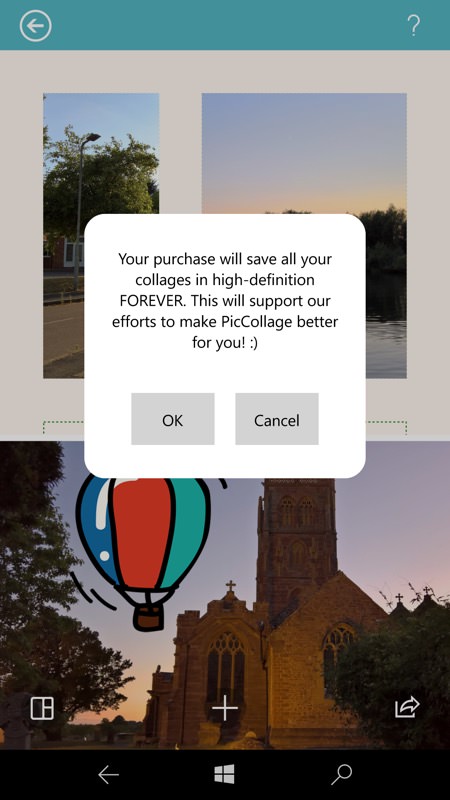 Something of a sleeper application, Pic Collage crept up on me and won me over. If the resizing part of the UI can just be sorted then we'd have ourselves a killer app!