Bluetooth speakers have come on a way in the last couple of years, with some serious speaker cones being fitted to modest enclosures and for modest (sub £50) prices too. A couple of months I reviewed the state of the art, the Tronsmart Element Force, but audio specialists Tribit now have the MaxSound Plus, matching the Element Force in price, dimensions, ambitions, and (almost) sound output, but with a caveat over legacy charging.

And right here there's a problem for Tribit in that it almost matches the Tronsmart accessory but is roughly the same price. And is saddled with a legacy charging connector rather than living in the future. So why would anyone not just buy the Tronsmart Element Force?

But I'll come to all this below. Here's what you get with the Tribit MaxSound Plus: 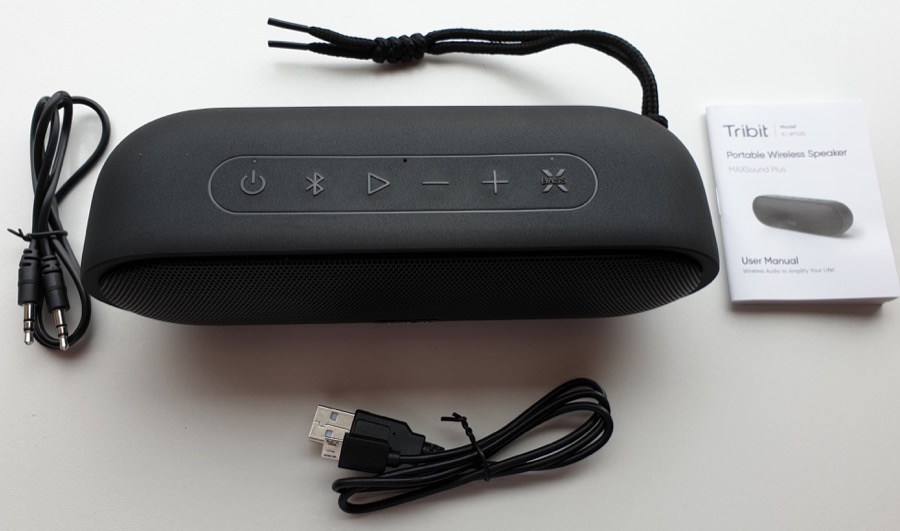 3.5mm aux lead (handy if you don't want to use Bluetooth), microUSB (argh!) charging lead, instructions, nice laced lanyard, and the MaxSound Plus itself...

Full marks for the form factor and finish. Compared to the Element Force (see the comparison photo at the bottom), it's sleeker, more rounded and easier to carry (lighter too, at 608g versus 781g), and slightly less tall, though similar in other dimensions. It's not the sort of thing you'd carry in a pocket - but it's perfect for the briefcase or rucksack, for tunes on the go. 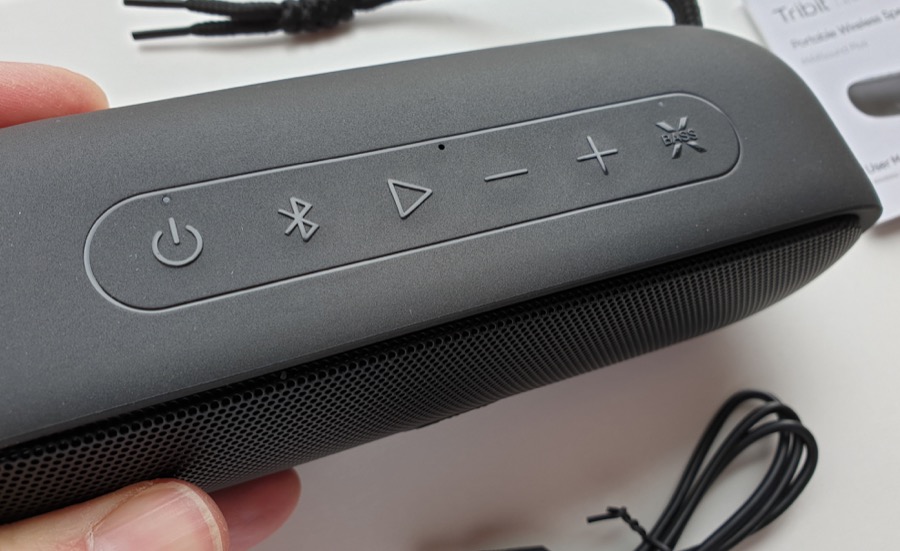 As with other waterproof speakers, the controls are underneath silicone covered buttons. Of note here is the X-Bass button on the end. This gives an extra boost to the bass frequencies and is invaluable - the raw sound out of the MaxSound Plus is very good, but it lacks a jaw-dropping punch at the bottom end, and the X-Bass system delivers just that. 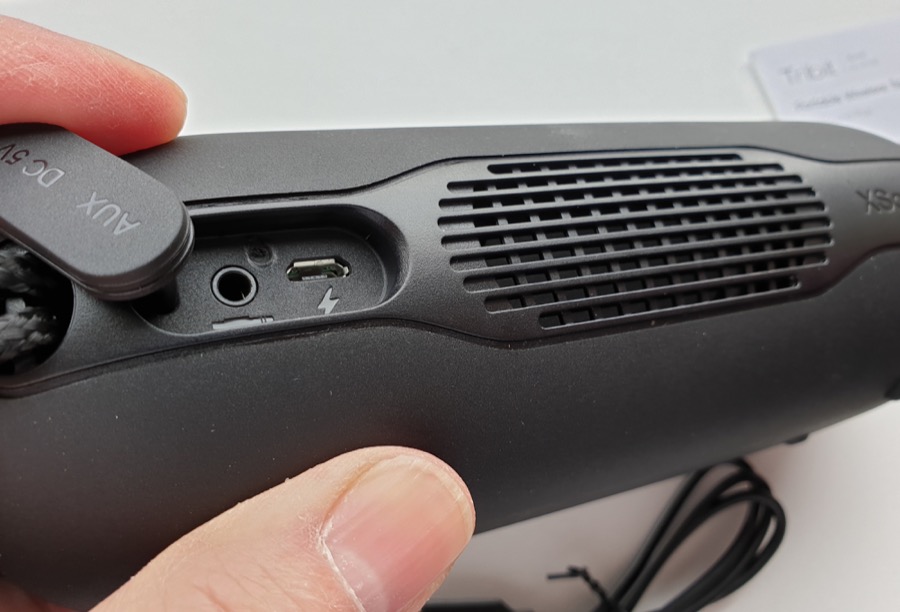 On the back, a water-sealed cover levers up to reveal the 3.5mm Aux socket and a microUSB charging socket. Umm... what? This is a 2019 accessory (it first appeared in January, I believe) and it can't use licensing costs as a reason to avoid USB Type C. So why is this port here? Every mid-range phone upwards now has Type C and more and more accessories are going this way too. Shipping a new design with 'ye olde' microUSB is just unfriendly. 90% of my kit is now Type C and it's a real wrench to have to keep finding microUSB leads to charge or sync older gear. And this isn't 'older gear', so it should have Type C. As the Element Force does. End of. 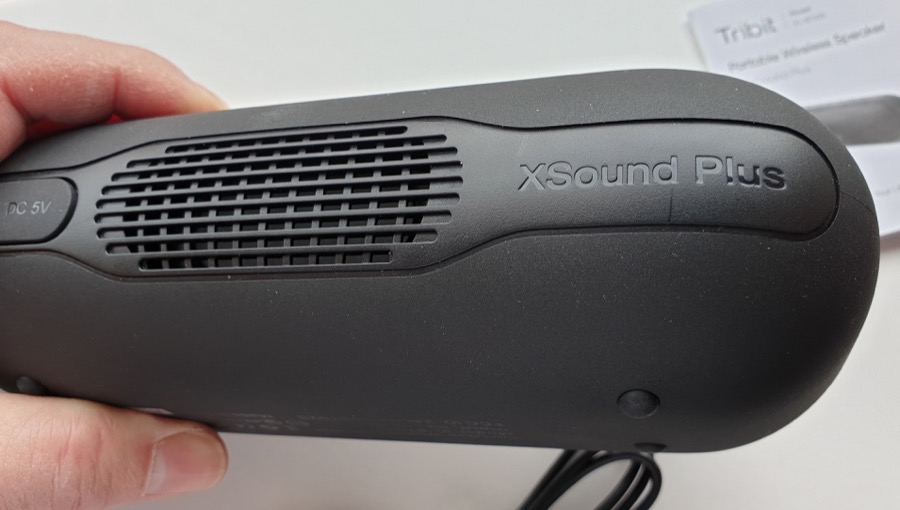 Most of the rear is taken up by the bass reflex grille. And it all works rather superbly, the MaxSound Plus is supremely, loud, clear and crisp, with the X-Bass kicking up bass guitar and bass drums when activated (a little LED comes on, on top of the speaker, so that you can see the X-Bass status)

In fact, this might even be the best Bluetooth stereo speaker I'd heard, but for the existence of that Element Force (again). The latter has 20% more volume and is something of a beast - which you'd expect, given the 40W power output (c.f. 24W here).

Now, this MaxSound Plus is lighter and slightly smaller, but it's still hard to recommend it over its competitor when the latter is slightly cheaper, louder and far more future proof in terms of charging. Battery life is similar on each, by the way, at around 15 hours of highish volume playback.

This is currently £49.99 on Amazon UK and is a good buy - but the Tronsmart Element Force is a better one. Sorry, Tribit, come back to me when you have a Type C offering too. 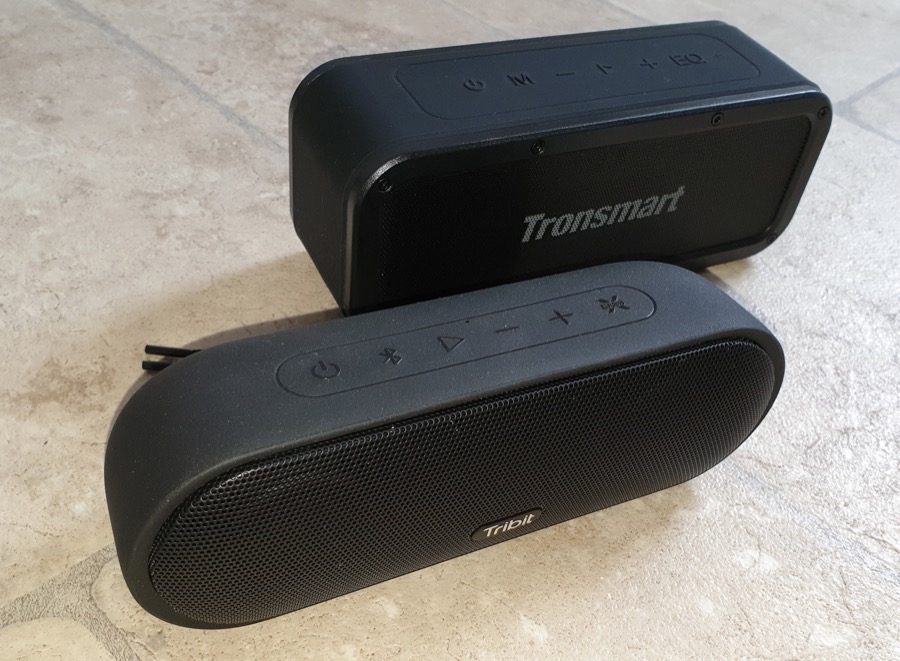