I make no apologies for another Bluetooth speaker review - the last was back in February, looking at the original Tronsmart Element Force - super sound and super ruggedised. This is a sister product with much the same audio capabilities - but there are a couple of new and significant USPs. Not least that this also functions as a power bank, so two accessories in one! UPDATED: with promo code/saving.

The T6 Plus doesn't replace the Force, the two complement each other. The form factor here is cylindrical, not cuboid, making it somewhat more stylish, the idea being to integrate an 'analogue' volume control into the cylinder's top. It's super premium, and clickable, acting as play/pause/answer-call etc. The obvious caveat is that waterproofing is affected slightly, this being 'only' IPX6 (not IPX7, as for the Force). However, IPX6 is still fine for use in rain, it seems, so this is still a good bet for casual parties and events. 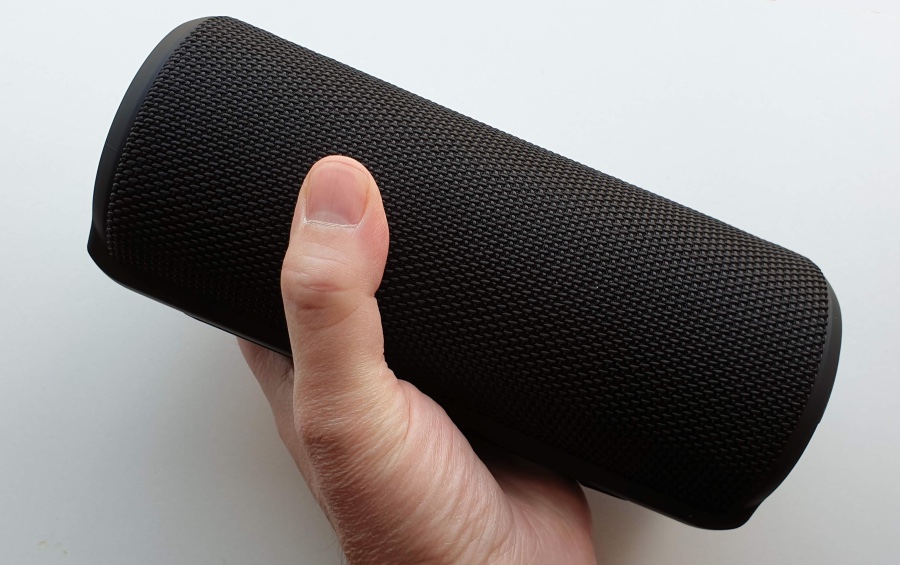 Curiously, given the vertical form factor (controls, volume, bass reflex on bottom, etc.), there's no hanging arrangement up top, whereas on the older Force, with a horizontal form factor, there was an end hook for hanging vertically. Which seems cock-eyed. But there we go - designers, eh? In fairness, the bottom of the cylinder, with the humungous bass speaker cone and 'touchy feely' chromed centre, also has three rubber feet that raise the T6 Plus up from any surface, letting most of the bass sound out. So you can just stand the speaker on a table or floor and it'll be pretty good. 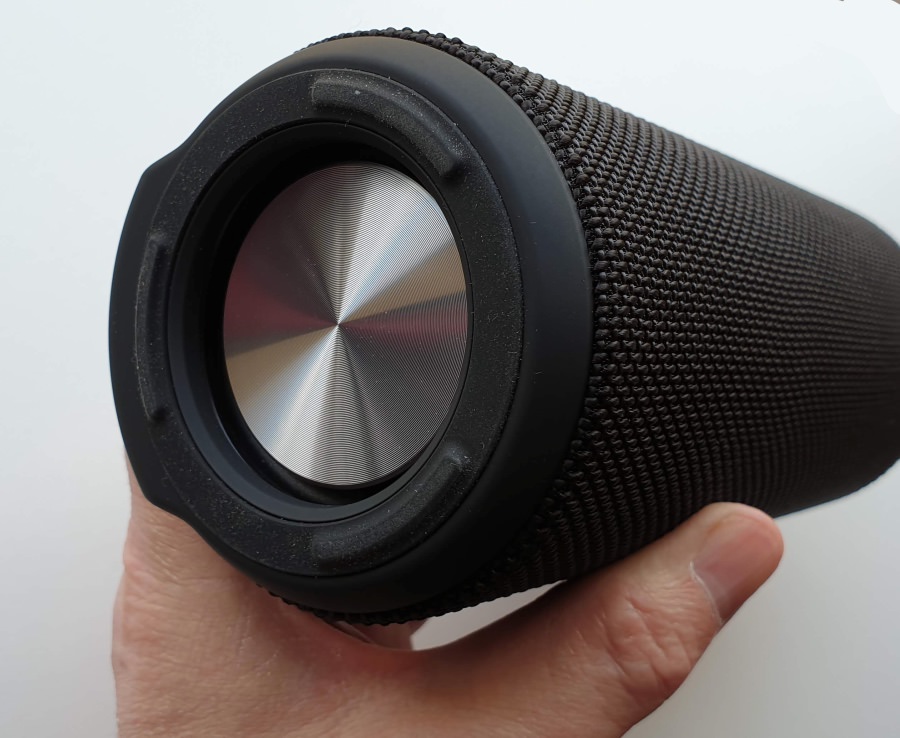 As with the Force, there are three EQ modes, 'Vocals', effectively flat, '3D Deep Bass', with (as it sounds) amplified bass frequencies to suit the hardware, and 'Extra Bass', with all other frequencies reduced in volume compared to bass. In practice, just as with the Force, just leave the speaker in '3D Deep Bass' mode (it remembers) and you're done. It's your full music plus better/'pumping' bass - and sounds fantastic. 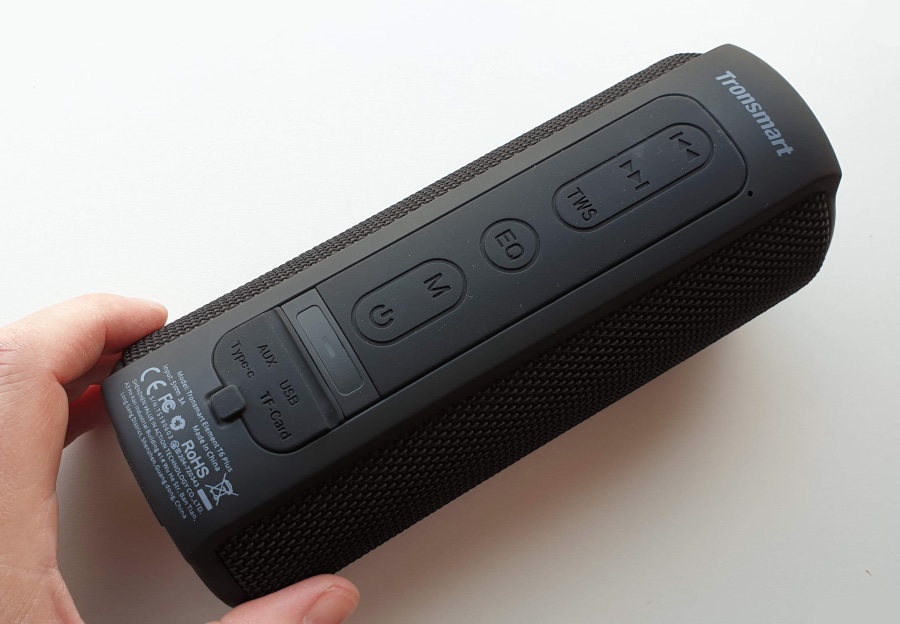 The volume is tremendous and I had to review this when family weren't around, since I was starting to get complaints. 40W output from two stereo speakers (you can hear the stereo if you put your head up to the unit, but that's not very realistic) and the bass driver sounds about right and it easily fills a room in a house. At an outdoor event, on the patio, it's plenty powerful enough for ambient music to fill the garden. Glossy ads for this type of device show the speaker on a beach, providing music for seaside revellers, but that's pushing expectations too far. Suffice it to say that this (and the Force) are the loudest Bluetooth speakers I've ever used.

As with the Force, the T6 Plus stands out in a field of cheaper alternatives by charging from USB Type C and at a full 3A - so no tacky microUSB at 1A, as with much of the competition. Moreover, its 6600mAh internal battery capacity can also be delivered to external devices, albeit at 1A. So you can charge your phone or any other devices while listening! The instructions don't recommend simultaneous use if you want 'stable listening', which I think refers to the cutout in speaker operation when charging is getting going.

It's not clear whether this is a processor limitation in the speaker or something necessary in the Type C electronics, but I've done loads of tests and after the initial pause in playback, once charging gets going then playback is flawless. Having a Bluetooth speaker that's also an emergency power bank is very useful when travelling, of course. And it's a unique feature that I've - again - not seen before. 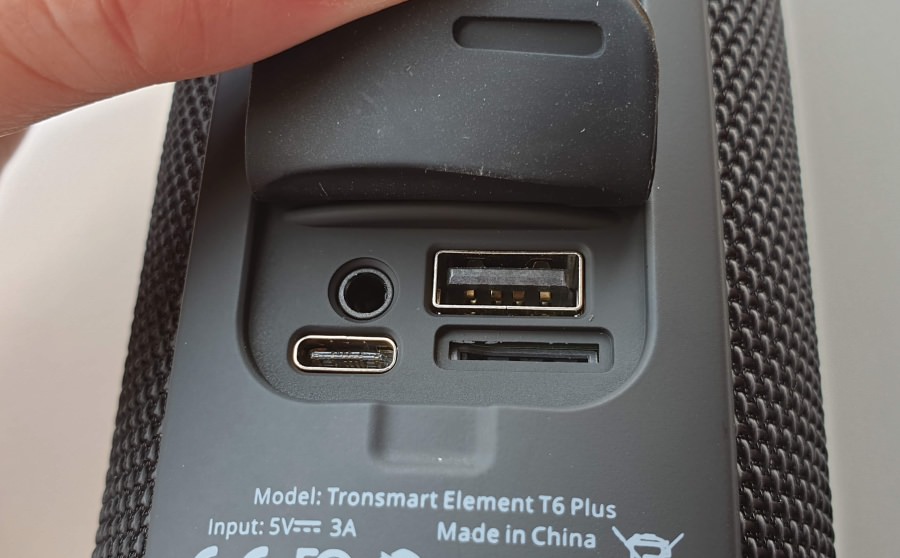 In addition to Type C in and USB-A out, there's a microSD slot, for just inserting a card of music and using the speaker 'standalone', plus a standard 3.5mm audio port (along with a male to male cable in the box). And the 'M' button on the spine switches between these different modes.

As with several Tronsmart designs, there's 'TWS", True Wireless Stereo, referring to pairing two of these to create a full/wide stereo layout. As I only get sent single units then this is hard to test! I did try TWS with the Force and the T6 Plus, but got nowhere. It's possible - and preferable, I'm guessing - that you need to have two identical units for this to work properly.

Although the powerbank function is the geeky USP here, it's the 'analogue' rotating volume control that's the star feature here. After years of wrestling with push button moulded plastic controls on the top of Bluetooth speakers, hoping that I've remembered whether it's single press or long press for each button, and then having to press-press-press, usually quite hard, it's a revelation to adjust volume using a human-friendly rotating control that seems like it's lifted from a high end Hi-fi set-up. The control is also back-illuminated (in blue - of course), if you're listening in the dark and need to find it (or indeed the whole speaker!) easily.

Having the whole rotating control act as a button too, for quick call pick-up or just play/pause, is a lovely touch, and works well. 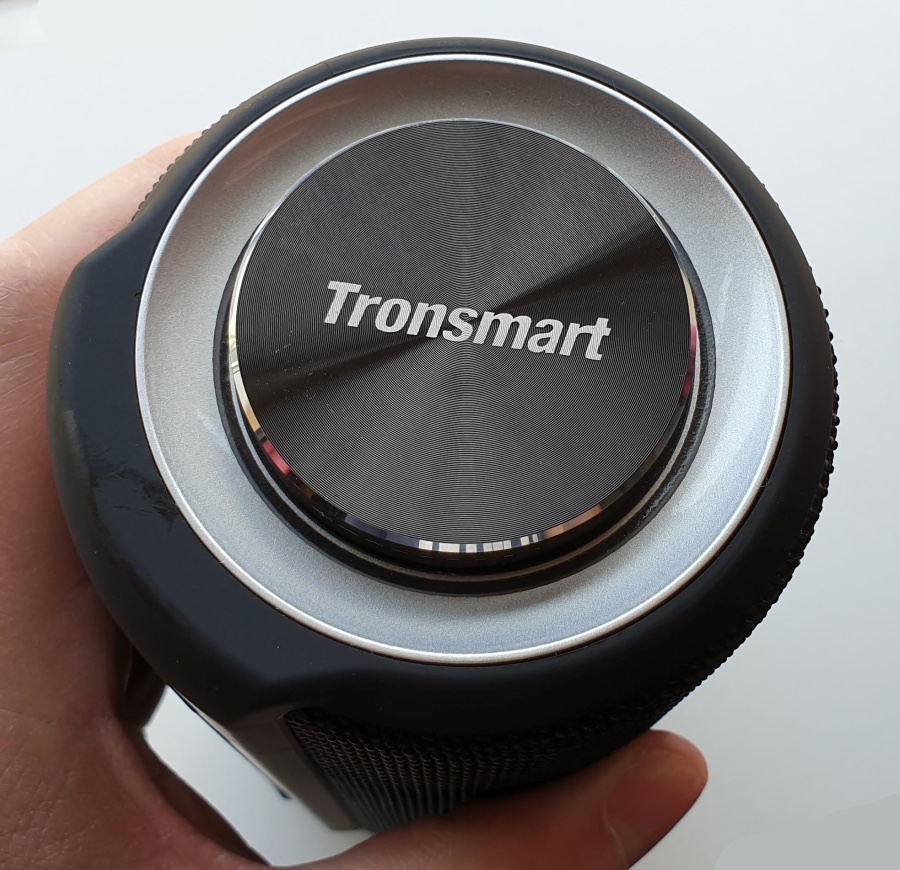 I tested this with Windows 10 Mobile (Lumia 950) and Android (Galaxy S9+) with no issues. The T6 Plus (as with the Force) uses Bluetooth 5 and seems super-solid in its connection and audio quality. There's no aptX or LDAC support, which audiophiles might complain at, but let's face it, if you're using a Bluetooth speaker in the first place then you're not going to expect true High Fidelity. Least of all because you're partly paying here for smart audio processing to enhance certain frequencies and deliver more bass and more general volume. And, to my ears, the standard Bluetooth audio profile/codec sounded just fine.

Playing time is quoted as 'up to 15 hours at 50% volume' and this doesn't seem far from reality. Of course, the point of getting something like this is that you use the high volume and massive bass to good effect, at which point the exponential laws of physics leap in - if you're pushing that much air around with twin speakers then the energy has got to come from somewhere. At an event, where you're playing at 90% volume with the 3D Deep Bass turned on then expect closer to five hours playtime. But it's enough, just charge this fully before putting to the ultimate test...!

Tronsmart makes a big thing of its 'SoundPulse' technology, but take this with a pinch of salt, it boils down to massaging the audio signals at high volume to avoid distortion - see the SoundPulse tech page for the details.

I realise that I've reviewed numerous power banks and Bluetooth speakers over the years, but I genuinely believe that each new arrival raises the bar. Here in terms of interface and flexibility. Comparing the T6 Plus to a Bluetooth speaker from even 2015 is like comparing a Ferrari to a Fiesta! And, as with each new leap forward, the new model replaces the old in my briefcase that goes everywhere with me. The T6 Plus is my new 'go to' mobile sound station. Highly recommended.

This is about 20% more expensive than the Force, but that volume control and the power bank functions make it more than worth it.

It's £54 on Amazon UK as I write this, but I've now been sent this promo code: