It's a fair cop, this new accessory from Xiaomi doesn't connect (anymore) with Windows Phone or Windows 10 Mobile. But it's a good data point as to where the wearables market is going and will be of special interest to any fans of the old Microsoft Band, since this is very similar in many ways - except that it runs for a month on a charge and only costs £30! It's something of a technological miracle, saved from perfection only by holes in the Xiaomi integration into Android's notifications system - and in my phone's battery each day. 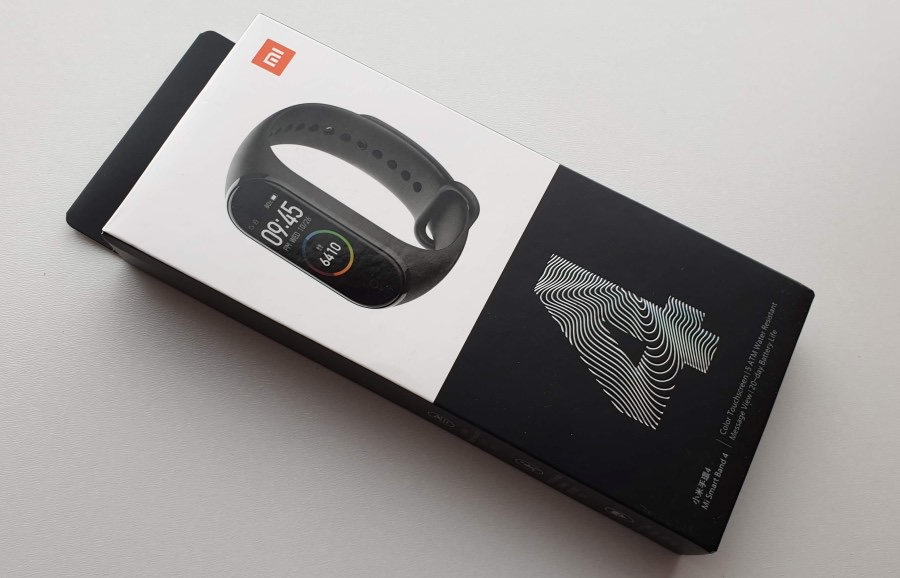 Given that the Microsoft Band and Band 2 (back in the day) were the best part of £200 and given that the current 'market leader in smartwatches', the Apple Watch, starts from £200 and goes typically up to £400, to have a mainstream wearable that does everything that most people actually need for only £30 is quite astonishing.

Definitions are everything, mind you, and Apple enthusiasts will declare that fitness-centric bands like the Fitbit and Huawei and, here, the Xiaomi wearables, don't really count as smart watches. Which is fair enough, but then I'd argue that most people don't actually need a smart watch - they already have a vast array of functions on their phone, so why try and duplicate many of them on the wrist?

So, with that in mind, what do most of us want on our wrist? Here are my baseline requirements, hopefully similar to yours:

Plus many people who are more active than me will add workout tracking, i.e. using location to log where you've been and how fast you got there, even if it's backwards and forwards, up and down a swimming pool.

Now add in light weight and long battery life, two things which everyone would prefer. 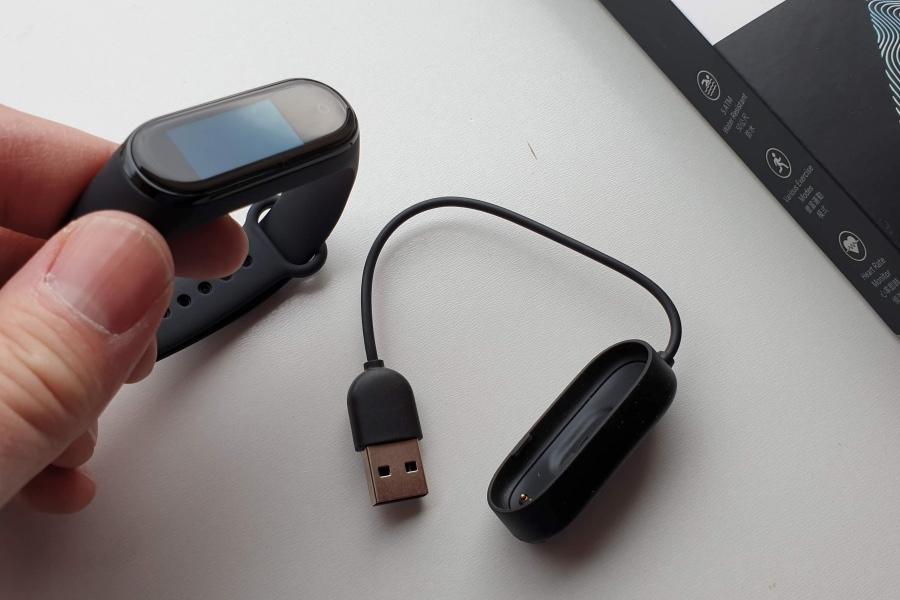 Unboxing this, and showing the simple USB charging cradle, even though you won't need this very often!

Astonishingly, at least in theory, the Xiaomi Smart Band 4 caters for ALL of the above, and adds in weather forecasts for good measure, though do see below my notes about notifications (or rather lack of them). Weight is only 23g - yes, I'll repeat that - 23g, which is light enough that I genuinely forgot I had the device on, and yet battery life is a genuine one month per charge. Which is - again - utterly amazing at this price point. It's like having one's cake and eating it, as they say. 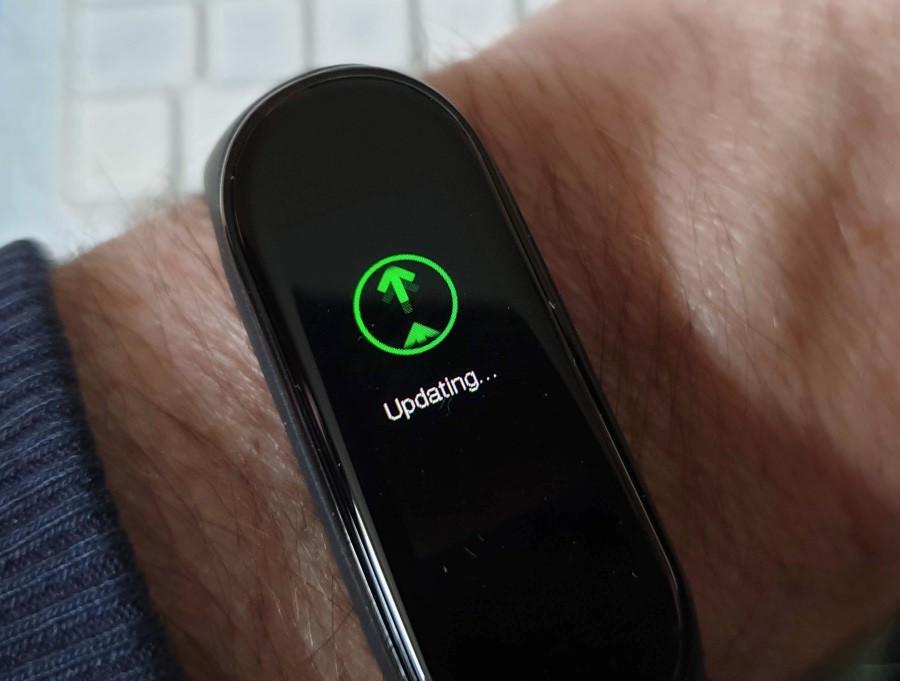 After first pairing with the companion app on Android, the Band's firmware is updated....

Let's start with the physical. A solid plastic oval pill, around 1cm in depth, with a 240x120 pixel OLED display on its front - you can just about see the pixels, even on a small screen like this one, but for the information displayed it's never a problem. Perhaps explaining the extra-ordinary battery life, there's no 'always on' display, so you either rotate your wrist to light it up (which works 50% of the time) or just tap the small capacitive 'home' control beneath the display (which, obviously, works 100% of the time). 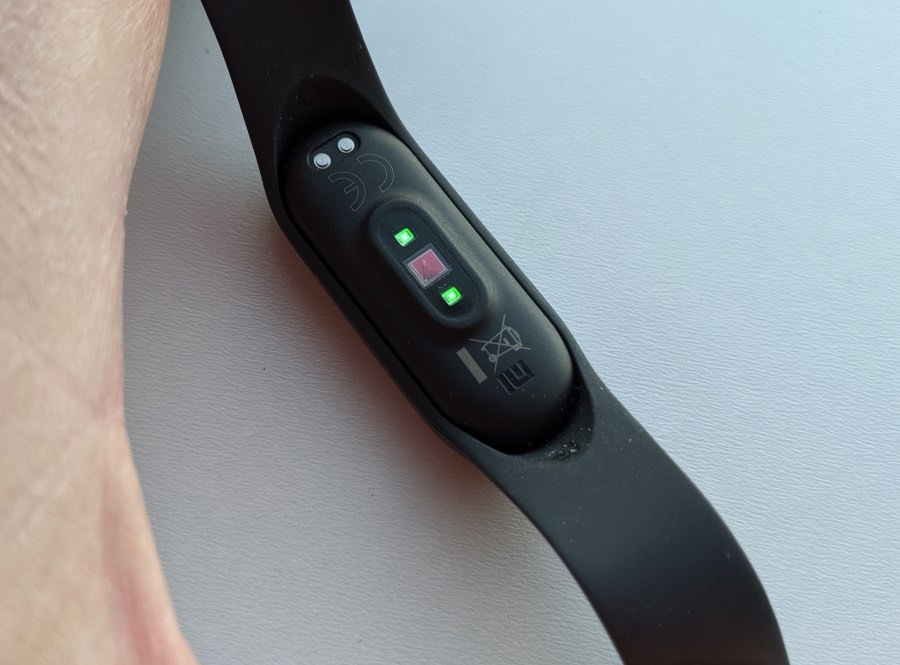 There's brightness adjustment, with five levels, though I found that this needed to be maxed out for readability outdoors. Still, with this set, and with heart rate set to '1 minute' (the shortest available), battery life didn't seem unduly affected - as I write this, battery is down to 74% and I've been wearing the Smart Band 4 for a week, so the claimed month on a charge seems very believable. 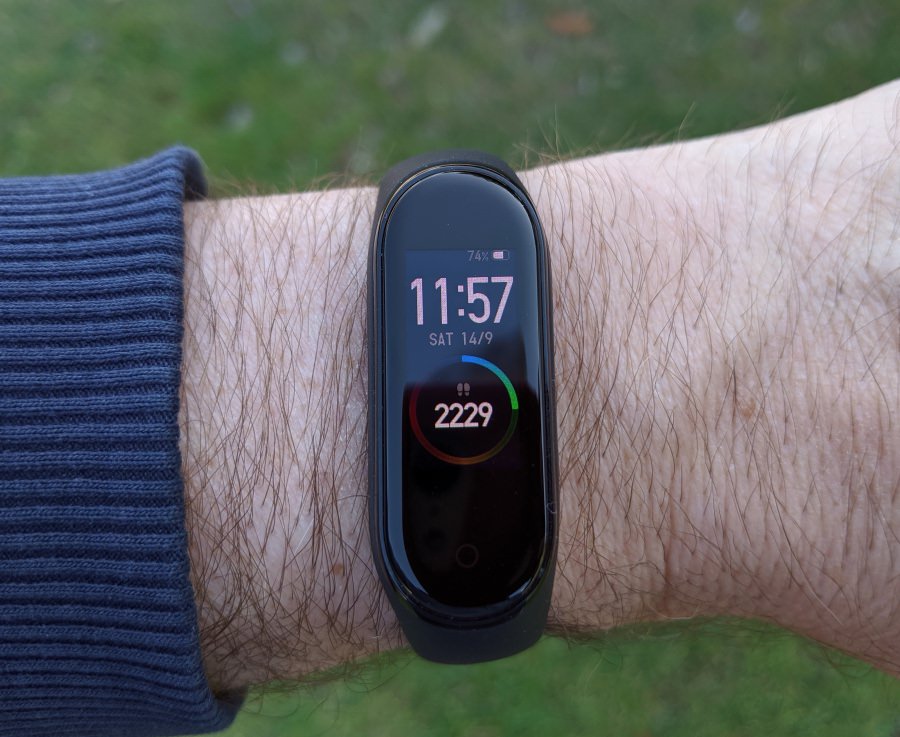 Up and running on the wrist, this is the default watchface, showing battery status (this is after a week of use), time, date, and steps taken so far that day... 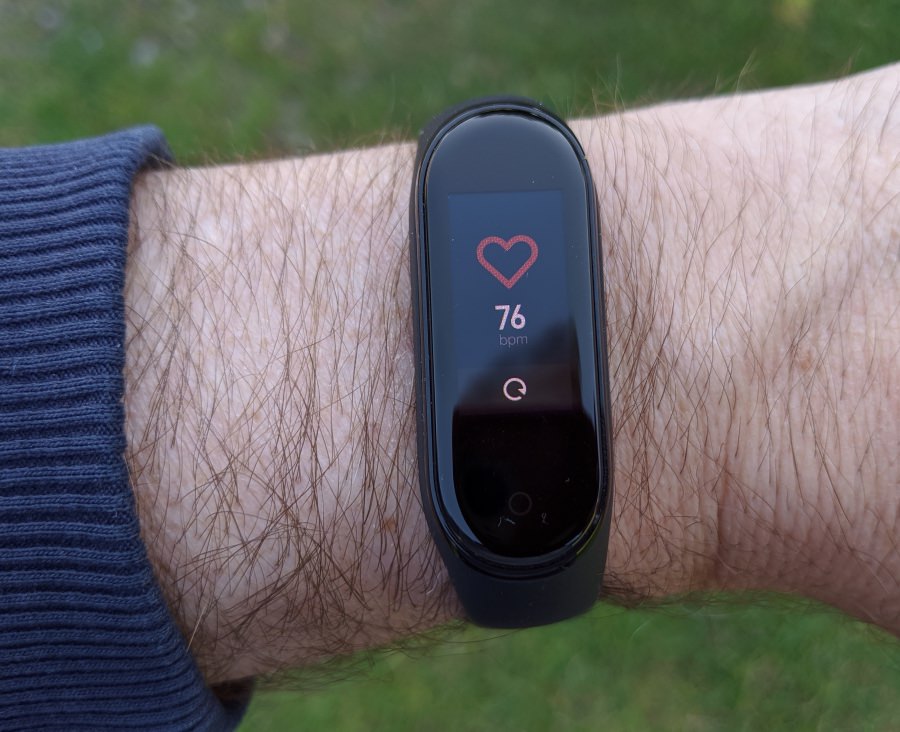 In addition to logging heart rate anyway (for analysis on the app), you can manually check your heart rate, as here.... 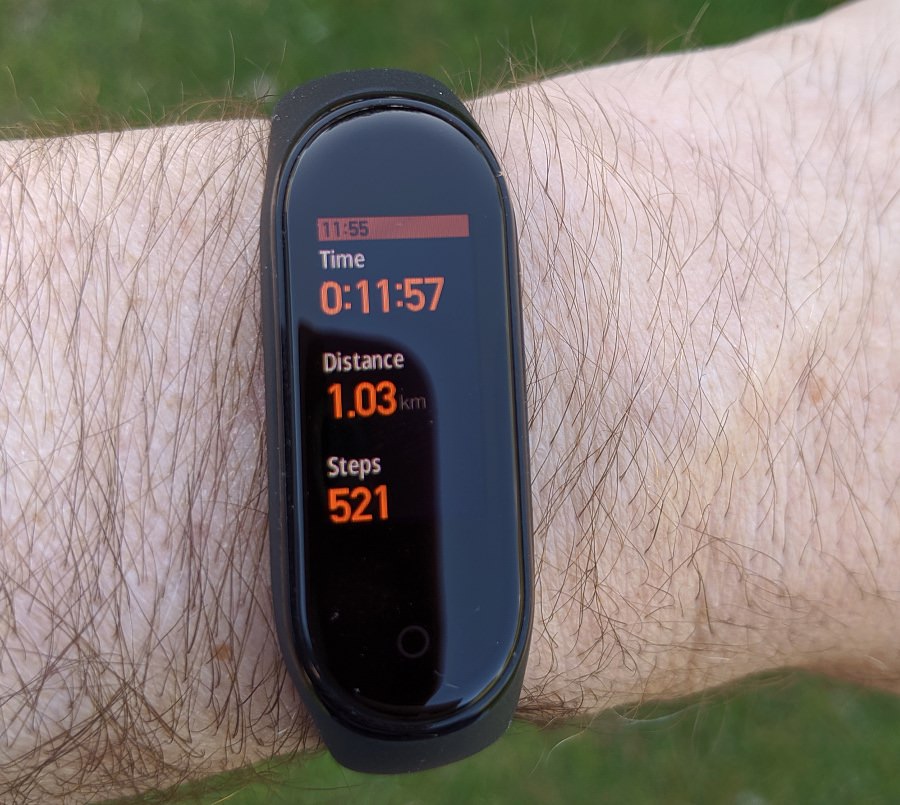 During a workout, it'll log your progress and also vibrate for milestones (e.g. every 1km)

The band is set up from, and synced to, a Mi Fit application in the Google Play Store - this is competent, if not super flashy, and lets you look back at your sleep, your heart rate, your steps taken, and your workouts (walking, running, swimming, etc.) over time. Used as just a watch and pedometer, the Smart Band 4 can be considered to be useful standalone, but you really do need a companion application if you're going to get serious about fitness here.

In the Mi Fit companion application under Android, here's the detailed breakdown of my sleep and heart rate over the last few hours - you can examine your status in surprising detail; (right) some of the heart rate settings, including detection/measurement down to every minute.

Diving into more Smart Band 4 settings, though don't get too excited about 'app alerts', they did nothing for me! (right) there are many alternative watchfaces, though none as good as the default...

By the way, there's no official Windows Phone or Windows 10 Mobile application, perhaps not surprisingly. I did try the third party 'Bind Mi Band' utility, but that's quite old now and wouldn't actually to connect to so modern an accessory. Oh well. I tried!

There's so much to like (battery life, weight, cost) here that it seems churlish to find fault with the Smart Band 4, yet I have to mention some caveats.

Firstly, the notification support advertised is, in reality, non-existent. I tried two different Android smartphones on two different OS branches and worked my way through every set of permissions and help pages and... not a single text or phone call made itself known on the band. Not one. Now, it's possible that an uber-geek and Xiaomi fan might be able to navigate the maze of settings better than me - I've seen evidence that notifications do work for some others. But let's face it, if I can't get these working with all my years in IT, tech suppoert and journalism, and after trying, from scratch, twice, then there isn't much hope for Joe Average trying the same.

Not having texts and calls pop up on the band/watch isn't a showstopper for me personally, but it would have been nice to get this working too. And I can imagine that this aspect might put some people off, even at the outrageous bargain price here.

Secondly, there is a question mark for me about the fastening system on the silicone band. When trying to put the Smasrt Band 4 on for the first time, it took a full 10 minutes and more than a little frustration. Unlike most watch straps, where there's enough friction that you can feed the strap end through the loop and then hold things in place while poking a metal pin through a hole, all you have here is a single loop and a single plastic stud, mounted on a strap that's super smooth. So as fast as you try and fasten the strap it slips away from you! And the insertion of the plastic lug in a suitable hole takes considerable, even painful pressure the first few times. 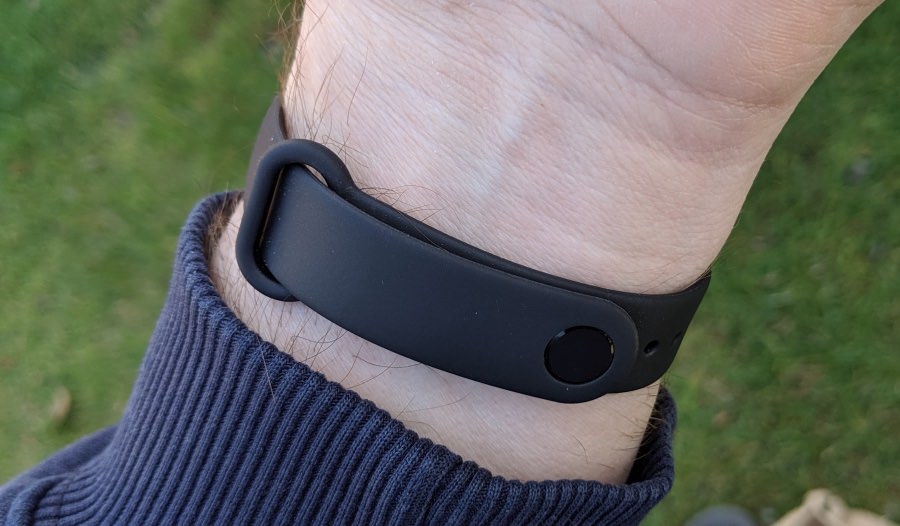 The simple band design - secure when on, but a pain to clip together in real life since the material's so slippery!

Now, this might just be my ineptitude, but it also might be a design flaw - it would help to have three hands, I think! Still, I got used to it in the end and got down to about 20 seconds putting the Smart Band 4 on.

Thirdly, I have to take issue with the Xiaomi Mi Fit companion application, which played havoc with the battery life of the two Android phones I tested it on. In a typical 18 hour day it would swallow 20% of the phone's entire battery capacity. Which isn't good enough in 2019. I think I could accept a 5% hit on phone battery life in a day, in exchange for valuable insights into my health and activity. But not 20%. Sorry, Xiaomi - Mi Fit is uninstalled once this review is published. Now, note that there are plenty of 'hero' Android phones with 4000mAh and even 5000mAh batteries now, where a single application needing 300mAh in a day might not be an issue. So your mileage will vary according to the phone you're using.

If the Xiaomi Smart Band 4 was (say) £80 then complaints like these might be an issue in terms of recommendation. But - again - at just over £30 I'm still impressed by what you can do, what can be logged, by the battery life (at least on the band itself!), and by the value proposition.

...then yes, if this sounds like you, and if you're heading to Android anyway, then the Smart Band 4 is a very decent option.