New UWP applications and games are somewhat rare on the ground in 2020, especially those which have been developed according to (and tested for) Windows 10 Mobile, yet here we are with a Windows port of a largish iOS and Android 'world sim' title. TerraGenesis is essentially a world modelling game, at least in a numerical sense - this is stat-heavy but dressed up prettily enough in pseudo-RPG, pseudo-cinematic form.

I should add that I'm no stranger to this game genre, i.e. a big number-based model with real time elements, dressed up to give an impression of 'things happening' - I wrote an F1 (car) management sim back in the 1990s, for the Psion palmtops of the day. (There's even a modern equivalent, not by me, but using the same ideas with today's phone graphics). So I'm very sympathetic here to what the developer, Tilting Point, is doing here, plus bonus points for getting the simulation onto, not only Windows, but Windows 10 Mobile.

However, I did want to downplay expectations. If you watched the trailer above then you'll have got excited by the surface structure building animations, seeing what you can imagine the game is about assemble before your eyes. But most of what's in the trailer isn't part of the game - it simply sets the scene and atmosphere.

You do get to build hab-units and heating clusters and biodomes and getting to work on a planet, but it's all done through numbers and visualised statistics. The nearest you get to seeing the effect your settlements and actions have is, after much time and effort, looking at the planet from space and noting changes from bare rock to lush planet. Gradually. 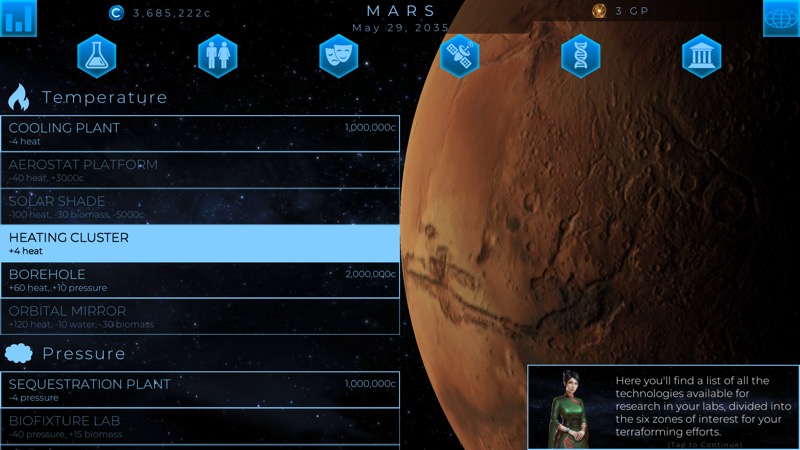 Working through the main control menus... can you manage everything such that your planet warms at the right rate as your population grows? 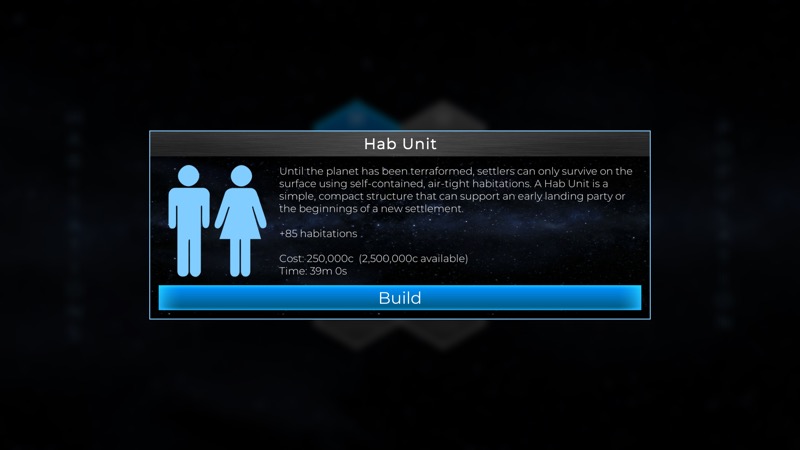 The time-honoured (pun intended) freemium game method of building things in a world sim, where everything costs money and also takes time - being in a hurry, you then pay extra to 'fast forward' construction. 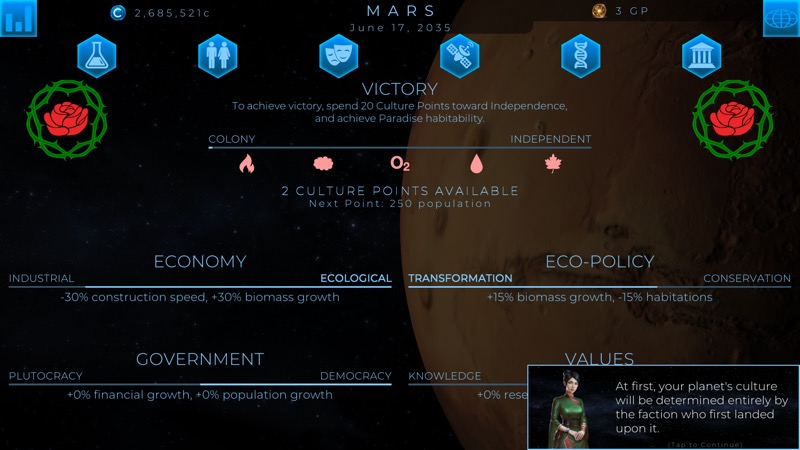 If juggling dozens of numbers in real time while your phone processor takes a hammering sounds like a lot of hassle and work for a comparatively small visual payoff then you'd be right. But on the other hand, a great many gamers have time on their hands and seem to love living vicariously in a virtual number-driven environment. So TerraGenesis will find its niche, I'm sure. Even perhaps on Windows 10 Mobile here. 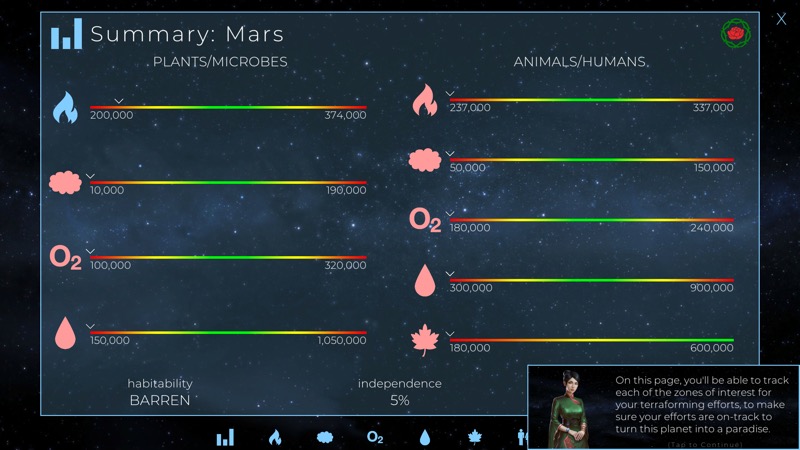 I should note that the game starts up slowly. Very slowly. It's over 30 seconds before the opening menu appears on a Lumia 950 XL. Which is too slow, really, even for a bit game. Once loaded, things run pretty smoothly, even with a planet spinning in the background(!) But the startup delay does indicate that the game is optimised for other UWP form factors/devices. When TerraGenesis is in the background it behaves itself in terms of being dormant and not using resources, but - again - if it gets booted from RAM by other intensive use on the phone (e.g. other large games) then you may have to endure that startup delay multiple times.

While the game is on-screen, an atmospheric ambient soundscape plays and this works very well indeed, with just beeps from taps on the UI interrupting the music.

The in-app purchases vary - £16.74 gets you lifetime access to all additional planets released through the developer's servers, so perhaps that should be considered the true 'cost' of the game. But then there are all the 'fast forward' construction super powers for the impatient - and these are much more expensive. Once you've used up your existing in-game currency on speeding up terraforming, it's £4 a day, and up to £83 a month.

Now, in fairness, you have have a (comparative) blast getting started without paying a penny, as a casual gamer. Taking it slow. So perhaps the freemium angle isn't too egregious here. But be aware that impatience is very costly here. You might be better off having TerraGenesis UWP running on a desktop PC instead, where you can fiddle with things once a day without worrying too much about phone processor power drain or having to use in-app-purchases. 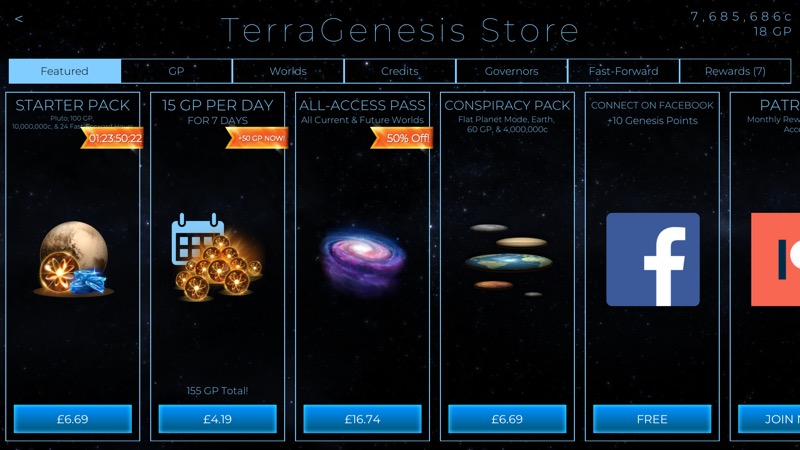 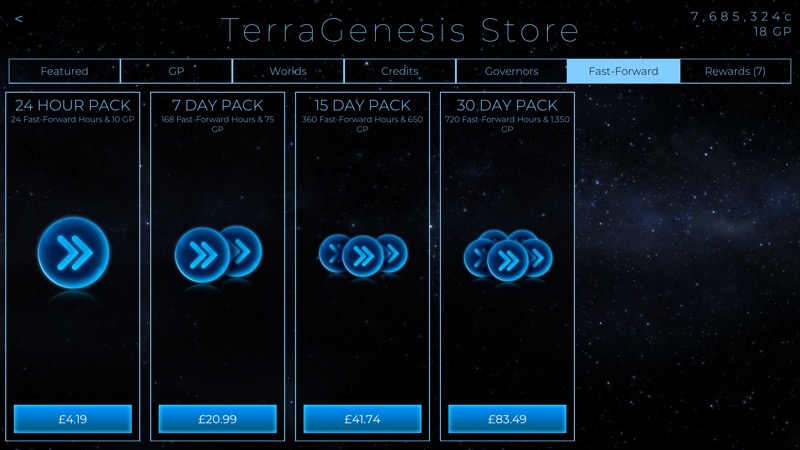 In summary, I'm cheered to see this appear as available for Windows 10 Mobile, but it's not exactly a mainstream 'game' and the start up performance and power drain alone under W10M are a little prohibitive.

PS. I appreciate that I only completed about 0.1% of the terraforming in testing, since it all takes forever, relatively speaking. But I'll embed a 90 minute video below of someone else putting some serious 'walk through' effort and if you have the time to watch it, or at least skim through it, then you'll get even more of an idea as to how the game works: