Something of a triumph of design over materials, these Tribit ANC (Active Noise Cancelling) headphones were sent in for review and end up being terrific value for money, with a number of thoughtful touches. Given that many ANC headphone sets, including those best thought of, come in at well over £200, to have these in hand for £60 is rather impressive. Especially so since these charge via USB Type C, i.e. your usual phone charger and not cheaped-out microUSB. Add in being almost infinitely adjustable, being able to use the ANC without even powering on the main Bluetooth circuits, and even plug in ye olde 3.5mm cable, and these are definitely worth a review. 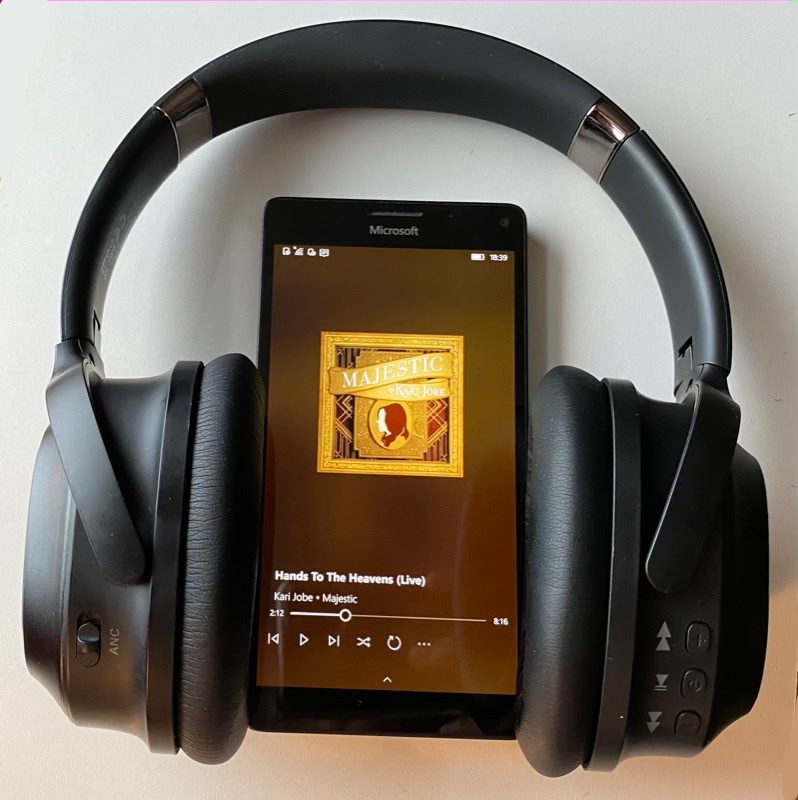 Hooked up to a Lumia, though they work with just about anything, happily. There's no companion app to worry about or complicated set-up, and the ANC is all done in the accessory...

The mechanics of folding, swivelling headphones are well known, but what's surprising on picking the QuietPlus 72 up are how light they seem - this is down to the use of plastic and faux leather throughout. Built down to a price in terms of materials, it's possible these might not last as long as the market leaders, but then £60 buys you a brand new pair, so the materials can absolutely be forgiven. Oh, they only come in black, by the way, which seems a shame. Given all the plastic, you'd have thought that some colour options wouldn't have gone amiss. 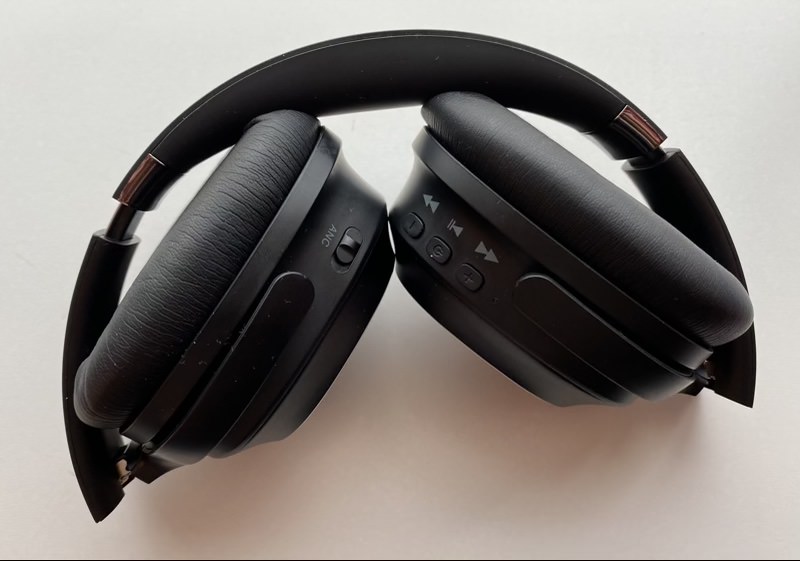 There are various ways to fold this set - here's one way! It all depends in what bag or case you need them to fit!

The lightness of the ear cups, along with the 1cm (only) padded cushions, means that the QuietPlus 72 feel as if something's missing in terms of weight and substance, but in fact everything you need is present and correct. In fact, more than you probably need.

On the left cup is the main ANC toggle switch. Turn this on and the active microphone system listens for and then cancels out up to 32dB of constant noise. So kettles, fridges, fans, plane engines, train roar, that sort of thing. It works really well, spookily so, and it works completely independently of the main Bluetooth circuits, so if you don't want music and just want silence then this is the way to go and save a load of power. As usual with ANC, sudden or unpredictable noises aren't cancelled out - so voices and announcements (e.g. in a plane or train) will still come through, albeit a bit muted. But that's par for the course. Plus there's the extra passive isolation of having your ears encased in the cups. 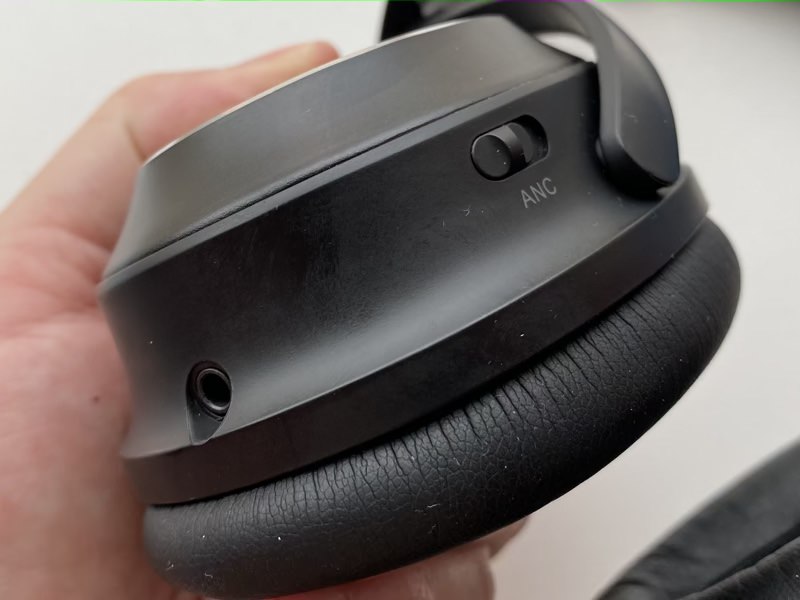 The 3.5mm jack for wired input, plus the main ANC on/off toggle. Note also the faux-leather pads, around 1cm in thickness - I'd have liked to have see a little more foam for a really comfy fit!

On the right cup are the nicely-profiled Bluetooth and media controls. So volume up/skip forwards, power/play/pause/voice-assistant, and volume down/rewind, as usual. The Bluetooth status is announced at each stage in the headphones by an unfailingly cheery English voice. I tested the QuietPlus with a number of genres and tracks and output was pretty decent, though obviously not completely top drawer. But the 4cm speaker drivers in each ear are easily enough for most people, especially those testing out the whole concept of ANC without forking out £200+. I'd rate the output at 8/10 compared to my other reference headphones.

What's curious is that this is without ANC turned on, i.e. as traditional Bluetooth headphones. When ANC is activated, the audio output (i.e. music) is notched up significantly, in volume and processed 'loudness' - and this I wasn't expecting. I'm guessing that part of the internal algorithms to remove the external noise include programmed boosts to bass and treble (after all, why not, since the waveforms are being messed with anyway?) but I like the result - ANC plus extra music power! 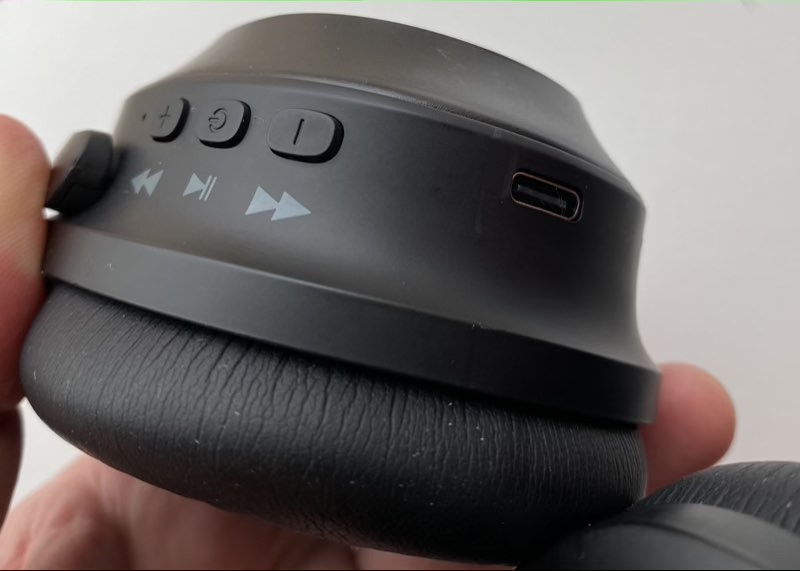 Having said all that, the QuietPlus 72 could have been a little louder. I'm wondering whether some EU regulations are being adhered to here, but I was up at 90% volume most of the time on my various test phones, i.e. without much margin. So quieter tracks could have done with a little more oomph - I do like plenty of volume when listening to my prog rock!

The ports are on the bottom of each cup. On the left, a traditional 3.5mm jack, though a cable wasn't included with the headphones. But I'm sure most of us have lots of 3.5mm to 3.5mm jack cables, and with this connected the headphones obviously don't draw any power from the internal batteries. Plus you get maximum quality and zero latency - but don't set me off on yet another pro-3.5mm rant...

On the right, a Type C charging jack. So many cheaper accessories come with microUSB still in 2020, which is frustrating, so it's good to see this bang up to date and easy to charge from your standard phone cables. Tribit quotes 30 hours listening on a full battery with just Bluetooth circuits engaged, or 15 hours with ANC also turned on. Both of these figures are a bit optimistic, but still ample for most use cases. 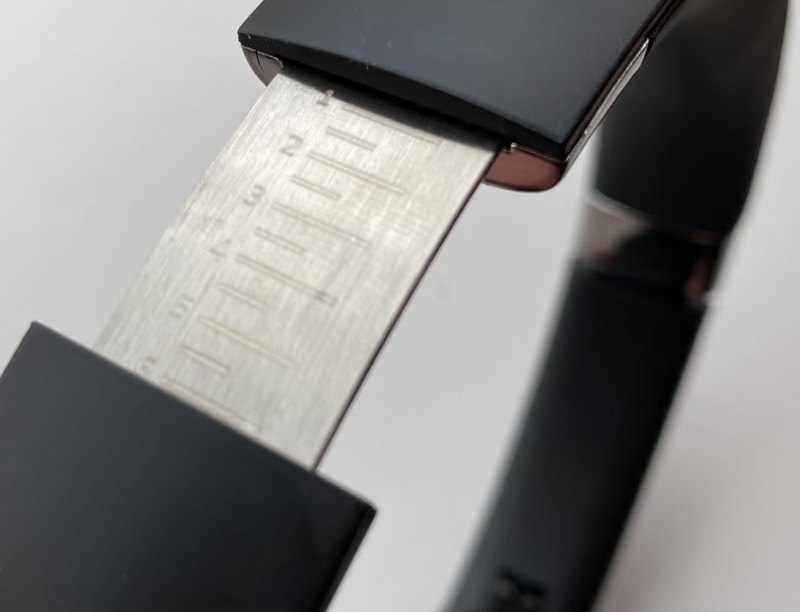 Impressive attention to detail in the head adjustment bands - and yes, these ARE metal - showing graduations, so that you can note and remember your preferred set-up after folding or lending to someone else?

One interesting caveat to all this is that because the ANC is a separate circuit, it's easy to leave this turned on. I.e. you finish listening to music on the train (etc.) and power down the headphones using the main Bluetooth power button. But what you've forgotten is that the ANC may still be on and needs turning off separately. I'm not sure how Tribit could have got around this without reducing flexibility - perhaps an audio reminder when powering down, e.g. "Power down, remember to turn off ANC!"

All in all I was impressed with the QuietPlus 72 though - they're large, to fully encompass anyone's lugholes, and not too heavy, yet with lots of wired/Bluetooth/ANC options to play with. Some reviewers have pointed out that there's no 'companion app' to update the firmware, but I think that sort of facility at £60 is too much to ask.