Twitter clients on Windows Phone for the end of March 2015

Group tests of Twitter clients on any platform are always a little transient on any platform because of Twitter's own (crazy) client token limits, meaning that any third party application that gets really popular effectively gets shut down when it gets to 100,000 users. Such was the fate of several applications on Windows Phone, with Mehdoh and Rowi bowing out for this and other reasons. Begging the question at the end of March 2015, with a very serviceable first party client for the platform, of whether it's worth going third party at all any more and if so, which application to choose? This is my much updated look at Twitter clients, now with six apps in the mix. 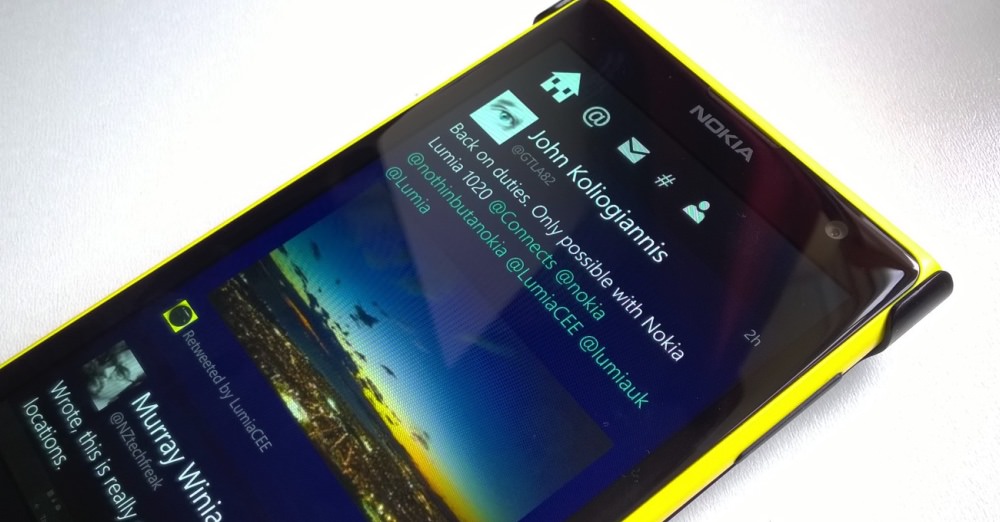 Twabbit, MeTweets and Peregrine all have long histories on Windows Phone yet each having stayed out of the limelight enough to still be below the Twitter token limit (though Peregrine had a recent scare!). Here's hoping that this AAWP feature doesn't push them over the edge! Tweetium and Aeries are brand new and commercial, though very polished, while the official client has no restrictions on ultimate success, while being free and fairly fully featured.

Now, obviously, each person's personal preferences when it comes to a Twitter client will be slightly different - the 'features' listed in the table below are what I personally require from such an application, and hopefully I'm not too atypical.

NB: If you're viewing this on a portrait-screened mobile device then you might want to switch to landscape, to fit the table in. Or switch to another device, if you still have issues - Windows Phone 8's Internet Explorer is quite limited in how it handles tables.

++ i.e. battery above a certain point or on mains charging, on wi-fi, etc.
* Purchase of Tweetium Pro (i.e. beyond the base cost) does get you multiple accounts
** Purchase of Pro version also brings in push notifications, base version just has live tile updating

The table above looks pretty even, with a maturity in all the clients that surprised me - I guess the base set of functions in a Twitter client is pretty well known by now. Two things are worth picking out in particular.

Firstly, one of the failings of many Windows Phone Twitter clients is that they fail to make the most of a smartphone's limited screen real estate, each having bulky top-of-screen furniture - Tweetium bucks the trend here, closely followed by Aeries, both with perhaps the benefit of recency in their favour, with options to hide the system status bar at the top, with minimal furniture of its own and with the option to minimise the bottom of screen toolbar. For both applications, the end result is a full centimetre of extra screen space for showing content, vital for a Twitter client, to reduce scrolling.

Staying up to date

Secondly, note that each of these options is significantly better than the official Twitter client in terms of timeline updates. Here's what most people do these days on Windows Phone when checking Twitter (especially using the official client):

There are two possible solutions to this rigmarole. One is to use a background agent that polls Twitter and grabs tweets on its own, running approximately every 20 minutes and loading in new content from Twitter. The upshot is that I can, for Peregrine, Aeries or Tweetium:

In other words, give or take up to 20 minutes (depending on where in the background update cycle I happen to switch in), the main timeline, mentions and messages are all up to date and there's no extra manual refresh needed. Unless you want tweets that are up to date to within a few minutes of 'now', that is. The 20 minute cycle is part of the Windows Phone architecture for background tasks (the period is actually quoted at '30 minutes', but this is allows for some delays caused by other agents and applications). In practice, most background agents get a look-in every 20 or 21 minutes or so.

The second tactic is to work with Twitter's streaming API to access individually streamed tweets when the application hits the foreground. Although most of these clients 'support' Twitter streaming, monitoring them all over a period of time on multiple devices, it's clear that Tweetium and Aeries are ahead of the pack.

Tweetium also auto-positions your timelines at the most recent tweet, which I love, and Aeries has this as an option. In practice, this means that you can switch back to Tweetium or Aeries from anywhere, and within a maximum of about three seconds, the timeline has refreshed with latest tweets and you're looking at the most recent. It's not clear exactly how much of this is down to streaming and how much to clever coding and interrogation of Twitter's other APIs, but the system works well.

Each client has its selling points, of course. MeTweets has lots of bells and whistles, boasting the ability to post tweets longer than 140 characters by splitting them and then auto-joining them when echoed back, though this doesn't help other people on a myriad other platforms, so I wouldn't encourage this. MeTweets also has 'Readability' baked in - double-tap to bring up a tweet and then you'll find this on the menu for any links contained in the tweet. Plus you can set up 'scheduled tweets, for unattended posting.

In return (and apart from the attractive 'free' price tag that's getting it into trouble near the 100,000 user mark), Peregrine opens all links in an integrated browser that reformats pages to fit - and from here you can open up in Internet Explorer or save to (the actual) Readability. There are few gimmicks in Peregrine, it's nicely pitched to 'do what it says on the tin', and I have a soft spot for it, in view of the price (i.e. easy to recommend) and guaranteed near-currency of its timelines, but it's looking very dated in 2015, unsurprisingly. While Twitter, the official client, has the guarantee that it has no artificial token limit applied and it'll never become unsupported or withdrawn.

Twabbit's main USP is the sheer customisability, from massive control over text size and font to backgrounds, to filters. Plus there are extra gestures and even voice commands, multiple languages and Readability baked in, so there's little that it can't do. Twabbit hasn't seen much development in the last year though, and it needs to stay more current.

Then we come to the two heavyweights, Tweetium and Aeries, matching each other feature for feature, both with rock solid operation in foreground and background, both glossy with rich interfaces and both offering the option to open up the on-screen real estate as far as possible. That both are commercial, requiring (shock, horror) real money to acquire is, I think a very good thing. It means the developer is getting paid and that means continued support, plus the price will put off habitual downloaders, so there's a real chance that even if Windows Phone and Windows 10 are huge successes, the number of users ever signed into Tweetium or Aeries will still remain less than Twitter's arbitrary limit.

The one off cost of Aeries (even for multiple accounts) is attractive, plus I loved the graphical live tiles, which can be stunning when they work. The vagaries of Windows Phone background agents mean that, as I write this, the developer (Brad Stevenson) and I are still trying to work out why the live tiles just.... stop sometimes. I'm sure Brad will sort it out, he's been very active so far. The relative immaturity of Aeries also shows in that there's no support for embedded Twitter videos yet. Aeries is in a clear second place but the winner here, by a nose, is....

Tweetium, despite the way you have to pay twice, in effect, if you want push notifications and multiple accounts - the app edges this round-up, at least at March 30th 2015. Everything just... works, including embedded media, while the purely textual live tile stays up to date with what people are saying about (or to) you and you can even use the exact same application on Windows 8.1 or 10 on the desktop as well, for the one purchase.

Your comments welcome, of course, to this updated round-up. I'm sure I'll need to revisit this in due course as further application updates occur. 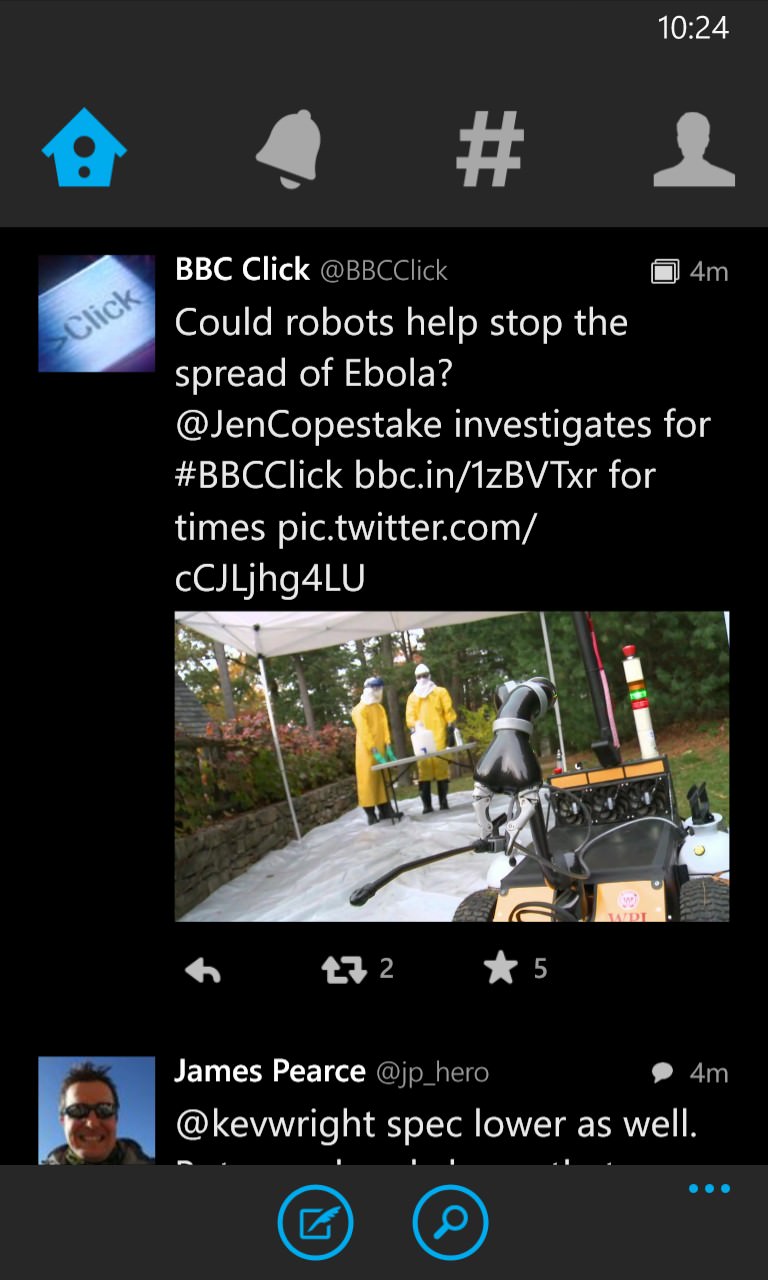 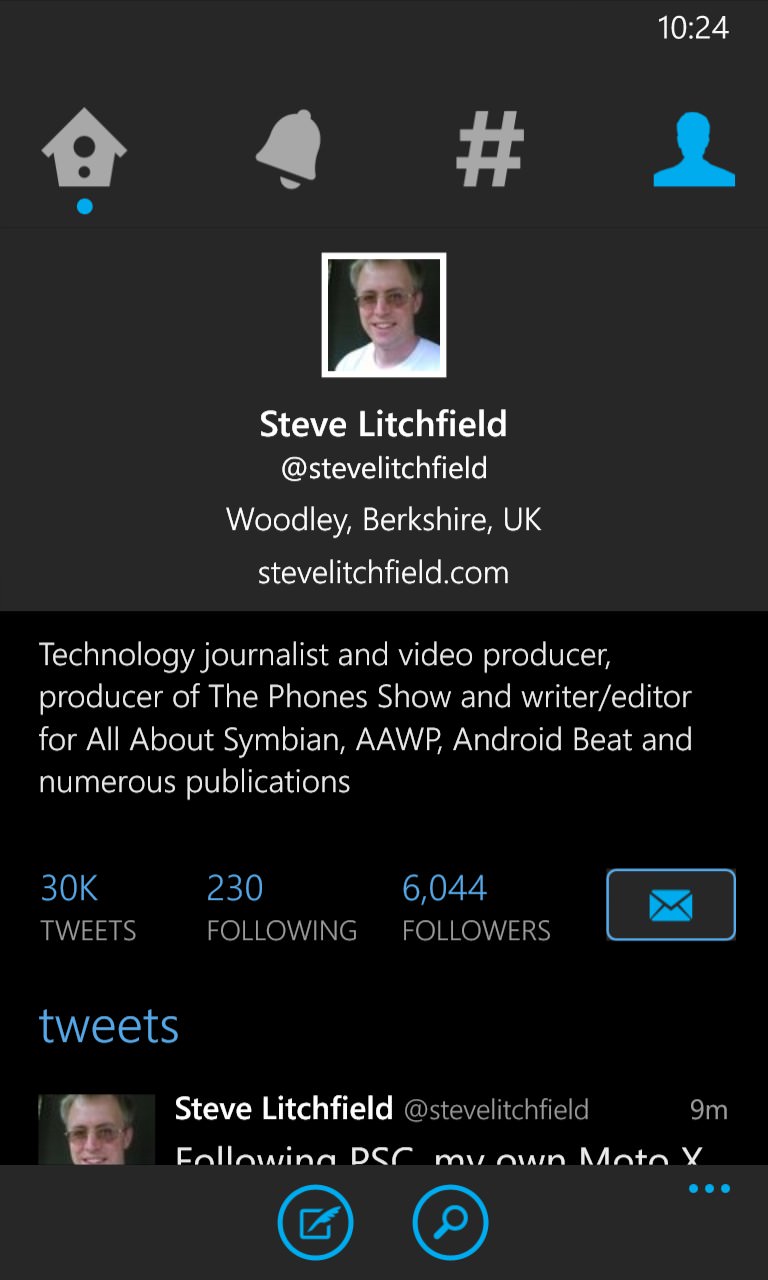 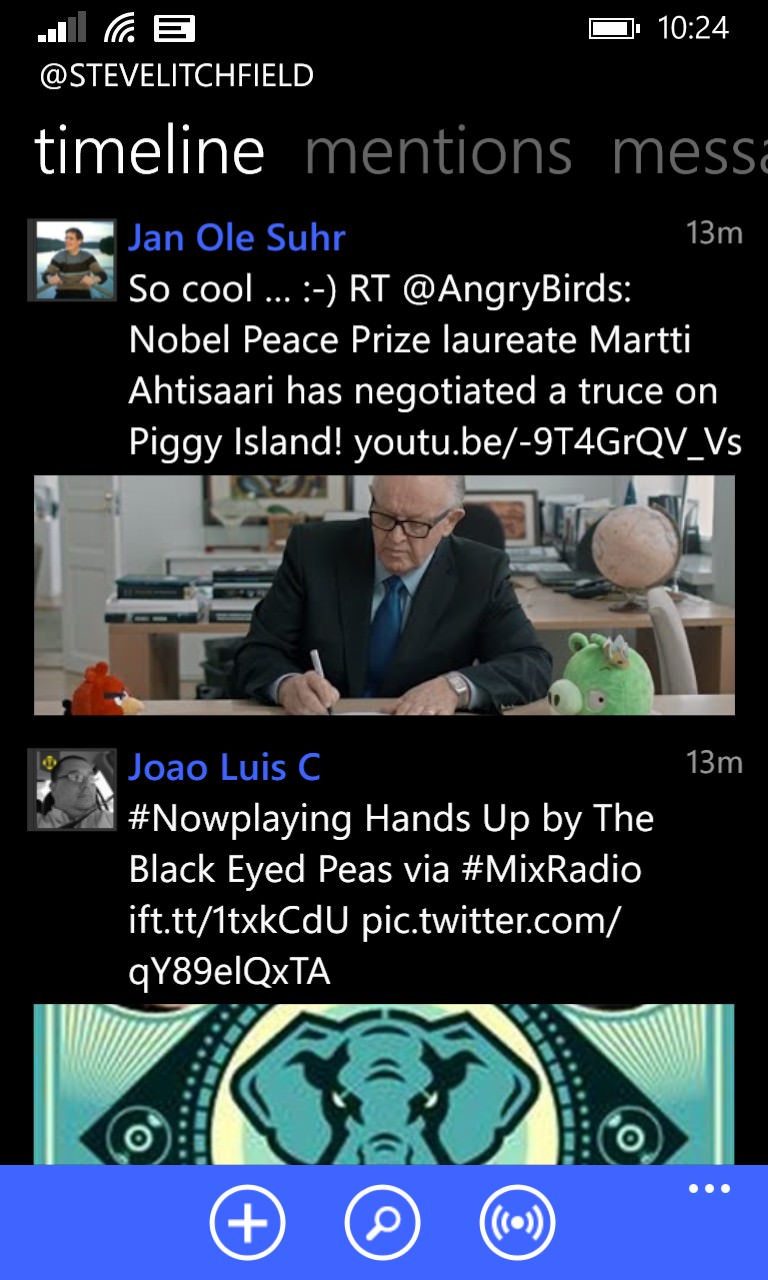 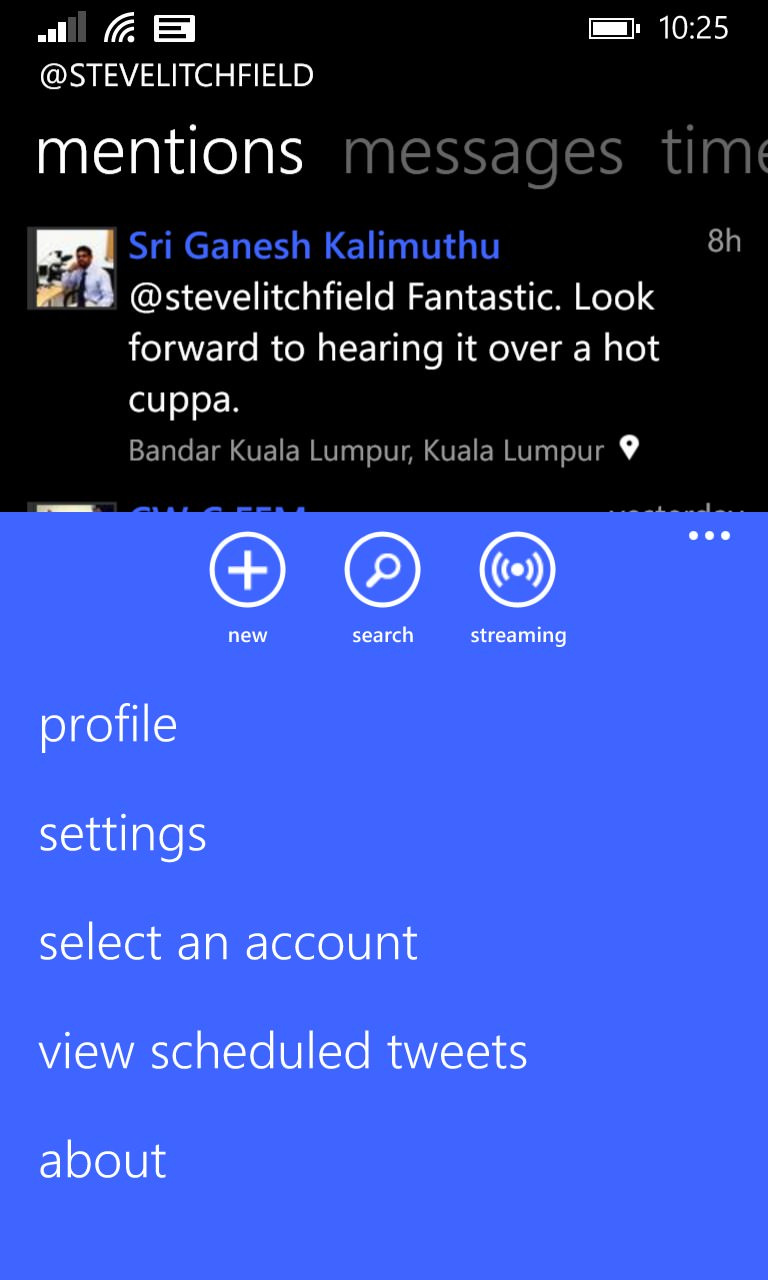 The commercial MeTweets fits in (slightly) more content per screen, plus it uses full width images to good effect; (right) streaming is up front and centre, if you want to go down this route, plus scheduling tweets is most definitely for power users! 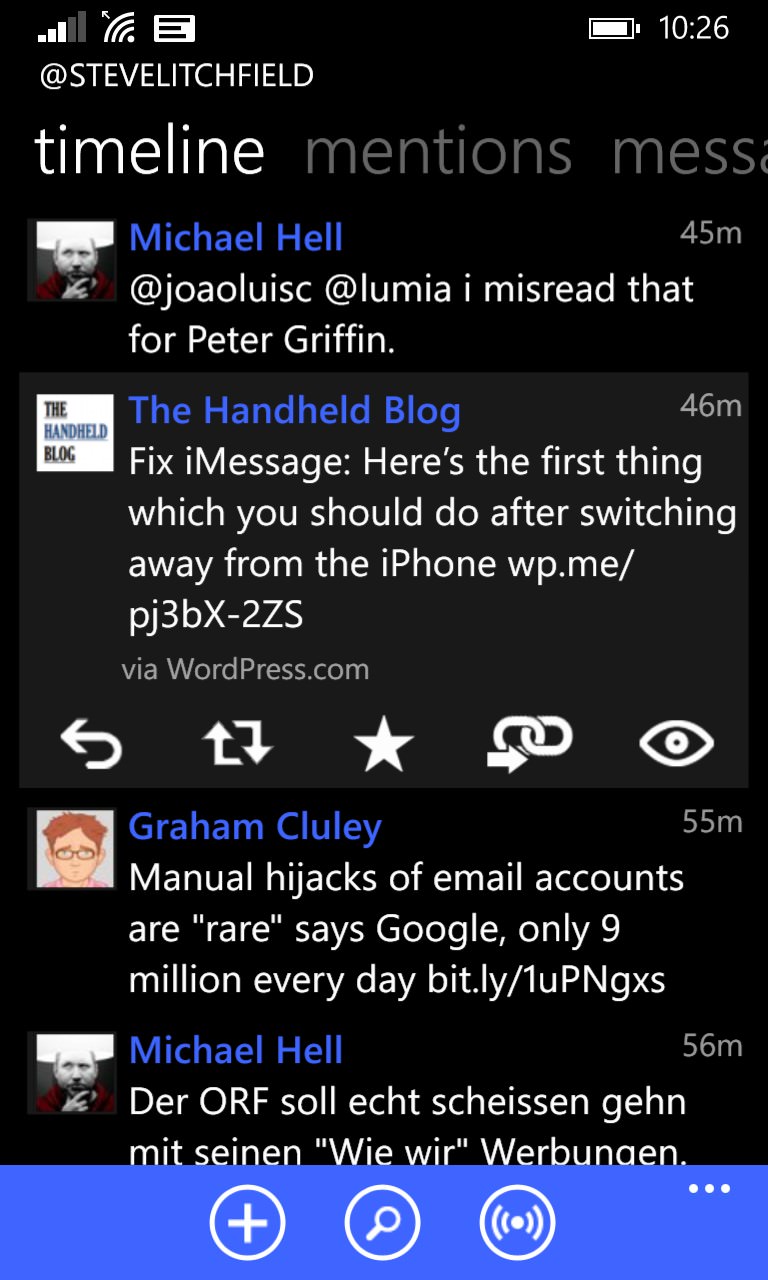 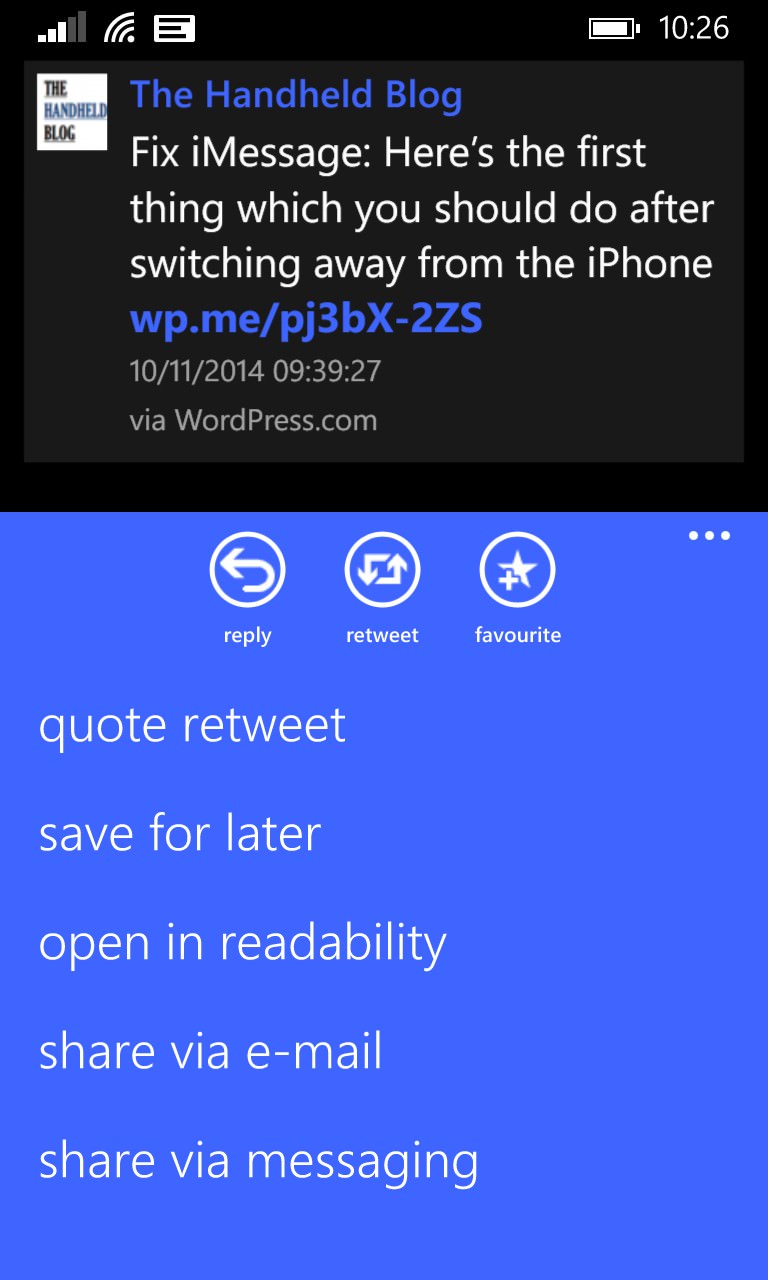 MeTweets offers fast actions when you tap a tweet - or (right) you can double tap to bring the tweet up on its own and then go from there, including opening any links in Readability. 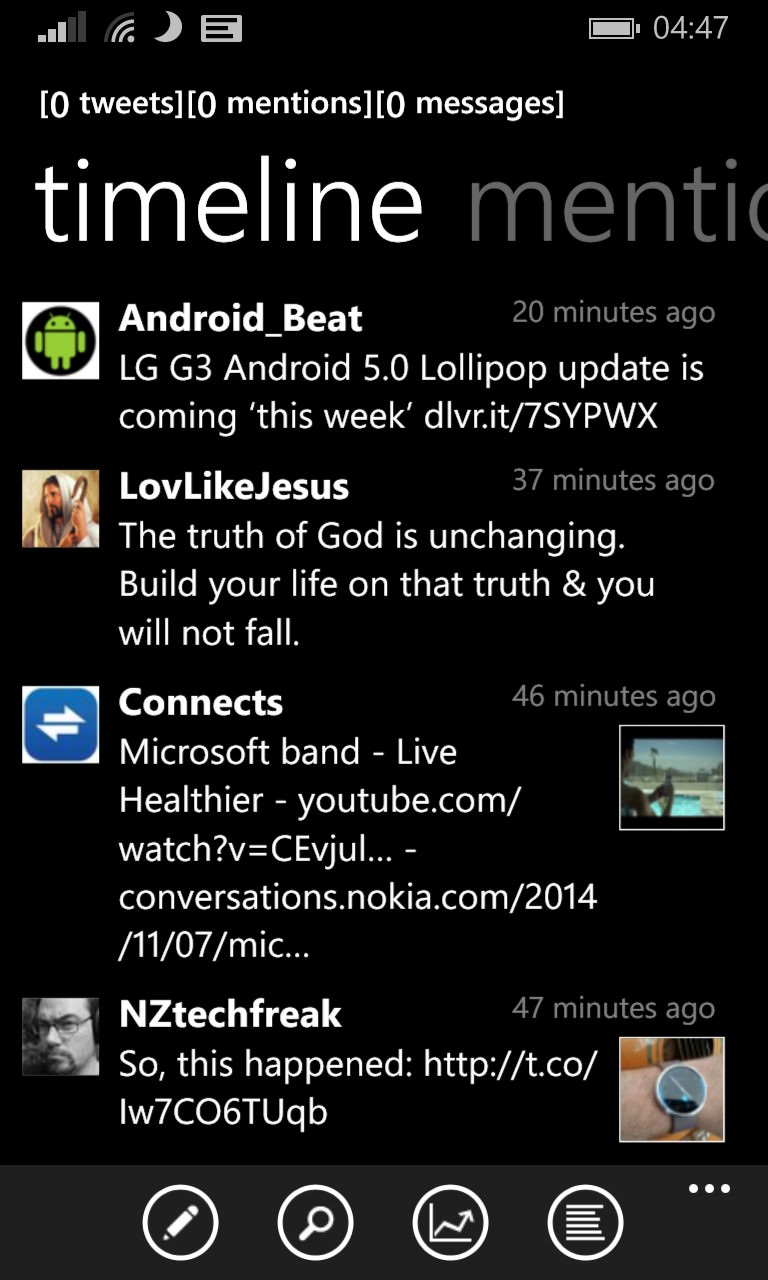 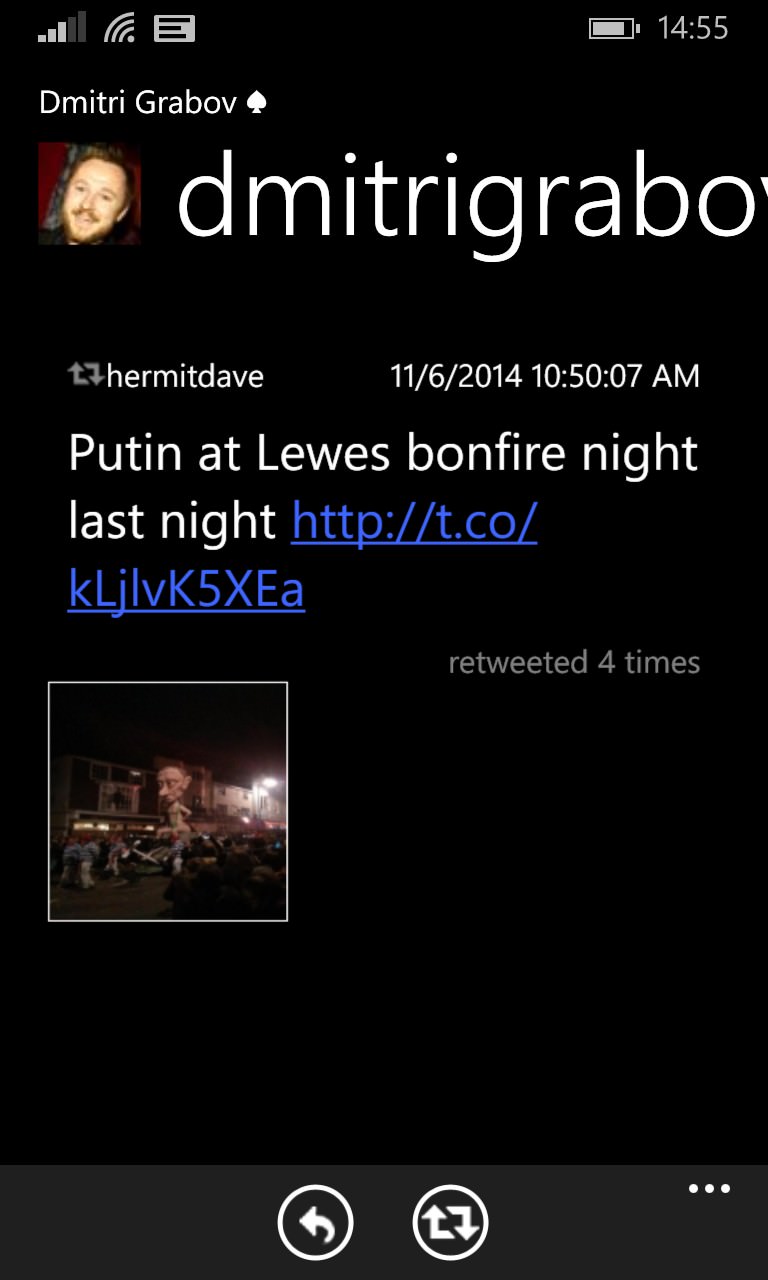 Peregrine's main timeline view, with images shown as thumbnails and even not full width after tapping on a tweet - this is to save bandwidth, it seems. Peregrine does seem very frugal at every stage. You can, of course, tap again on an image to get the full picture. 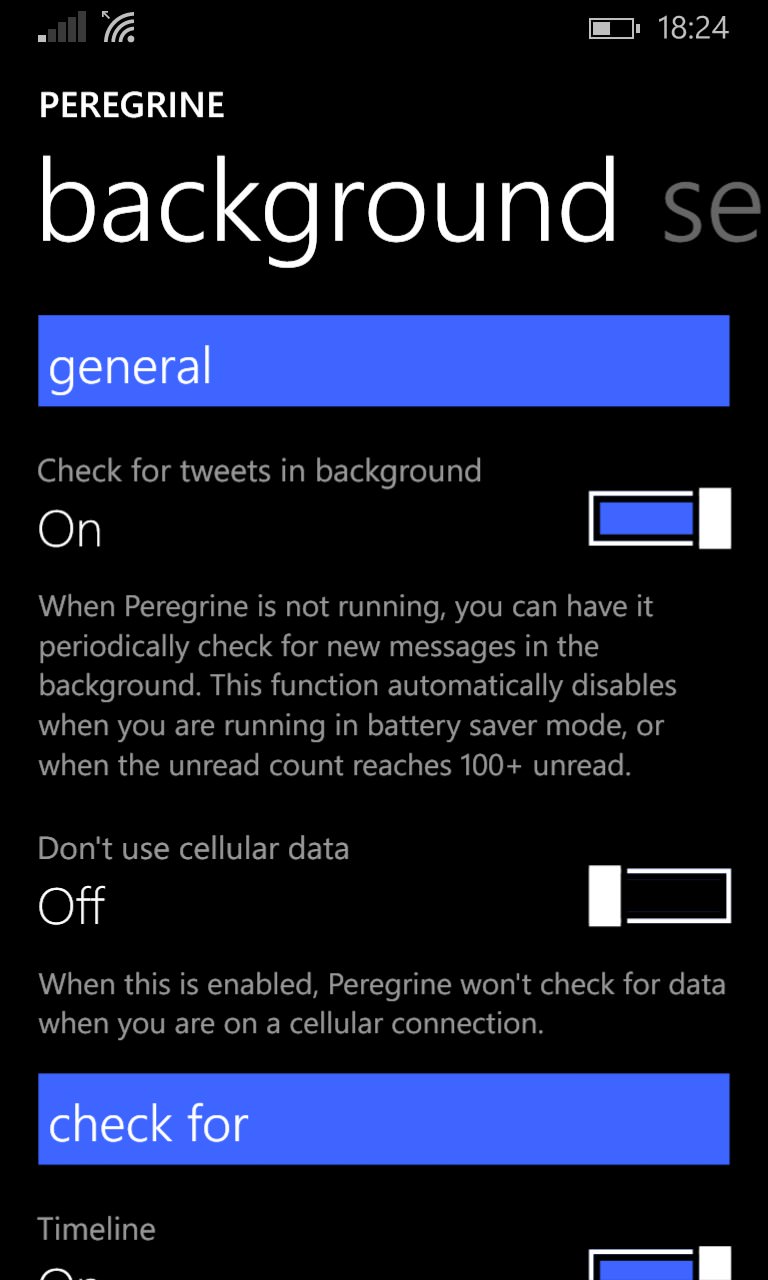 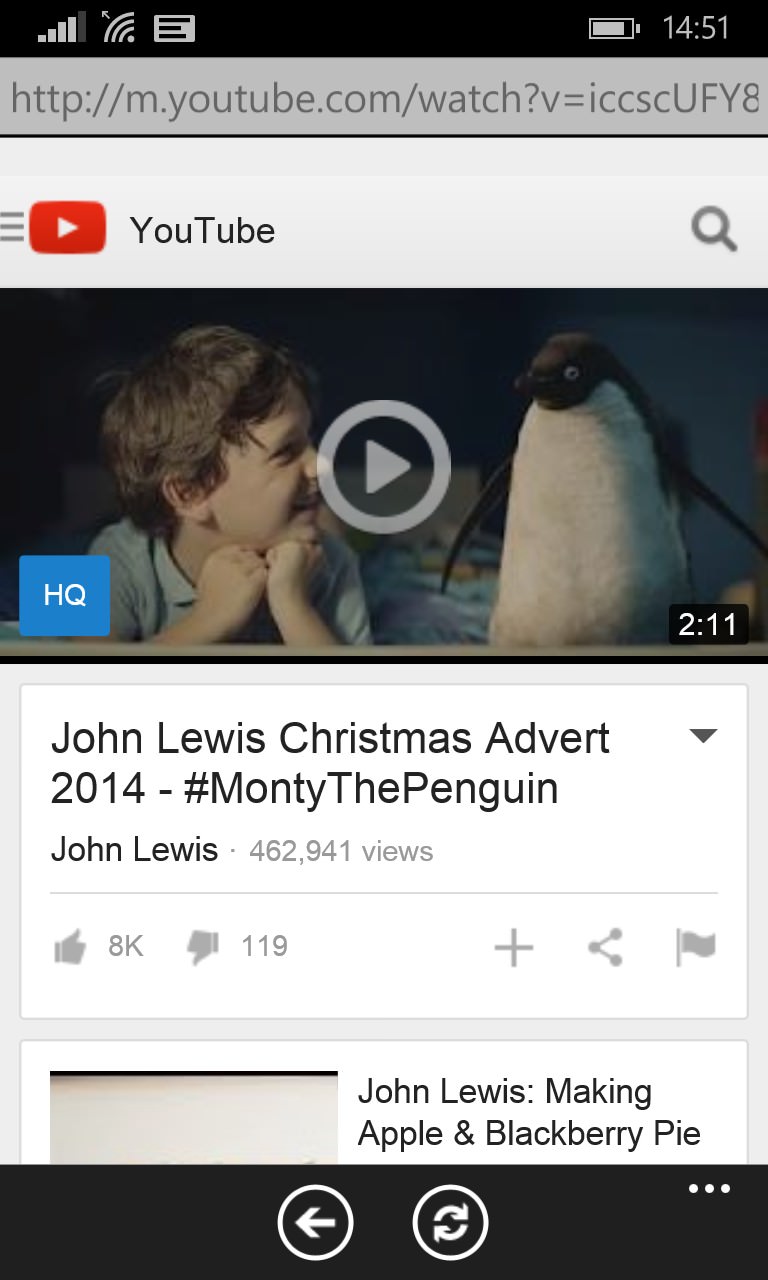 Where Peregrine scores well - a background agent that's a) well thought out and b) fully working(!); (right) link web pages are brought up in the internal browser... 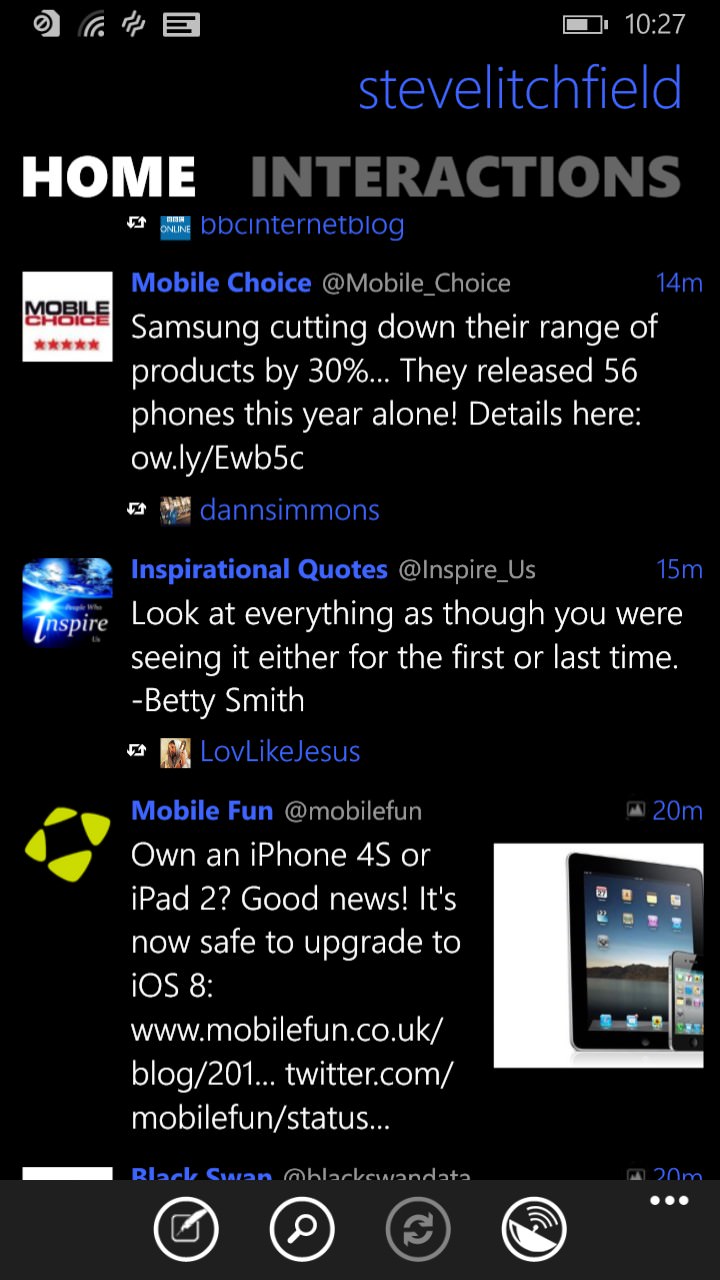 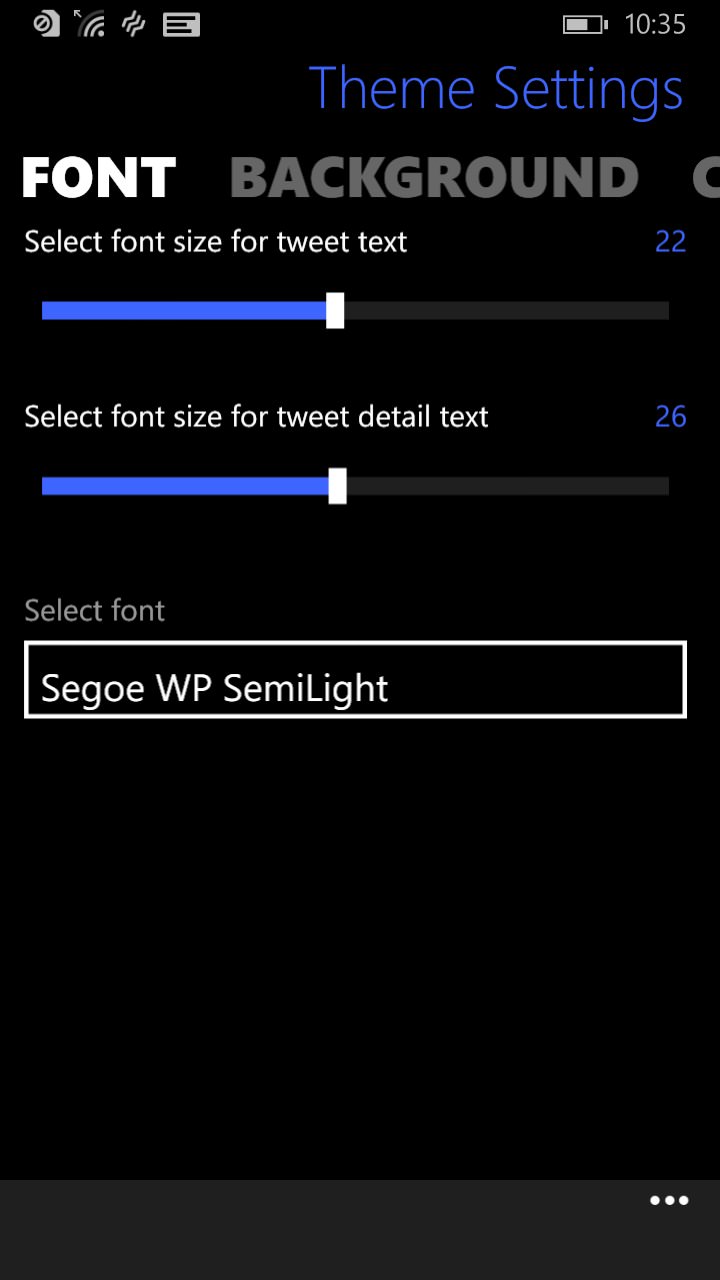 Twabbit in one of the saner text/font/colour combinations. Note that images are shown as partial thumbnails until you click through; (right) complete control over fonts makes Twabbit the most customisable client here. 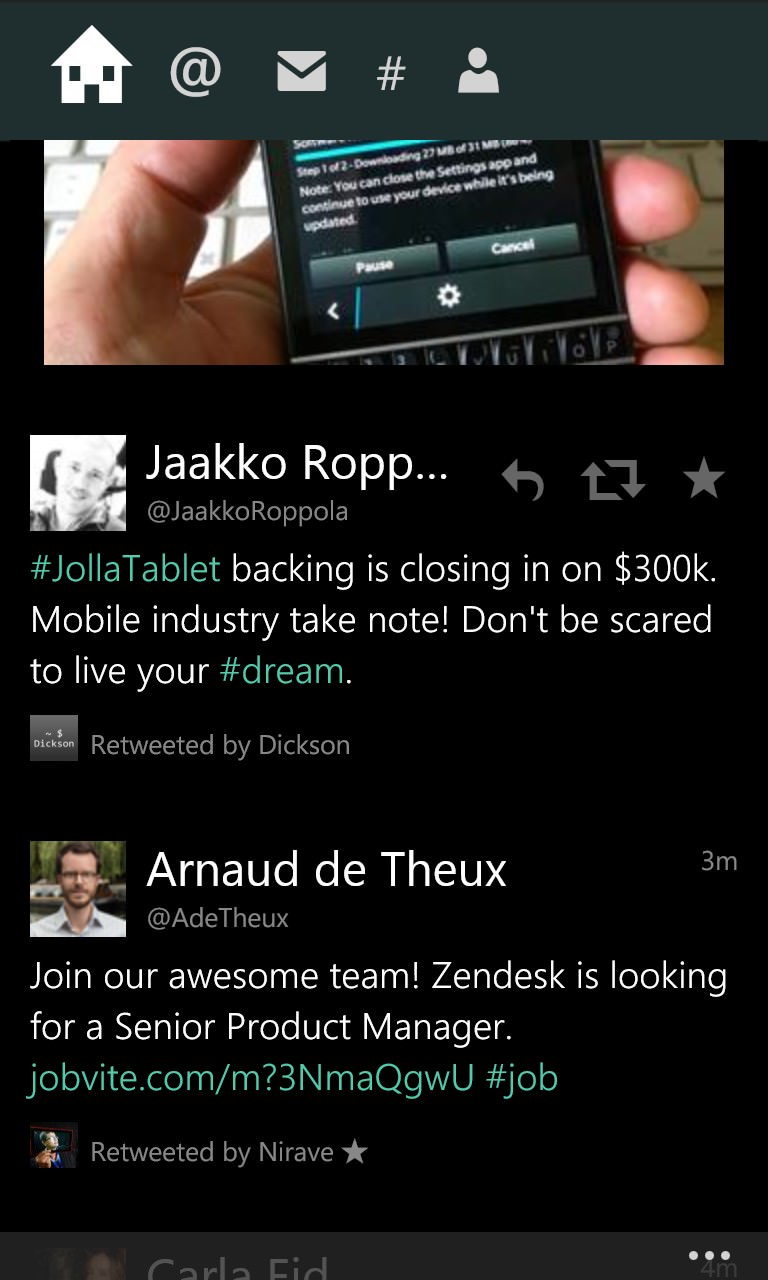 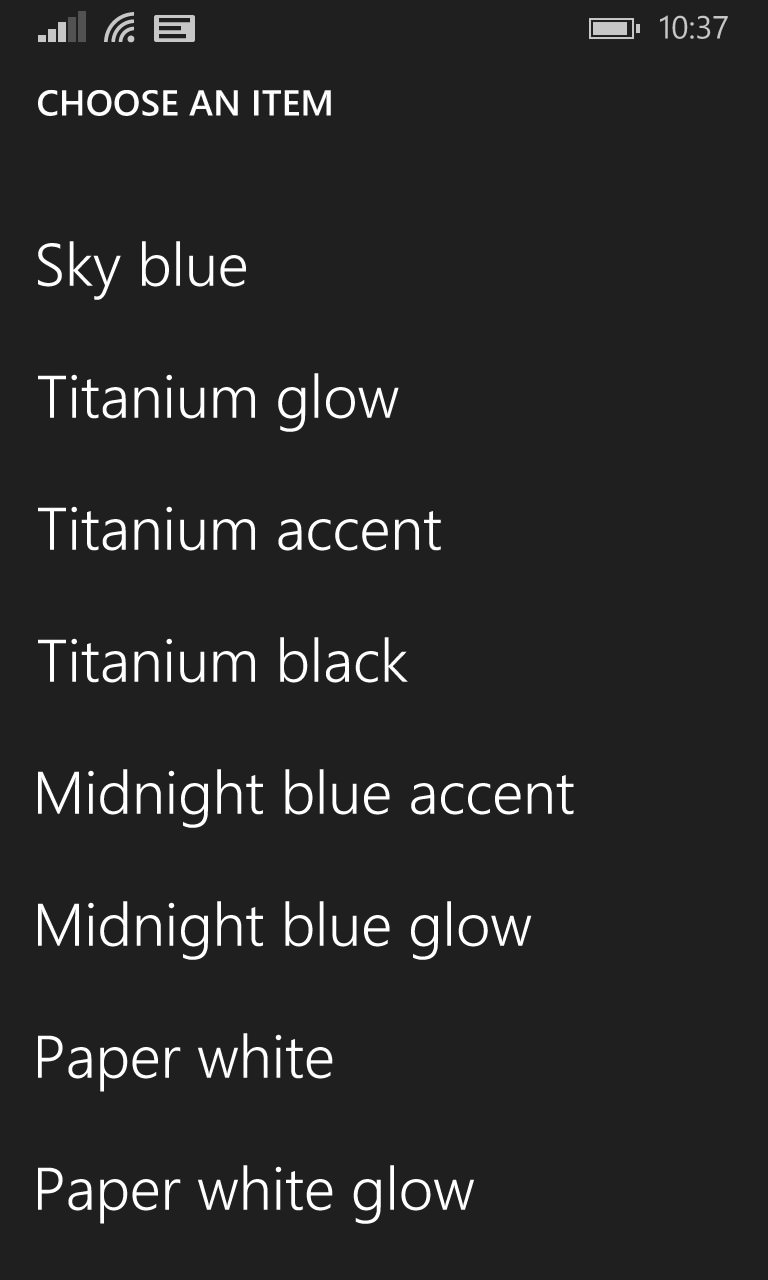 Tweetium with Windows Phone status bar suppressed and toolbar minimised. Also note the full width inline images and clean design generally; (right) some of the many themes, all rather beautiful and well designed - experimenting definitely encouraged! 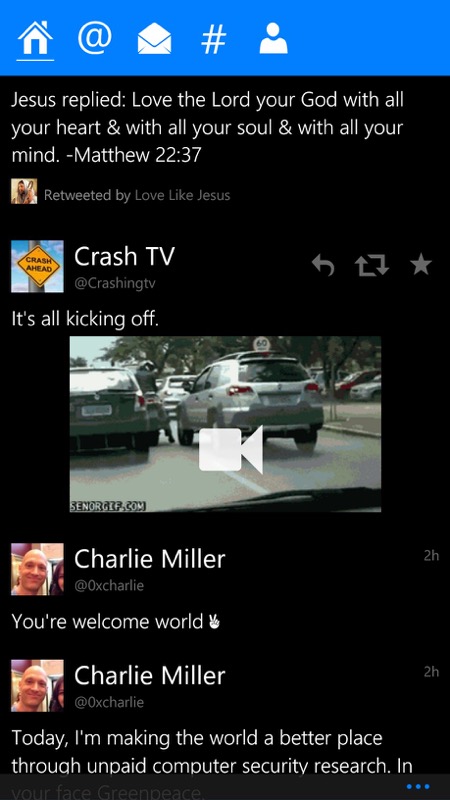 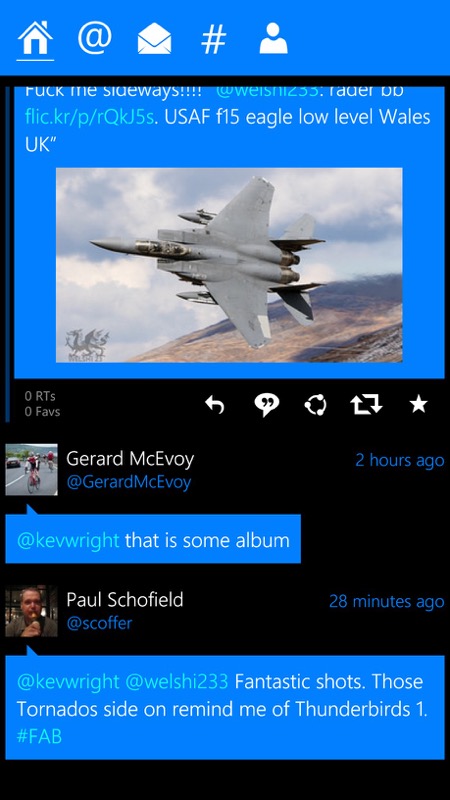 A tweet with embedded video, which plays perfectly within Tweetium; (right) tapping through into a tweet and its conversation view - tapping the image brings it up full-screen etc, for zooming, as you'd expect. 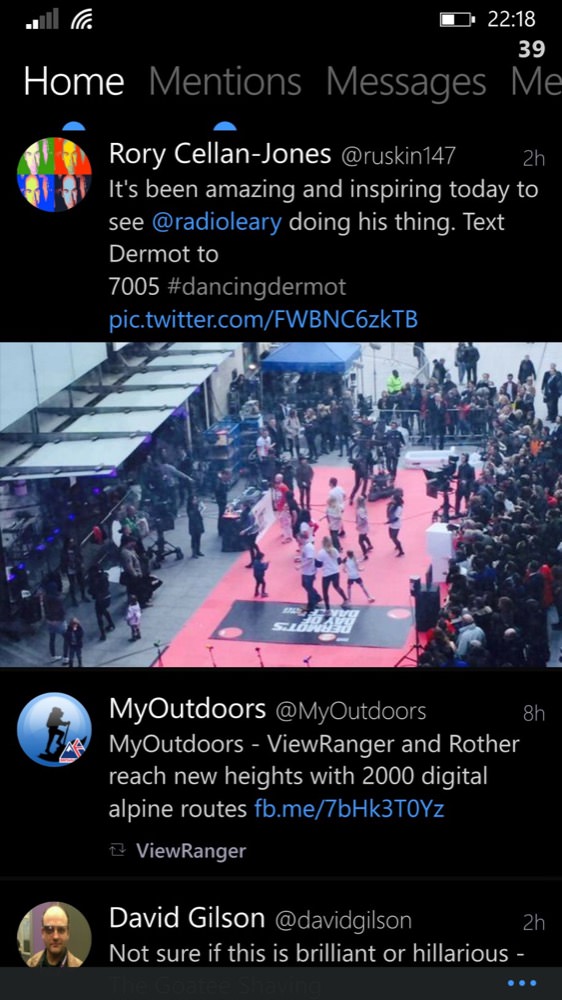 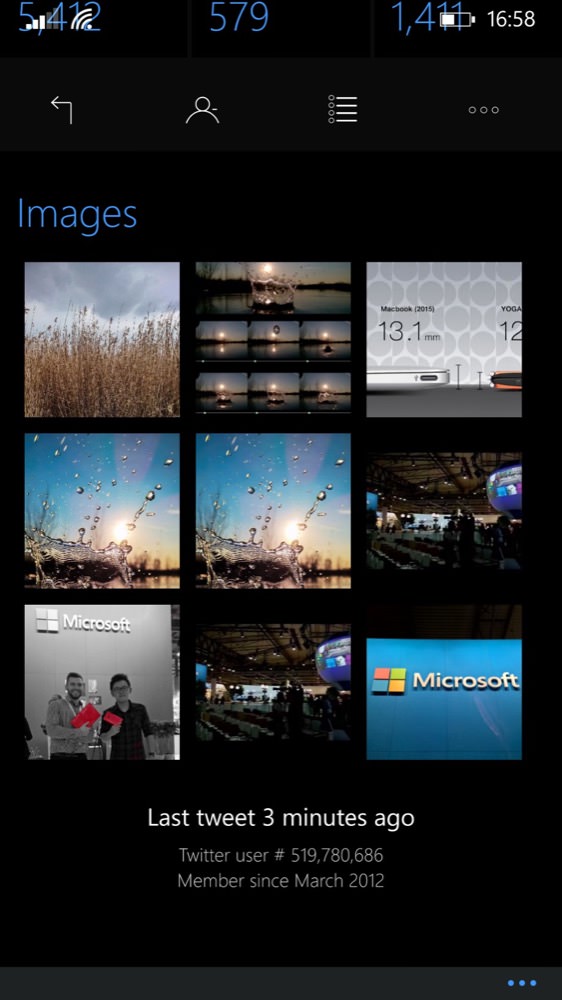 Aeries in action, with a clean interface and a specialism in handling images from Twitter sources. 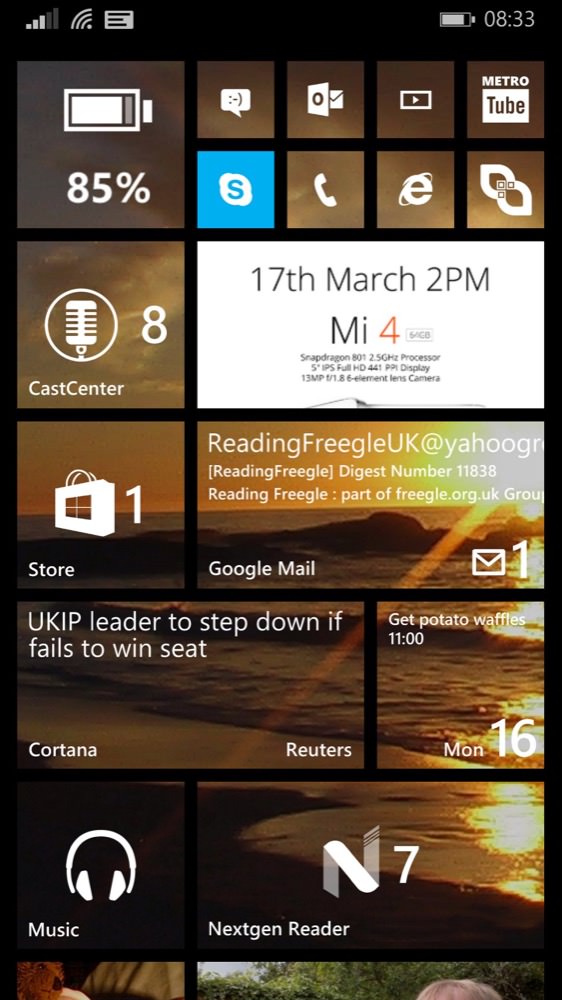 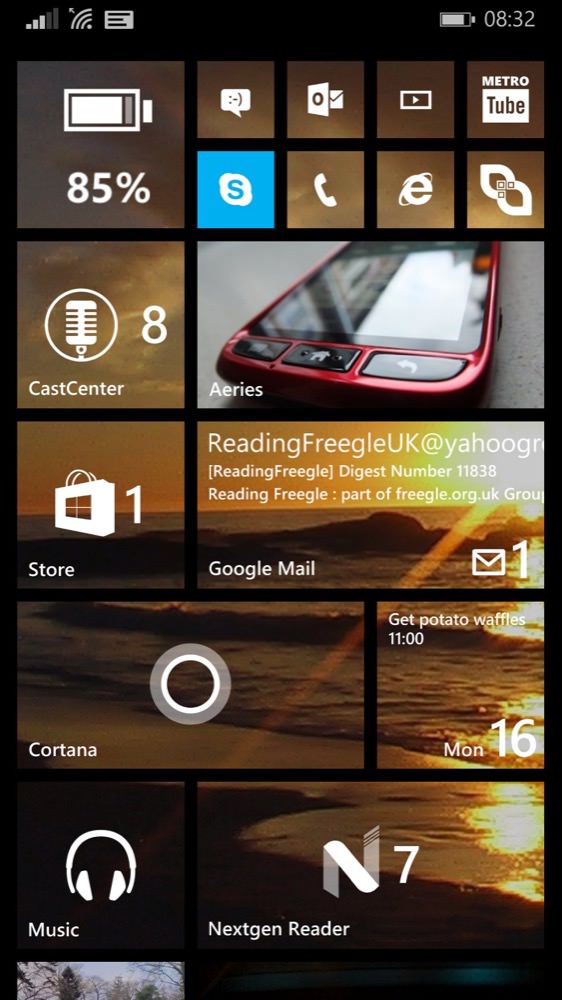 Two examples of Aeries pushing graphical content through to the live tile - recent images are cycled through, and up to date to within 15 minutes of 'now' even if the application hasn't been in the foreground recently.

Filed: Home > Features > Twitter clients on Windows Phone for the end of March 2015