In my hopefully common-sense-strewn advice about keeping some older Lumias (mainly the 1020 and any phone with only 512MB RAM) on Windows Phone 8.1, I have to emphasise that there are huge advantages in upgrading your Lumia, whether officially or unofficially, via the Insider programme. True, your smartphone will be slightly slower overall - but the advantages outweigh the caveats, I'm convinced. Not least because your phone will be able to run UWPs (Universal Windows Programs) properly, i.e. it'll be part of the full, 300 million-strong Windows 10 ecosystem.

Back in January I posted 15 reasons why Windows 10 Mobile is the future for anyone remotely interested in phones tying into the Microsoft ecosystem. To save you looking the article up, here's a heavily condensed summary, indented by me here for clarity:

With imaging being at the heart of many Lumia smartphones, it was important to sort out the mess that was the imaging workflow under Windows Phone 8.1. Rather than a brace of camera applications, we now have just one*, now 98% complete, plus we have a unified Windows 10 Photos system, available on all Windows 10 installations, whatever the platform. So, with a little bandwidth use here and there, you can snap a photo on any device and, more or less instantaneously, see it, edit and share it from any other device on which you're signed in.

2. Better use of screen real estate

With Windows 10 Mobile, there's almost always more content on-screen, and there are finer fonts to help with this, which work especially well on the 1080p (and above) screens.

I'm confused why many die-hards are bemoaning the loss of 'HERE Maps' (etc.) on Windows 10 Mobile, since a) Much of the core functionality in Windows 10 Maps was based on HERE Maps, adding new functions such as live traffic and cameras, integrated transit data, and so on; b) the map data for most countries is still the same HERE dataset, that company remains by far the dominant map provider; c) HERE, now no longer owned by Nokia, lost interest in programming for Windows Phone and Windows 10 Mobile a long time ago - at least Microsoft seems keen to keep the application bang up to date.

One of the seven wonders of the tech world is that the full Office application - and I mean the full app (at least in the 'modern UI' variant) has been shoehorned into Windows 10 Mobile. Just about everything that you might do on, for example, a Surface device, can also be accomplished for free on a Windows 10 Mobile upgraded device.

Admittedly this came in for Windows Phone 8.1 Update 2, but the implementation was flawed and in any case only a tiny fraction of phones got this update. Bluetooth keyboards work really well with Windows 10 Mobile.

Yes, Edge is still a silly name, but hey, it kept the 'e' logo for new users, avoiding confusion. I think they should have called it Internet Explorer 12, or similar, personally. It's far more compatible with the HTML5/Javascript sites of 2016 though. Edge also has a rather splendid 'reading' mode, with control on the main URL bar - just tap this and all ads and sidebars are long gone.

Nestled in the bottom left of the Windows 10 Mobile keyboard is a control completely inspired by the IBM 'Pointing Stick' on the classic ThinkPad laptops. Nudge/drag it right and the cursor is nudged right by one position, ditto for any other direction, or drag and hold and the cursor starts shuffling along.

The backup system under Windows Phone 8.1 was a little hit and miss, but did work acceptably when pushed. For Windows 10 Mobile, the rough edges have been polished off and you also get better transparency as to when a backup happens and how large it is (on Microsoft's servers).

Almost every application in Windows 10 Mobile works just as well in landscape mode as in portrait, thanks to the way Windows 10's interface is designed to work on tablets and laptops too. Working this way often gives a better view of whatever you're doing, especially if you're using (e.g.) a Bluetooth keyboard too.

Now with a dark theme (on my AMOLED-screened devices), I'm growing to appreciate the full functionality of Outlook's two big modules.

Action Center got bumped up on steroids for Windows 10 Mobile, with an extra swipe down popping up sixteen toggles and shortcuts, somewhat reminiscent of that in stock Android - importantly, this includes an integrated flashlight (using the LEDs on the back), shortcuts to OneNote and Camera, and toggles for mobile data and mobile hotspot. You can configure the 'bottom four items too, the ones that appear in the Action Center 'overview'.

Talking of Settings, it's finally sorted properly in Windows 10 Mobile, hierarchically arranged and much faster to use.

Something of a gimmick on sub-5"-screened phones, but more useful on phablets like the Lumia 950 XL and on an upgraded Lumia 1520 and 1320, a long press on the Start control slides down the display so that you can interact quickly, one-handed, with the top half of the touchscreen.

One fundamental aspect of Windows 10 is that the text elements of the user interface can be adjusted to suit the user's eyes. And this works on every device. Now, the Microsoft defaults are set sensibly on a device by device basis, but it's fun to fiddle. Admittedly you have to restart the phone to see the effect of any changes, but at least it's all possible.

Only 14? Where's number 15? In fact, this is turning out to be one of the biggest benefits of all - the support for UWPs (Universal Windows Programs). With applications now forming the core of how we interact with our smartphones, there's the choice of being left locked into the app ecosystem as it was under Windows Phone 8.1, effectively stagnating after about 2014, or leaping ahead to a brand new world of UWP compatibility.

Dropbox this week was a great example of this - Windows Phone 8.1 devices are left on version 2.something of the client and a long way behind in functionality. other examples include This is Money, BT Sport, WinZip, TeamViewer and a bang up to date official Twitter client.

Originally, the term 'Universal' was applied to apps that were built for both Windows Phone (8.1) and Windows 8.1. They could be created with a lot of shared code (or none) but they were two separate apps that were linked in the store. While the 'U' in 'UWP' does indeed stand for 'Universal', they are very different concepts:

A 'UWP' is a single app that can run, unchanged, on different families of Windows 10 devices (e.g. phone and desktop).

Some of the internals of UWP apps depend on functionality in the core of Windows 10 and so can't run on earlier operating systems. At all. In contrast, an app built for 8.1 can run on Windows 10 as the latter has special provision for this, i.e. it's backwards compatible.

(Technically, it should be possible for Microsoft to be able to create a platform that allows apps to run on older and newer versions of Operating Systems but doing so would take more time and effort, which in turn would mean that we would get updates and new features less frequently. So that's never going to happen.) 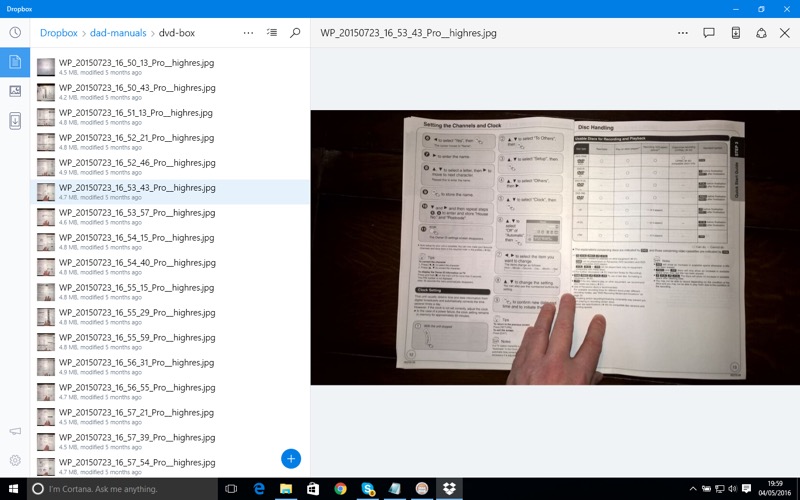 As an example of how UWPs (Universal Windows Programs) work, here's the Dropbox UWP in action on my Windows 10 desktop PC... 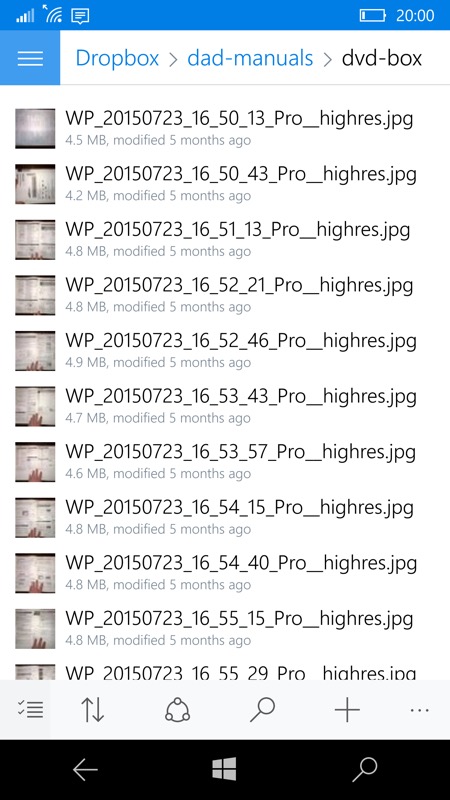 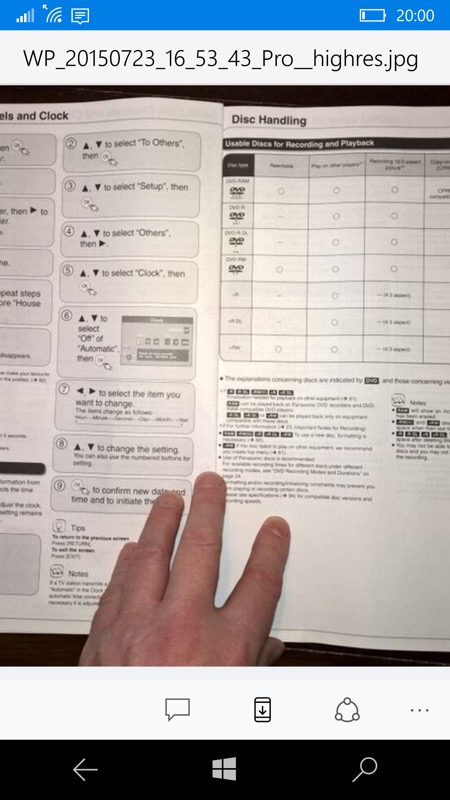 And here I am in the same online location in the same UWP on my Lumia 950. The layout part of the UI is smart enough to know that it can't show the preview on the same screen, so it switches to show this after a tap etc.

* I tried the phone in landscape mode but the behaviour was the same - I suspect I'd have had to change the 'Size' accessibility setting as well in order to change things in this regard - and then the content would have been too small to see properly. Best leave everything on the Microsoft defaults, is my advice!

As you'll see by the brief list of applications above (all grabbed from the last few weeks of news on AAWP), there's a growing momentum behind UWPs, spurred on by the continued adoption of Windows 10 on the desktop/laptop, with three months still to go before the 'upgrade for free' offer for general users expires (and I'll bet that it gets extended indefinitely) and by nearly all new PCs coming with Windows 10 now. So getting on for 300 million users in the ecosystem and growing fast.

And it's a true ecosystem, at least in theory. Although not every UWP is actually provisioned for both desktop and mobile (i.e. checked for layout, issues fixed, and then put in the Store), an awful lot are - I mean, that's the point in UWPs after all - that one binary can work across all form factors.

So, if your Windows Phone 8.1 device (1020 and anything with 512MB RAM or less, excepted) is needing all the benefits above and you like the idea of being part of a whole new world of Universal Windows Programmes and generally being a heck of a lot more up to date then I'd urge you to either:

Yes, your phone will get slower overall (I estimate by around 50% across the board), but the other benefits are huge, and will extend the life of your old phone by six months or a year.

PS. Thanks to Matt Lacey for his contribution in this feature...