Here's the latest in my growing series of cameraphone 'tutorials', or at least explaining the thought behind various successful phone-shot photos. In this case, a look at the use of positioning, light and PureView zoom to capture amazing detail in a pretty water fountain.

My series 'Anatomy of a Lumia photo' (here's #1) has proved popular, even though I cheated with the HP Elite x3 instead for #2. #3 had a lovely clock, #4 was all about framing, in #5, I got down and dirty with nature, in #6 I had a rosy dilemma to solve, and in #7 I took a satisfying low light snap in appalling weather. In #8, I got extremely close to an impressive moth, in #9 Andrew Elliott was in Budapest at night, in #10, I was shooting in early morning sun, and in #11, I shot 'wide', with a little help from Panorama mode. 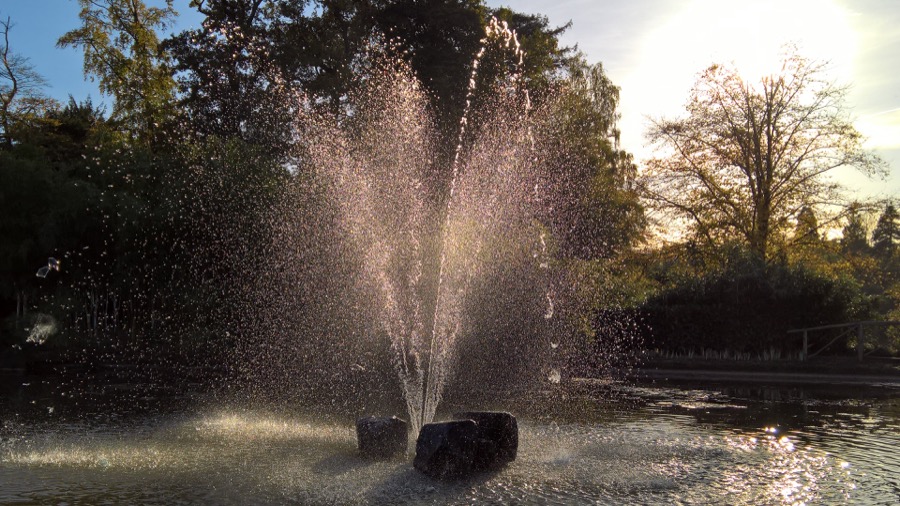 Now, at web resolutions here on AAWP, the fountain kind of looks like... a fountain. But the full 8MP photo contains amazing detail, thanks to 'frozen' water droplets from the fast (1/6000s) shutter speed that the Lumia 950 XL selected automatically. Here's a sample from the middle: 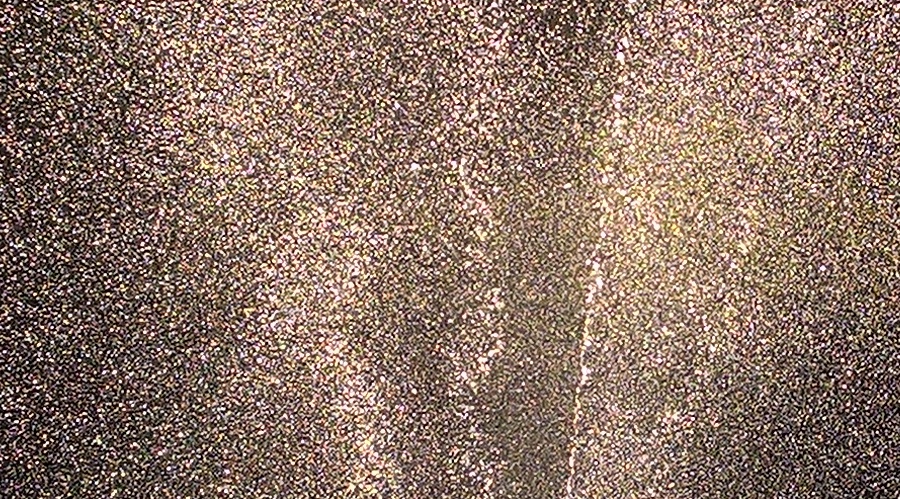 Kind of abstract, but mesmerisingly so, for example with the full photo on a large PC monitor. Well, I like it anyway, amazed by how much the water droplets are discrete and with the sunlight turning each into a point of light in the frame.

I'll return to the full photo later, along with a download, but as ever, here are my thought processes. We were at Cliveden National Trust on an afternoon out. Perhaps the last really sunny day of the year in the UK, and the sun was low in the sky with an hour to go until sunset, so I was determined to get some good snaps on my Lumia.

There are plenty of picturesque spots at Cliveden, of course, but the water garden is my favourite. And, while I got some great photos of the main pool there, I was attracted to the energy and spray from this particular fountain. I spied it first through the bushes: 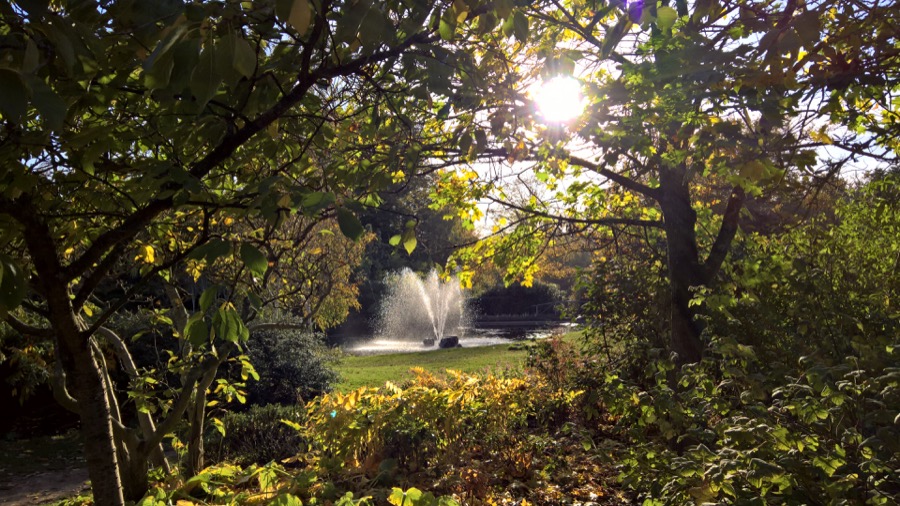 The framing was so lush, shooting into the late afternoon sun, that I thought I'd try a little PureView zoom too. I keep my 950 XL in 8MP mode - the 16MP mode is wasted for almost all occasions, while 8MP gives me plenty of resolution, oversampling purity, and some native zoom if needed. As here. 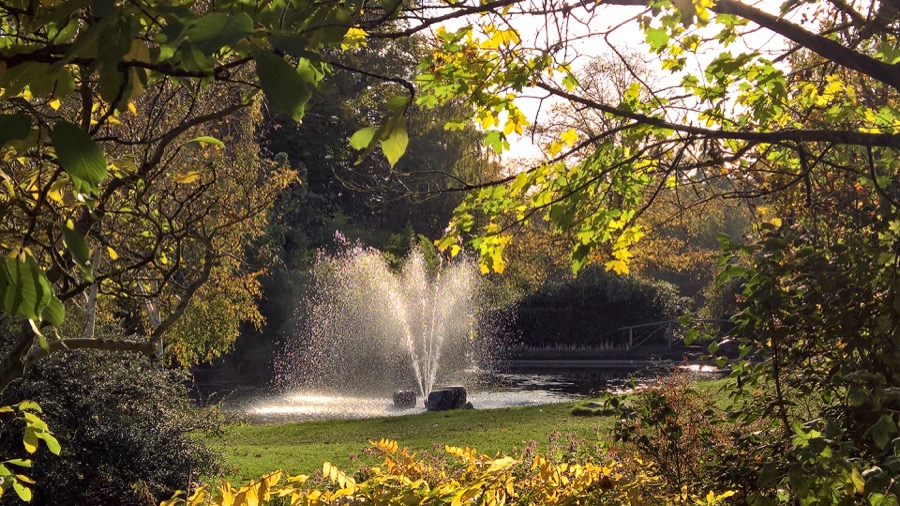 Quite a nice, arty snap, but I wanted to capture more of an impression of the power of the fountain. So I walked further round to one of the accessible edges of the pond: 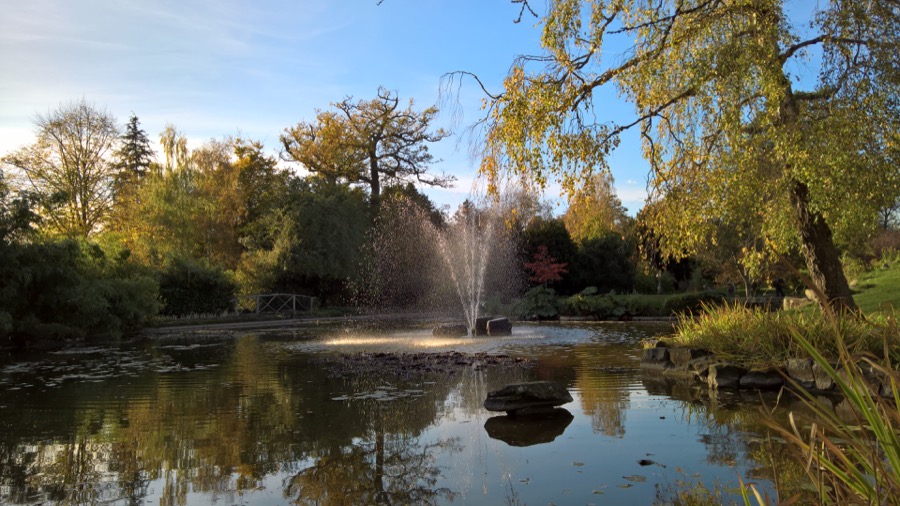 While there was some nice mirroring in the water and while the fountain, and you can see where this is going, I wanted to get closer and I wanted to capture the effect of sunlight in the water spray. So I moved around and found a spot on the grass opposite the sun: 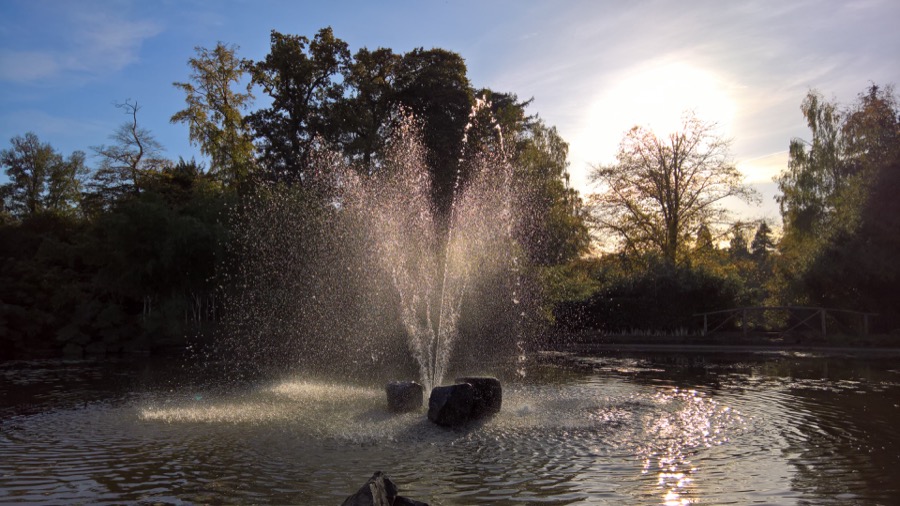 Now we're getting there. Although a photo can't quite capture the breathtaking sunlight through a powerful fountain, I wasn't far off. I tried moving a few feet to my left so that I was shooting straight into the sun and also applied around 1.5x zoom (the 950's PureView limit) to get even closer, optically (i.e. without wading into the lake!): 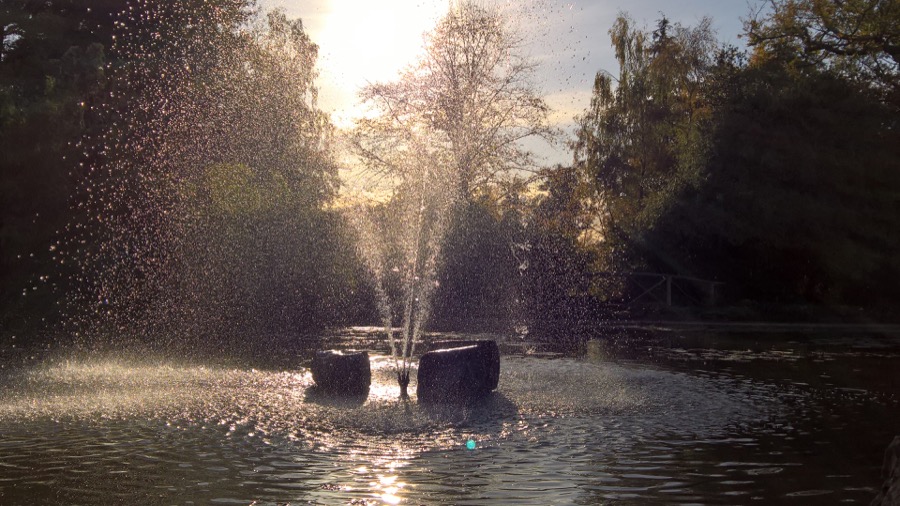 However, shooting into the sun over-exposed much of the spray and I lost detail. What I wanted was the sun in the spray and not directly through it. So it was back to my right but keeping the PureView zoom in place. And voila, my final snap:

Having the dark trees behind the fountain helped bring out the water drops, while the sun is in shot but also not obscuring any important detail. Perfect. You can download the full 8MP photo here. It's over 5MB because of all the fine detail that the JPG needed encoding!

Comments welcome, as usual. Any good water photos you care to share?