Windows Phone is still a small player compared to iOS and Android (18.4%, 69.6% and 6.7% in the EU5 respectively), with the growth largely coming at the expense of BlackBerry and Symbian. Across a number of markets, Windows Phone can be considered to be firmly in third place and is showing strong positive growth.

The full Kantar Worldpanel data for April 2012/2013 is available here.

The numbers for the UK are particularly impressive, with Windows Phone's market share having more than doubled over the last twelve months. This is, in part, due to introduction of lower cost devices (e.g. Lumia 620, which went on sale in mid February, near the beginning of the reporting period). The next few months should see further growth as additional lower cost Windows Phone devices (Lumia 520 and 720) and new high-end device (Lumia 925) come on stream.

Windows Phone's market share in Italy has been eroded over the first part of 2013, with strong competition coming from lower cost Android devices from LG and Sony. However, this trend appears to be slowing, and is likely to be changed by the launch of Nokia's lower cost Lumia devices (high market share in Italy 2012 was driven by sales of the Lumia 610).

Windows Phone's share of the US market is lower than in Europe, but has increased for the first four months of 2013, growing from 3.2% to 5.6% on the back of strong sales of the Lumia 822 on Verizon. The introduction of the Nokia Lumia 521, Lumia 925 and Lumia 928 (beginning of May, June, and end of May respectively) should help Windows Phone's position in the months ahead.

As we have previously commented and as can be seen in the chart below, which shows Kantar Worldpanel market share figures for Windows Phone from the last fourteen months, there is significant variation from month to month, even with the smoothing effect of a three month moving average. This is because, within a given market, sales volumes of mobile phones are volatile, subject to peaks and troughs in response to handset launches, promotional activity, and price changes. For example, the UK market has benefited from relatively heavy promotion of the Nokia Lumia 620 in March and April. 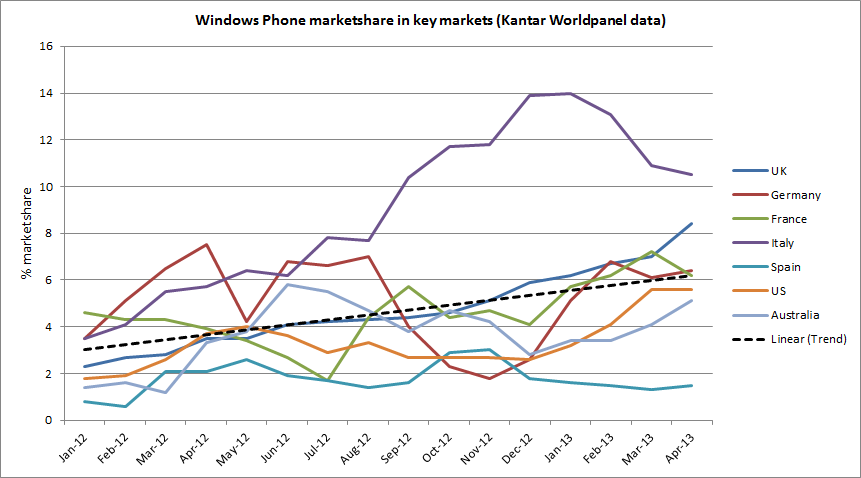 In its press release Kantar notes that Windows Phone is showing continued growth:

Android and iOS continue to take the lion’s share of smartphone sales in Britain. However, Windows phones are becoming increasingly popular with consumers. Windows has grown its share by 4.4 percentage points compared with the same period last year and now holds an 8.4% share of the market.

As we have previously commented, in the context of the overall smartphone market, Windows Phone remains a relatively small player, eclipsed by both Android and iOS, as the charts below show. The strength of Windows Phone varies from market to market. The UK is an example of a market where the release of Windows Phone 8 devices appears to have had a positive impact. By comparison, market share is lower in the US, but that may reflect device availability on different carriers (e.g. Lumia 928 only just becoming available on Verizon, nothing (yet) on Sprint), and the low end Nokia Lumia 521 has only been introduced relatively recently (i.e. no impact on these numbers).

Windows Phone continues to be the fastest growing platform, but that's a rather meaningless statistic given the small base from which the comparison is being made. Some markets, such as Italy and the UK, show particular strength, with Windows Phone now in a position where it is possible to see future growth, resulting in a market share nearer the level of iOS (16.6% in Italy, 26.8% in the UK), something that would have been almost unthinkable 12 months ago. Having established itself in third position, becoming a challenger for the second spot (at least in some markets), must surely be Windows Phone's target over the next 18 months.