Next version of Windows Phone to add new enterprise features

In a blink and you'll miss it moment during Microsoft's pre-MWC press conference Joel Belfiore made a brief mention of a number of enterprise features, including VPN and extended MDM support, that will be added to the next version of Windows Phone. The update, which will be delivered in the spring, will be available on a range of new devices and as an update for all existing Windows Phone 8 devices.

The enterprise feature mentioned at today's press conference include:

The features described today had already been mentioned last year as coming to Windows Phone in a forthcoming "enterprise pack", but Belfiore clarified that they would be part of a wider update that will be "delivered this spring". This is a clear reference to the Windows Phone 8.1 update. The announcement also confirmed, for the first time at a Microsoft run event, that all existing Windows Phone 8 devices will receive an update to the next major version of the platform.

Speaking of our enterprise customers, we are also hard at work on delivering a compelling new update for Windows Phone that will add key features for consumers, as well as a big investment in enterprise customer capabilities, including VPN, S/MIME support, enterprise Wi-Fi, extended mobile device management and certificate management. Along with a host of great developer and consumer value, we expect to deliver this to customers this spring with new phones following as we move into summer.

Microsoft also made it clear that the forthcoming update will support a wider range of hardware and that it is working with a number of new hardware partners. In terms of consumer experience the only major new feature that was announced today was support for dual-SIM devices (i.e. send and receive calls and messages on more than one SIM in the same phone), though the addition of various cellular standards (TD-SCDMA, TD-LTE, and SGLTE) are also significant as they will expand the geographic and operator footprint of the platform.

Dual-SIM functionality is popular in markets where pricing and tariff models mean that the cost of national / mobile to mobile calls and messages can vary significantly between providers. A consumer looking to maximise value may therefore use multiple providers (SIMs) in order to use whichever one provides the cheapest calling or messaging rates. However, it can also be useful in the enterprise context in cases where an individual wants to combine a work and personal SIM into a single device.

A screenshot of a dual SIM implementation on a Windows Phone device was shown at the press conference. Each SIM had its own Live Tile for calling and messaging, though accompanying text noted that the messaging Live Tiles could be linked together. A signal strength indicator fr each SIM is shown in the status area at the top of the screen. Thought not noted as such, this was, as far as we are aware, the first time a Windows Phone 8.1 screenshots has been officially shown in public. 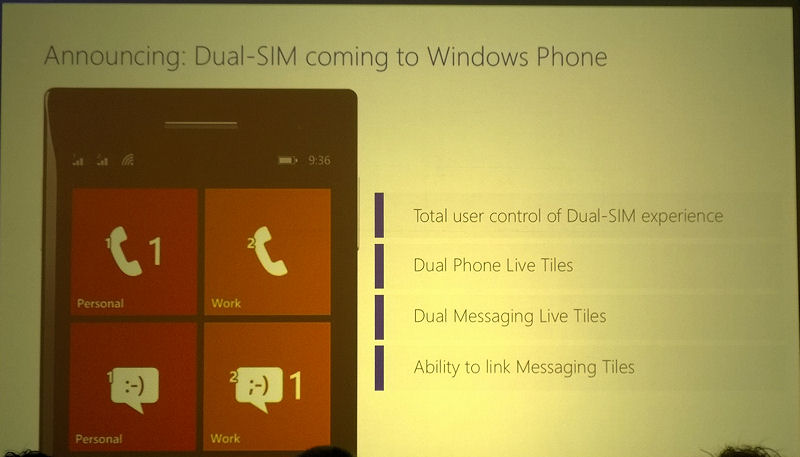