Potentially confusingly arriving as Windows v10.0.12648.133, what's rolling out to Windows Insiders today is 'Build 10149', bringing its own swathe of improvements across the board. I declared that build 10136 was close to being useable day to day and build 10149 marks that point for real. As of today, I'm going to be living with Windows 10 Mobile 24 hours a day - I'll report back, of course. See below for the main improvements over build 10136.

There's been no timescale announced for the phone SKU of Windows 10 as yet, but it can't be more than a couple of months behind, otherwise the raft of 'one platform, one store' marketing that's been accompanying the Windows 10 ramp-up won't make sense to the consumer. Anyway, build 10149 is available right now, if you've joined the programme and are happy to take on the usual risks.

It's worth noting that any Windows Insider can update to this new build, unlike the shenanigans we all had to go through in order to get Build 10136. Just head into 'Settings/Update & Security/Phone update' and you should see the new build ready for you. If you don't, check that your Windows Insider application is still present and set up to 'Fast ring'.

Although I didn't see it for 10136 either, Microsoft does highlight:

The post-upgrade migration status screen is still missing after upgrading to this build which normally shows you the progress of the post-upgrade migration. After upgrading, the Lock screen will appear frozen without the date and time for up to 10 minutes. Please be patient and let it sit – eventually the date and time will appear and it will allow you to unlock your phone. If you get impatient and restart or mess with locking/unlocking your phone, you’ll wind up in a funky state – so just relax and let it do its thing.

Also from the Microsoft blog post announcing the update:

Here are some known issues:

Gabe Aul at Microsoft finishes with:

We’ve been using this build internally for a few days and have really loved it. It is faster, more stable, and more polished overall and has been lots of fun for us to see come together. For me personally, I’ve been thrilled to see a bunch of changes get completed that you’ve been asking for. It reminds me why I’m so excited about the Windows Insider program and being able to hear your input to help us shape the product.

As someone who has put in suggestions of my own, I'm thrilled with how all this is panning out too. There's a real sense of community in helping shape Windows 10 Mobile. Hopefully you're excited by the process too. And now, for the first time, I'd venture to suggest that you might like to swap your main SIM into a device with this build and give it a go, 24 hours a day. It's demonstrably still a 'beta', but it's a useable beta.

I'd still highlight that battery life may still be something to be aware of. During this phase of the development of any OS, minimising power drain isn't always the highest priority (major bugs and feature insertions are still top of the heap). So don't expect the battery life of your device to match that under Windows Phone 8.1 yet. Take an emergency charger with you if you head out, etc. - just in case!

Would I still advocate a 'reset your phone' and 'set up as new phone' after installing the new build? Yes, definitely. It's worth the hassle of time and reinstalling applications - you'll end up with something more streamlined and free of anything hanging around from 10136. People who have updated in place have seen some glitches already, so I'm playing safe - especially because I want to write about what's in 10149, not ghosts hanging around from previous builds!

Note also that, after updating, allow an extra hour or so (yes, really) for all the applications in the 'Store (beta)' to download and update. These include any that are tied to your device/variant in Microsoft's provisioning database, so a Nokia Lumia will pick up some legacy 'Nokia' utilities, for example. In my case, heading into the Store (beta), there were over 40 applications downloading (or queued to download) and installing. This took ages to process (mainly due to the speed of/load on Microsoft's Store server, it seems, so time for another cup of tea. Or beer. Or something stronger! 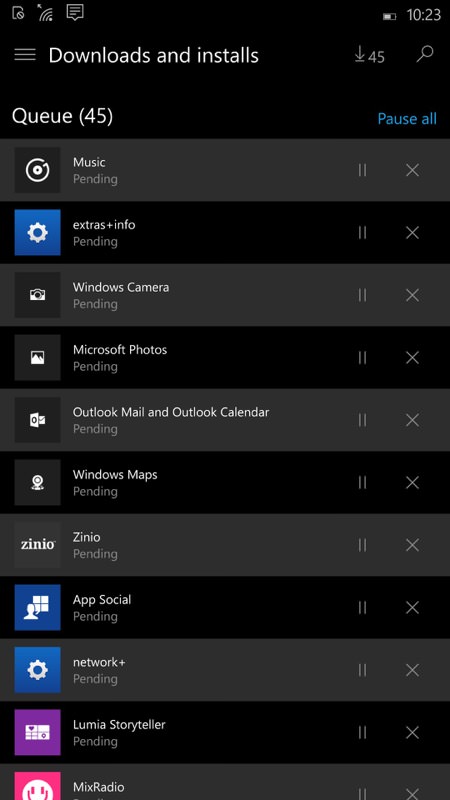 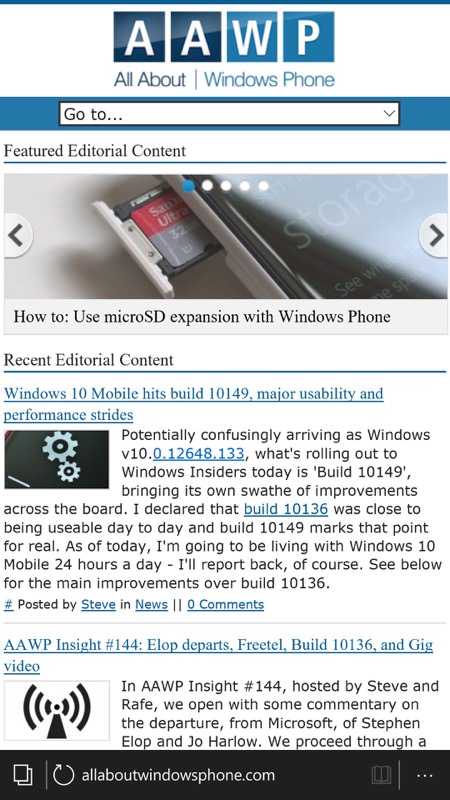 Even after a factory reset after the 10149 update, there are a further 40-odd applications to install and update - patience is definitely needed! (right) the 'Microsoft Edge' browser in action, with bottom-of-screen URL bar - hooray! 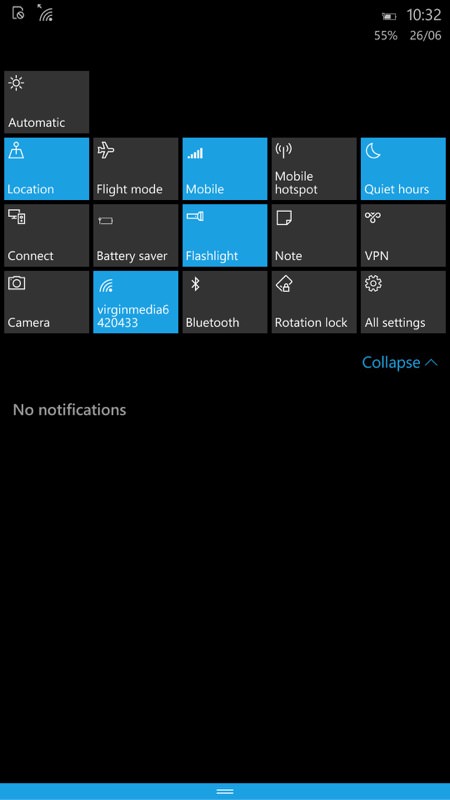 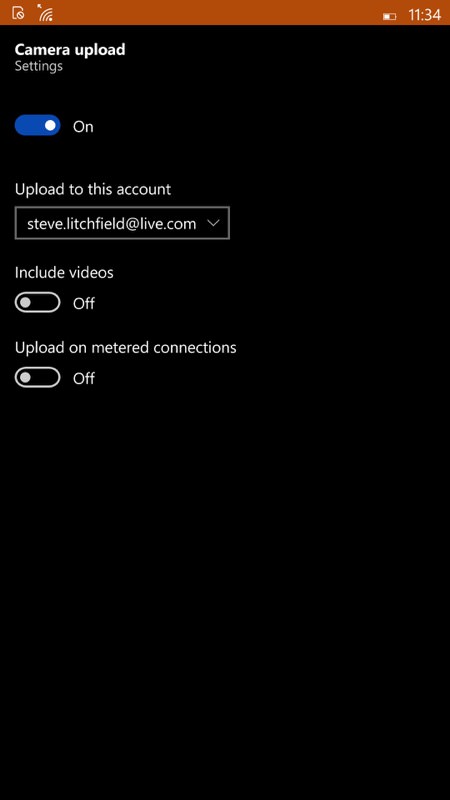 Action Center can now be expanded to four lines with a second downward swipe - though only just over three are needed on this large-screened Lumia 1520! Note the new Flashlight and mobile data toggles.... As ever, you can customise which toggles appear by default in your 'home row' in Action Center; (right) Camera roll auto-upload is back! With the option to not include videos too, which may be helpful for many people - it's annoying having your phone burn through 30% battery auto-uploading videos that you wanted to go through and edit anyway. 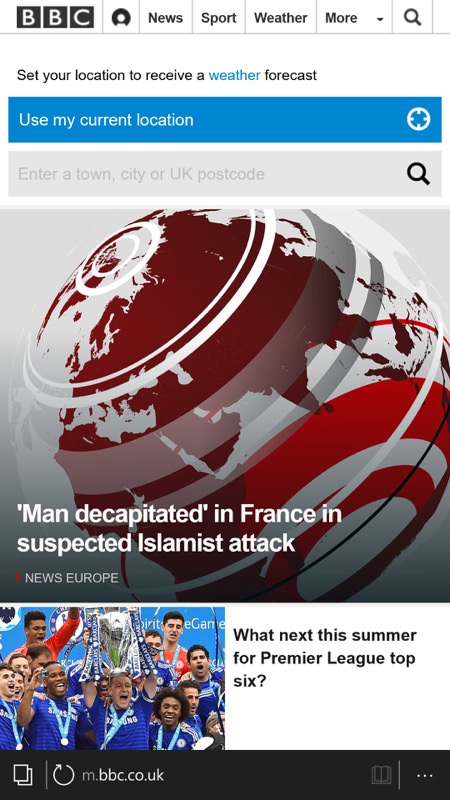 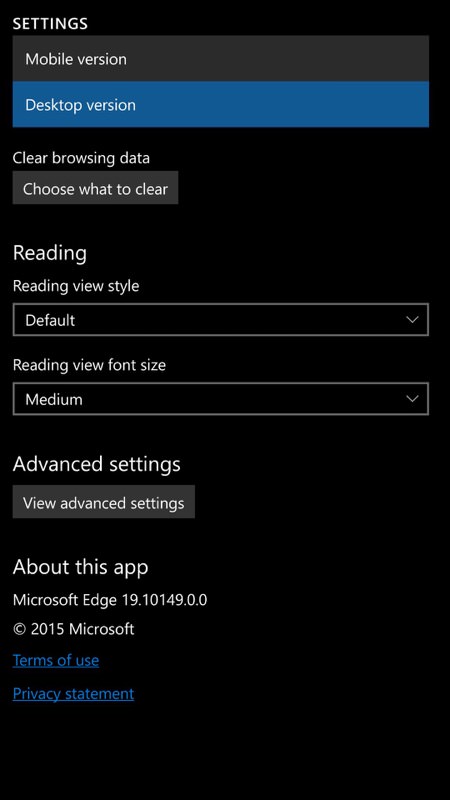 Microsoft Edge now includes a 'Desktop version' option, though in my experience, for the vast majority of web sites you can rely on their server-side intelligence to serve up an appropriate mobile and/or responsive version of the content... 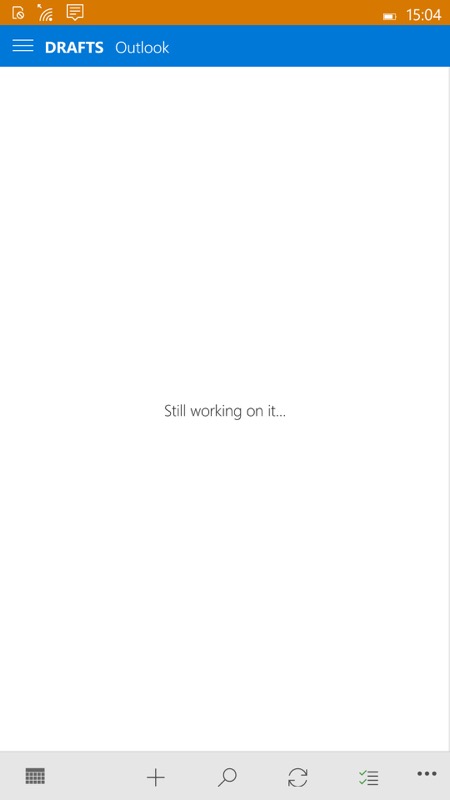 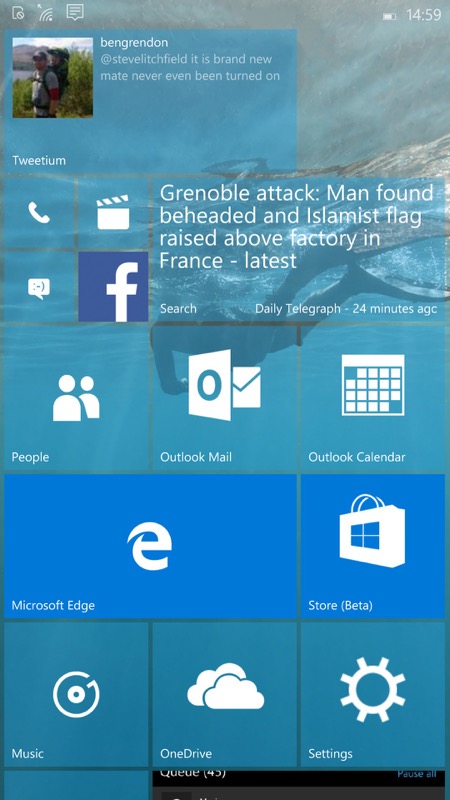 Other issues I've come up against today: this build doesn't seem to want to help Microsoft Health sync with the Microsoft Band - I've tried several times and can't make headway. Also, Music only builds its indexes of your music when in the foreground, i.e. you have to sit with the phone doing nothing else for tens of minutes while it indexes potentially thousands of tracks of music on your SD card - surely this should be a background task??

PS. Note that if there's a catastrophic problem with the new preview, it's possible to get back to the previous Windows Phone 8.1 Update 1 using the (aforementioned) Microsoft recovery tool here.