Something's happened to Edge. No, not the modern Chromium-based Edge that's been in the Windows 10 for the last couple of years (including preview time). I'm talking Edge 'legacy', the browser that shipped with Windows 10 when it first appeared and which Windows 10 Mobile still has to use (sadly). Firstly, it's now officially 'End of Life' and out of support, and secondly, its scripting engine is hitting issues on many popular sites, see below for some examples on my Lumia 950 XL. Missing images, mainly, but these do sometimes impact page navigation.

So yes, from Microsoft today:

Additionally, we announced that the now out-of-support Microsoft Edge Legacy desktop application will be removed and replaced with the new Microsoft Edge when customers apply April’s Windows 10 cumulative monthly security update (or “B” release). For more details and an FAQ, please see our announcement blog post.

Having said that, web browsers are built on standards and they'll always work... to a degree. Edge will let anyone on, for example, a Lumia 950, browse most of the web for many years to come. The basics of http and https, CSS, JPG and PNG imaging, and so on, will mean that most sites can be navigated and enjoyed.

Most. But not all, since things are clearly starting to break. The issue is that the Web has been getting more complex for years. Back in the 1990s I was involved in the creation of a web browser for Psion and helped to detect and render simple HTML tags, including tables. So I know the basics of how web pages used to be created and in fact to this day I still hand craft my pages on stevelitchfield.com in raw HTML. But technology moves on, with CSS and HTML5, both of which Edge 'Legacy' (including under Windows 10 Mobile) handle pretty well.

But the elephant in the room is scripting - javascript mini-applications, effectively, offering interactivity on pages beyond what HTML5 would allow. And the people who code such scripts/apps don't always test them against older or niche browsers. So, in this case, we have mainstream sites using javascript that hasn't been tested against the scripting engine in Edge 'Legacy' and, unsurprisingly, it doesn't always work: 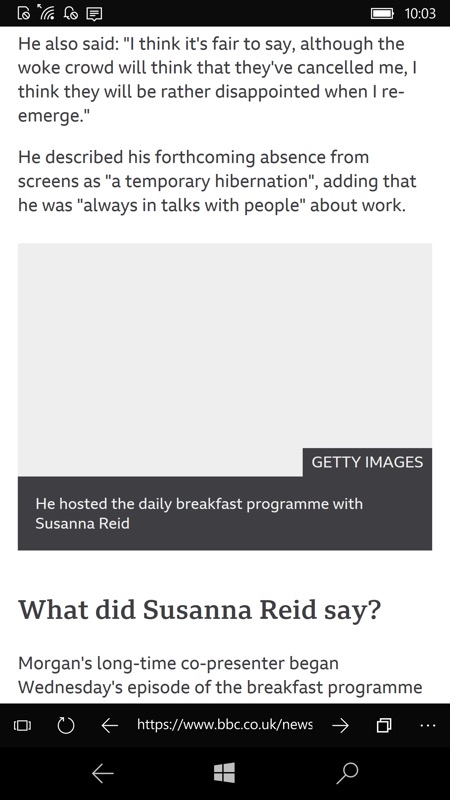 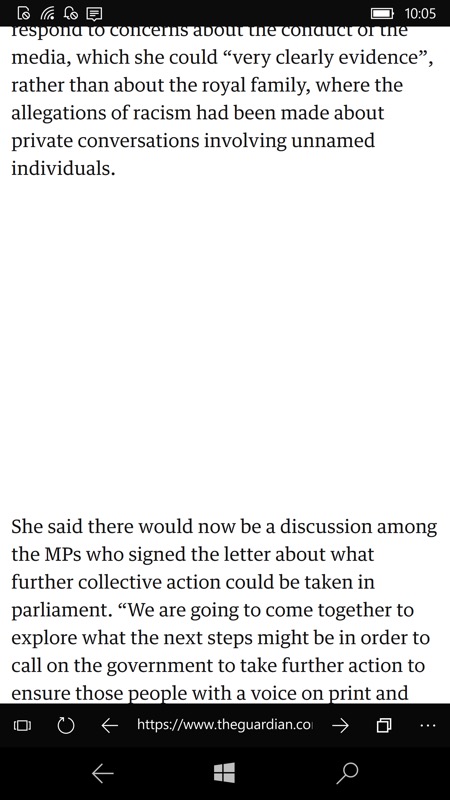 Missing images today on the BBC News site; (right) mind you, the same scripting issies also cause some in-line adverts not to load either! Swings and roundabouts?! 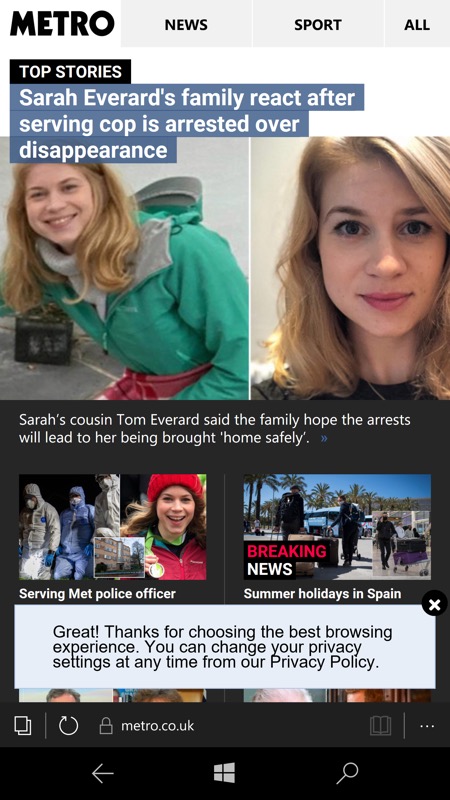 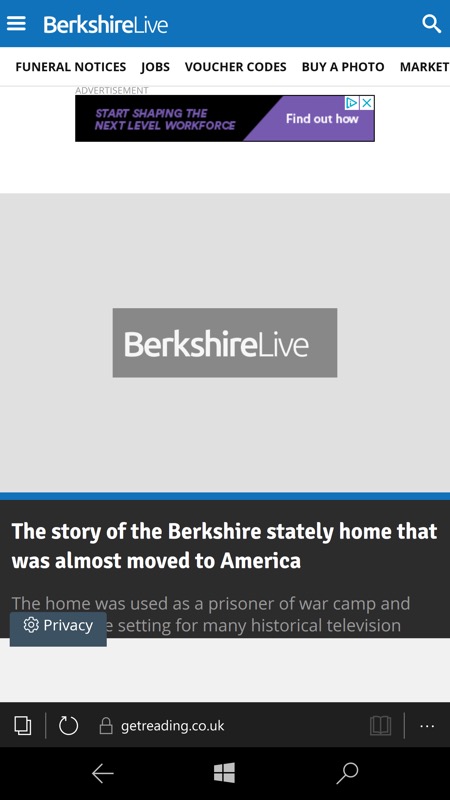 Sites work on the whole though - it completely depends on the javascript libraries/versions used by the relevant web developers; (right) another example of things going wrong on a news site. Mind you, in this case, BerkshireLive is an appalling site for banners, pop-ups, adverts, and so on. Almost unusable on a good day. The same goes for many other ad-supported sites which have gone way over the top in trying to 'monetise'. Best stick to their Twitter feed? 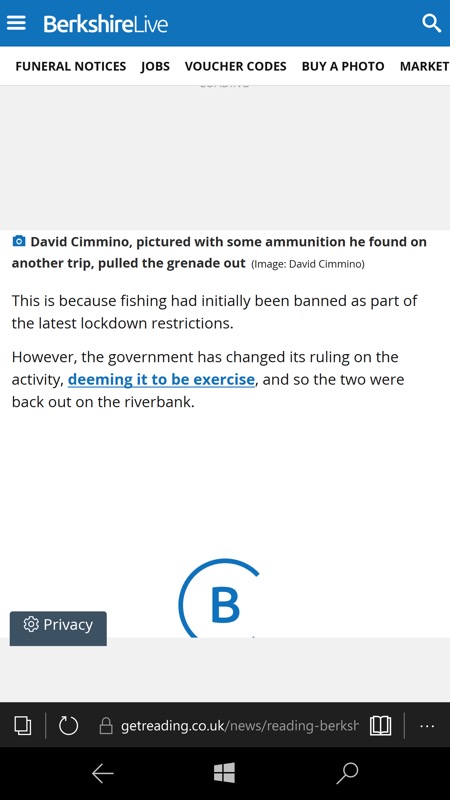 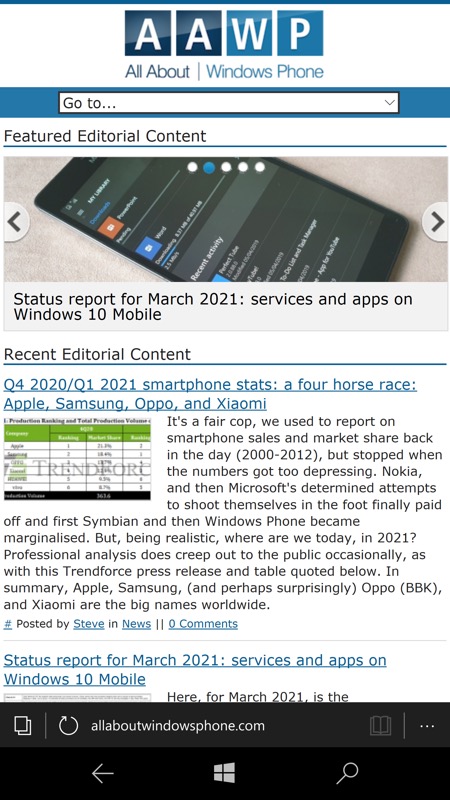 Another typical page from BerkshireLive. If you're lucky then you can read a few sentences between broken adverts and broken images. Not entirely Edge's fault, again, it's that some mobile sites are just rubbish; (right) Some sites are pretty good though. AAWP(!) works very well indeed on mobile under Edge, as here. Phew! 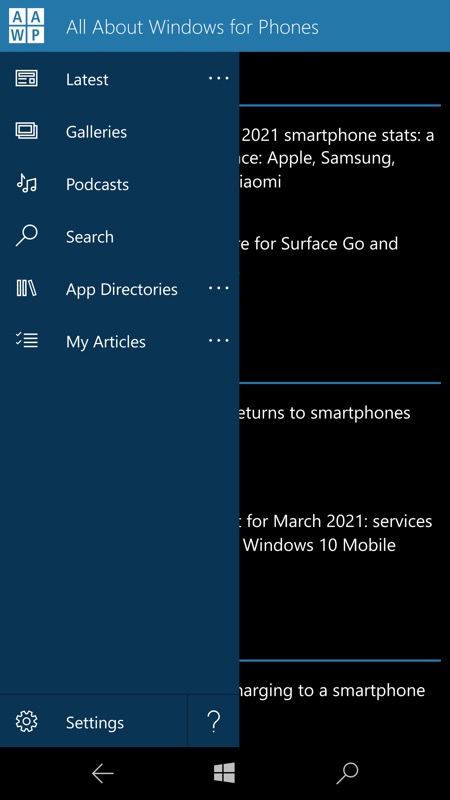 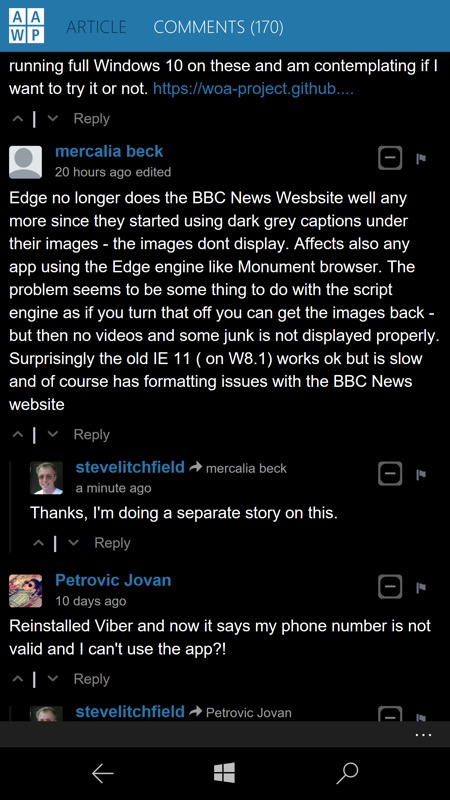 Even though AAWP works well under Edge, it works even better under (plug, plug) the AAWP Universal application, as here. Hamburger menu, easier access to comments, just say yes. And it can be yours for the low, low price of err.... free!

With Edge 'Legacy' (again, under Windows 10 Mobile, mainly) now out of support on even Desktop, there's zero chance web/javascript developers will test their page creations against the browser, so I don't expect things to get any better, sadly.

The old-timer in me says that javascript is the spawn of the devil and shouldn't be allowed. But then back in the real world there are interactions with modern sites that I'm sure I/we all take advantage of without even thinking. So it's hard to be too tough on the Web getting 'better', or at least more 'capable' across the board.

In terms of Mobile, Web developers test their layouts and scripting through iOS and Android in their last couple of versions, with Safari and Chrome. And then possibly Firefox too, on a handful of modern smartphones. I can't blame them for not thinking of poor old Edge under Windows 10 Mobile, even if something as simple as a missing image really shouldn't happen - do we need scripting around a simple picture?

The main site quoted in AAWP comments was the BBC's News pages, for missing images, but I'm sure there are other examples. Comments welcome.

PS. Ironically, some have pointed out that the decade old Internet Explorer under Windows Phone 8.1 fares better and displays the missing images, but that will be because it's missing the scripting out completely rather then trying to interpret it and failing!