No matter how minimal and stylish Metro UI can be (and I know that's a discussion piece that could open up a huge amount of debate), there are always people ready to bend it as much as they can without breaking it. Those live tiles just call out to be edited, tweaked, spun, photo-shopped, pushed, filed, stamped, indexed, or numbered. But without some help that's not an easy task for the regular user. And as if on cue, over the horizon comes WizTiles.

Allowing you to add your own live tiles, marking them as shortcuts to features on your Windows Phone, all with custom artwork, icons and text.. that's a heady mix of things you can do, and it's to the credit of the developers that the WizTiles app that lets you set up all these options is incredibly clear, with little fuss or complicated "programmy" things getting in the way.

It's very important to stress here that WizTiles is not a homebrew application - it's available in the Marketplace and follows all the rules that a Windows Phone application should follow. That means the ability to talk to other applications and areas of the Windows Phone operating system is limited. 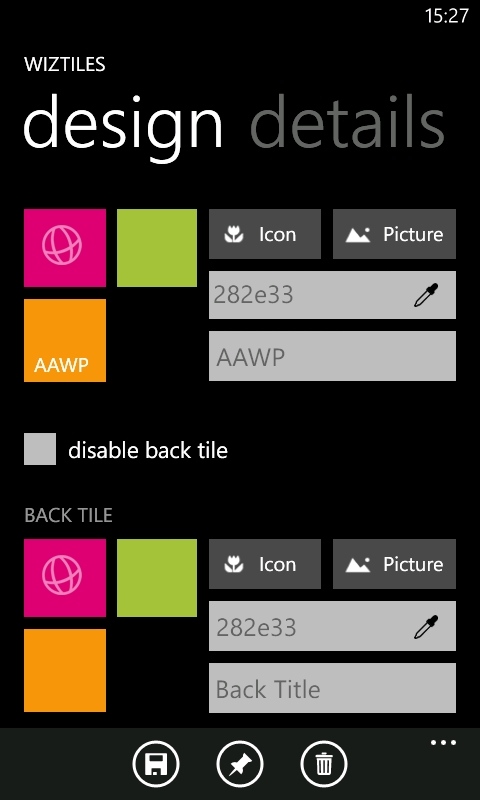 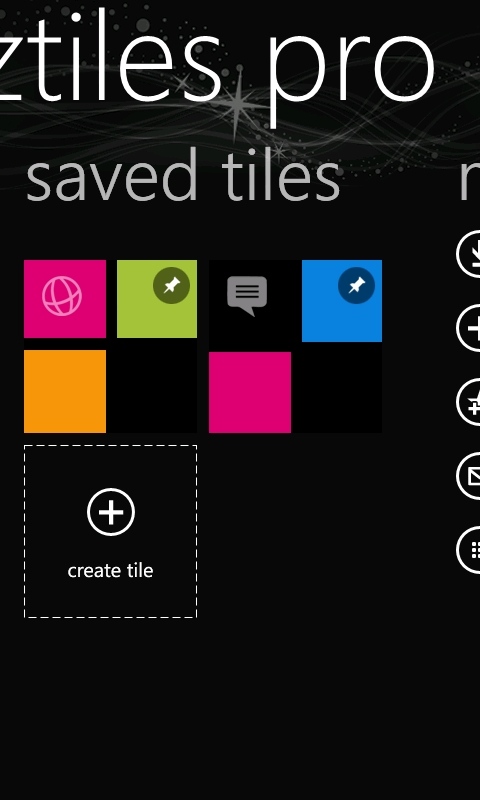 That limits WizTiles in some respects (unlike homebrew systems such as Supreme Shortcuts, where you have a huge amount of flexibility, but you do need to have a developer unlocked handset). The biggest loss is that you can't launch an application from WizTiles - you are limited to a handful of shortcuts to the built in applications.

The saving grace is the Web Browser launcher, because you can associate this with a URL, and you can have multiple web WizTiles for the same function. So I've set up a WizTile to point to the AAWP website, and also another to the AAWP twitter page. This gives some flexibility, but not as much as the geekerati would maybe like to see.

But then I think WizTiles is not primarily about creating a complicated macro system on your live tiles, it's about fashion, it's about image, and it's about customisation. And the big signpost is in how themes are handled.

The visual of each tile has three elements, icon, text, and picture. The text is generated by the system, the icon is selected and is the primary "shape" that you see on a tile, and the artwork is the base of the tile on which the other two elements are added on top.

The themes allow some rather wonderful use of artwork. Here are two examples. 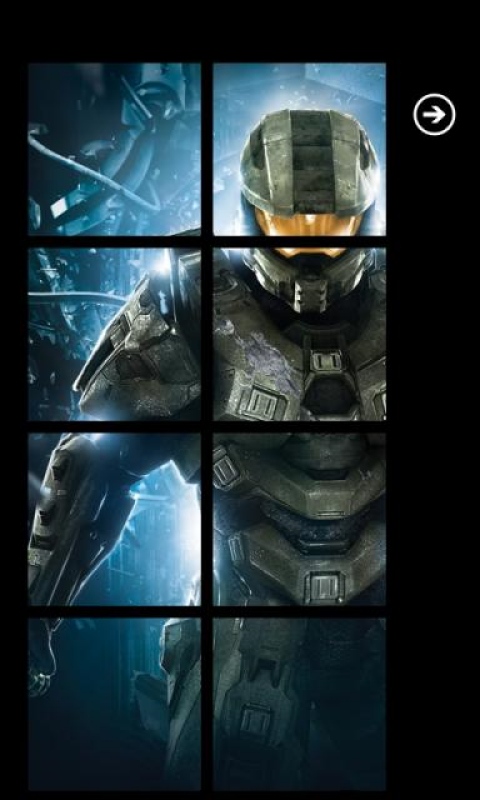 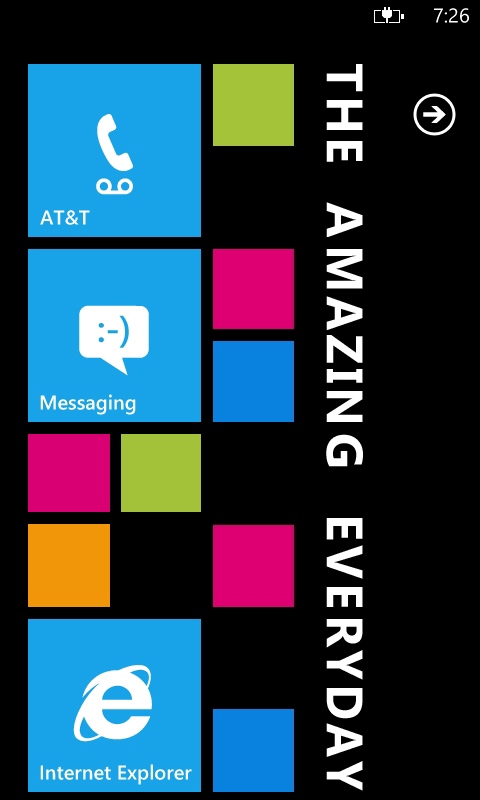 Both of these can be downloaded from inside the application, and then you can apply them to either existing tiles or create new ones. A bit of shuffling around on the home screen, and you have something that still has the look of Metro, but is now definitely personalised and something that you want to have.

If you grab the trial version of WizTiles, you'll find that the limitation is the number of themes you can have loaded onto your phone at any one time - another strong indicator of where WizTiles is being targeted. The same goes for future plans, which include an image cutter to make creating your own multi-tile images far easier than it is now (which requires a bit of work on a deskbound computer to cut the image and apply the correct nine pixel spacing between tiles on the original image). 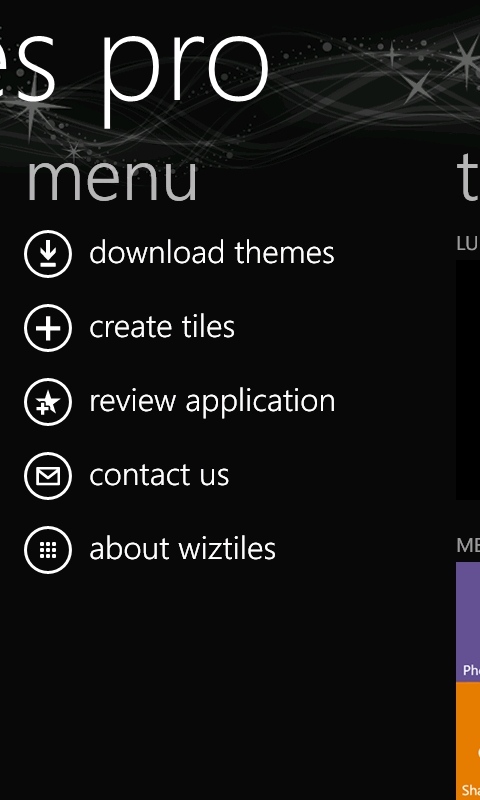 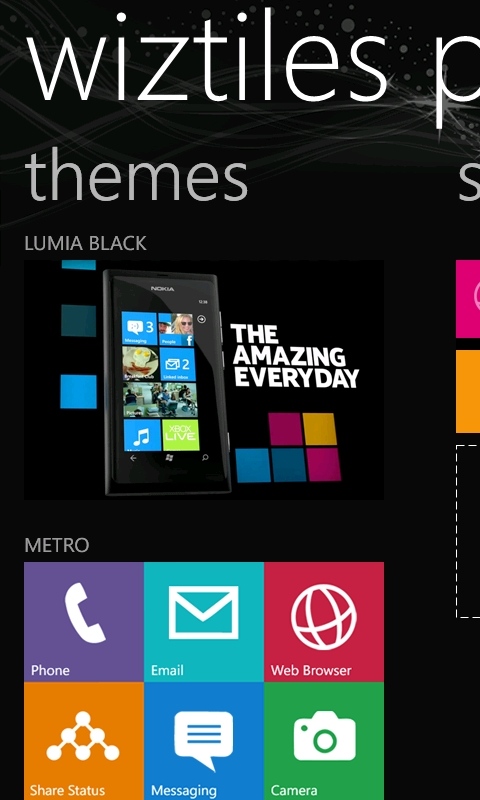 These additions should make WizTiles far more accessible to the regular user of Windows Phone, so I look forward to that. But they do need to address the application launcher issue - if they could find a way to pair up WizTiles with first and third party applications on a user's phone, they would have a powerful customisation product that I could see being incredibly popular.

Right now I could quite a few marketing people getting interested and allowing them to "brand" demo handsets with corporate logos and iconography (Nokia really should consider how impressive that Lumia "Amazing Everyday" layout is), and I'll be keeping an eye on what is a curiosity at the moment, but could easy jump to the status of a celebrated third party app with a few careful iterations.