Time for this week's Xbox Live review, and I've spent the last seven days working through Gerbil Physics, a delightful little puzzle game that should appeal to fans of explosions and saving cute little animals. We've seen something similar before on Windows Phone, but how much difference does the addition of a friendly rodent or two make? 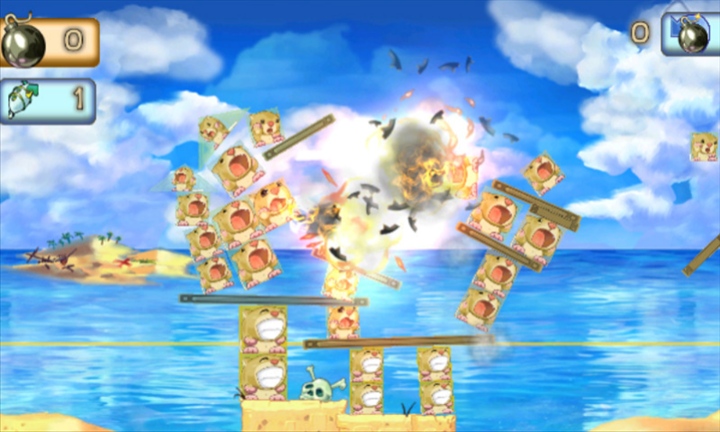 Xbox Live fans might recognise the concept of the game from 'Implode!' (reviewed here). Each level starts with a stack of gerbils in various block-like containers, and a line drawn a little bit above the ground. Through the strategic use of bombs, you can use their explosive effect to push some blocks around the landscape, and let a mix of gravity, leverage, and inertia collapse the gerbils towards the ground.

The aim is to get all the gerbils below the line to finish the level. 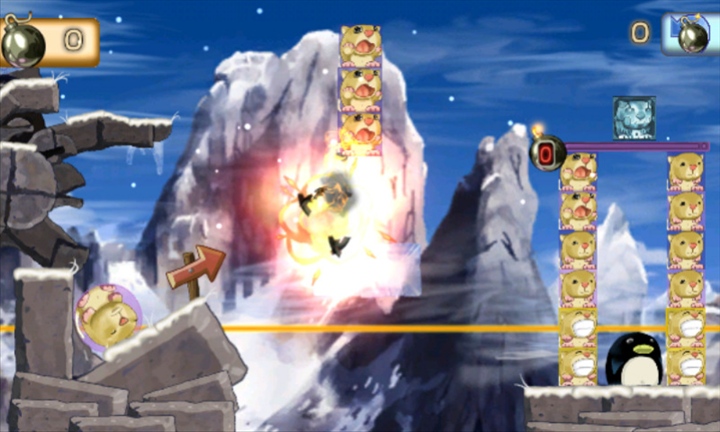 Concept over, what makes Gerbil Physics unique? Apart from the cutesy graphical element (more on that shortly), what I've spotted is the fusing of the bombs, and the more awkward terrain where the levels are constructed.

Unlike Implode, where you can plant multiple bombs and then trigger them as one, once you place a bomb into the level in Gerbil Physics it's going to explode after just a few seconds. That's enough time to either tweak the location or remove the bomb altogether. This also means that you can plant one bomb, let it explode and see the results, then plant another bomb to help you complete the level - or you can plant bombs in quick succession to have the explosions happening on top of each other.

The levels might start out on safe ground, but as you work through, you'll find exploding fruit littering the ground that will explode when a gerbil lands on them. Used wisely this can help you complete a level using less of your own bombs, which will give you a far better score than when depleting your stock. The level design here is exquisite, with different block shapes interlocking nicely to create puzzles that do appear simple at first look but have a lot more complexity when you start to play. 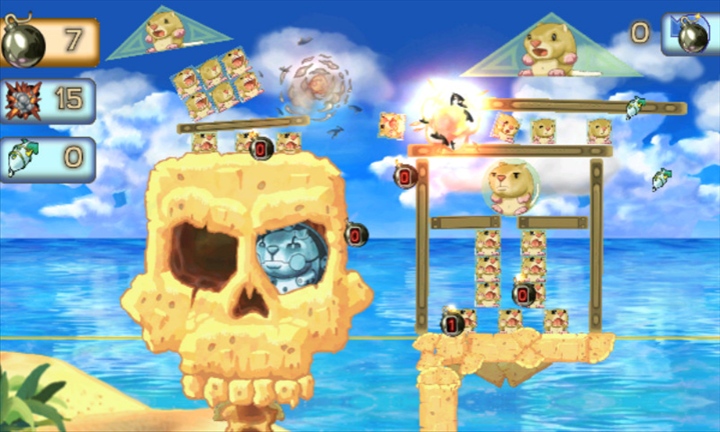 You also have gerbils popping up that need special handling, such as the red gerbil which cannot have anything hit it during the game play. If it does get banged about by another block, then the level's automatically over, no matter how many of the other blocks are below the goal line.

I'm not sold on the whole gerbil graphics and the natural outdoor looks that infuses the game. The music, that sound right out of the quiet room in a nursery add to the whole air of cuteness in the game, along with the squeaks and excited noises from the gerbils. Personally, I prefer the simple blueprint style in Implode, but as the Windows Marketplace continues to grow, a strong theme that helps to market a title is a must, and I cannot disagree that Gerbil Physics has that. 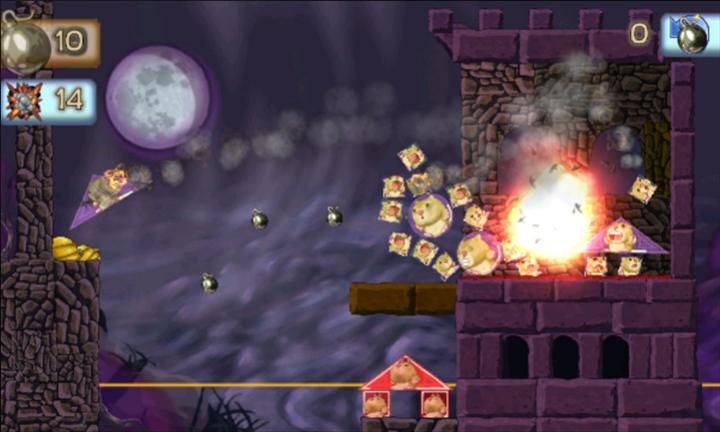 The physics does feel right, so the blocks travel in the expected direction when the bombs go off. But I get the feeling that the blocks are very light - rather than big stone things and solid constructions, these are light and airy things, which are easily moved. That fits in with the idea of small rodents being thrown around, but I think I would have liked the game engine to give the blocks a bit more solidity while playing. Wholly subjective, I know, but while the physics feels right, I think it harms the gameplay by having less heft.

Most importantly though, Gerbil Physics is fun to play. It's easy to get lost in a long gaming session, or just pick it up for a few levels. There's a certain innocence to the game that comes through in the playfulness. You can retry levels as many times as you want, there's no real danger or clock watching to put pressure on you, it's just you and your bombs.

Personally I'm going to stick with Implode, but there are free trials of both, so you can download them and decide yourself. Both are rewarding and should give hours of puzzling destructive fun.