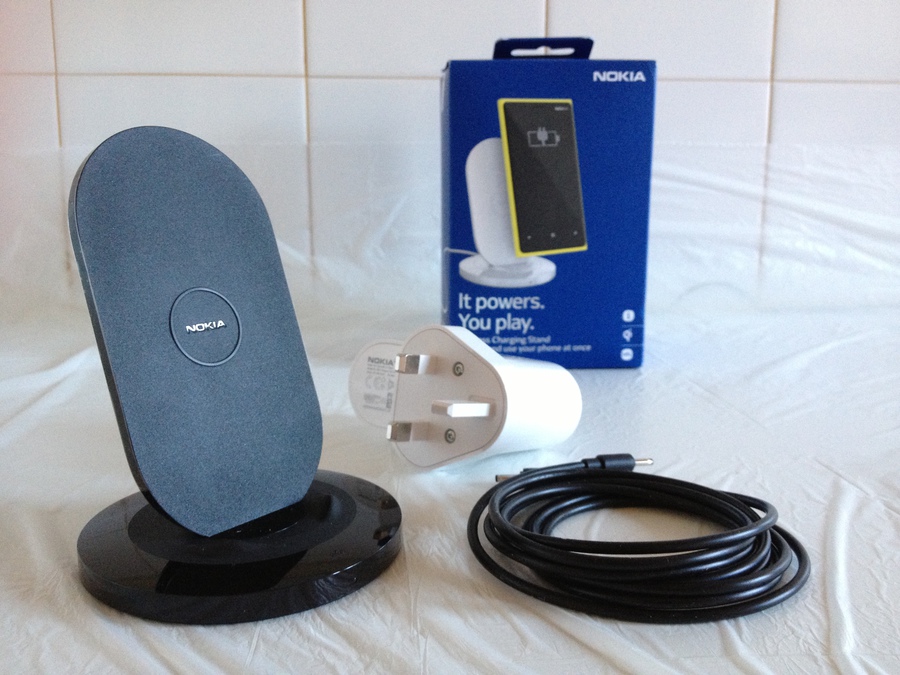 As Nokia does with all of its devices these days, the DT-910 is compactly packed with no unnecessary rubbish. In the box, you'll find instruction leaflets, and the charger accompanied by its mains charger and separable cable. 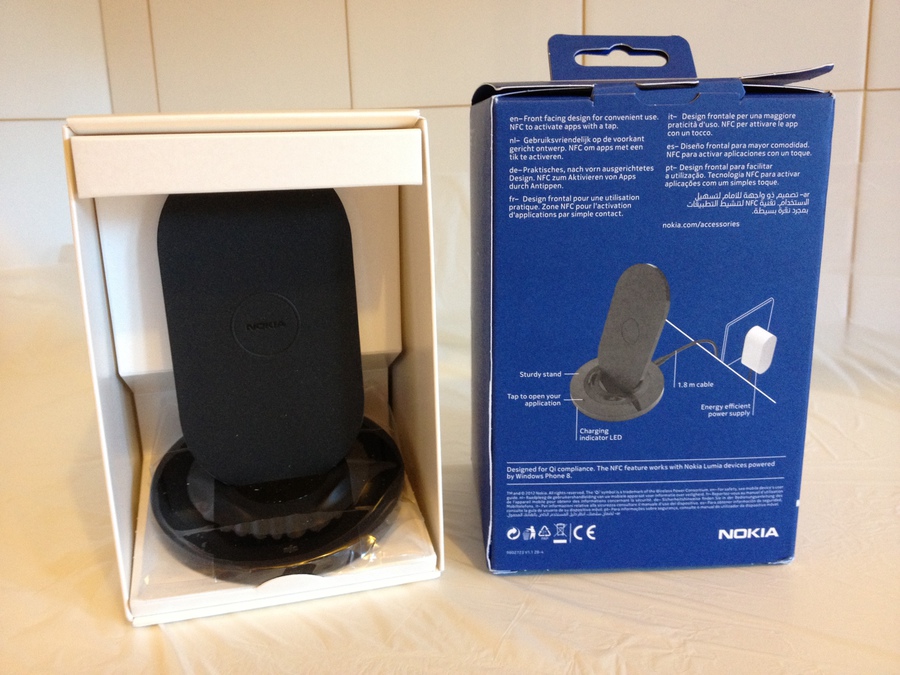 The charger itself was wrapped in plastic film, even around the plate's rim, so you'll need to make sure you get it completely stripped down for regular use.

As noted in Steve's review of the DT-900, the (same) charger is a very different and much larger design than we find with Nokia's Lumia range (e.g. the AC-16X). Nor is it interchangeable with phone chargers as it demands 12 volts instead of the usual 5.5 volts (as found on USB ports). It's regrettable that the wireless chargers have this requirement, because no matter how modern and stylish the charger may look, it takes up too much space. 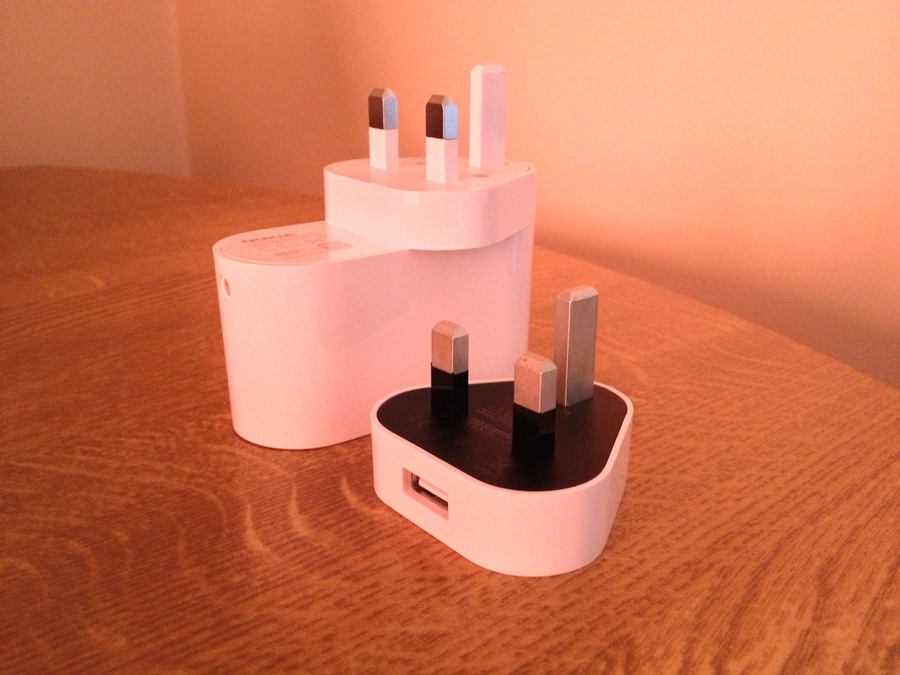 Getting started and finding the NFC spot

Using a wireless charger doesn't require a Physics PhD, all you need to do is connect it to the mains and sit your phone in place and the Qi hardware on both devices does the rest. However, while Steve's review stated:

Although there's a fold-out manual for the DT-900, it's absolutely not needed - this is plug and play tech

This isn't quite the case with the DT-910, as it also includes an NFC tag that is intended to trigger the launch of a user-selected app on the phone. The software for this is built into Lumia phones, and includes an always-on Clock and Weather application. However, you can select any app on your phone. For example, I opt to launch a battery monitor app so I can have a big read out of the battery level. What's more, the NFC tag in every DT-910 is unique so that you can have multiple chargers and assign a different app to each. 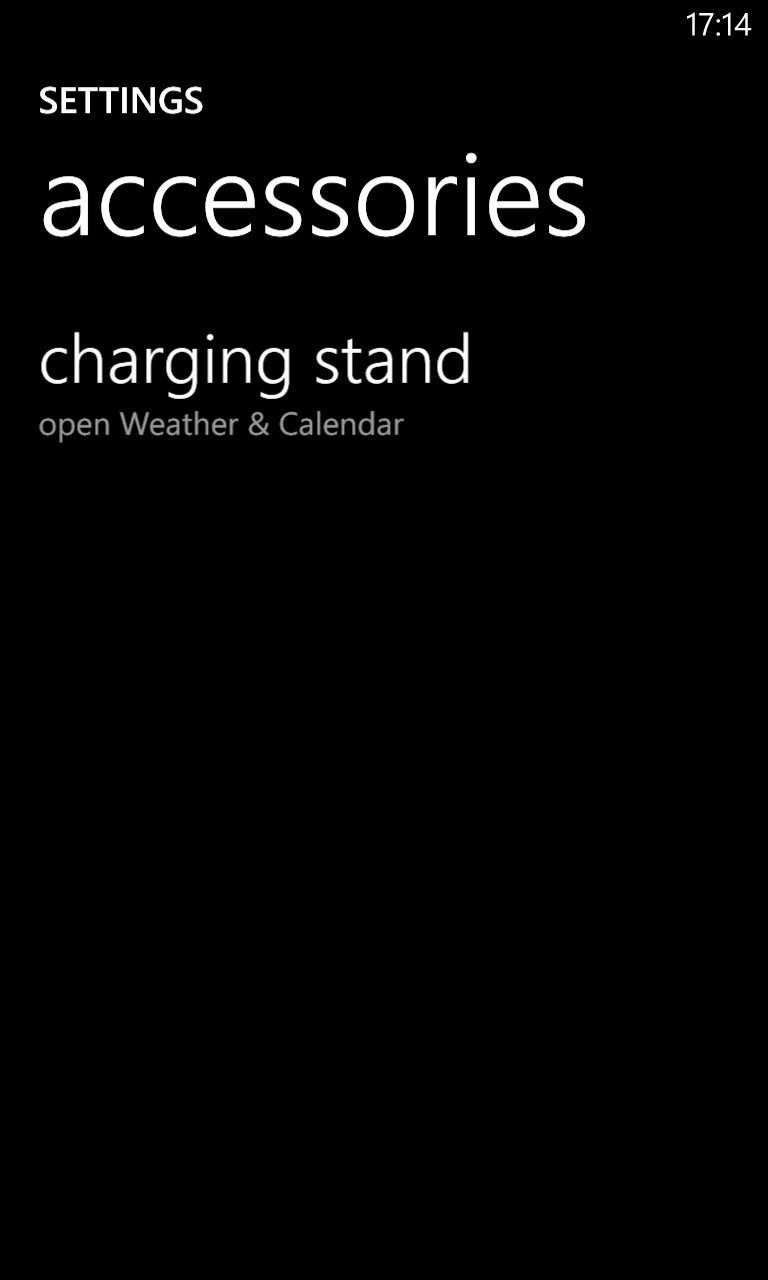 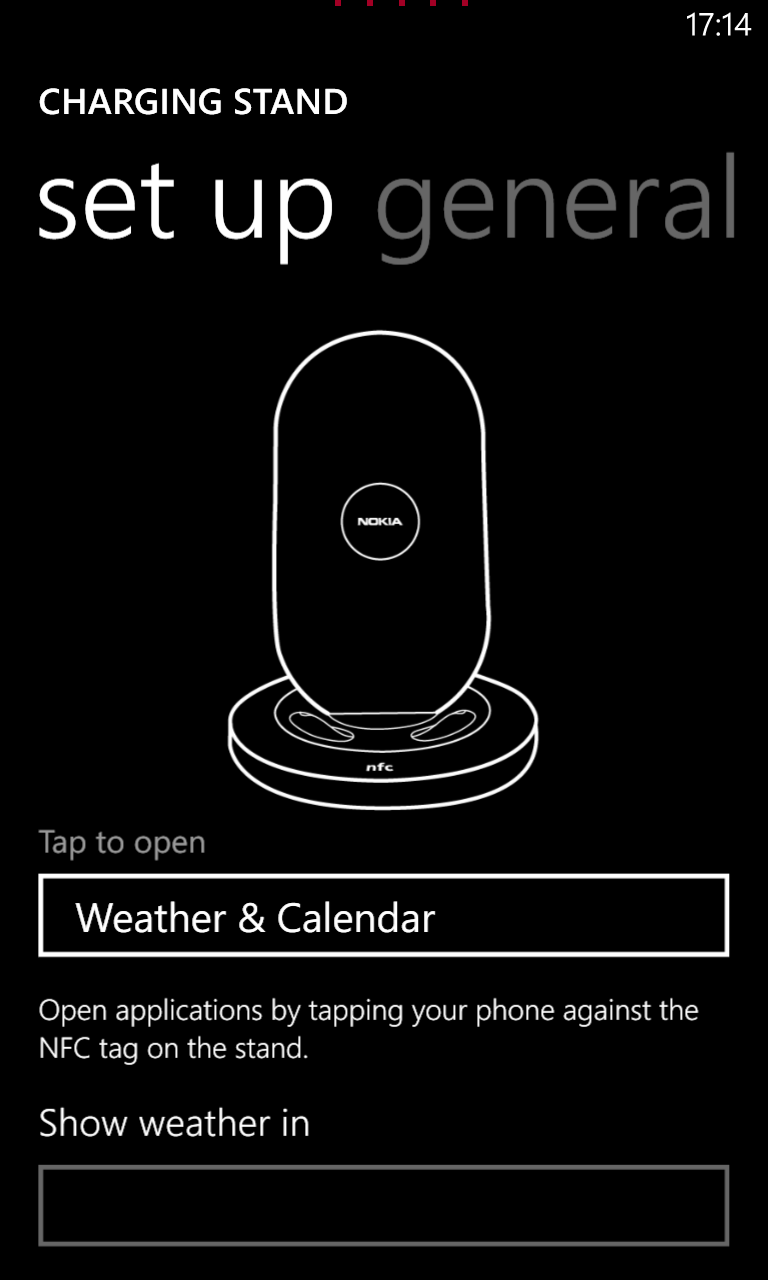 Configuring your Lumia to work with the DT-910

When I first heard about the DT-910, the idea that placing the phone on the charger would cause charging to 'magically' begin and for an app to automatically launch sounded wonderful. However, the reality of the DT-910 is not like that.

The NFC tag isn't in the charging plate to line up with the Lumia's NFC transceiver (i.e. at the top). Instead, it's in the base of the charger. Not only that, but every time it's used, the user has to tap an 'Accept or Ignore' prompt on the phone. 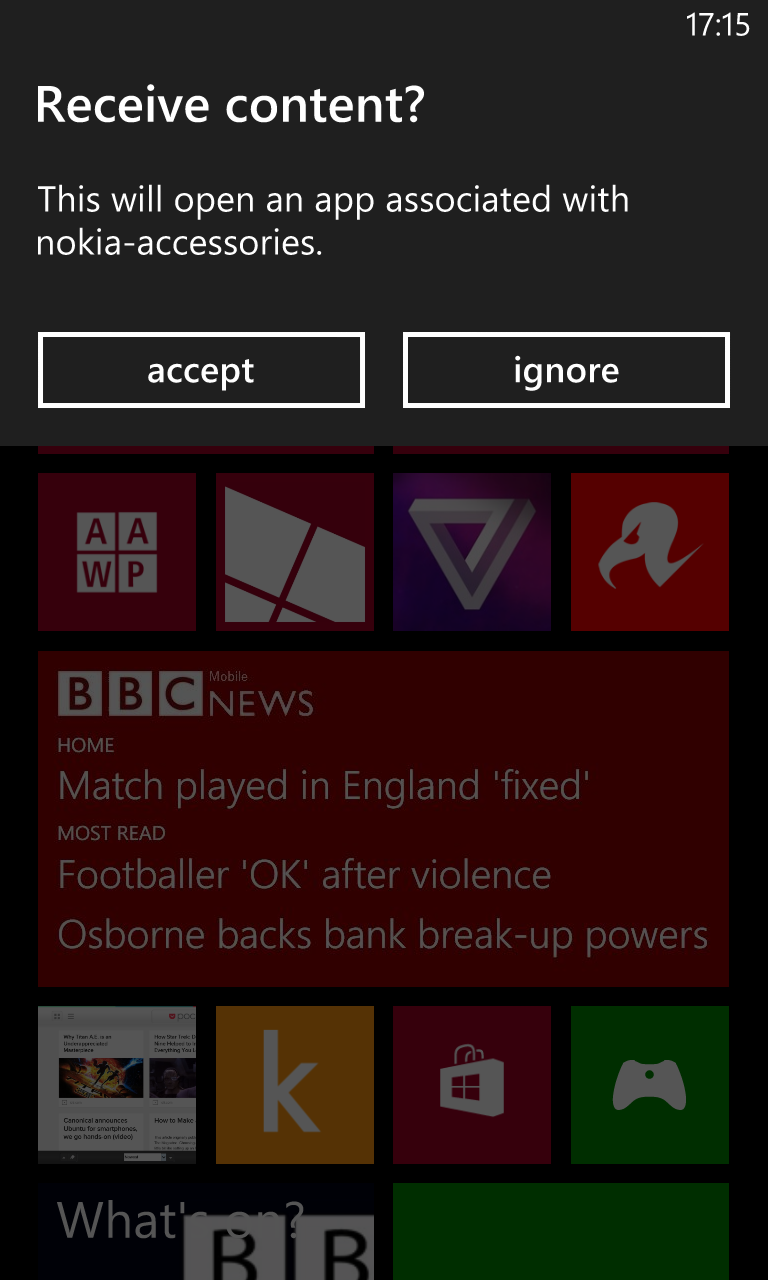 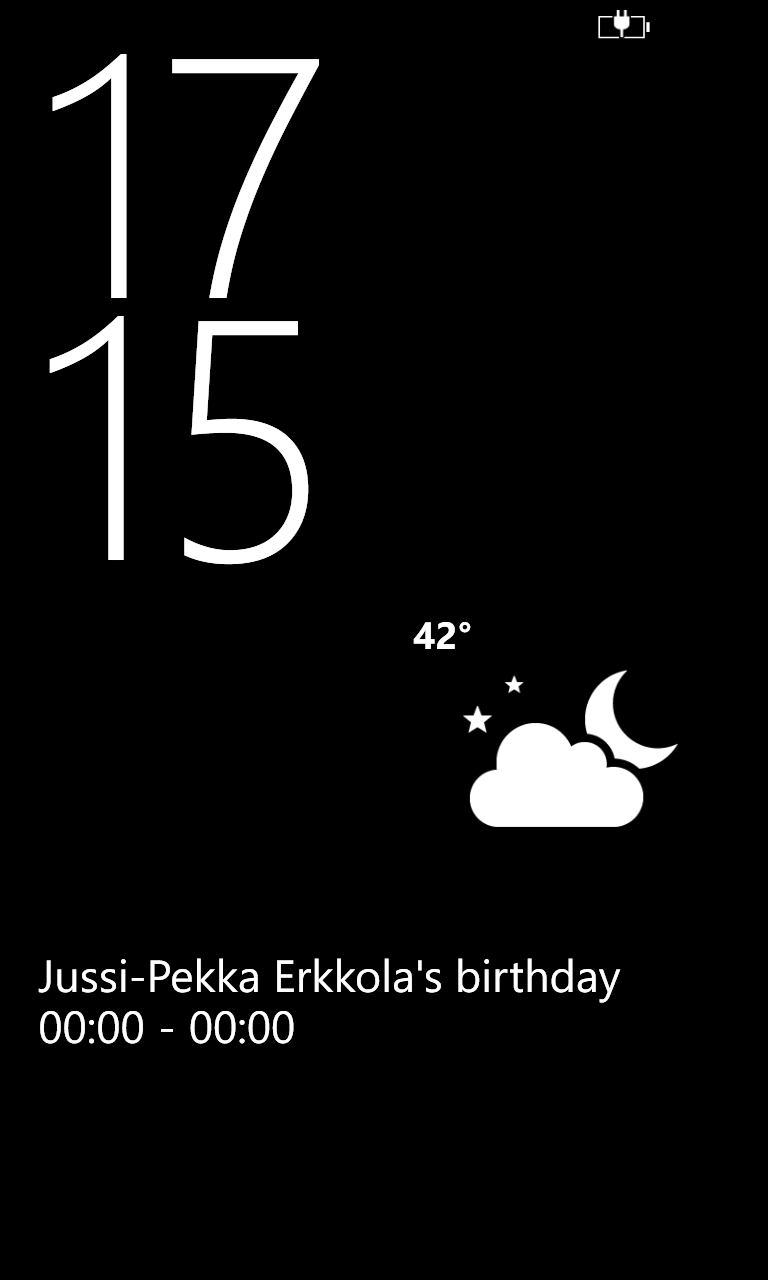 So rather than being a one-step operation of just placing the phone on the charger and everything just happening, you have to A) Tap the phone to the base, B) Touch the 'Accept' option, and finally C) place the phone in the charging position. For those not keeping count, that's a three step process. That level of (metaphorical) friction begins put you off using the DT-910's unique selling point. 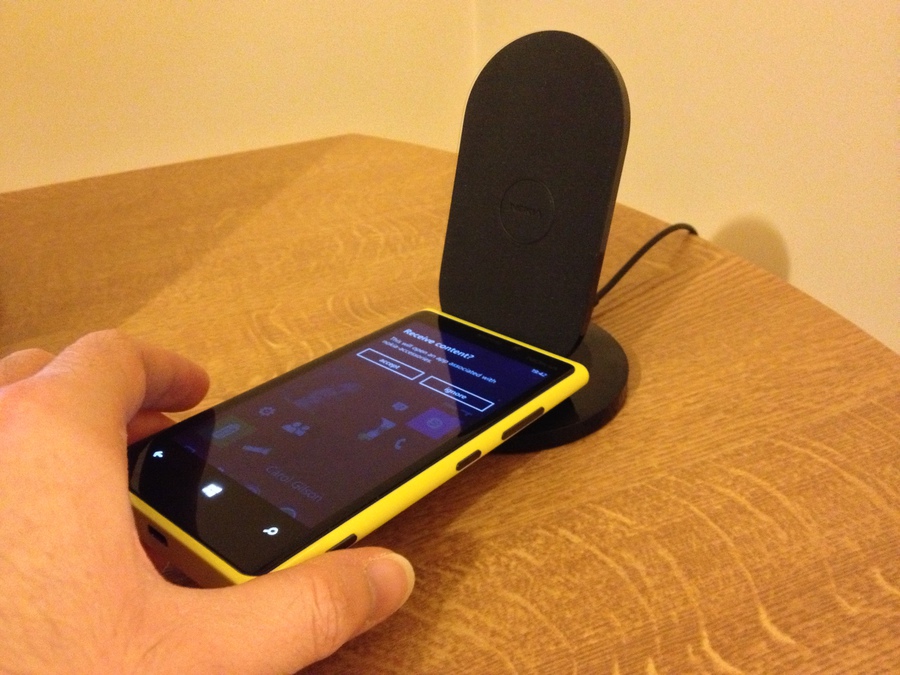 Do note that you don't have to use the NFC feature, the phone will charge quite happily without using the NFC tag. 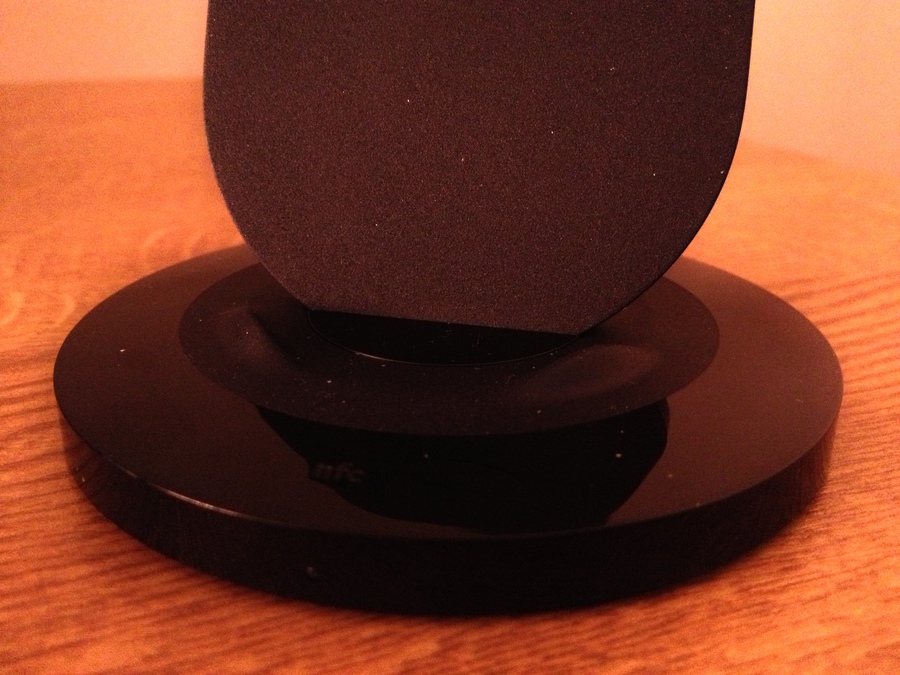 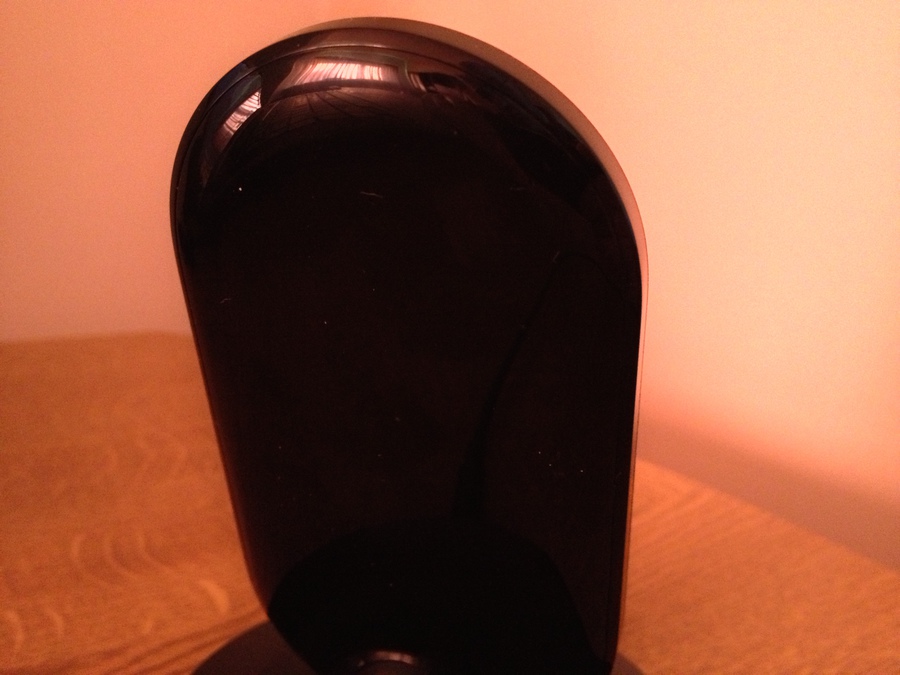 The glossy behind of the DT-910

A white LED switches on in the base whenever the charging plate is active. Fortunately, the LED is quite small so it's not likely to cause unwanted illumination in a dark bedroom, etc. 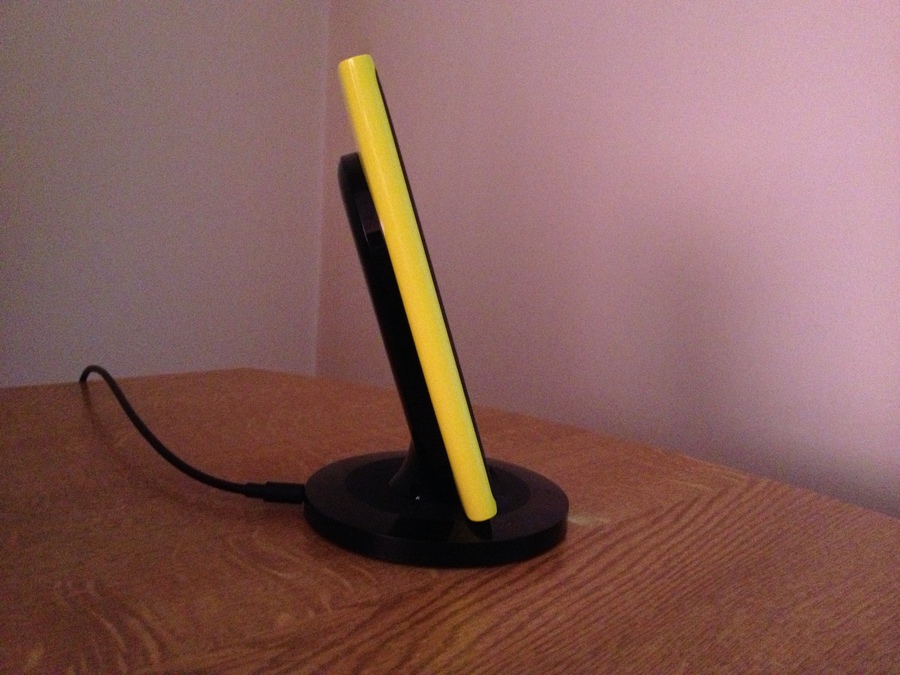 The cable supplied with the DT-910 is 1.8m long. This is understandable as it gives freedom for setting the charger up in a fixed spot well away from a mains outlet. However, if you're just setting it up on a desk that is next to a mains outlet, the cable can become quite unmanageable. The cable from my review unit is mostly bundled up in a hair band, with the bundle dangling off the back of my desk – not pretty. 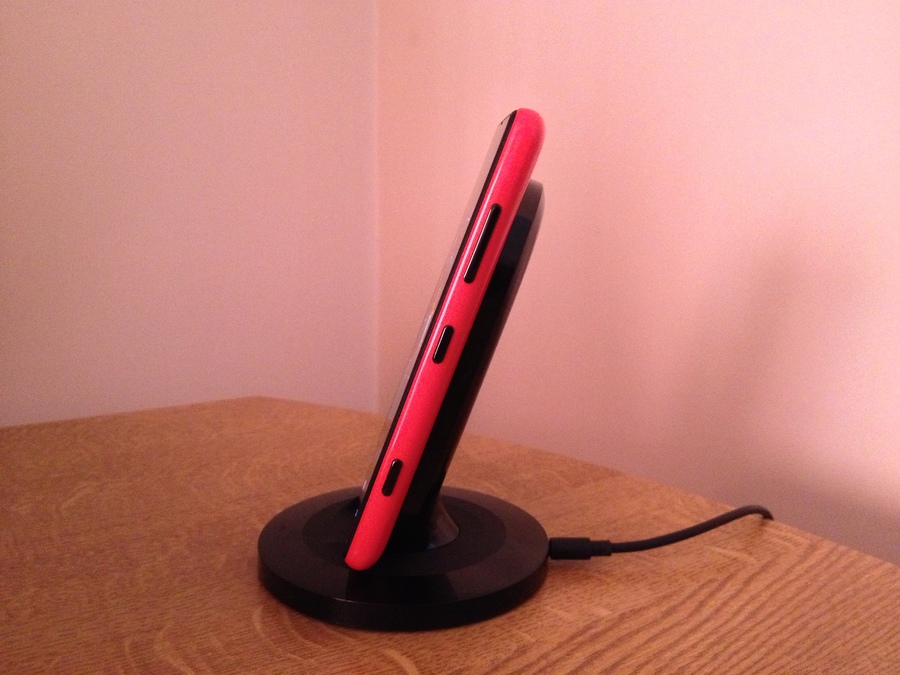 As noted in Steve's DT-900 review, wireless charging does incur a drop in charging speed and efficiency, but not too much. In the DT-900 review, Steve estimated that the charging rate drop was about 15%, his results are plotted below. 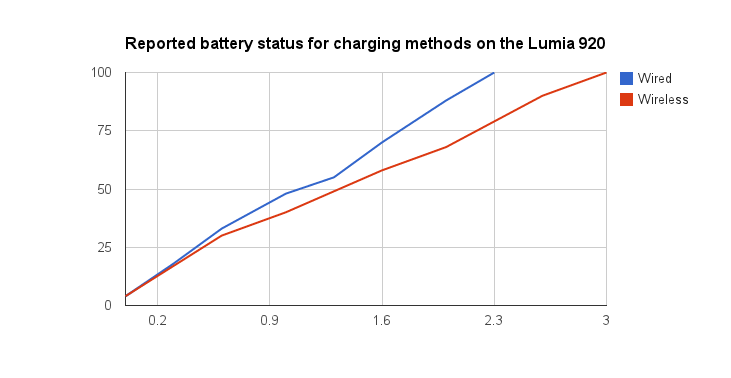 When I tested the DT-910, I made use of the Battery Sense app on the Lumia 920, which plots a graph of battery level over time. From the following screenshot I inferred the charging rates by measuring pixels, which suggested the phone charged at 30% per hour on the DT-910 and 36% per hour with the AC-16X charger supplied with the phone. That difference is in line with Steve's measurements, given the margin for error. 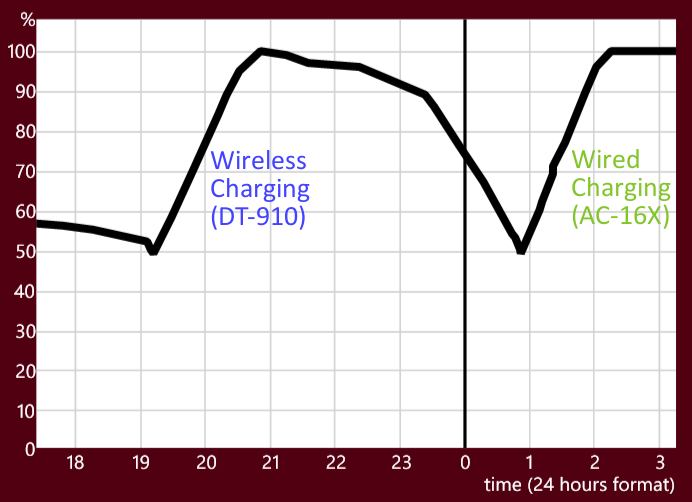 There has been much talk on the Web about using the DT-910 with Qi-enabled Android phones. In principle, it should work with all devices that comply with the Qi standard. I put it to the test with my new Nexus 4. While the DT-910 charged the Nexus 4, it did so very slowly because, as many others have noted, the two devices continuously disconnect and reconnect. 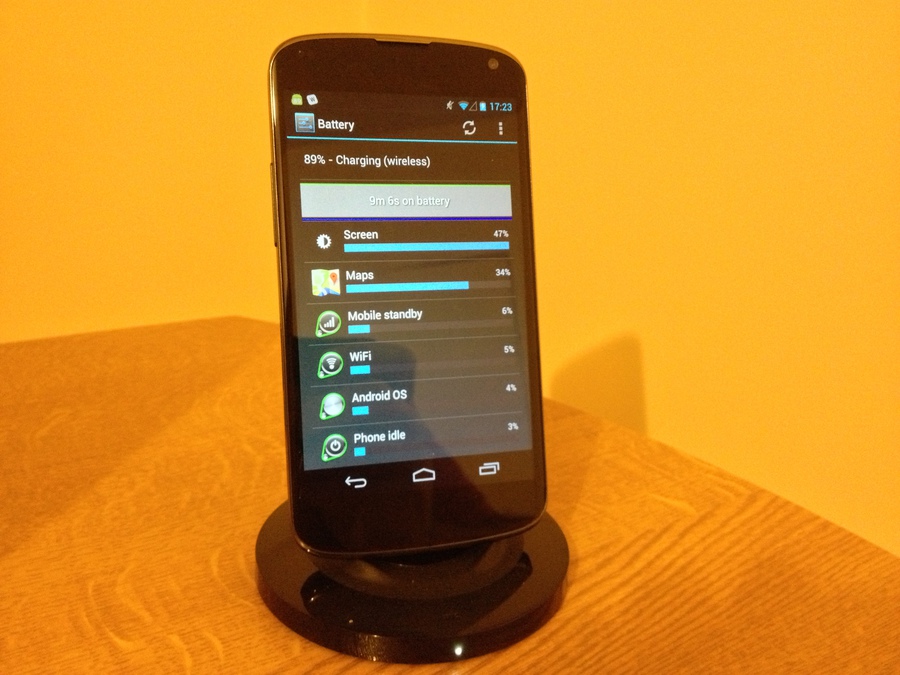 Charging the LG Google Nexus 4 on the Nokia DT-910

I used similar methods to measure the charging rate on the Nexus 4 as I did with the Lumia 920, and found that the charging rate when connected to the mains was 28% per hour, but on the Nokia DT-920 it dropped by half to an average of 14% per hour. 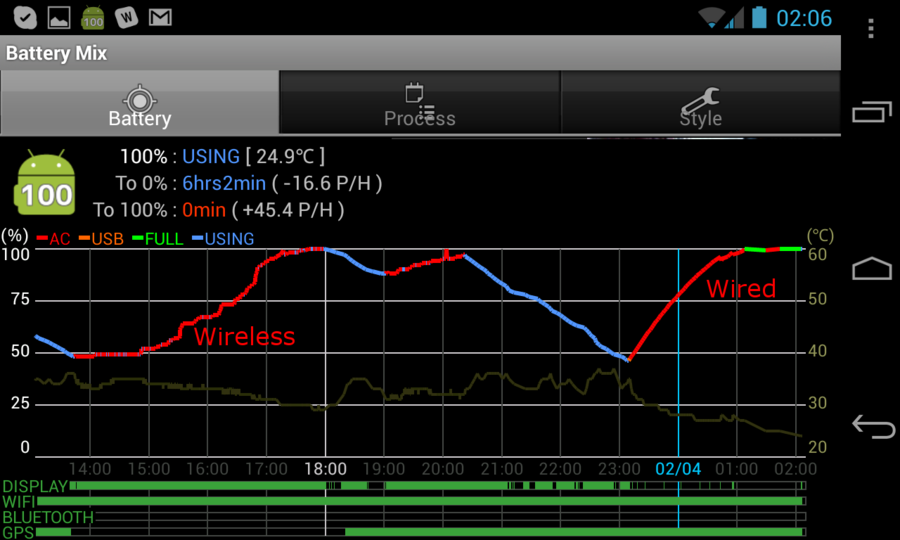 Charging the LG Google Nexus 4 with the DT-910 and a third party mains adapter - Note the on-off patterns in the wireless charging trace.

Having any sort of stand for a smartphone helps turn it into a desktop assistant, effectively giving you a second screen to check email or calendar, etc. Combine that with the convenience of being able to place the phone on a stand that will begin charging without having to fiddle about connecting a charging cable is an absolute win.

That desktop stand, though, has a significant design chink in that you have to perform a separate action to launch an app when you place the phone to charge. This unique selling point of NFC launched apps should be a seamless operation that doesn't require any thought by the user – it should just happen. Having to touch the phone to the best and respond to a prompt BEFORE placing the phone on to charge makes the whole thing pointless – why not just manually launch an app as normal before placing to charge? 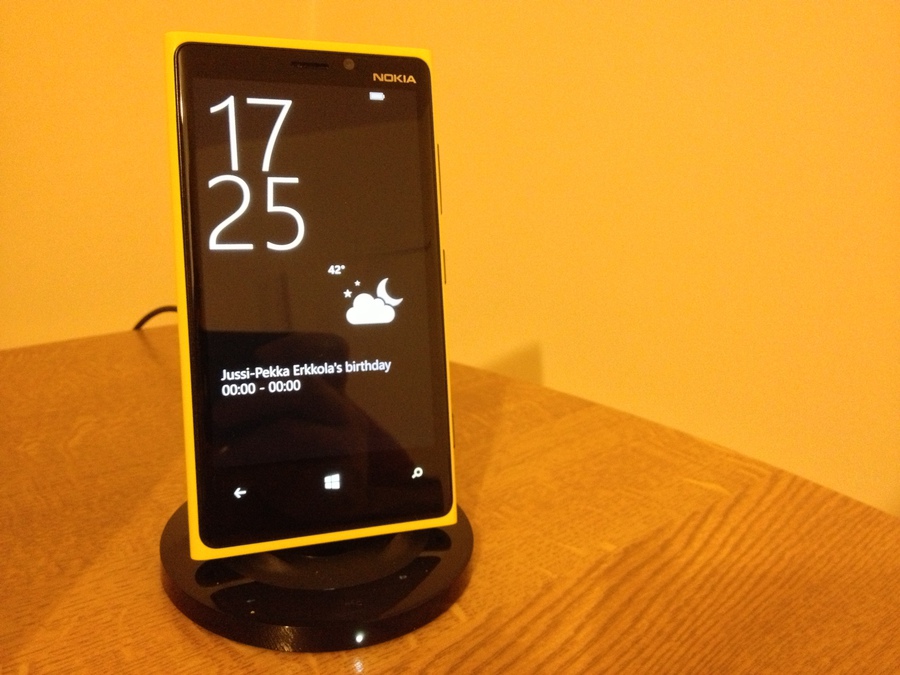 Perhaps I'm being a tad harsh on the DT-910, but the other thing to seriously consider is that it costs 70 UKP. That is a lot of money, and if I were to invest that much money into an accessory I would want it to be perfect.

Considering the price, also bear in mind that, going by the current reports of compatibility with the Nexus 4 and other Android phones, it may not work properly with other Qi enabled devices. Therefore, it should almost be considered proprietary to the Lumia line.

If you absolutely want to have your phone propped up while it wirelessly charges, then the DT-910 is the Qi charger for you. However, the above two issues raise serious questions against the considerable price tag.

Disclosure: The unit covered in this review was kindly supplied by MobileFun.co.uk who have asked that you check out their other Lumia 920 accessories.