It seems to be the norm, at least for me, that the flagship Windows Phone 8 device from a manufacturer is just a little bit too big for me, a little unwieldy, and while it has the best specifications, that's not what I'm looking for in my smartphone. Just as everyone else on the All About team went for the Lumia 920 while I had my eye on the Lumia 820, the same is true of the HTC Windows Phone 8S. The smaller brother of the 'signature' Windows Phone 8 device from HTC (the popular in the office 8X), the HTC 8S was the one I wanted to get my hands on.

Well, the HTC 8S has been here for the last week, and I've given this smartphone a decent workout. It's certainly what I physically expected it to be, but some design decisions by HTC (perhaps with some input from the networks) has left the 8S with a flaw that, while not crippling, seriously limits the expansive capabilities of a Windows Phone 8 device. Spoiler: it's the internal storage.

But we'll get to that in a moment. I want to talk about the physicality of the smartphone first of all, because in the hand the HTC 8S is a winner. 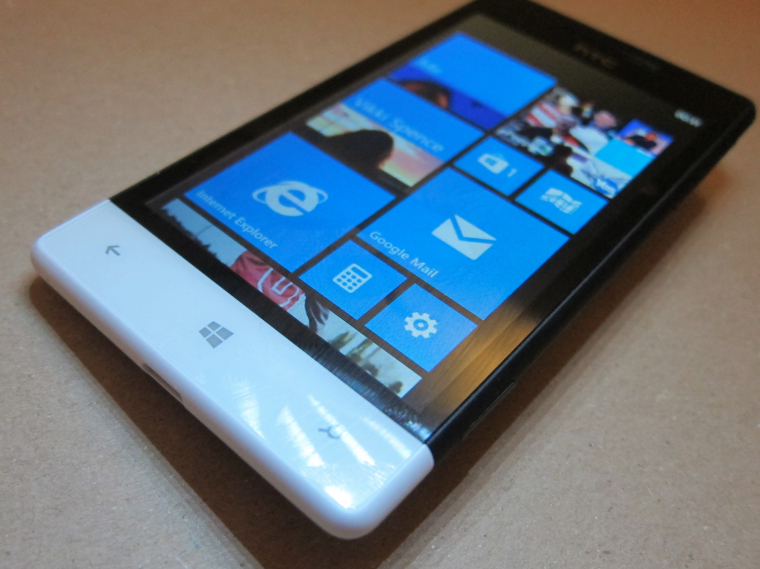 It mirrors the styling of the HTC 8X's design that was 'inspired by the live tiles of the user interface itself'. This means that you have a perfectly flat front facade of the device (naturally using toughened glass, in this case Gorilla Glass 2), and a curved back which tapers nicely in to a central thick spine. The camera, speakers, and HTC/Beats Audio logo are all perfectly centred, and it looks right. The screen itself is a four inch diagonal Super-LCD screen, with the smaller 800x480 resolution common to Windows Phone 7.x devices.

To be honest I'm not that worried about the pixel dimensions, even though there are devices with larger screens and more pixels. The Windows Phone UI is not built on packing information in, so the smaller screens cope just as well with the various elements as the larger devices.

What might be of more interest is the washed out feeling the screen has. Side by side with other Windows Phone 8 handsets and you'll note the muted colours, less vibrant palette, and reduced viewing angle on show. The screen is one area of compromise on the HTC 8S, but this is the one compromise that I think I could live with.

Probably because, physically, this smartphone feels right. The smaller dimensions of the handset, as compared to the 8X, make it a comfortable fit in my hand. It's easy for a single thumb to cover the entire touchscreen, my fingers wrap nicely around the edges when it is in the palm of my hand. More importantly, one of the design flaws I found in using the 8X, where the power and volume keys were hard to find on the edge, appears to have been negated on the 8S. Because of the smaller size, my fingers are naturally falling onto the location of these physical buttons. They still need a decent application of pressure, but they are now easier to find by touch and position. 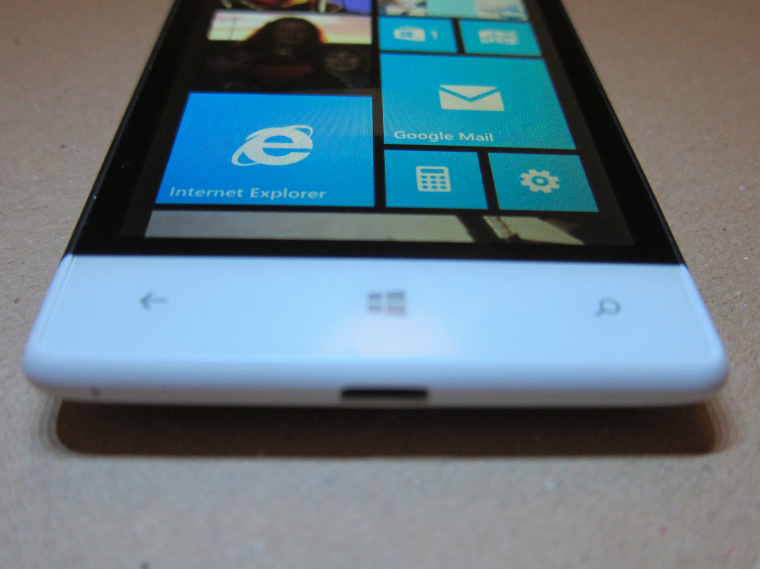 The other major issue I had with the 8X design was not knowing which way 'up' was when talking the device out of a pocket. While there is still a lack of physical cues to the orientation, the addition of the coloured stripe along the base of the phone means that I can register the 'bottom' of the device out the corner of my eye. This means the 8S is slightly faster and easier to start using on a daily basis.

I do think HTC have missed a trick with the bottom strip. While the rear panel comes off (to reveal the MicroSD and SIM card slots) and could be easily replaced by a different coloured panel to suit your mood, the three soft keys also carry a personalised colour strip under the glass facia. You could mix and match, but it's a shame this wasn't something HTC could have designed into the hardware.

The back panel is tricky to remove, and the instructions in the box amount to an arrow saying pull down. You will need to exert some effort to remove it, and the effort felt like enough to break the panel. In the end I used a small 'splunger' normally used to leverage computer chips off a circuit board to ease the process. 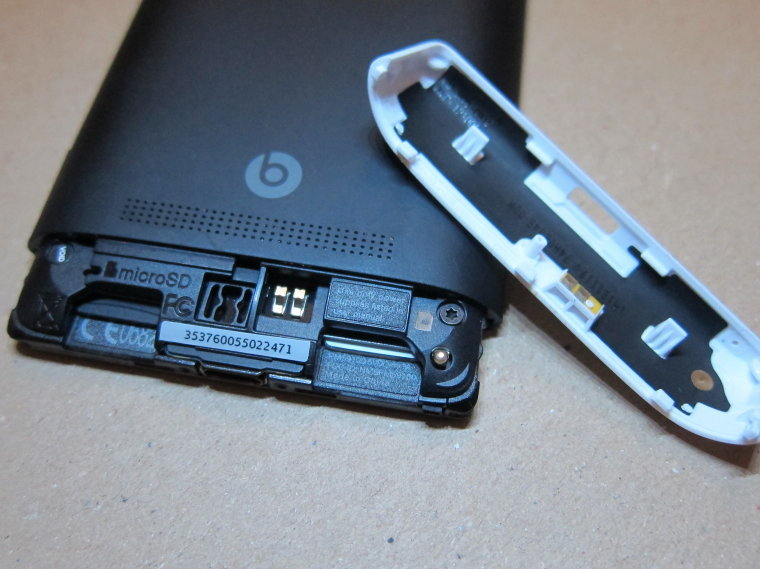 Under the panel you'll find two cutouts for your Micro SIM card and a MicroSD expansions card (the battery is, unfortunately, sealed in, so this same 1700mAh cell is all you are going to get). Because of the size and price point, the HTC does not come with 4G (LTE) capability, so even if you have a 4G sim from EE, you'll be limited to 3G. To be honest, that's not much of a problem at the moment, where I am I never felt that mobile data was too slow while walking.

Part of the 8S's remit is to keep the cost down and provide a mid-range device for networks to position in their line-up, and you can see this ethos in the camera. Just the one camera, as there is no forward facing camera that could be used for video calls, Skype calls, or self portraits as required. Personally it's not a huge loss to me, but I realise that this will be an important omission for some.

There's nothing fantastic about the rear camera either. It's a rather basic 5 megapixel shooter, which by default is set to record just 4 megapixels, keeping the photo's ratio to the same size as the screen on the 8S. In a world where the majority of images are downsampled before being posted online, this might not seem a huge loss, but it's going to make the images taken by the 8S look a little strange when uploaded to social networks like Facebook.

Unlike Nokia, HTC have not taken the chance to add extra functionality to the camera through the Lenses system built into the OS, relying instead on the default Windows Phone camera software for the entire process. 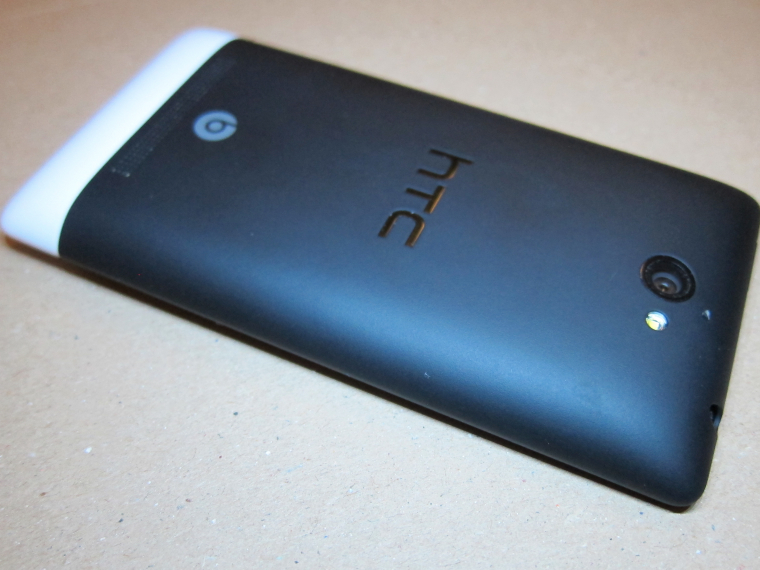 Can I suggest you fill the MicroSD slot as quickly as possible? The HTC 8S has just 4GB of internal storage on the spec sheet, and frustratingly only leaves roughly 1.1GB for user files. If you have any intentions of using the HTC 8S as a music player, to watch videos, or to do some picture taking yourself, then you'll need to get yourself a decent SD card as quickly as possible. As well as any data that applications need to store on it, the OS uses the internal storage for a number of temporary files and caches, which will start to fill up that single gig rather quickly.

Storage is complicated by the fact that any applications you download must be installed on that same internal storage - i.e. you can't shift them over to the microSD to keep some space free. This is the crippling nature of the HTC 8S. It looks great, feels nice, but doesn't have enough spare capacity to walk and chew gum at the same time.

Windows Phone 8 is familiar enough to readers of AAWP, and it would be fair to say that HTC haven't added much to the mix. Just as in the HTC 8X, they have a handful of applications they add to the firmware, and these are identical to those in the larger smartphone. The main one for many people is the 'HTC' application, which gives you a live tile holding the trademark HTC clock application. While it doesn't have the same flip-number style of the HTC Sense UI on Android, it does give the unit some branding to help it stand out in the store. In use it feels a little unbalanced and badly laid out in my live tiles, and on the smallest tile size it defaults back to the HTC logo, rather than a small but useful clock. No matter, I can see the time in the top right corner of the status bar when I need to.

There is one new application, though, and it's one that upsets me. Called 'Make More Space', it's a utility that will look at the internal storage on the 8S, show you how much space the three main areas are taking up (music+videos, pictures, and documents), and allow you to jump to those hubs and delete content. It's a sad state of affairs when your newest app on a handset is designed to get around the biggest issue of the specification list. 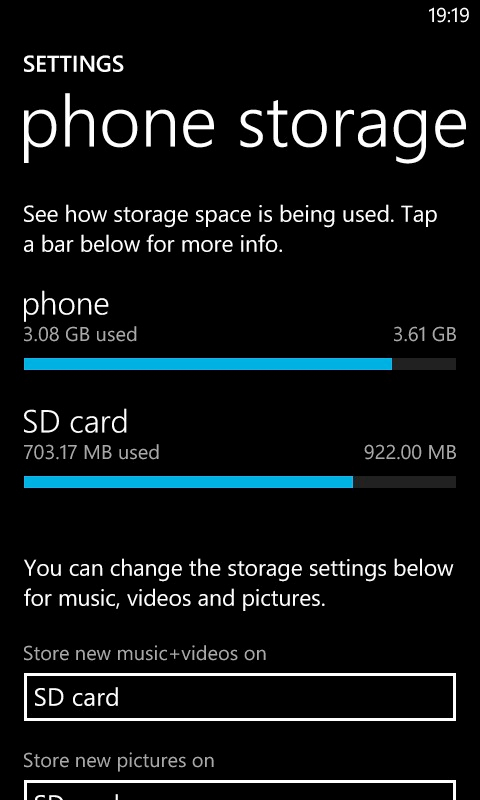 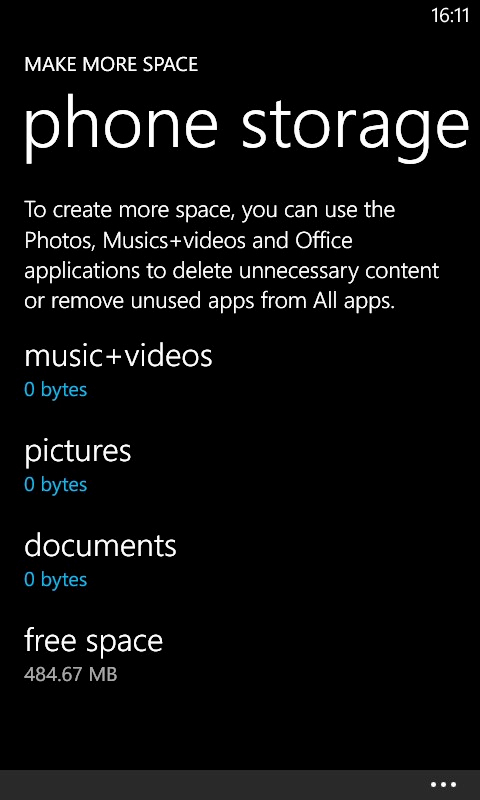 As you can tell, storage is a big issue on the HTC 8S. The HTC 8S is built to a price, and can only appeal to a certain user - and that user better not be partial to third party apps. The limited storage on the 8S leaves little room for additional applications. Yes, the smart user is going to make sure they have a decent sized microSD card to store their music, pictures, and videos... but with no option to store applications (or the application's data) the 8S is seriously lacking in software expansion capability.

What will last longer, a two year mobile phone contract, or that single gigabyte of storage space?

4GB of storage was just about usable on Windows Phone 7.x (the Omnia M, for example, reports 2.5GB of storage out the box), but I've used up half the available space on the 8S in less than a week after downloading just four applications. With a perceived need for Twitter and Facebook (even though they are available in the People hub), a few Xbox Live titles, and a local copy of mapping data for Scotland, the 8S has a grand total of 480MB space left on the internal storage.

8GB plus a microSD card is the way forward for the lower specced Windows Phone 8 phones in my opinion. 4GB simply does not cut it.

The other area of concern I have is an interesting one, and that's processor speed. For moving around the regular user interface and working with the first party applications, the 1GHz dual core processor handles everything with a decent amount of clip. But I've found a number of third party applications have the occasional stutter and pause while some heavy lifting is done in the circuitry of the handset. Put the system under some serious work (such as Flying Dev Studio's flight simulator Infinite Flight) and the jumps in frame rate and the momentary loss of smooth control are clear to see.

If users stay with the installed apps and don't use the Windows Phone Store, if they stay away from processor intensive code, if they get a decent sized MicroSD card for their own media storage, if they don't demand too much from their new smartphone, then maybe the HTC 8S is the phone for them.

This is a little heartbreaking, because the styling and feel of the 8S appeals to me. It's light enough to be discrete, it feels good in the hand, and while it is the same shape as the flagship 8X, the smaller size of the 8S means everything is within reach and comfortable in my hand.

But the look of the 8S is not enough for me to get over the operational issues. The 8S is not a good fit for my lifestyle. While there are clear use cases for the 8S (and I can think of a few people in my family that would get by easily with the 8S) it feels like a missed opportunity. It's going to fall seriously short with anyone who is looking to really push the Windows Phone 8 platform.

Disclosure: This review HTC 8S was loaned by Phones 4u. Phones 4u stocks a number of Windows Phone devices and other smartphones, including the HTC 8S (and 8X), in both its retail and online stores.