We saw in the detailed review of the Nokia Lumia 1020's stills capture that it was very capable, with the highlight being the maximum detail, even when zoomed in on a subject, either in real time or 'reframing' later using the dual capture system. One other essential component of the camera system on this smartphone is the OIS (Optical Image Stabilisation) which is full 3-axis-aware and which helps keeps zoomed photos super-steady. Unsurprisingly, OIS is even more useful when shooting video, as you'll see below, along with more zoom tricks enabled by the super high resolution sensor.

It was only a few years ago (literally) that phone video capture made the jump to 720p and the world marvelled. A year on and 1080p is the de facto standard, with the Lumia 1020 not disappointing in this regard. It's true that there are less unique features here when shooting video than when shooting stills, but what there is, is stunning.

First and foremost, there's the OIS, famously implemented on the Lumia 1020 with a ball-bearing and actuator system but seemingly just as effective as on the smaller camera units in the Lumia 920 and 925. When shooting video as-is, the OIS only makes a slight difference (depending partly on how steady your hand is normally) but when shooting video zoomed in, the difference OIS makes is vast. Just look at the second video embedded below to see this first hand.

Secondly, there's the PureView zoom, i.e. using the huge native resolution of the sensor to allow users to zoom in by up to 4x even in 1080p mode and still be shooting video that maps 1:1 with sensor pixels. 4x doesn't sound that much, but look at the video examples below again to see how dramatic the difference can be. Compared to optical zoom in a camcorder, this 4x PureView zoom pales a little, but it's demonstrably better than video zoom on almost every other 2013 smartphone. (The main exception is the pseudo-camera-hybrid Samsung Galaxy S4 Zoom, which achieves 10x by virtue of a huge, bulky and relatively fragile telescopic optical system. In contrast, remember the Lumia 1020 accomplishes its zoom with no moving parts outside of the internal OIS and focussing optics.) 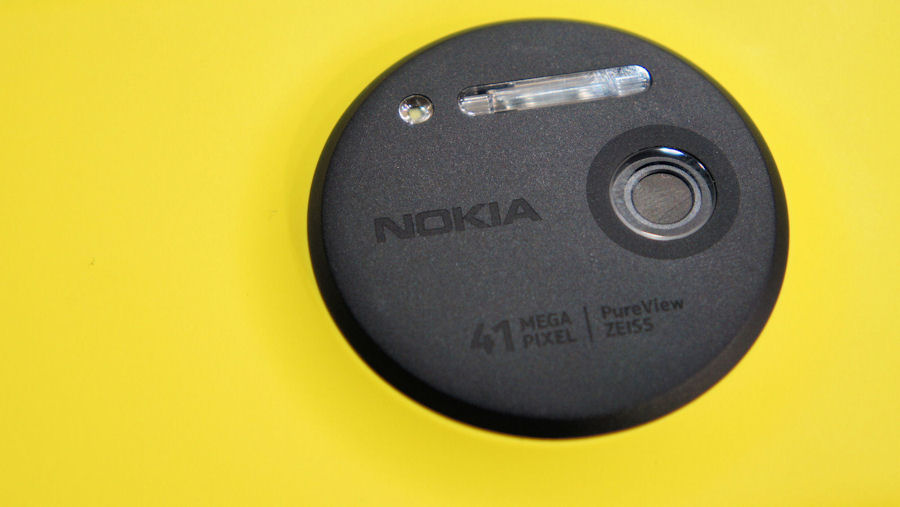 Thirdly, there's stereo audio with the same HAAC microphones and Rich Recording system as on many other Nokia smartphones of recent times. You can hear the lack of distortion and the general quality in the rock gig section of the sample footage below.

Most of all, it's the combination of all three factors which make video capture so good on the Lumia 1020. Being able to zoom in by 4x while shooting and have the resulting footage rock steady is mind blowing, considering this is on a phone.

The same comments apply to video as to stills, with regard to Nokia's choice of colour handling. Bright colours are again a little over-saturated, though at least most of your footage will seem less dull than it might be otherwise! As with stills, there's every possibility that Nokia will tweak the video capture processing algorithms in a firmware update to perhaps tone down the saturation a little. Watch the videos below and make up your own mind.

Here's the first video - sample 1080p video footage (passed through YouTube's re-encoding system, but hey, you'll get the idea of quality). As usual, if your system's fast enough then maximise the window and up the quality to full 1080p for best effect:

I was quite impressed by the results above - the over-green, saturated woodland near the end of the clip was a little much, plus the digital noise in the video image when zoomed into the gig section was evident, but hey, considering what I was asking the Lumia 1020's video camera to accomplish, I was happy enough.

Of course, it's almost impossible to really judge video capture unless you have a benchmark device, something to test it against. I needed a traditional phone camera shooting 1080p - so no PureView zoom, no OIS, no huge sensor, yet with 2013 smarts (intelligent digital zoom, software stabilisation) in place. I picked the Blackberry Q10 which I happened to have to hand and which has a surprisingly good video camera (the same unit as on the Z10, by the way) and similar in performance and 'smarts' to the Samsung Galaxy S III and S4, plus the iPhone 4S and 5.

With these comparisons in mind, I mounted the phones in my custom jig and set out for some tests around the neighbourhood. Again, bear in mind that all of this is after YouTube's encoding has done its work. As usual, maximise the window and up the playback quality, if you can! There's some commentary as I go in audio form, this time:

It's clear that the Lumia 1020's two main advantages, the OIS and the PureView zoom, do have an impact, since in every case above the 1020's footage was more pleasant to look at and more detailed when needed.

Now, three or more years ago, digital zoom was a no-no on phone cameras, since zoom was implemented by simply cropping into the sensor and blowing up the pixels. But now that most smartphones have 8MP or even 12MP sensors, each significantly larger than a 1080p video frame, there's enough detail here for up to around (and often a lot less than) 2.5x 'intelligent digital zoom', i.e. using the sensor much as the 1020 does, albeit with a bit less finesse. However, go beyond 2.5x (and there are rarely any limits set in other phone camera UIs) and you start losing information, as was clearly demonstrated above when I asked the 8MP sensor in the Q10 (otherwise a fairly decently rated camera unit) to go up to around 4x, to match the Lumia 1020.

Most competitors also now have software stabilisation of video images, but again (as I show above) this is no match for true OIS, especially not when it's implemented in all three axes and this reliably.

Finally, the 1020's third big advantage, the Rich Recording system and stereo HAAC microphones, wasn't tested here in the comparison montage, though that's something I'd like to try against a Galaxy S4 in September, when full retail European 1020s become available.

In Nokia Pro Camera, the (default) application used throughout this review, there's not much to fiddle with in video capture mode, at least compared to shooting stills: 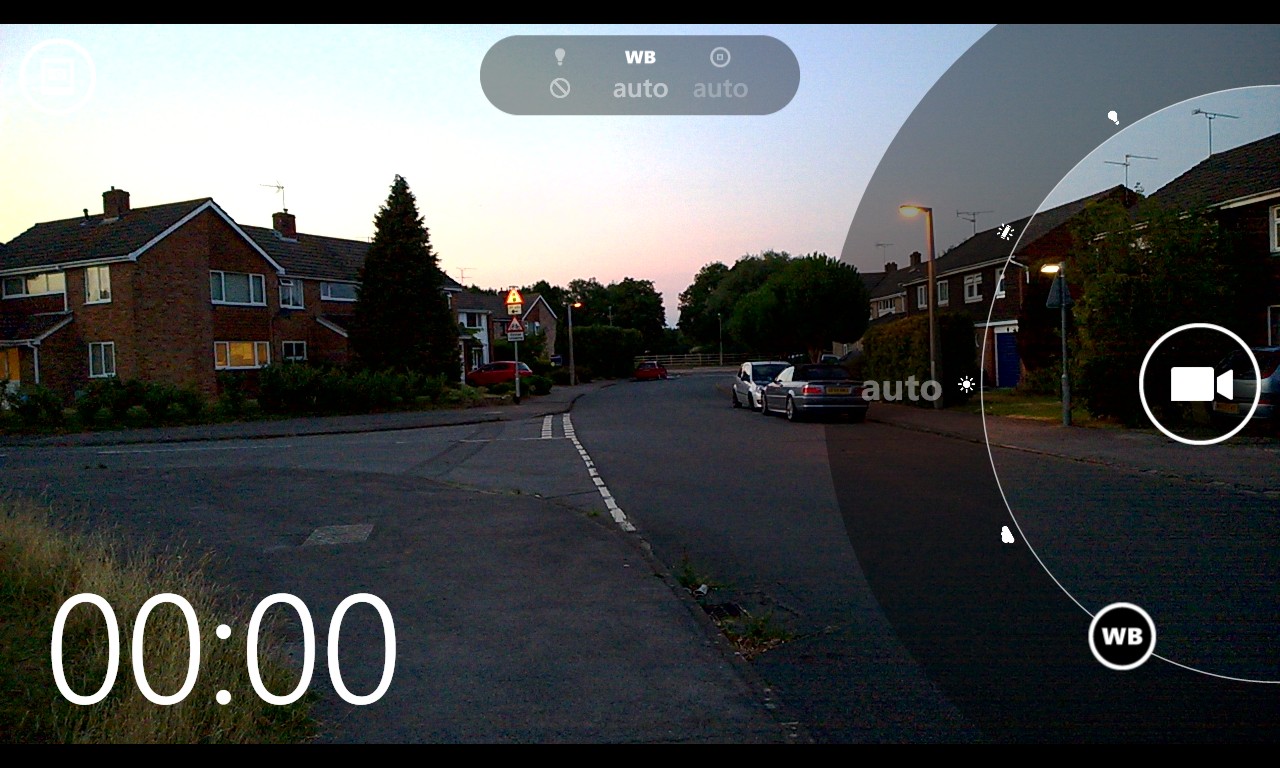 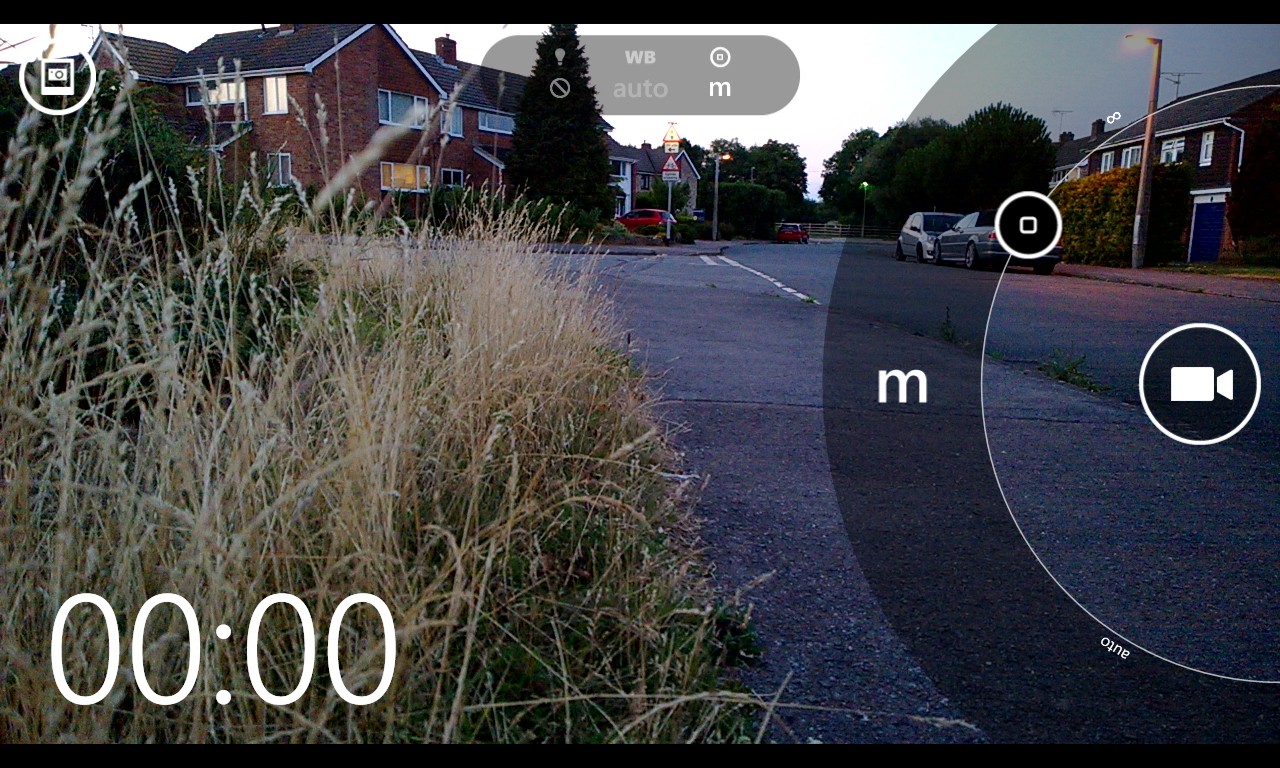 On the Windows Phone menu (...), there's the chance to drop down to 720p (shown below) if you prefer (giving 6x lossless zoom, which could be a great combination with the OIS, though not, curiously, further than 6x - I'd have expected 360p or 480p capture, for shooting and sharing when bandwidth is scarce). I guess Nokia doesn't want to degrade the high resolution output from the good sensor here too much? Also on the menu here is 'Audio bass filter', set by default at '100Hz'. Again, this is something that needs more intense testing in a rock music situation in a future article, as and when we have more time with the Lumia 1020, but essentially what you get is more flexible audio recording. 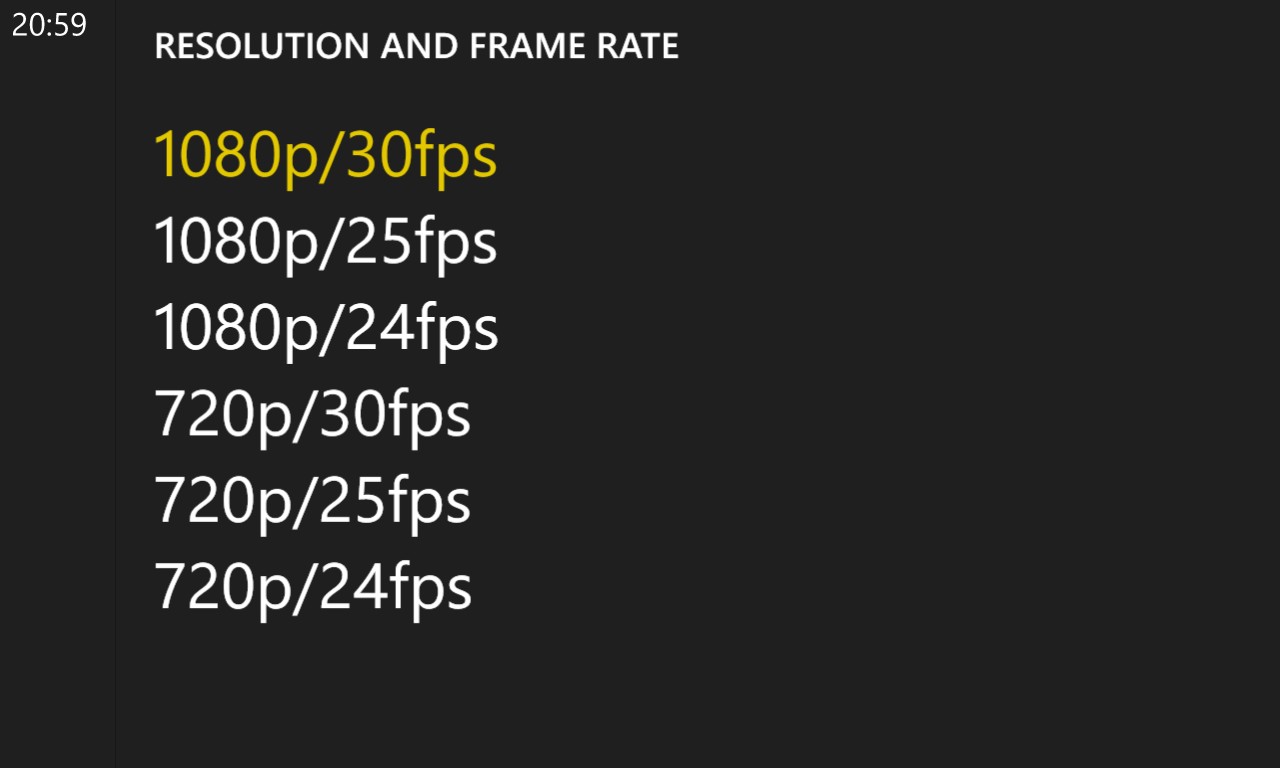 Added or updated in the last week to the Windows Phone Store are Nokia Video Upload (to YouTube only, currently, though the name change probably indicates that other video hosts will be supported) and Nokia Video Trimmer (as it sounds, pick something from Photos and drag the ends in to 'trim' it). Both of these have rudimentary integration with video capture, in that it they're offered (for launching) when you bring up a captured video in Photos and choose either 'Share' or 'Edit' on the menu. It would be handy to go straight to either with one tap from Nokia Pro Camera, but I'm guessing that Windows Phone's own limitations get in the way here. 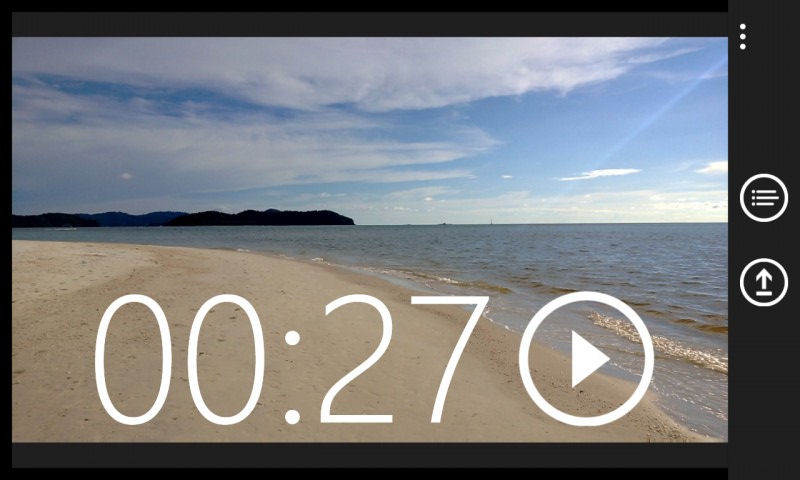 Talking of Windows Phone, there's also the option to record video with the standard 'Camera' application, but I wouldn't recommend it. You don't get as reliable auto-focus (from my own tests) and you're reliant on the default Windows Phone digital zoom, which works much like that on the Q10 (et al) and which lets you multi-touch zoom way beyond the point at which you start losing detail. Plus you don't get the option of manual focus. It wouldn't be a total disaster if you hit 'Camera' by mistake and ended up shooting footage with it, but you'll get more control in every way by shooting with Nokia Pro Camera, as the manufacturer recommends.

This is going to sound somewhat gushing, but the combination of large sensor/optics, OIS, PureView zoom and stereo HAAC audio, plus an incredibly visible display in all light conditions (thanks mainly to Nokia's CBD technology), allied with a very sleek form factor that isn't compromised at all by its camera/camcorder functionality, makes the Nokia Lumia 1020 the best phone in the world for video capture - by some margin*, in my opinion.

In fact, for casual family and friends footage it's pretty perfect (with that Xenon flash for indoor snaps, in between videos!), plus there's just enough flexibility in the manual focussing system to allow creative types to start filming insects, landscapes or anything else that the auto-focus system might get confused at.

If there's one highlight in the Nokia Lumia 1020's portfolio, I'd argue strongly that it was its video capture, a quality feature that can be used by just about anybody. As with stills capture, there's a slight worry over storage space, should you shoot a lot of video over months of use, but there are management features in the Windows and Mac desktop utilities that can hopefully help users keep enough of their allotted 32GB free.

Next, we'll continue our Lumia 1020 review coverage with discussion of its other features and applications.

* For those wondering about the 1020's older PureView sister device on Symbian, the now unavailable Nokia 808, here's a direct comparison between these two.