I don't think I've ever had to review an accessory that's so well built, so effective and yet.... so inelegant. This is Mugen's extended battery solution for the Nokia Lumia 920 - you'll recognise the company's name from a hundred other (equally bulbous) extended batteries for a hundred other phones over the years. However, what makes the '3000mAh Battery Case' so inelegant isn't the heft or thicker lines, unusually. And it's not exactly Mugen's fault. Nor is it, surprisingly, a complete showstopper, as I'll explain.

You see, it's important to work out where this particular Mugen accessory fits in the accessory world. The traditional Mugen 'extended battery' involves an oversized replacement battery and a replacement back (e.g. this, for the Nokia 808). The end result is bulbous, yes, but gives the phone an innately much higher battery capacity and the accessory is designed to be used in place, all the time, obviously.

The Lumia 920 (as with many modern phone designs) doesn't have a replaceable battery or removeable back cover. It doesn't even have charging 'spots', as used by Nokia's Qi charging covers for the Lumia 925 and 1020. The 920 is - simply - sealed. The only way in to the power system is via the microUSB port.

Which gave Mugen's designers two options. One would be to have an in-situ shell that extended significantly beyond the bottom of the 920, into which the 920 was inserted, vertically, in much the same way as the Lumia 1020 is inserted into its Camera Grip. The obvious drawback here was a taller form factor, on top of an already large phone.

The second option seems at first like the kludge of the century, but bear with me, since it's not as crazy as it looks. What we have here is a 3000mAh rechargeable battery mounted in a sleek, form fitting case that wraps around the curves of the Lumia 920 (though not right around - there's no screen protection). Power input to the Mugen cell is via its own microUSB port, as seen here: 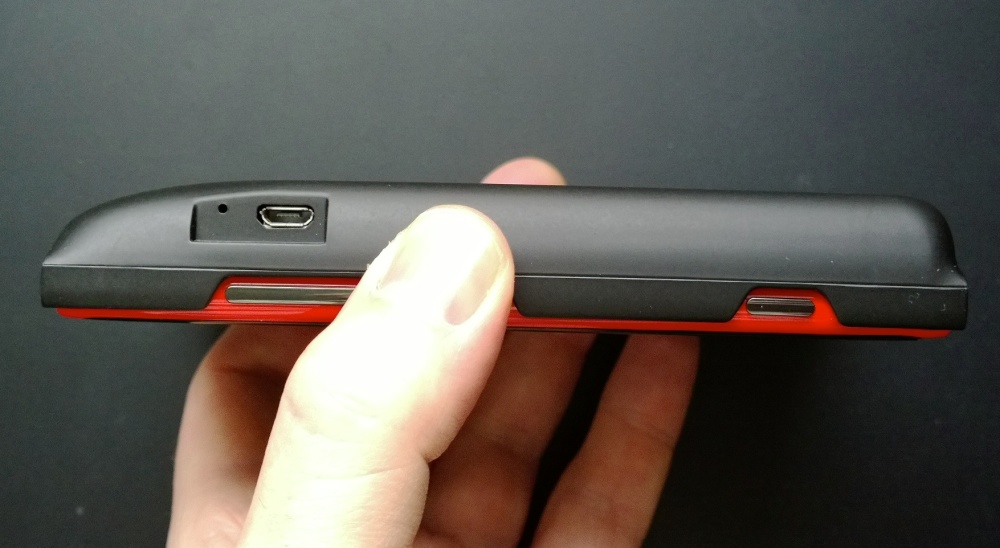 At which point you'll be wondering how the battery charge gets from the extended cell to the Lumia 920's microUSB port.

The answer - wait for it - is via a spring-loaded (retractable) flying lead that comes from a recess at the bottom left of the accessory. You fish out the jack, reach it round the couple of centimetres to the microUSB socket on the phone and plug it in: 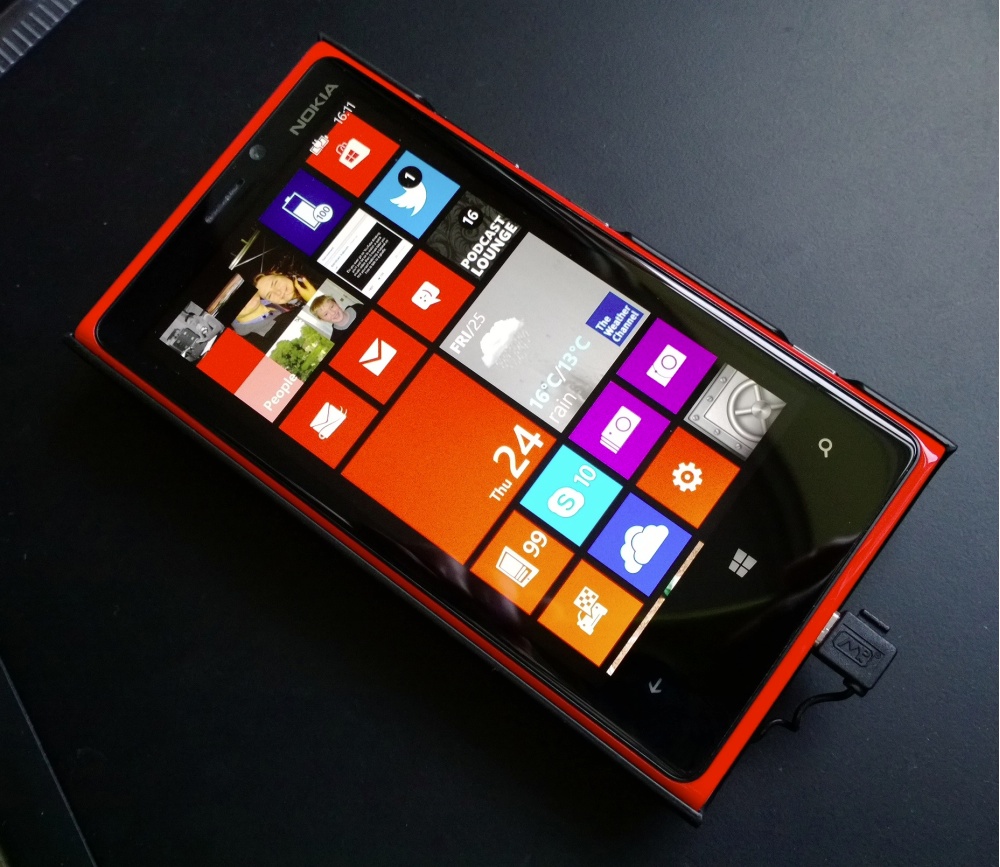 As I say, on an engineering level, this is a huge kludge, and very inelegant. Partly because of how messy it looks, partly because of the risk of breakage to the very spindly charging wire every time the plug is fished out and then put back later, and partly because the jack plug doesn't go back neatly - on the review sample, the jack didn't click into place and so was always peeking out, ready to get caught on something.

But before I set this into context, here's a close-up of the jack, extended, in place and charging: 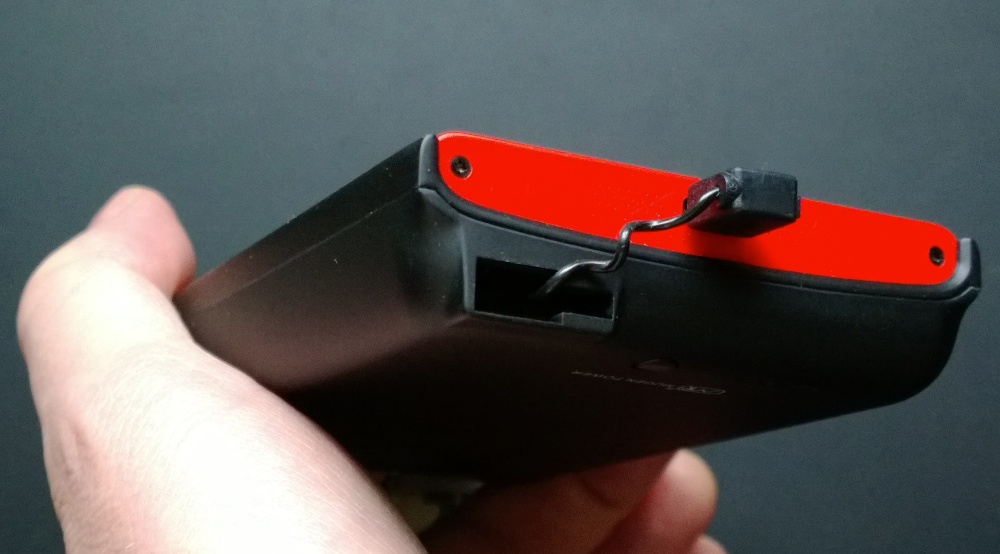 Before you run away screaming, however, consider the more traditional mobile charging solution that you (probably) already own. A portable charger from Anker or Proporta or even Nokia itself, the idea being that you keep it charged and then, when you need an emergency boost, you whip out the accessory, plug it in and then use the phone with the charger dangling. Or folded beneath. Or just getting in the way.

Now, stop thinking of the Mugen 3000mAh Battery Case as something that will live on the phone most of the time - it's certainly not that sort of accessory. Far from it - in fact, the battery is thick enough to block the Qi wireless charging built-into the Lumia 920, rather foiling one of the Lumia's unique selling points. Think of the Mugen accessory in exactly the same light as the other emergency chargers just mentioned, complete with charging wire, yes. But in this case the charger fits perfectly onto the phone and doesn't dangle or get in the way.

So, typically, you'd be running low on power on your 920 in the early evening on the train, you'd reach over to your briefcase and pull out this black monster, clip it on and plug it in. Done. 3000mAh at your beck and call, easily enough to recharge the Lumia 920 fully, if necessary.

The downside, of course, is that, although it will - technically - work with any phone, it's only sculpted for the Lumia 920. So if you change the phone, you've lost a large part of the convenience.

I say 'convenience', but the Mugen battery case loses points here by being too well sculpted to the 920.... Once on, it's very hard to get off again - I had to use a screwdriver to lever the two bits apart! Hopefully the plastic clip sections would become looser with use and age.

So there is a use case for this accessory, albeit one which comes with several caveats. However, much as I love what the Mugen folk do, there's a feeling nagging at the back of my mind that this case is an old-fashioned solution to a problem which has already been solved by new tech. After all, with the 920 having Qi wireless charging, why not use Qi to transfer power from the case to the phone instead of microUSB? In fact, make the charger itself fully wireless, able to be charged wirelessly, and you've got... the Nokia's DC-50.

Yes, a wired solution is more efficient, in terms of the fraction of the charge which can be transferred, and it's also potentially faster, but most people would still probably plump for Nokia's newer and more elegant solution here, I suspect.

For more information, or to buy, see Mugen's page for the 3000mAh Battery Case here. Comments welcome - what do you think of the design? 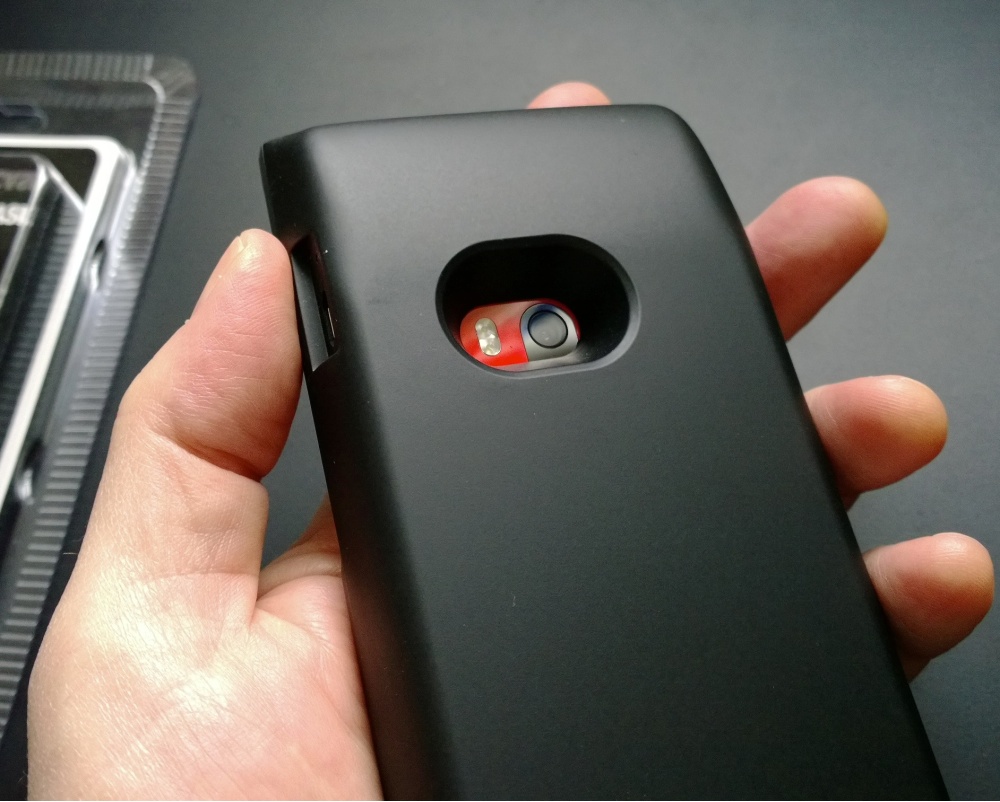