Solitaire has a long history with Microsoft, being present in almost all the desktop GUI's since a mouse was introduced, to help give basic training on clicking, dragging, dropping, and window management. It was included 'out of the box' in Windows Mobile, and looking back, it's unusual that it has taken so long to arrive on Windows Phone with Redmond's blessing.

When it did arrive last month, it was joined by Mahjong (reviewed here) and Minesweeper (reviewed here). All three of these titles, developed by Arkadium, share a common user interface and attributes.

It's an interface that is partially compromised on Windows Phone because it is ported from Windows 8. As one of the earliest sanctioned batch of apps from Microsoft that are 'multi-platform' in the Windows world, mistakes are going to be made. That said, Microsoft Solitaire Collection does not carry the same cross-platform baggage as the two previous titles. 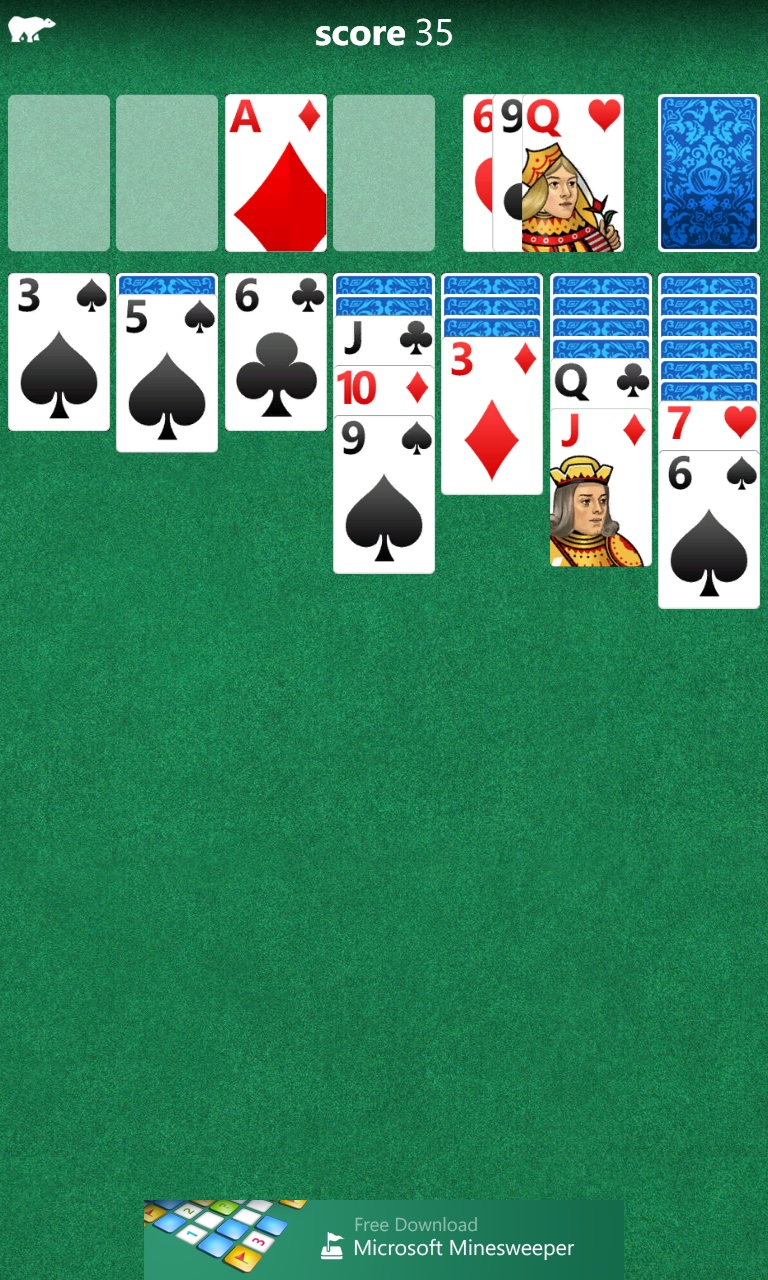 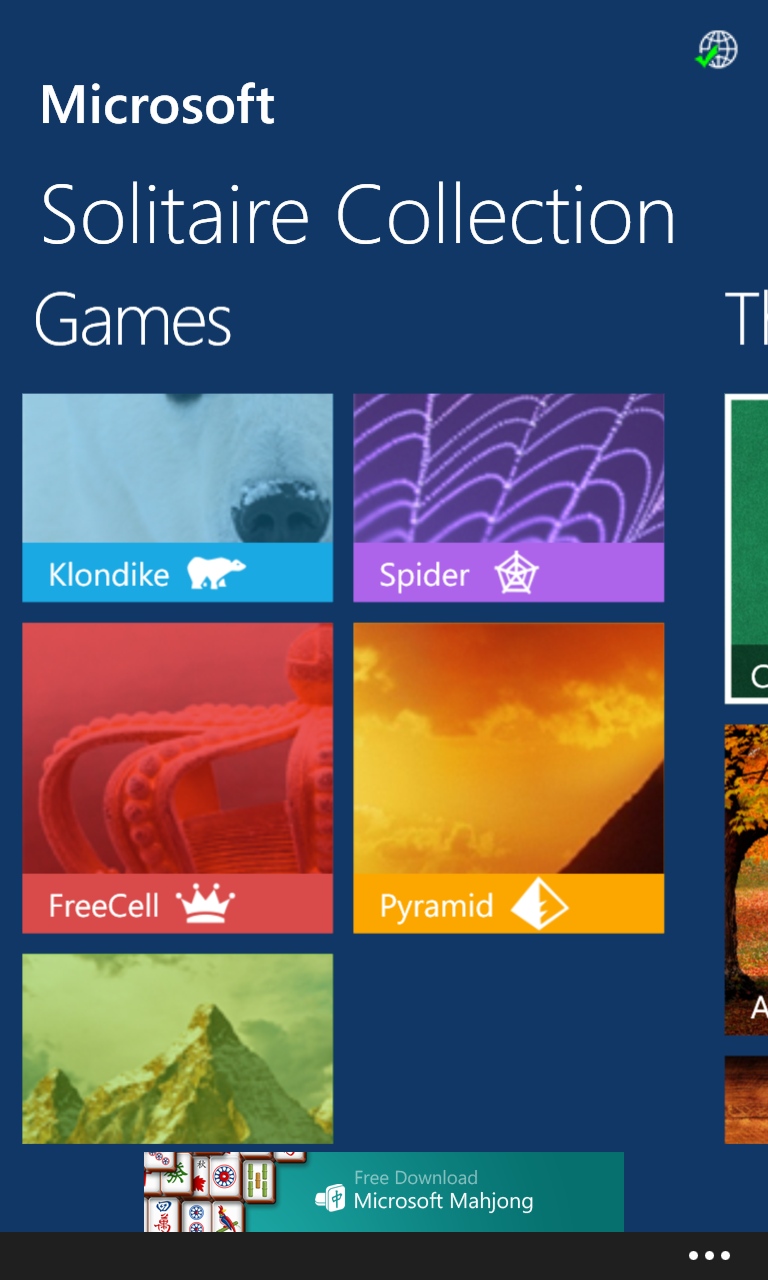 Thankfully, this game is not locked into landscape mode (in the way that the Mahjong title is forced to stay in a single orientation). While some games suit the portrait mode, with long sequences of cards running from the top to the bottom of the screen, others, such as FreeCell, work far better in landscape than portrait. The menu charms are hidden away, but a quick tap on a 'dead' part of the screen will see it return. From there the usual menu choices are available.

On with the collection. Five Solitaire games are included in this bundle, all of which will be familiar to the digital patience player. I suspect that most players will default to Klondike and FreeCell as their card games of choice. Klondike is the same game played countless times over where you alternate red and black descending numbers on the playing field, and have to find (and build up on) the four aces.

FreeCell again has the build on red and black principle, and find the aces, but limits you to four 'spaces' to move cards around in. Long time FreeCell players will recognise one component that has been brought over from the Win32 version, with the 'random seed number' that determines the dealing of the cards. This way you can return to a game to try again, or carry on a quest to solve a certain puzzle.

Because the game number in the Windows Phone version of FreeCell matches the game numbers in the original Windows Desktop version, there is a lot of help online, and also a number of sites that challenge you and your FreeCell skills. Congratulations to the developers on going the extra mile to make sure the game numbers match up. 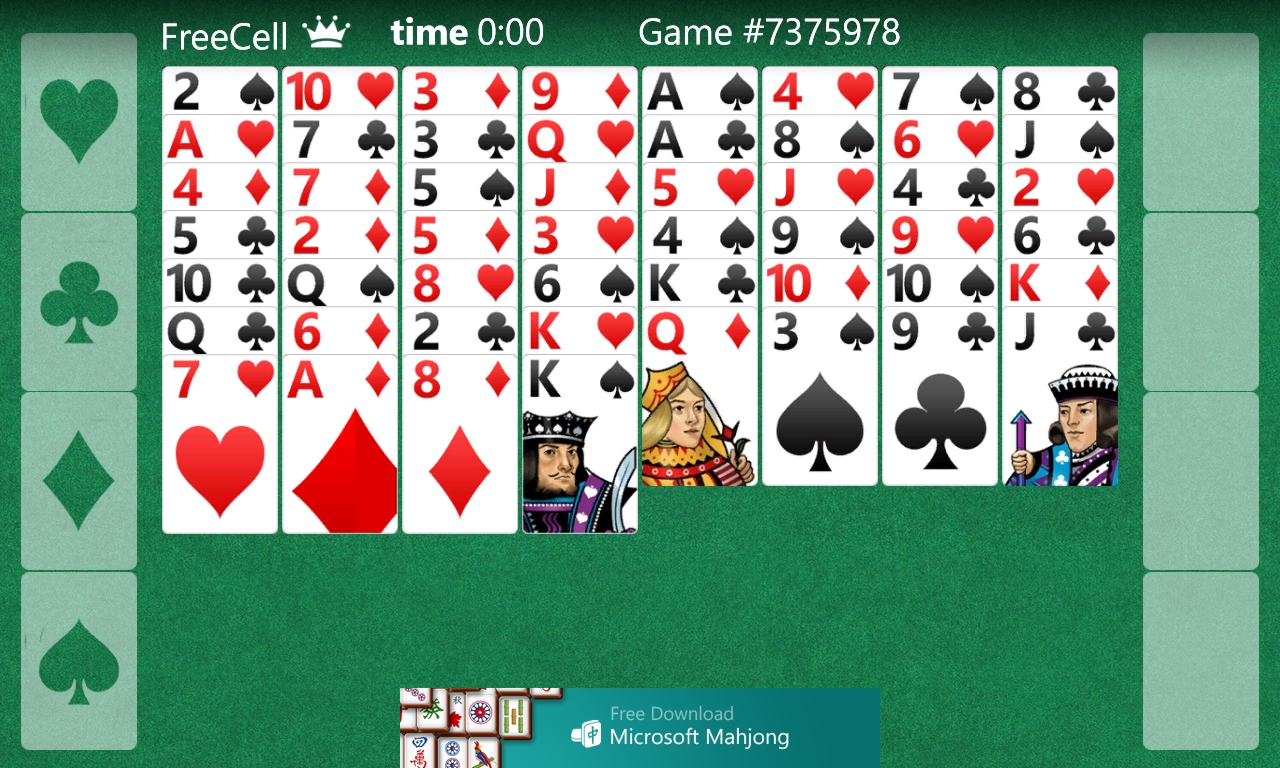 Spider asks you to build down in suit order, and is played with 104 cards (so eight suits to collect, rather than the standard four). The skill level you have selected will decide how many suits are in play - with all the cards as a single suit, 'spades' Spider is a relaxing diversion. Go for a full sweep of spades, hearts, diamonds, and clubs, and it's a bit trickier. This is probably the solitaire game that you can most tailor to your mood.

Tripeaks comes from the 'Homerun' school of solitaire games where you select the next discard card to be one higher or lower than the dealt card in view; while in Spider, here, you can remove pairs of cards if they add up to thirteen and are unblocked. A lot of people like these two styles of games, but they're a touch too reliant on random deals to prove the challenge. I much prefer the style of Freecell, where every initial deal is (just about) solvable.

The title also features colour themes, so you can choose the style of playing card and desktop used. Unfortunately you can't mix and match the card styles with differing  desktops.

Once you get your head around the rules of each game, playing them is really easy. A touchscreen interface always works well with a card game, so tap to turn over and select cards, dragging them around with your finger, it's all as you would expect.The only issue might be the accuracy you need in moving cards around between stacks - there's not a lot of a target when you are dragging with your finger, so the immediate undo option in the menu bar will come in useful, especially on smaller screened devices.

Solitaire Collection offers a number of ways to gauge your progress and success. Each card game (and the major variants within each game) comes with a leader board/high score table so you can see how well you are doing compared to your Xbox Live friends. This is only available when you are connected to the internet, and while it's a nice idea the sprawling nature of the UI and the variants of each game mean it feels very sparsely populated - Klondike alone has six different high score tables for the different versions of the game. 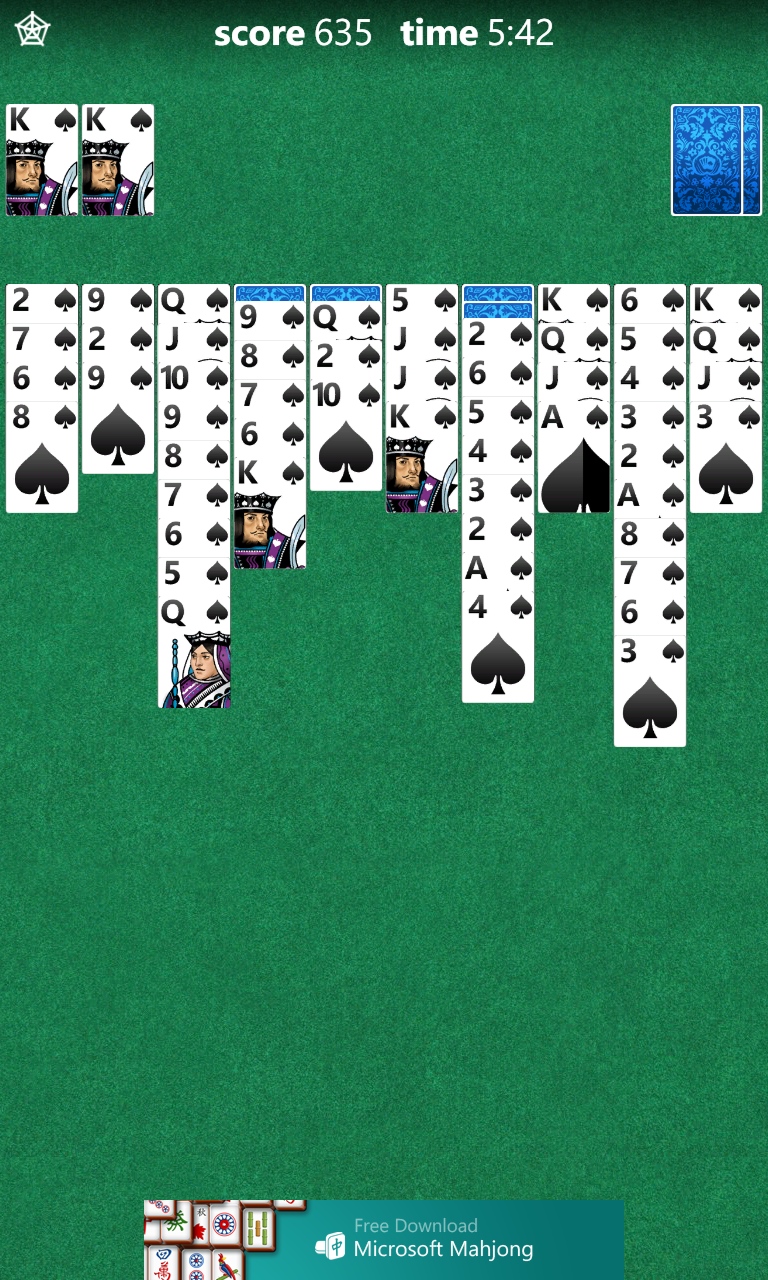 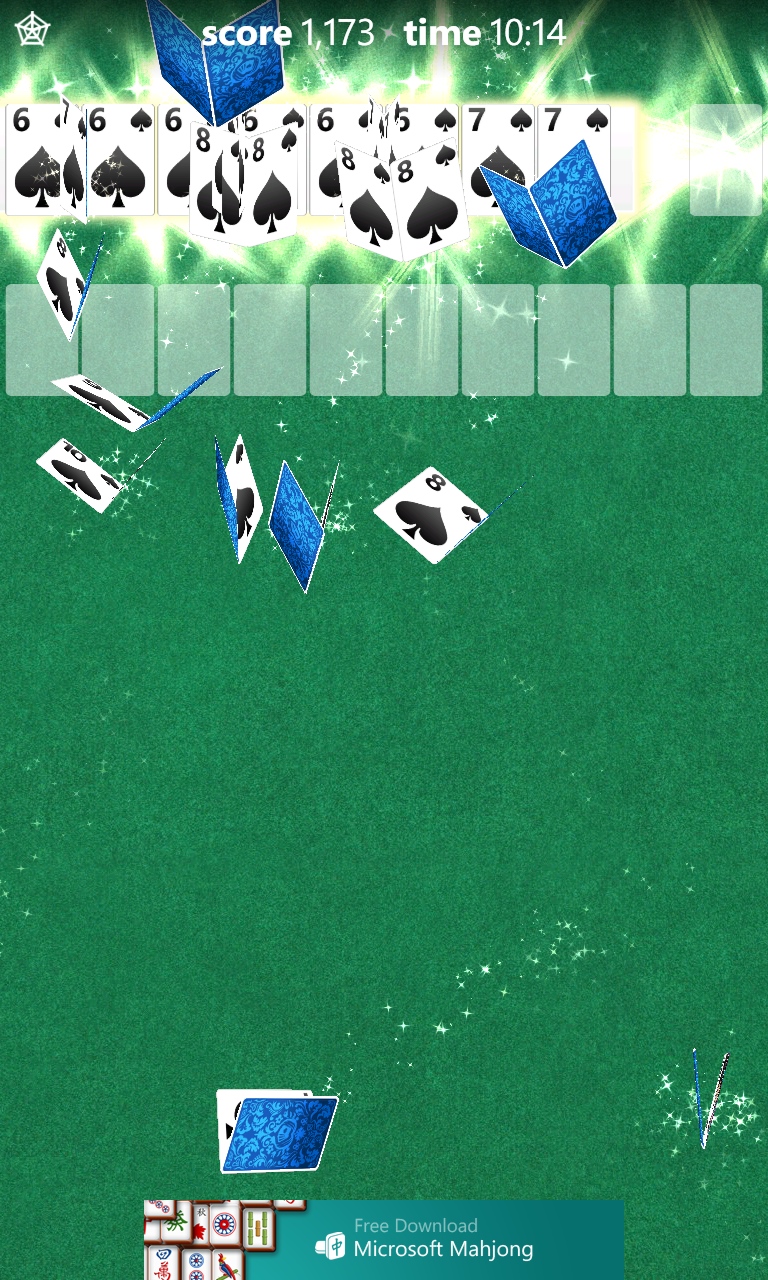 As an Xbox Live title, you have a number of achievements you can shoot for, which earn you gamer points. Generally these are endurance challenges ('win 100 solitaire games' being one that may take you some time) and force you to keep playing for an arbitrary goal - at least the leader boards have some competitive spirit to drive you towards competing.

Finally, you have medals you can earn, which feels remarkably like the Xbox Live Achievements system, but with a shiny graphic of a medal when you complete each task.  I'm not sure what good duplicating this style of ongoing challenge does to improve the game, other than clutter up the UI.

The online component of the game is not just for high score tables. - this is a cross-platform game, which means your progress and current game are stored in the cloud, so you can sync this over multiple Windows Phone handsets with ease, but also sync to the Windows 8 version of the game. You can start in the office desktop, move to the phone, and finish the same game on your Surface RT at home. It's a bit clunky with dialogs asking you to confirm which file is the correct one to use, but I'd rather the sync logic checked in when it's not 100% sure and not overwrite the progress of a really good deal. 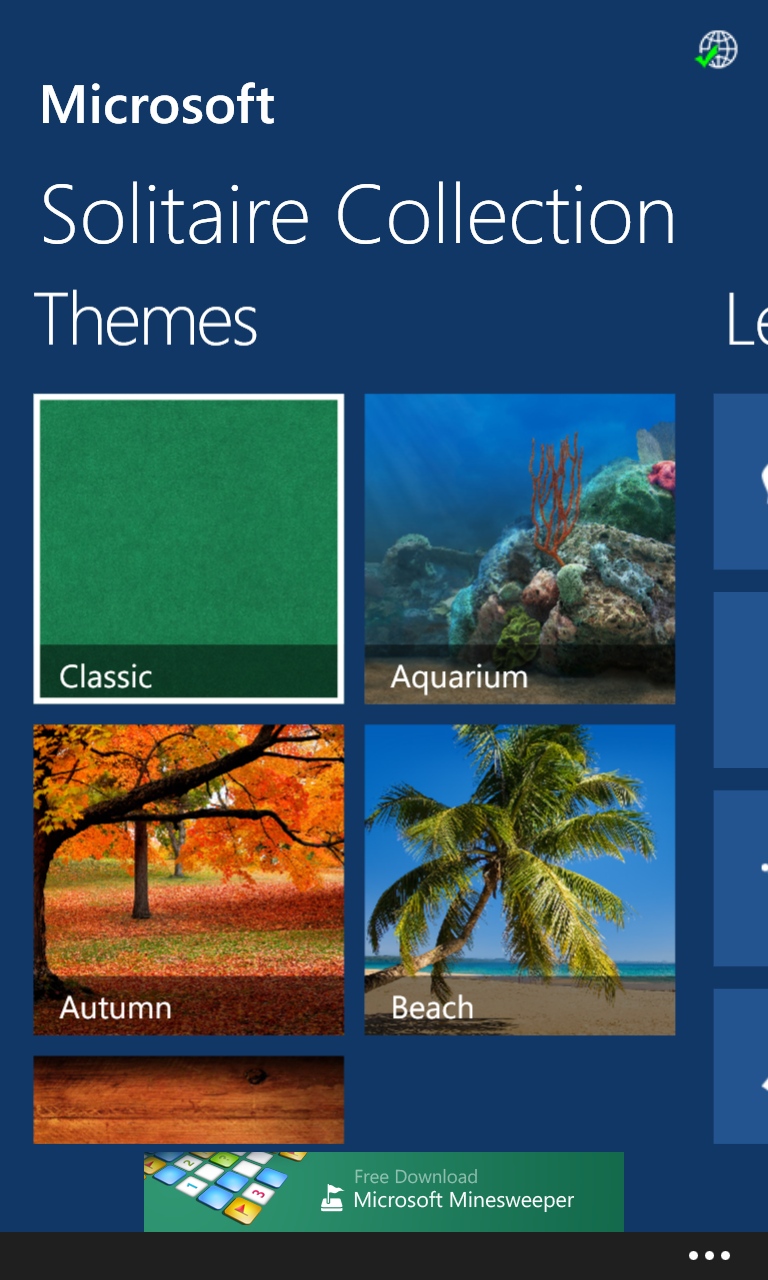 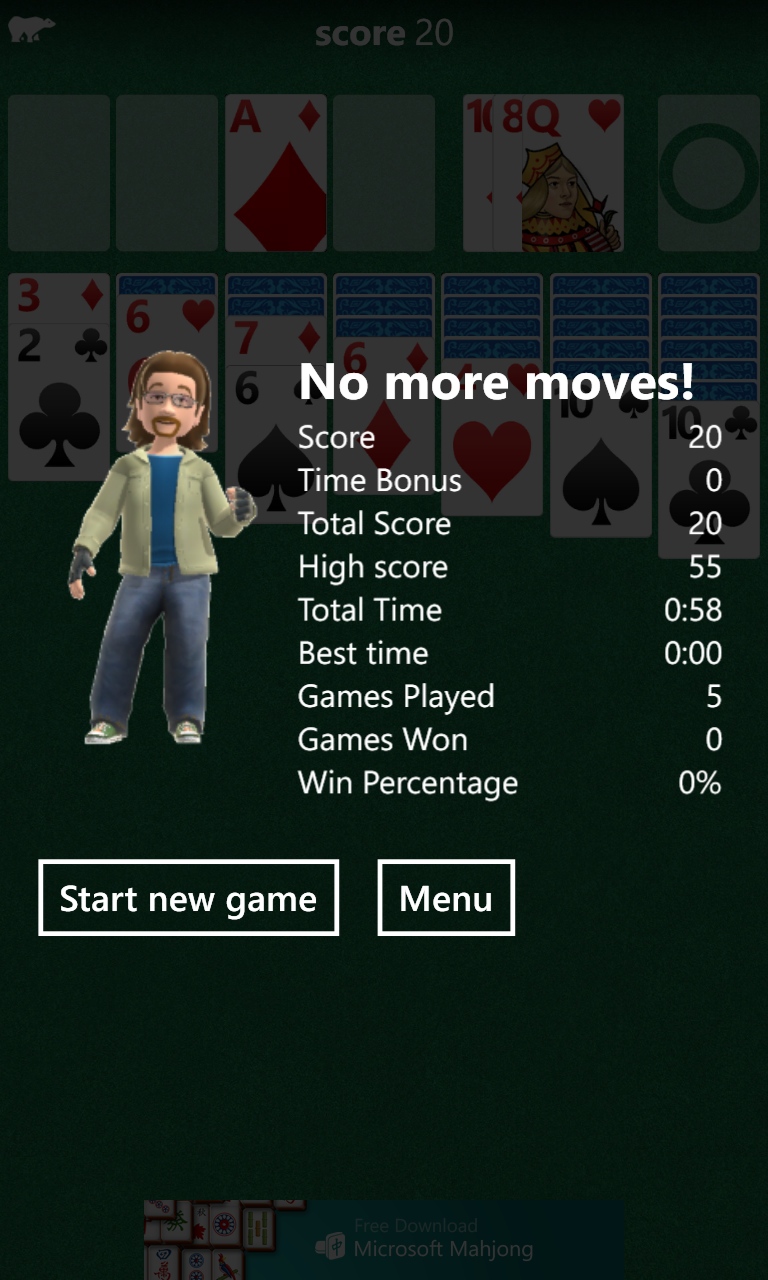 Microsoft's Solitaire Collection is a workmanlike solitaire game for Windows Phone - it will happily scratch the itch of a good solo card gamer. As it is an Xbox Live Title, and distributed by Microsoft, it's going to get a lot more downloads because of the positioning. Yes, it could be better, with more games, a slightly more interactive UI, and lose the in-app advertising that promotes the other Microsoft gaming titles, but there's nothing fundamentally wrong with the title either.

It does the job, it satisfies your urge for a solitaire game, and it's very much welcomed on Windows Phone.