You may remember that one of my core 'must haves' for any computing platform is a KeePass client, with all my private data kept these days in the Cloud but mirrored on every computing device I own. From passwords to social IDs to engine numbers to bank details, it's all there, standalone and perfectly encrypted. Yet the likes of '7Pass' on Windows Phone haven't really matured, so I've switched to MetroPass, offering full upload (if not sync) back to the Cloud.

Why not use 'LastPass' or similar, I hear you ask? Because this isn't fully available for Windows Phone, because it's Java-based elsewhere, but mainly because it's core USP is being able to insert complicated passwords into web sites for you. Now, this last sounds like a good idea, and can be for some people, but I prefer to have an encrypted database remember passwords for me and then I'll input them when the time comes. That way, the (usually semi-sensible, like "steveaccessfacebook76") passwords also get burned, or at least made familiar, into my memory, so that I've got a fighting chance of remembering many site passwords if I'm somewhere without my critical database. It's the same thing with speed dial on phones back in the 2000s, I never used the facility because I'd rather dial by hand - as a result of which I know quite a few of my family's phone numbers off my heart - handy for emergencies.

Yes, yes, I know it's old-school. But having a single master encrypted database of 'stuff', in which you can keep anything you like (i.e. not just passwords and PINs), accessible from the Cloud and mirrored everywhere, is just so darned flexible and useful. And has saved the day more times than I can count.

On Windows Phone I've had something of a journey with 7Pass, a client which started as a viewer only and which developed.... not very much. The project stalled completely, leaving me as a second class citizen on Windows Phone. Enter MetroPass, reviewed here, offering not only editing of KeePass 2.x files (there's an older v1.x standard that's not used as much anymore) but also re-uploading of the database to your 'master' location in the Cloud, e.g. in OneDrive (still called 'SkyDrive' here, quaintly) or Dropbox. (There's no Google Drive option, sadly, but OneDrive will arguably do just as well.) 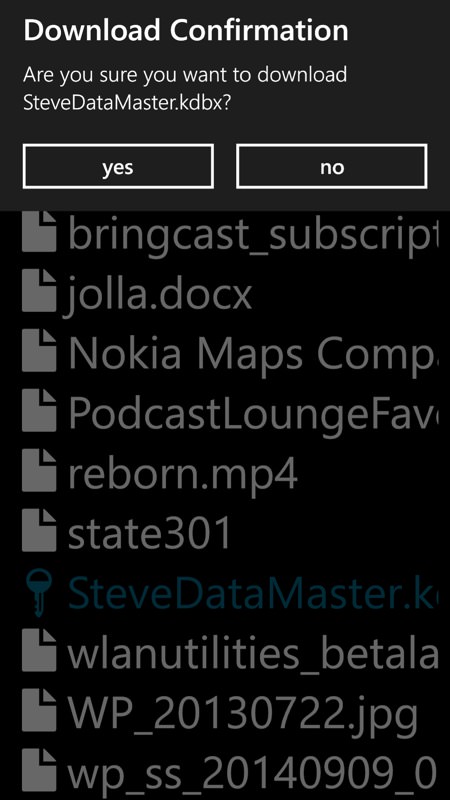 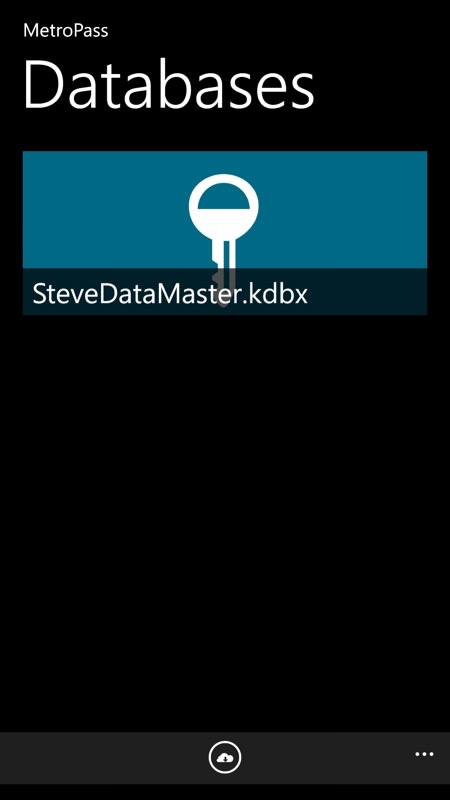 Grabbing my master KeePass database from OneDrive (SkyDrive); (right) safely downloaded and ready to be opened!

And it all works, though with a few quirks and omissions. MetroPass is very much in the 'keep it simple' camp, with not even a Settings dialog in sight. What you see is what you get - opening up your KeePass encrypted database and letting you browse through folders and entries. Tap to modify any as needed and then, when you're done, you can manually upload the changed database to replace your Cloud 'master'. Job done. 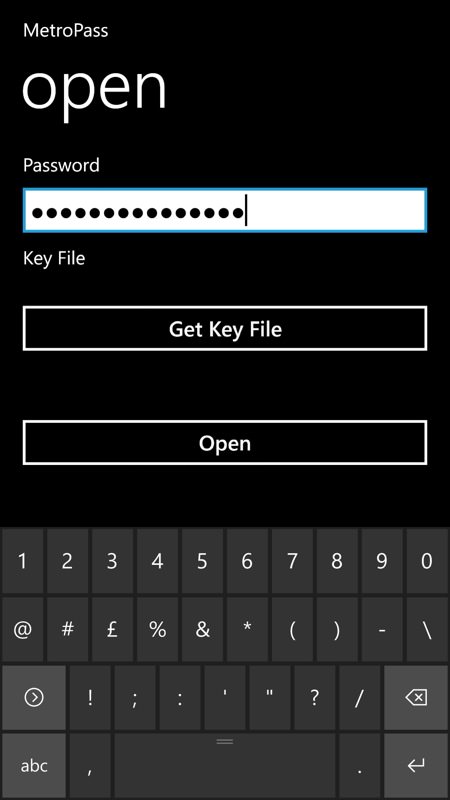 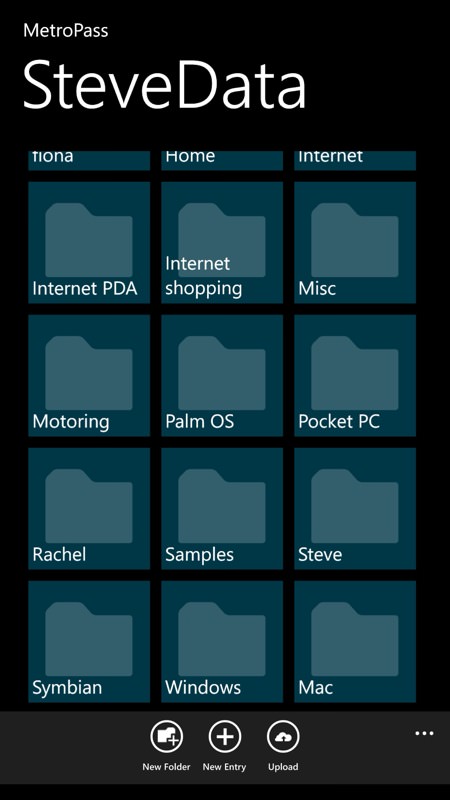 Entering my master password to open the database and (right) viewing folders within it...

So what's quirky and what's missing? For a start, after modifying a field in any entry, there's a 'Save' toolbar control, yet tapping this does nothing at all. It turns out that entries are saved automatically, as you go along, and that tapping on the 'back' control is all you need to do. Begging the question, what's the 'Save' control for? 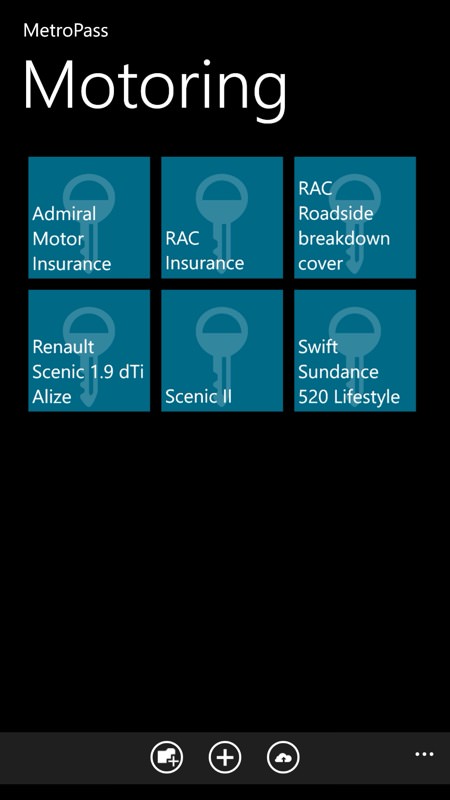 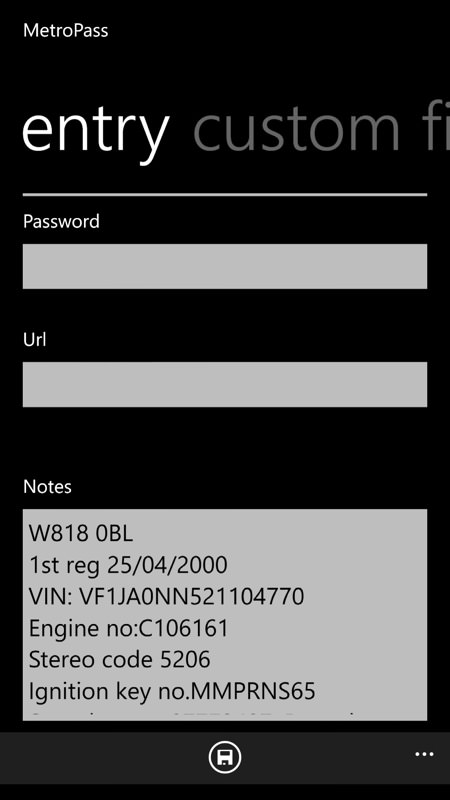 Entries within each folder are presented as cards, (right) tapping any will bring up editable fields (conforming to the KeePass 2.x standards). And don't worry about my personal car data - this one's now been scrapped!

Then there's MetroPass's following of the system theme - fine on AMOLED screens and dark themes, but a light theme renders the main folder and entry displays unreadable (you get black text on the dark turqoise squares). Clearly the developer has a Lumia 1020 or 925 or similar and was testing the app in an all 'dark' mode!

In addition, the one huge omission here is search - somewhat unbelievably, there's currently no way to search your KeePass database. So if you're not sure whether you stored your Internet banking details under 'Internet', 'Banking' or 'Steve' (or whatever) then you've a little browsing and swiping to do. Not a showstopper, of course, but inconvenient.

Not updated since the end of 2013, there's also a question mark over how committed the developer is - let's hope that this review kickstarts the project a little!

Roughly £1 in the UK, this is a commercial purchase, although a trivial one. If you're a KeePass user, why not buy it like I did and send a message to the developer that there's still interest?