Following on from my review of the Microsoft Lumia 950 XL and Lumia 950 in each of the review parts so far ('1' for each), and from my camera head to head with the older Lumia 930 and 1020, here's the second review part, common to both devices of course, since the camera units are identical, with just some back end processing differences that I note below. Summary? With just a few caveats, these are the best imaging smartphones to come out of the Nokia/Microsoft stable yet. 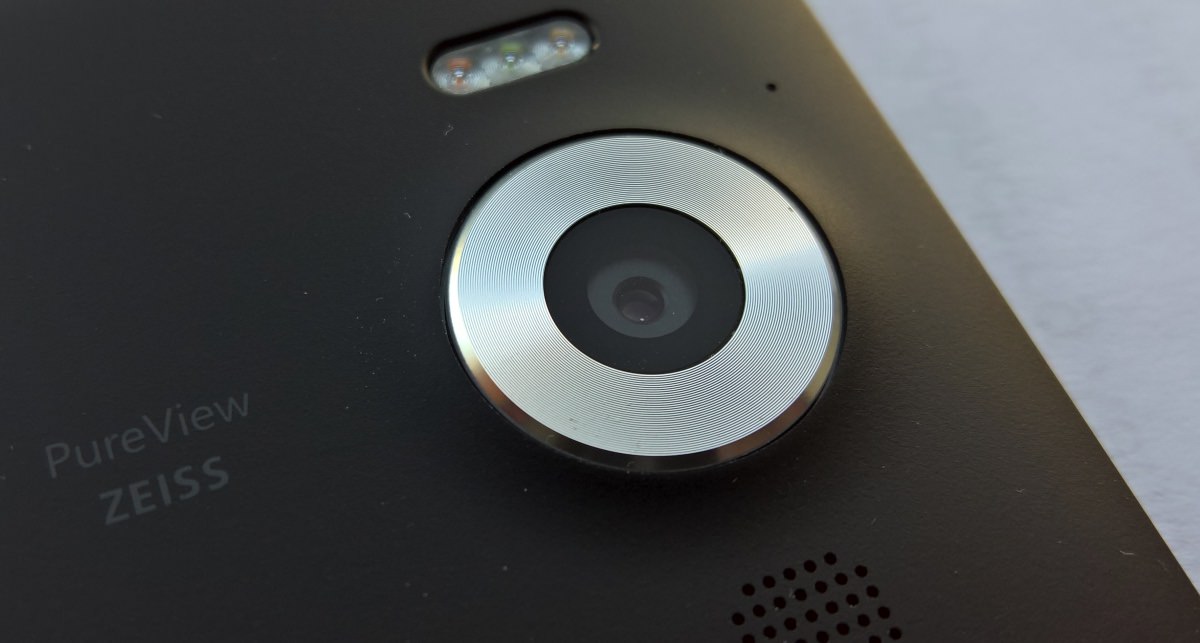 It's worth unpacking the raw specifications of the camera in the Lumia 950 and 950 XL: 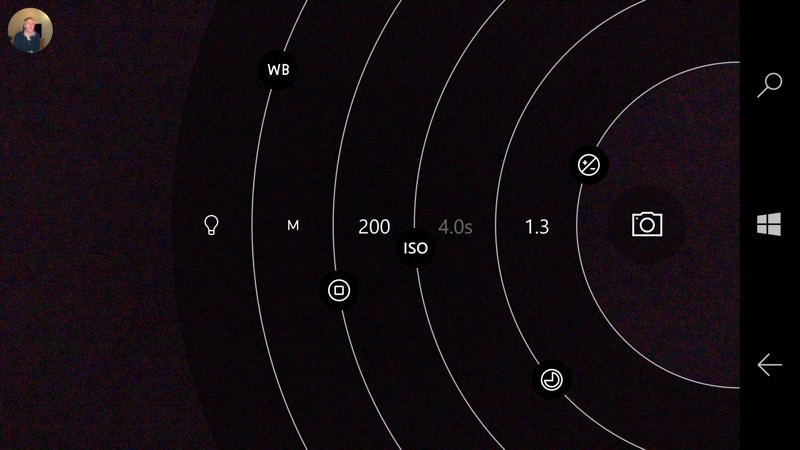 But on with some photo examples, with commentary. In each case, click through to open the image in a new window or to download it (according to your browser and preference). See what you think! 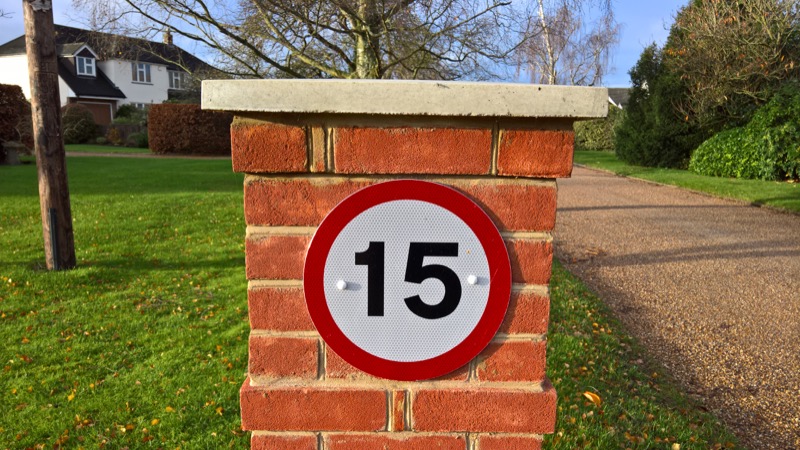 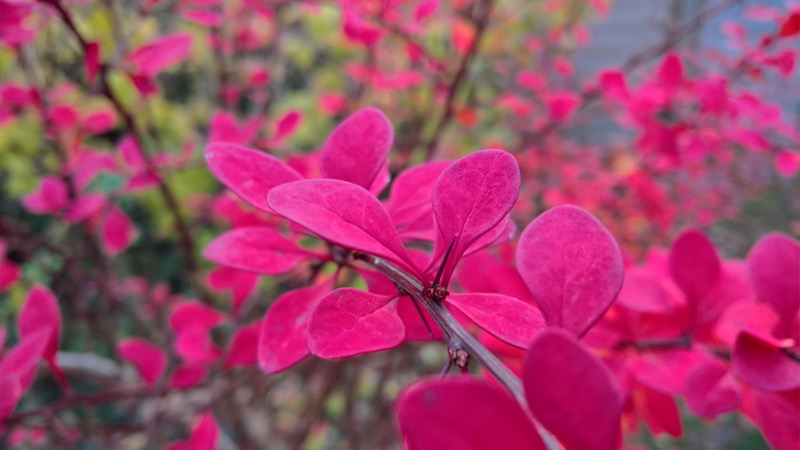 A 16MP macro of some delicate leaves, out in winter, and a shocking colour - this is accurate though - you should see my garden! 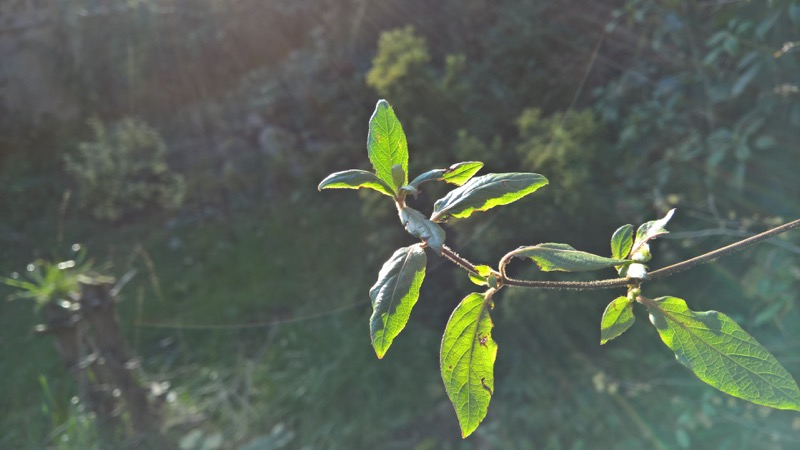 Another macro into tricky lighting (into the sun, see the rays/flare), this time 8MP oversampled, look at the focus and detail on the leaf stem etc. 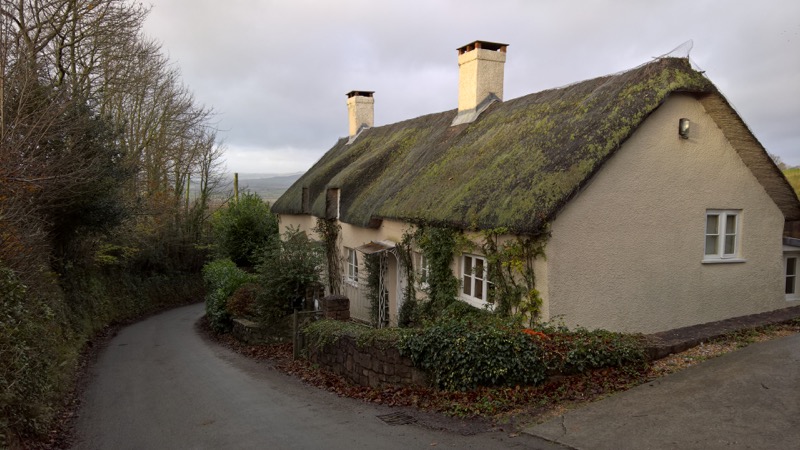 Under overcast skies and somewhat murky light, this oversampled 8MP shot of a Somerset cottage came up beautifully. 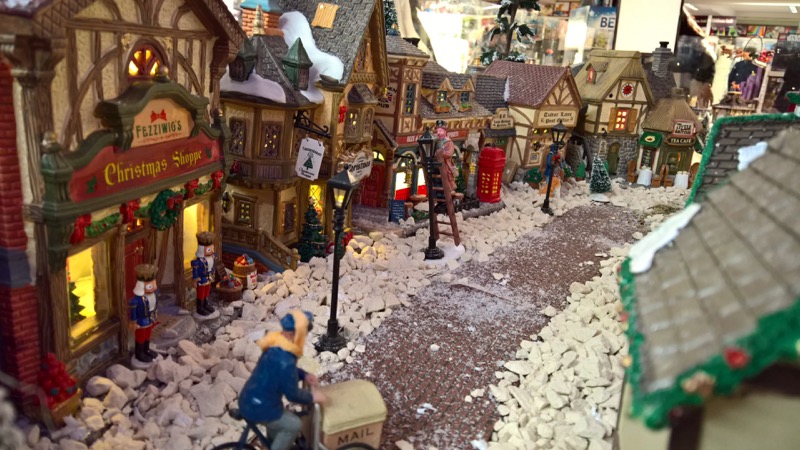 Indoors, at an event, an oversampled 8MP macro of a beautiful model scene... I was focussed on a spot in the centre of the frame, but other bokeh effects might have been interesting, of course. 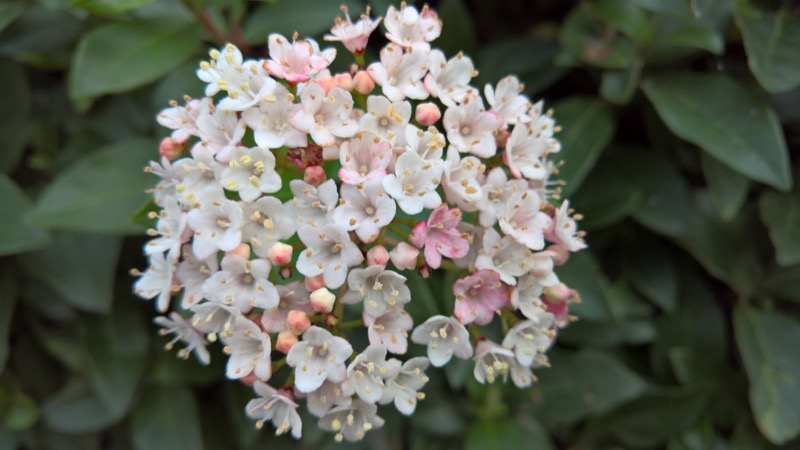 Away from the sun, in the shade, some delicate blossom, extreme macro, only around 3 inches away. Shot at 16MP. 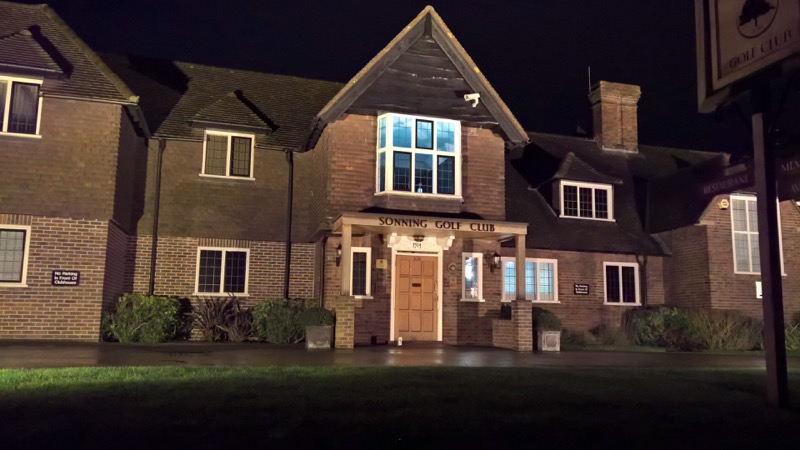 A floodlit building at night, shot at 8MP with oversampling. Focussing wasn't trivial, and the 950 needed several 'goes' at it. Pro tip: find the brightest spot in the viewfinder and tap on that! 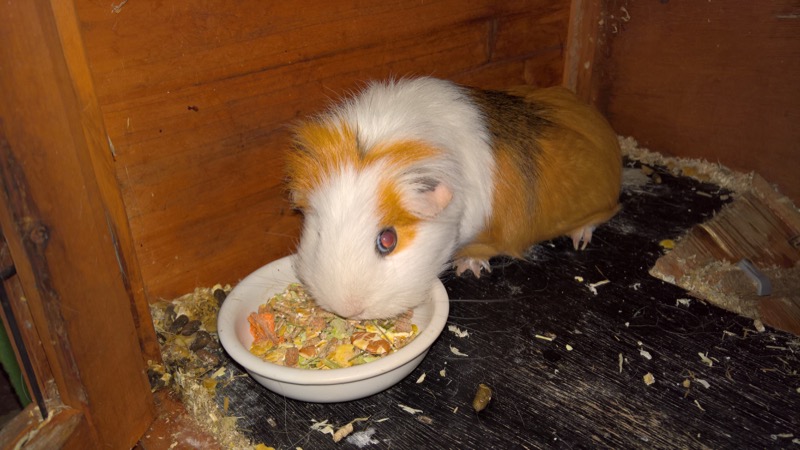 Shot at 16MP, this flash shot of our pet froze the animal's motion very well.... 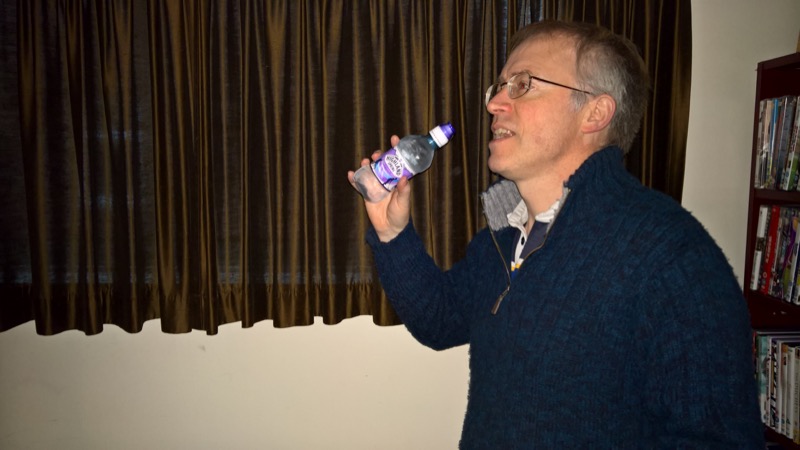 Another triple LED flash test - the Lumia 950/XL does surprisingly well in these circumstances. I don't believe the EXIF data, I think that's made up from blended/bracketed Dynamic Flash shots - the photo used looks like it was captured quickly, though this was the best of half a dozen test shots like this (taken since), so maybe the 950 got a little lucky here in terms of catching me mid-movement. All the shots were 'OK', but don't expect true Xenon (proper) flash freezing of motion. I'll come back to this in a flash comparison with the Lumia 1020 in the future. 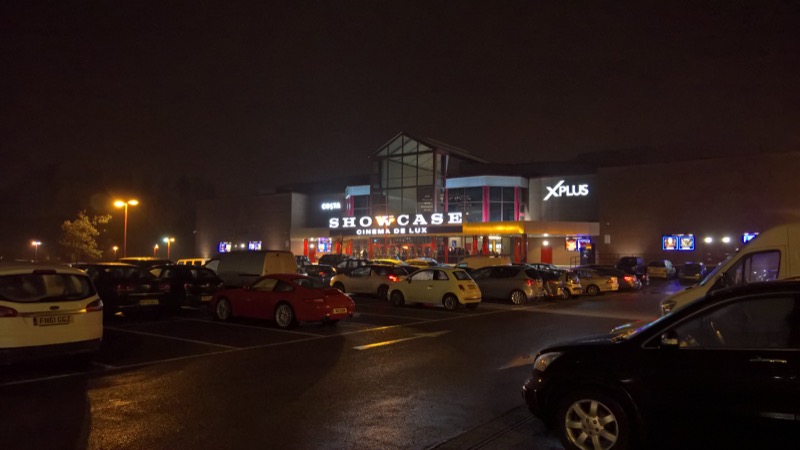 A top notch night time shot. Just perfect exposure and amazing detail - crop in on the centre of the 16MP frame and you'll see. 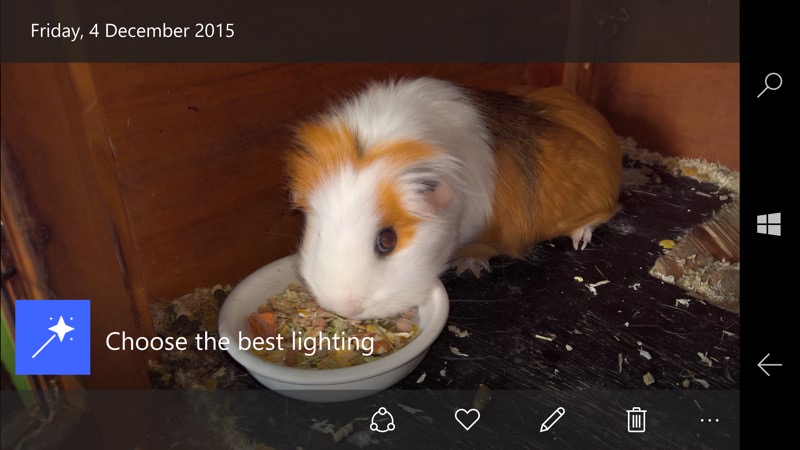 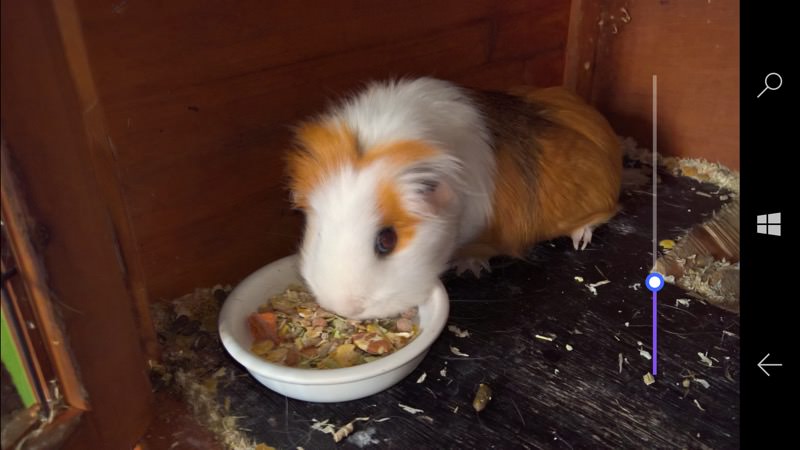 Sliding the control up and down adjusts the blend between the different exposures/flash as needed...

Either a stroke of genius or the bane of the Lumia 950/XL's life, every photo taken on the device, even if Rich Capture is disabled, is subject to some post-processing. There are some clever algorithms at work and the end result is almost always worth it, but it does seem as if the main Snapdragon processor is used for all this rather than the powerful GPU that's also on board. (If so, this could be fixed in a software update, of course.) The upshot of the processing in terms of the user experience is:

Although the Lumia 950 and 950 XL cameras are identical, there's one slight difference of note and that's in the processing time for Rich Capture. It's slight but measurable - when rendering a sunny HDR shot, the Lumia 950 XL finishes in around eight seconds, while the Lumia 950 takes ten. So about a 20% increase in performance in going for the faster phone chipset. But, as I say, this all usually happens in the background, so the real world difference between the two is negligible.

I said in part 1 of this review that it's now perfectly practical to leave Rich Capture in the 'automatic'/on mode, and this is how my Lumia 950 and 950 XL are configured.

There are only two downsides to doing this, and I must emphasise that they're only downsides to enthusiasts and real shutterbugs - regular users of the phone won't even think about any of this, so consider these notes from me to you personally:

One other thing worthy of note is that the triple LED flash is quite bright - obviously. In fact, it's bright enough to cause red eye in your subjects when they're looking straight at you. So, in order to alleviate this, Microsoft has programmed in a pre-flash a fraction of a second before the real thing, letting a subject's eyes react and close down their irises - in theory reducing 'red eye'. The only problem is that the pre-flash is also so bright that subjects tend to squint or blink as a result, so I ended up with quite a few shots of people with slits for eyes and not very attractive. I do wonder whether Microsoft should make the red-eye pre-flash an option? Or perhaps make the pre-flash only half as bright?

I mentioned the lossless PureView zoom above, assuming you're running the Lumia 950/XL camera in 8MP mode, but it's very important to note that there's no 'detent' or indicator as to when you hit 1:1 on the sensor when zooming. In other words, go past about 1.5x and you're into lossy 'made up'/interpolated detail territory. Going to 2x, 3x and then 4x gradually increases the degree of ugliness when you look at the resulting image - there's no real benefit in zooming at all beyond about 2x and I do wish Microsoft would put in some sort of indicator on-screen, perhaps showing green while lossless and then moving from this to orange and then red when heading into lossy/blocky territory. Or perhaps a simple textual indicator, such as '1x', '1.5x', '(2x)', '(3x)', i.e. putting lossy zoom settings in parentheses? Just a thought.

Mind you, in 16MP mode, the default in Windows 10 Camera, all zoom is lossy, since you're already at the sensor's limit. Will this be an issue for most people? Will it bother them as much as it bothers me?

And round the front...

Previous 900-series Lumias had paltry front facing cameras (by modern standards), but selfies are now officially a very big thing, of course, so it's not surprising to see Microsoft go with a 5MP front camera here on the Lumia 950.

Results are par for the course - nothing special, but fine for 'selfie' use in most light conditions - there's no front LED flash and there's no Rich Capture facility, which is a shame, but you can fiddle with the usual manual controls (ISO, exposure, etc.) if you really want to. But then that's against the spirit of selfies, so... 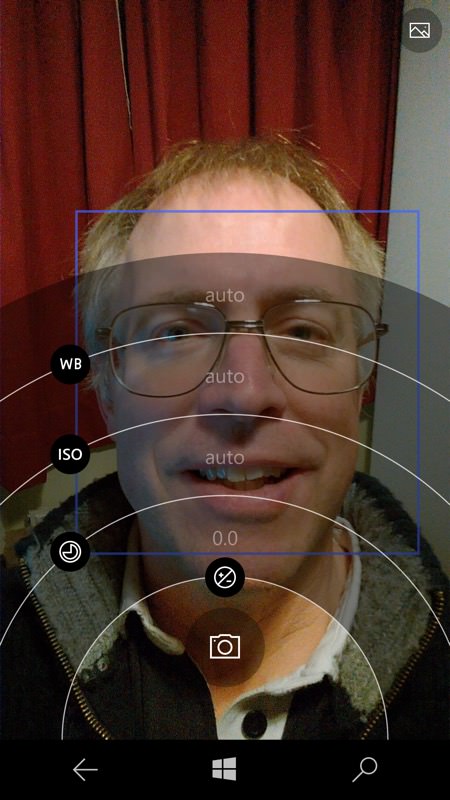 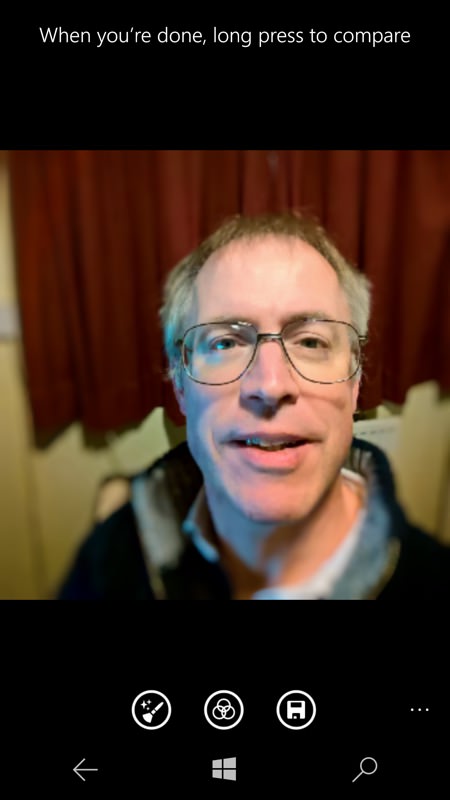 Unlike competing (Android) phone front cameras, there's no 'beauty' mode built-in, though 'Lumia Selfie' (above, right) is only ever a free install away, and this has more enhancement modes than you'll ever need.

Video capture has been exemplary on Lumias for years now, with OIS being introduced with the Lumia 920 in 2012 and we reached the point with the Lumia 930 and 1520 where fully stabilised 4K video capture was quite practical. Not that many people need 4K capture even at the end of 2015, but it's there as a possibility (though the default is still, sensibly, at 1080p in Windows 10 Camera).

In addition to the OIS in video mode, there's also now an additional stabilisation layer in software, something which I analysed here. Much to my surprise, the combination of the two systems worked brilliantly and I suggest that this all be left 'on'.

Now, shooting video is very subjective and an awful lot depends on lighting, stability in the hand, subject matter, and so on, so I'll leave a full compendium of video capture footage and quality for a future article, perhaps in a head to head jig with the Lumia 930, 1020 or perhaps an iPhone. Your suggestions welcome here.

The main thing people seem to want to know about video capture is whether the Lumia 950 (and XL) have the same HAAC microphones and Rich Recording as the previous generations of Lumias. Absolutely. There are the same four high performance microphones, enabling surround sound at rock gig audio levels, though there's no mention of Dolby Digital in the settings for Windows 10 Camera and you'll have to make do with (ye olde) stereo until Microsoft codes the Dolby stuff back in.

Motorhead weren't playing anywhere near me this week, but I shot a few seconds of a blues combo nearby - they weren't ear-splittingly loud, but you'll still get a brief sense of captured audio quality. As I say, more in a future dedicated video feature.

As usual with Lumia Camera/Windows 10 Camera in low light with flashing lights, it's best to set the focus yourself during capture - I didn't above, so you see some auto-focus hunting, though I did try out the PureView zoom while shooting and this works as well as can be expected, given the very low light levels - it really was quite hard to see!

There's so much to talk about here - I concentrated just on rear camera stills and functions and even then only really scratched the surface - and I'm still up to getting on for 3000 words. So expect some more specialist tutorials and features as we head into 2016 with these new flagships.

Overall, I've been really impressed by the main, PureView camera here. It's true that all the post-processing does get in the way occasionally, and it's true that images usually veer slightly towards 'wow' and rarely towards 'natural', but these are minor quibbles. The acid test is which phone I'd take with me on a big family day out with image quality being paramount - and I think I'd go with the Lumia 950 every time (the 950 XL's camera is the same, of course, but when you're mobile then a little compactness and better grippability helps!)

The Lumia 1020 may be able to zoom further and freeze party dancing better, but shot for shot I think I'd take the Lumia 950 (see here for proof) - add in that activating the camera is near instantaneous and that shot to shot times are a fraction of a second, then add on top of that the various Rich Capture flexibilities and it's clear that choosing the Lumia 950 camera as the pick of the crop is a no brainer.