Yes, this is a new UWP application, but it also exists for older devices in Windows Phone 8.1 form, so hopefully this developer has got all bases covered. There are a number of utilities for accessing the various Windows Phone and Windows 10 Mobile hardware reporting APIs - PhoNetInfo being one of my favourites. But we're now seeing UWP applications come along that bring the same (and more) functionality. Here, Specs Analysis not only reports on everything within your Windows 10 Mobile smartphone but also tests most of it too.

Although the application has 'beta' in its title still, I've been monitoring it over the last month and, with an update yesterday, I think it's now ready for the prime time... and some AAWP review love.

The reports and tests in Specs Analysis are divided into four panes:

These make up the four visual tabs in the interface, as shown below: 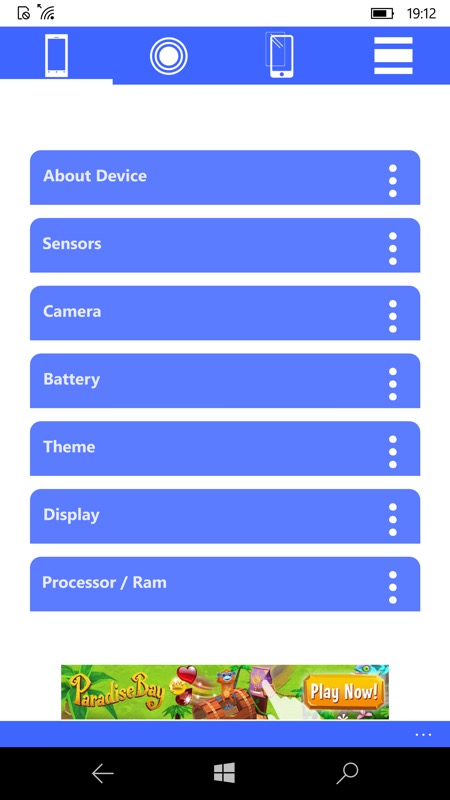 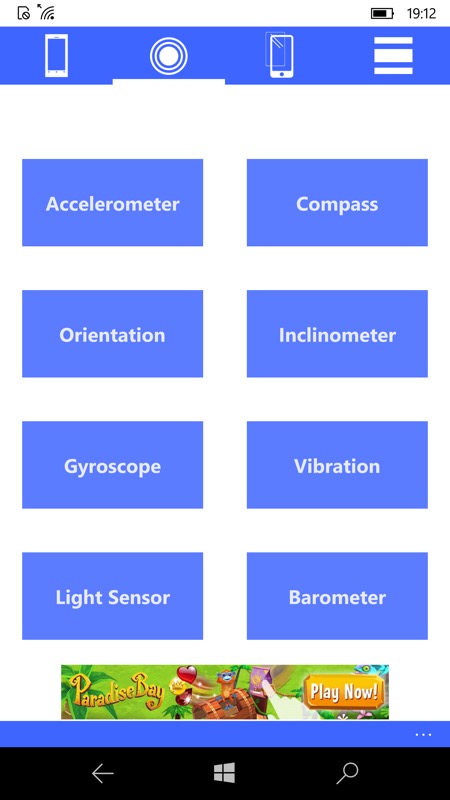 Each of the last three panes are based on tests for the hardware in any Windows Phone, the display tests are particularly colourful, as you might expect. The idea is to not only expose any dead pixels but also to see manufacturing and degradation issues with AMOLED screens: 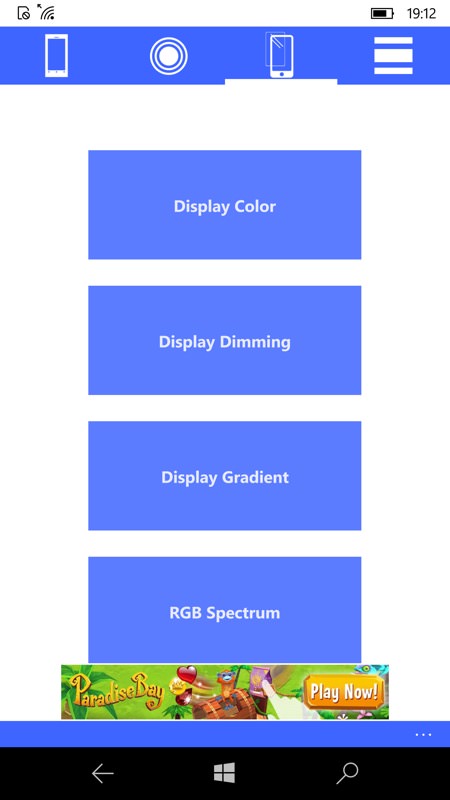 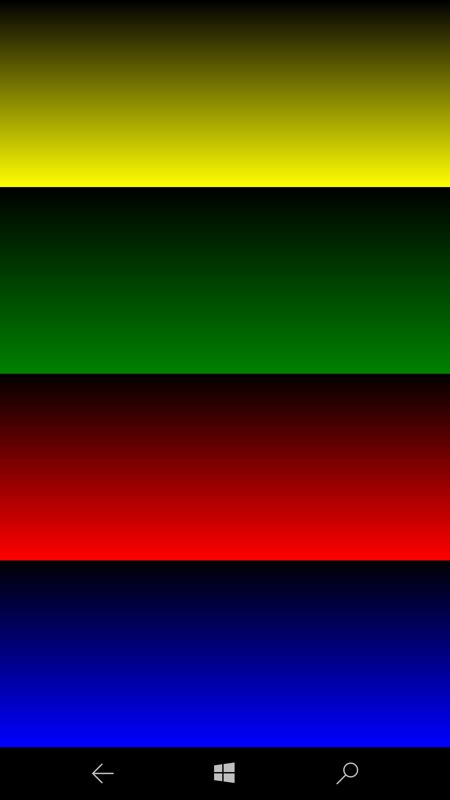 In my case, this was on a Lumia 950 XL and the QHD display came up perfectly with all colours, all pixels and all gradients. It's helpful having each aspect exercised though, rather than trying to spot issues against normal UI elements.

Then we're into the sensors on each phone - of which the Lumia 950 XL here has quite a few - I headed for the barometer, data you don't often see displayed or brought out in applications. The barometer in the 950 XL is amazingly sensitive too, it would vary consistently as I lifted the phone from floor level to ceiling within the one room! 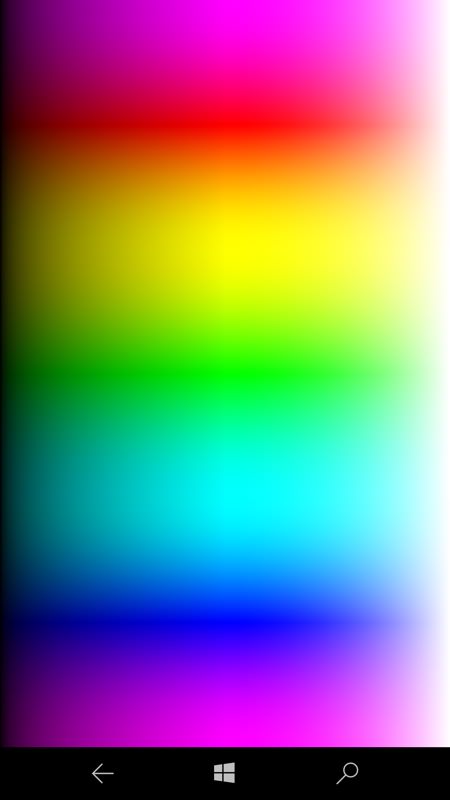 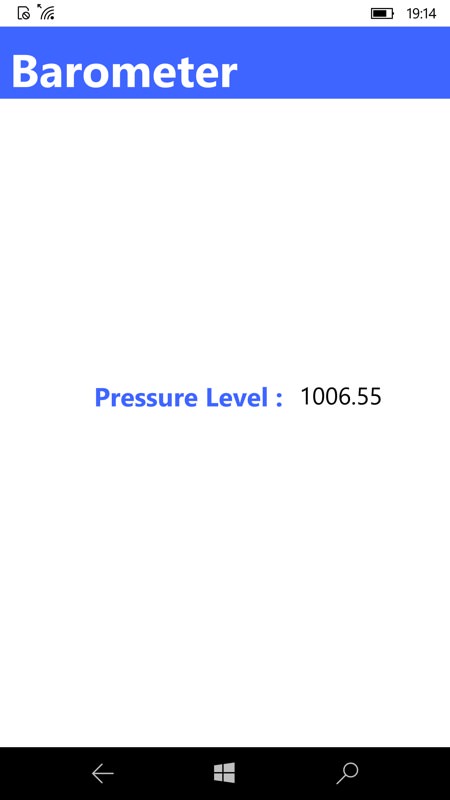 The sensor displays are kept very barebones, with only a number or three on each screen - this is conscious and logical design decision by the developer, though on the screen and on the page here everything looks sparse - I couldn't help but wish for some combination of panes, perhaps grouping sensors together in a (Ster Trek-like) pane of bewilderingly changing numbers as you move the phone around.

Or it could be that the sampling of each sensor needs to be done separately for the really fast response rate shown here? Still - how about a sensor overview at lower sample rate in the next version? 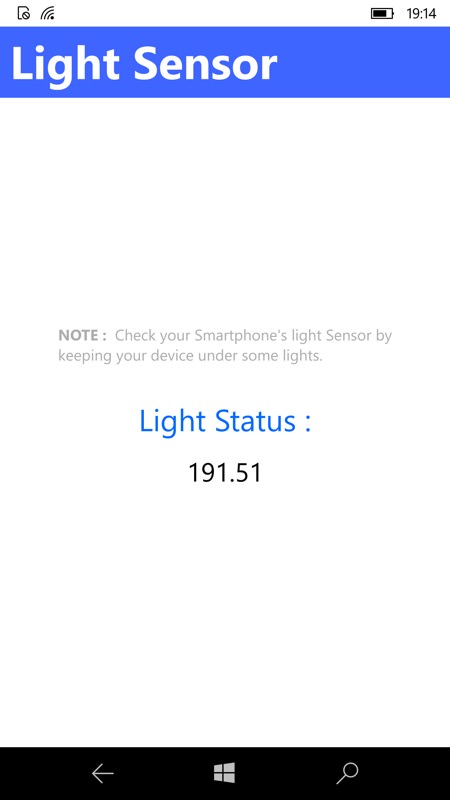 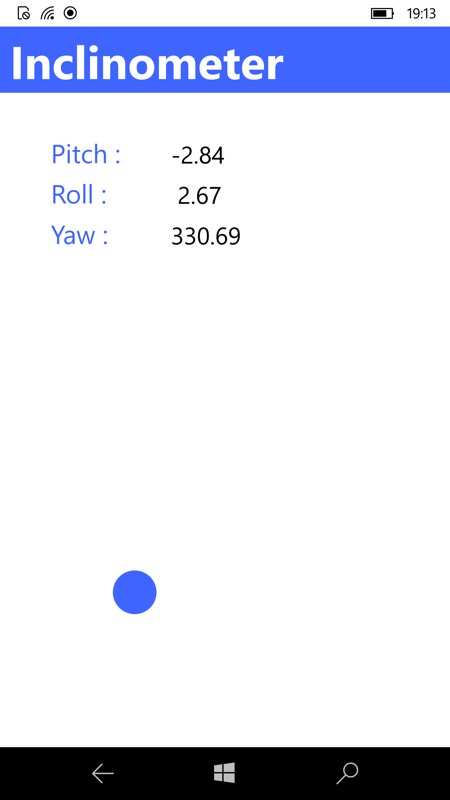 The inclinometer is interesting in that the dot moves around the screen as if it were a virtual spirit level - a nice touch.

The speakers test just plays some bird song, in stereo if your phone has stereo speakers (like the Elite X3 or IDOL 4S). The microphone test allows a quick voice  recording and playback - functional and no frills. I would have liked to have seen tests for all the various microphones on each device, not least because some phones are prone to particular mikes failing. Something else for the developer's to-do list.

You'll have noticed that most of the numbers reported back lack units. Or indeed context. These are the raw values reported back by the hardware APIs and are really only meant for developers to interpret, e.g. in using them as inputs for controlling an app or game, but I still would have liked to have had some attempt at putting proper units (millibars, degrees, whatever....) throughout.

We do actually start to get units in the system overview pane, though you have to interpret these through expert eyes - there's no handholding here. So, for example, the current RAM used is listed as 54.8MB used of 1536MB. Given that the Lumia 950 XL has 3GB of RAM and that I had at least a dozen other applications 'running' at the time, something's clearly not right here. What I think is happening is that Specs Analysis is reporting its own RAM use from a total pool of RAM available to it.

Ditto the battery status, which is reported in mWh rather than the much more familiar mAh (at 3.7V), I do think the developer could have had a go at doing the simply division and producing a figure in the usual units. Plus it seems as if the hardware is lying anyway, with the 'fully-charged energy capacity' identical to the 'design energy capacity', something which only really happens when a device is brand new. For a year old Lumia 950 XL, the battery should be down to around 90% or less of design capacity in my experience, even if I'd treated the phone exceptionally well. This isn't the developer's fault, again, but some explanatory text for the numbers would be helpful. 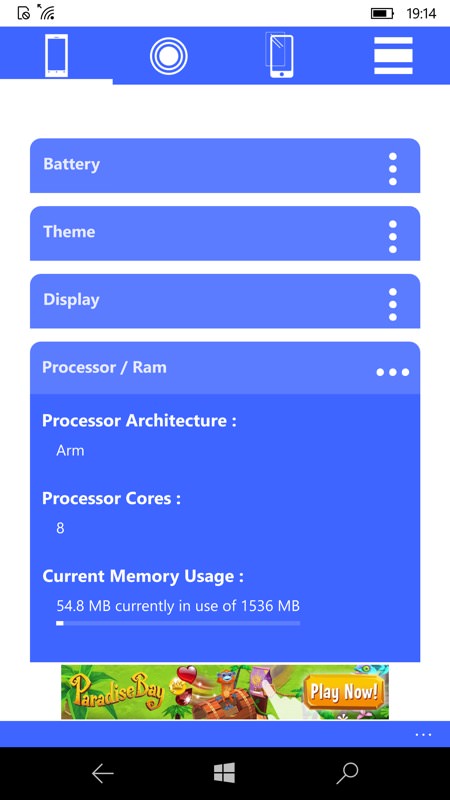 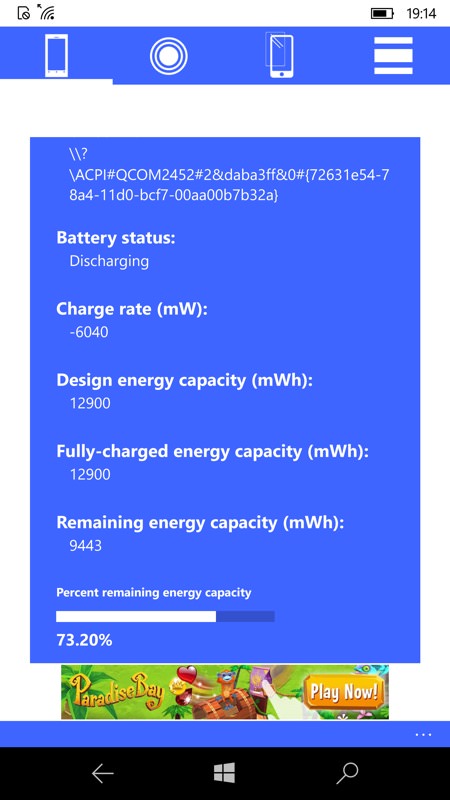 These sort of numbers could be made a lot clearer by the developer, with amended labels, tool tips and help screens as needed.

So, quite a bit of (mainly cosmetic and text-based) work still to be done, but already Specs Analysis has won a place on my Windows 10 Mobile devices - let's hope that development continues through into 2017 - this can only get more and more useful.

You can grab this here in the Store. It's ad-supported, but you can use an IAP to get rid of the fairly small ads if you want to support the developer.

PS. This being a UWP application, I was curious to see it working on a Continuum display - indeed it correctly shows up my test 720p monitor as having that resolution: 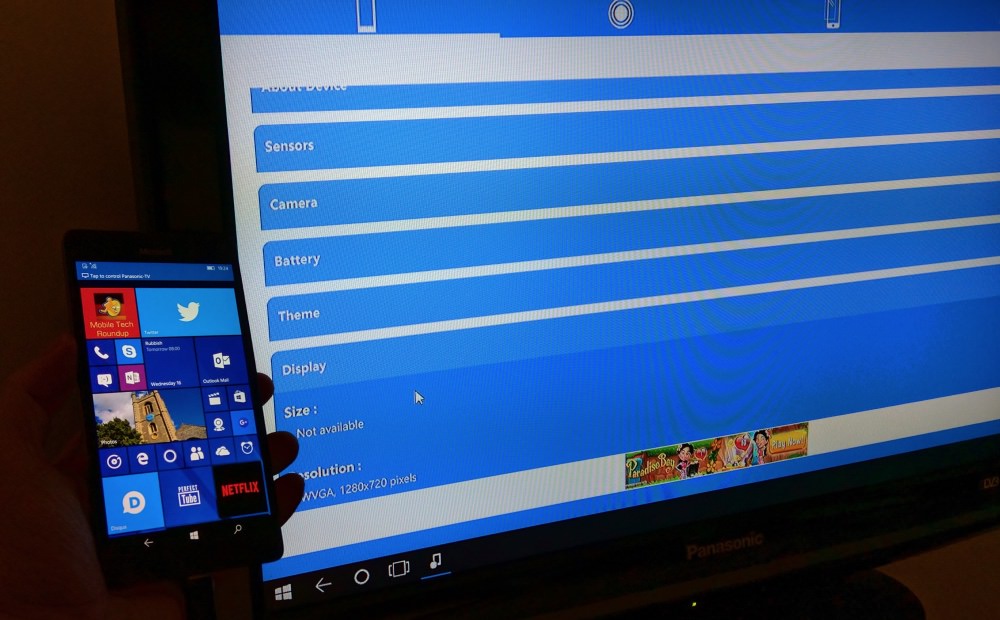