Now here's something you don't see every day - a third party 'Continuity'-style system for passing information between specific applications on different devices. Think browsing a web page on your PC and then 'handing it off' to your phone for further persual on the go. Does it work? Kind off. Is it all smooth sailing? No - or at least not yet. But Hand Off (UWP) here is still under fast and active development, so it can only get better, right?

Hand Off acts as a 'share target' on any Windows 10 device (so phone, tablet or desktop, it all works in any direction) and 'hands off' the appropriate action/URL/object to the appopriate application on the destination device. How well this works depends hugely on what you're trying to do and whether Hand Off's developer has coded up the right 'hooks'.

The core examples do work though, after a fashion, and show the way forwards:

This should be simple, just passing a URL through the Internet to another Hand Off-compatible, Windows 10-signed-in device. Start off on the phone (for example) and use the 'Share' menu command to share to 'Hand Off'. This then presents a list of other registered 'end points', presumably other signed in and compatible installations. I pick my desktop (actually a Surface Pro, but you get the idea) and within a couple of seconds the same URL is opened in Edge on the latter device. 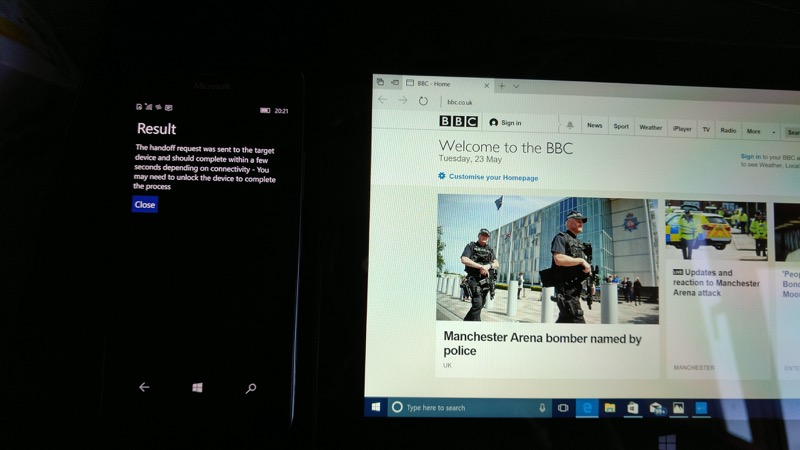 Faster than emailing myself a link anyway!

From Groove on your phone, hand off to your PC by sharing an Album or Artist or Playlist to view it on your PC or vice versa

This too works without a hitch. Although Groove itself won't let you share a specific song, anything that can be 'shared' will pass through the appropriate object (e.g. a Playlist) to Groove Music on the other device. Again, going from my phone to my 'desktop': 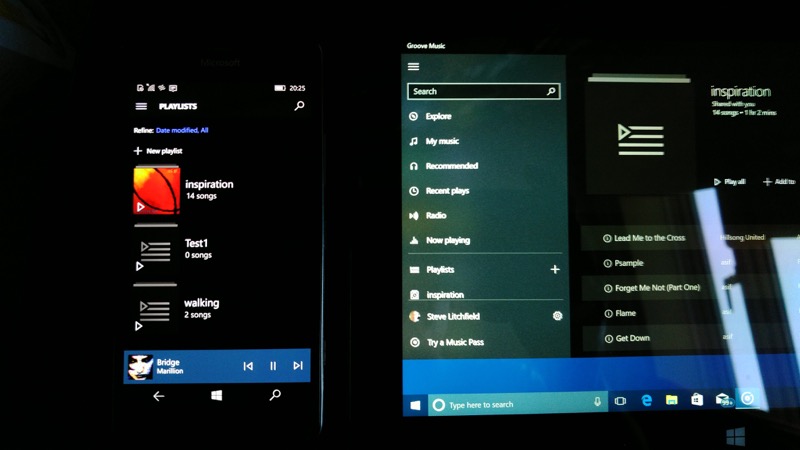 Again the match up worked perfectly.

With the caveat that the sharing goes via Edge and then you get bounced to the Store application in the usual way, this also worked fine, in this case trying to go from the PC Store through Hand Off to the phone: 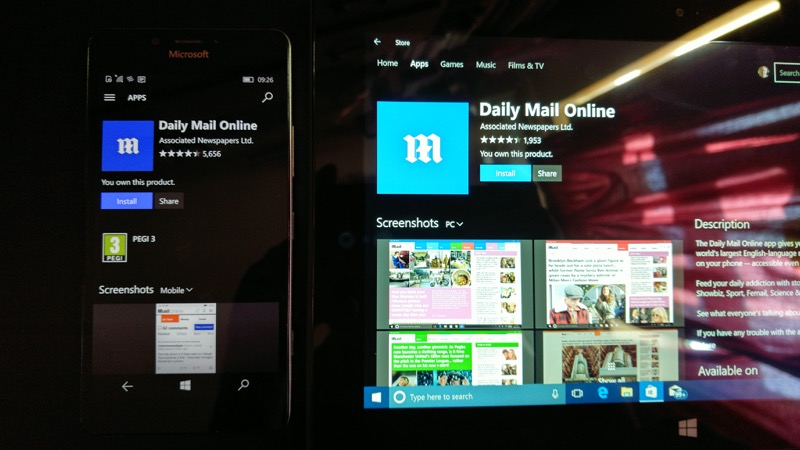 This didn't go quite as smoothly, sharing from Maps on the Desktop to the phone worked perfectly, with bing.com on the phone auto-launching Maps with the right coordinates, but when going from phone to Desktop, I was left with Bing Maps in the Edge browser and no launching of Windows 10 Maps. Still, the location is shown: 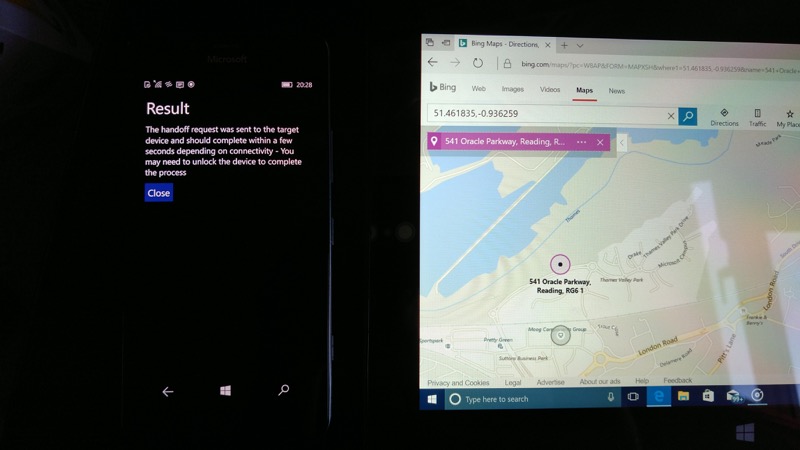 At least the 'to the phone' bit works perfectly, since this is a common use case for such hand off functions, i.e. heading off with a map to guide you somewhere. A cynic would say that you can just set the appropriate location as a Windows 10 Maps 'favourite' and it will be synced across anyway, mind you...

This isn't actually advertised, but the developer does encourage experimentation. Sharing from Windows 10 News seemed like a logical thing to try, but it didn't quite work - in each case I was left with an article in Edge rather than the same story in News: 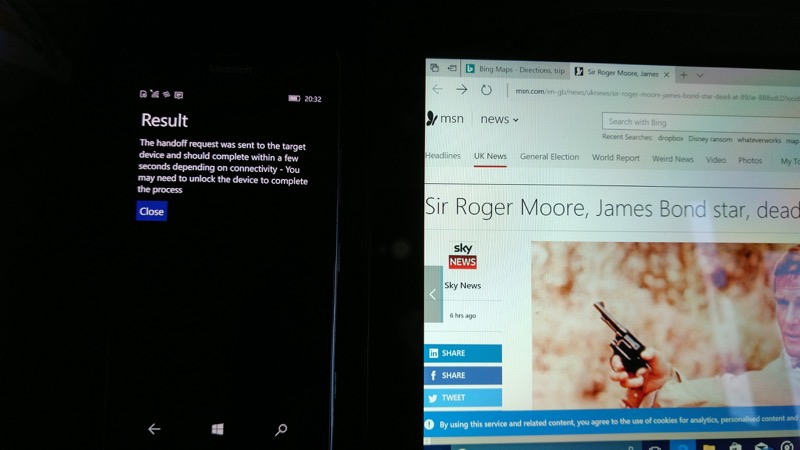 Oh well. It does seem as if the system is both a) heavily URL/text-based and b) heavily dependent on how Edge handles specific content types. The latter is down to Microsoft, of course.

The developer also lists the example of sharing an article from the Windows Central app - if you have "Apps for Websites" enabled it will load the article in the WC app on your other device. Of course, I was trying to mimic this with the AAWP Universal application, which should in theory work in the same way - and yet doesn't. Sharing via Hand Off from AAWP Universal resulted in the same story coming up in Edge (again). Maybe there's something needed on the AAWP server to tell Edge to launch the app?

Over to you for reports of other Windows 10 applications which do work with Hand Off.

Also included is a beta of a universal 'Clipboard', with text being passed over the same remote mechanism between signed in devices. Try as I might, I couldn't get this to work, but I'll keep Hand Off installed and we'll see how updates pan out. Microsoft has been working on its own universal clipboard for a while and we expect this to appear in Redstone 3 shortly.

Finally, there's a Remote Dialler feature, where you can type in (or paste in) a phone number on the Desktop (in the Hand Off application) and then it will get dialled by the phone. This works but is somewhat clunky in real life. By the way, you can't 'share' from People on the Desktop, so you're reliant on long pressing a number in People, choosing 'Copy', and then going to Hand Off's relevant pane and pasting the number in there, and so on - it's a lot faster to just pick up the phone (with your same contacts on it!) in the first place.

Now for the six million dollar question - would I use Hand Off in real life? Probably not yet - it would need to work more reliably across more applications. A large part of this is down to Microsoft, its sites and applications, but some of the development is also needed in Hand Off itself. Let's revisit this in a few months.

In the meantime, comments welcome - does Hand Off solve a problem for any of you?