I have to wonder why it's taking Microsoft so long to implement its much anticipated 'cloud clipboard' - but then I review something like Connected Devices and the complexities start to hit home. You may remember that I've already reviewed Hand Off UWP, from a different developer, which had everything but clipboard operations sorted. Clipboard copying here mostly works, plus you get local file sharing, which turns out to work well too, and Connected Devices is absolutely free. What's not to love?

What sounds simple (clipboard copying via the cloud and your 'connected' [and signed in] devices) is actually quite complicated. For example, if you're signed into two phones, a tablet and a couple of PCs, would you really want the copied content in the paste buffer on all of these? What if it's something inappropriate or sensitive? What if the content is of a type that's not compatible, not least because you might paste it into the wrong application or situation? What if the copied item is large and bandwidth is an issue on some cellular devices?

And so on. It's not an easy computer science problem to solve. Which is why Connected Devices here goes down the tightly focussed route of picking the particular device you want to target and even then restricting you to either a string of plain text or specific attachment types, the latter only when both 'ends' are deemed compatible and hooked up on the same network.

With this app, you can share any web link, text, or file from any app to any other Windows 10 Anniversary device that you own. This incudes: Windows 10 desktops, laptops, tablets, phones, Xbox One, and Hololens.

All of which overblows the functionality slightly, and even more so when you realise that there's quite a bit of uncertainty involved - which the app does warn you about as you go along, in fairness.

I've been trying out Connected Devices between a Lumia 950 and a Surface Pro. Let's start with the simplest case, copying a text string - in this case a URL - from Surface Pro to Lumia: 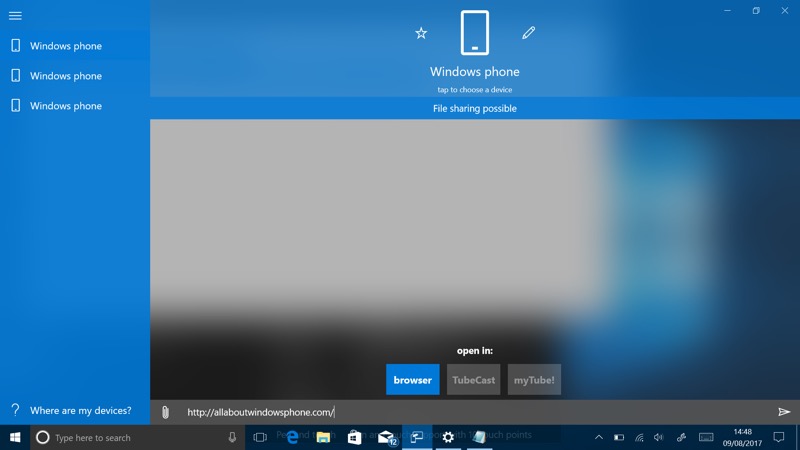 The text field is at the bottom and the send icon is on the right. The big buttons above didn't work for me at all - they light up when Connected Devices sees the http:// bit but only the left button was ever highlighted and none of them seemed to ever do anything. 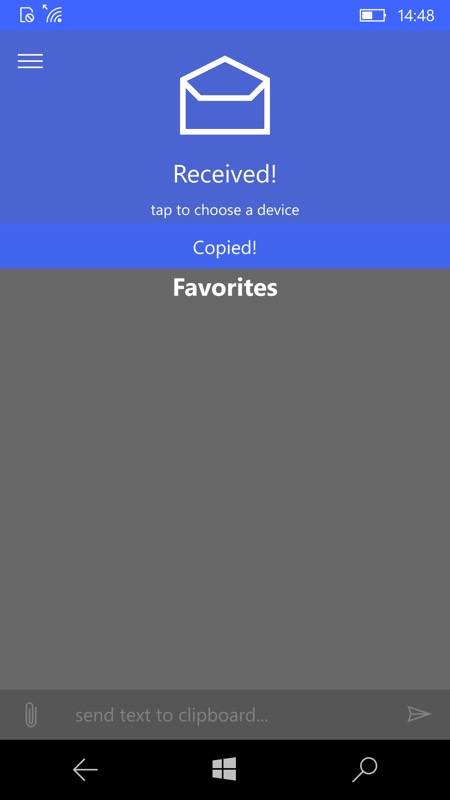 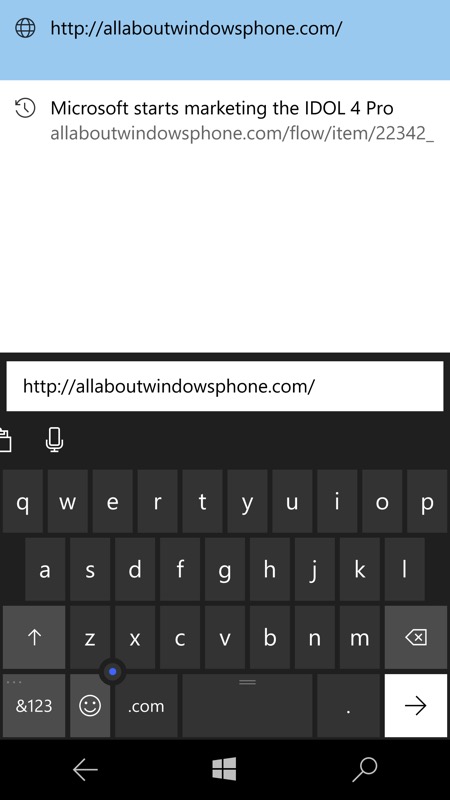 After sending the text string, after a few seconds, the receiving device puts up a confirmation, though nothing gets launched, as I'd have expected. Oh, and the receiving device has to be in 'screen-on' state for all this to work at all; (right) so then you have to go to an application (in this case Edge) and manually paste in the string/URL.

At first sight, there's no way to copy more than a single 'line' of text by this mechanism, but there's a hack, whereby you can paste multiple paragraphs of text into the send line and then paste it all back out at the other end - the catch is that the text isn't shown by either end's Connected Devices app - you discover that it worked by using the text in another application!

You can send attachments too, here's me tapping the paper clip icon and then picking a high res wallpaper to send over: 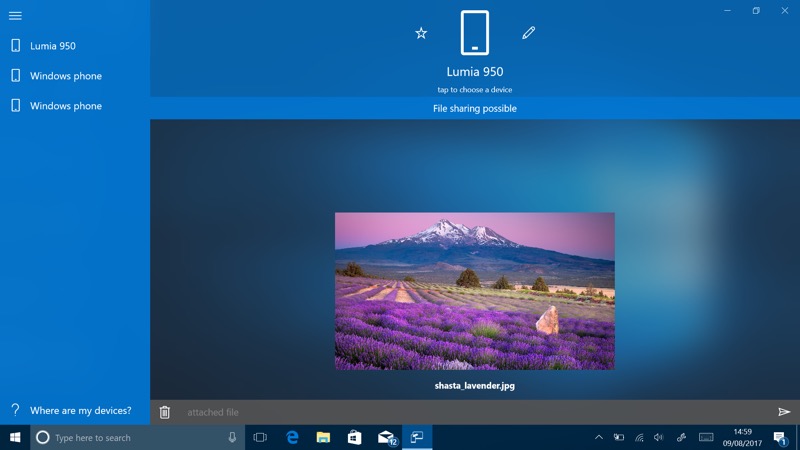 Note the line 'File sharing is possible' - it always shows this from the Desktop end, and usually says 'File sharing unlikely' from the phone end - bizarre when my success right was higher going from the latter to the former! 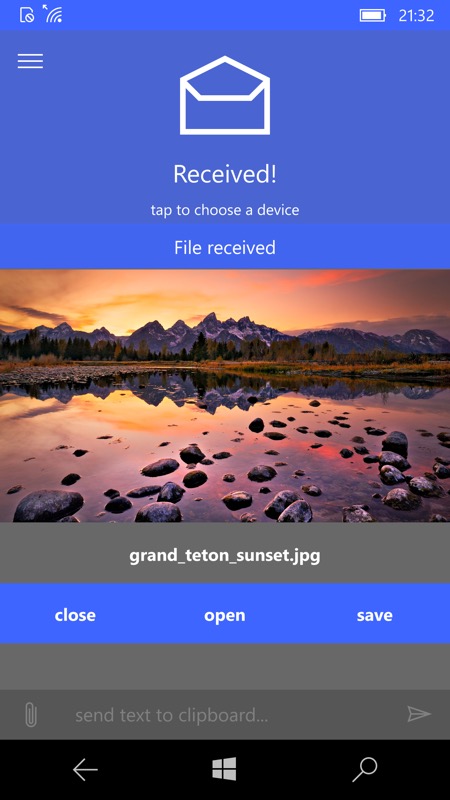 In fact, the transfer didn't work first time around, so I picked another image and tried again - and this time it appeared in the Connected Devices app on the Lumia. ("If at first you don't succeed then try, try again")

What about going in the other direction, from phone to Desktop? Let's try and send a photo: 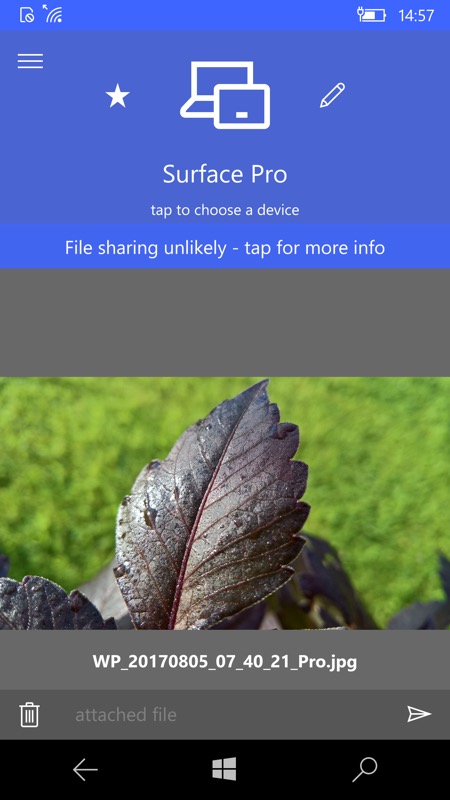 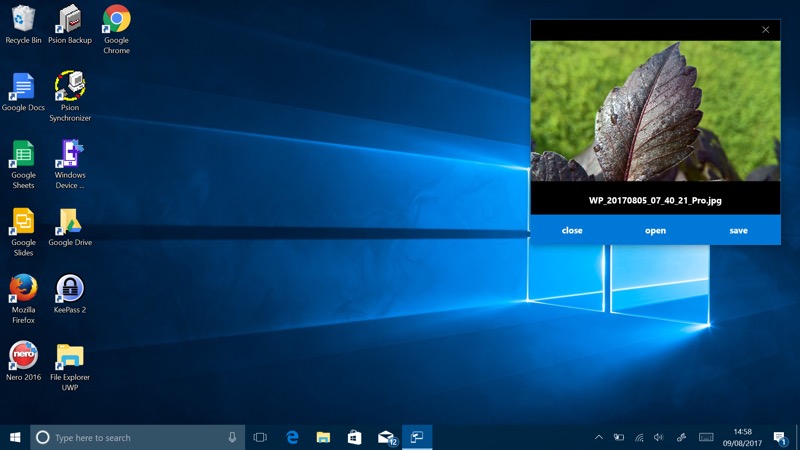 The file arriving on the desktop, via the cloud, neatly appearing in a pop-up window. In fact you can even select multiple files an they appear in an image carousel. Curiously, if you select multiples on the desktop and send them to the phone, they get bundled into an intermediate ZIP file (shown below, left). 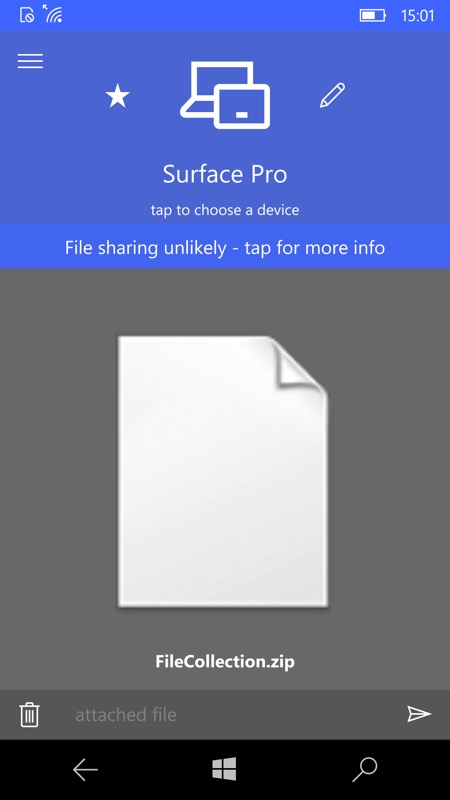 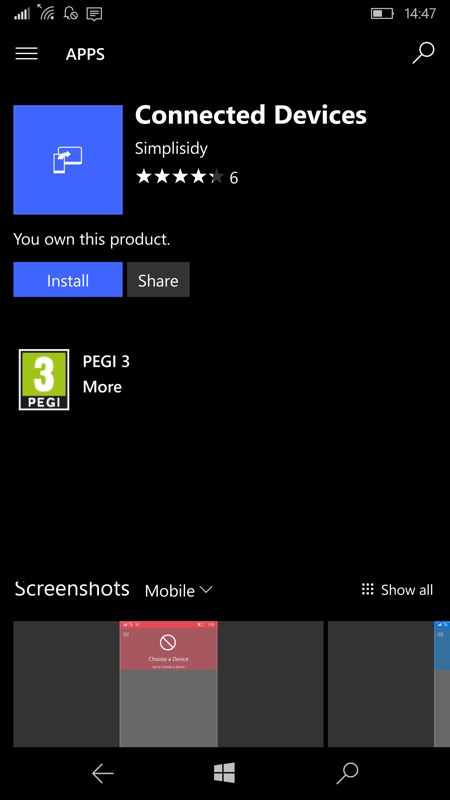 One nice touch is that if you try and copy something to a locally connected compatible phone and this doesn't already have the Connected Devices application installed then the latter device is taken straight to the entry in the Store, ready to install it after all. Very neat.

I'm only scratching the surface of the possible permutations of device and content, but you get the idea. You'll also get the idea that it's not foolproof - more than once nothing appeared to happen at all. There are several tech ducks which all have to be in a row for this to work as advertised. Mind you, this application is free, so it's churlish to complain too much - and the developer does seem to be very active in terms of fixes, so it's worth being patient. And maybe it'll solve a problem for you and your own workflow?

Overall, though, you have to ask yourself the question "wouldn't it be ten times quicker and easier to just email the text or attachment to yourself and pick it up on the other device?" Or, for files and attachments, "why not just put them in OneDrive and grab them as needed from there?" Bombproof, independent on both devices being fully active and powered on, etc. Mind you, when dealing with anything other than pure text, Connected Devices seems to piggyback on the local Wifi network and so uses drastically less cloud bandwidth - so there's a big saving there compared to the pure cloud solution.

Connected Devices, as with Hand Off previously, is an interesting concept application and great practice for the developer but it is unlikely to solve many real world inter-device needs. If it worked 100% of the time then maybe it would find a niche. But the current 90% doesn't quite cut it, even as a free application.