A couple of years ago I looked at chess games for Windows Phone, looking specifically at playing against the phone's AI and not human opponents. I promised then that I'd do a follow-up or two looking at playing other people online - and here's the first!*

* It turns out that some of the options are really not very slick at all, so I have gone for individual reviews of the best applications rather than another round-up!

Winning at chess is almost actually easier than figuring out this UWP game for Windows 10, as in how 'Chess Online' fits in with the ChessFriends.com site. Is it the official application for W10 or a third party web wrapper and if the latter does it get a cut from any in-app-purchases? And so on. Regardless, it's a fast and fun way to get going in the world of online chess, you set your own opponent parameters and then see who bites! 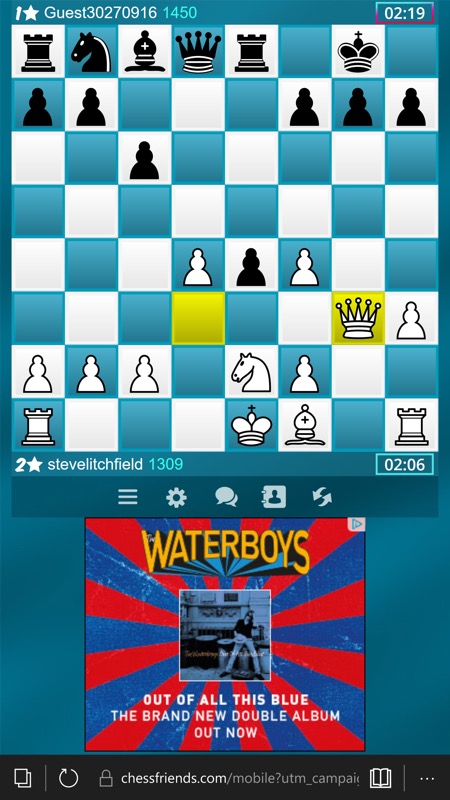 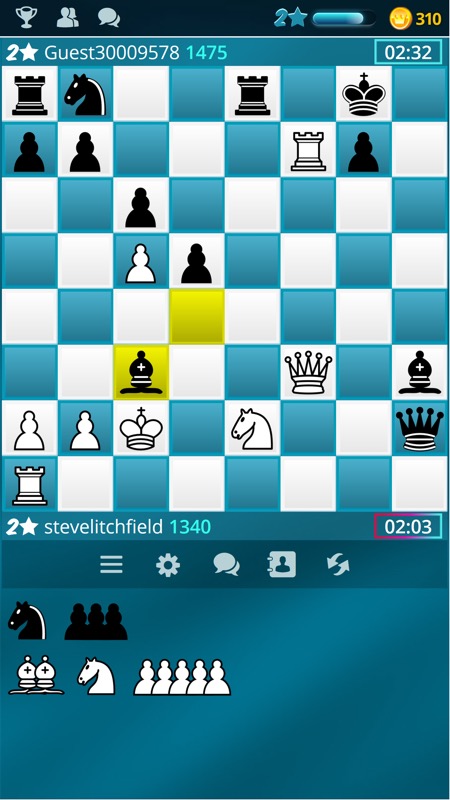 On the left, ChessFriends.com in Edge - playable, but large ads, plus the URL bar. And, if I'm honest, poor UI response times, which don't help when playing against the clock; (right) playing here in the Chess Online UWP app on the same Lumia 950 XL - larger board, no ads, taken pieces shown, no URL bar - a much more pleasant experience!

Playing chess against another human being is a very different proposition to playing a computer, of course. For starters, the human will make mistakes and won't necessarily play the 'obvious' move; secondly, they'll generally play at a lower level (and thus are defeatable!); and finally, there's always a timer (a chess clock) involved, as a way of making sure that you can't just sit and think for ages on a move while your opponent waits and gets more and more frustrated.

In all my testing here, I found myself happiest playing with around 7 or 8 minutes per player for all their moves. Faster than this and I usually ran out of time (my brain isn't as fast as it was!) in a lengthy game, longer than 10 minutes and each game can then be up to 20 minutes, which may be longer than the period of time I was willing to invest in this 'real time' chess session.**

** there's also that, the longer the time allowed to make moves in a game, the greater the chance that your opponent will be cheating and using a chess computer or program, i.e. inputting your moves and calculating best responses. I don't think many people cheat like this, but one can never know!

Although available for Windows Phone 8.1 before it (and still in the Store), Windows 10 Mobile phones get served this version up, a full UWP that also works with Continuum displays and on laptops, etc. The styling is very 'iOS' throughout, perhaps indicating the desire by the programmers of the chess system on ChessFriends.com to mimic in HTML5 what they'd already done for the iPhone client. 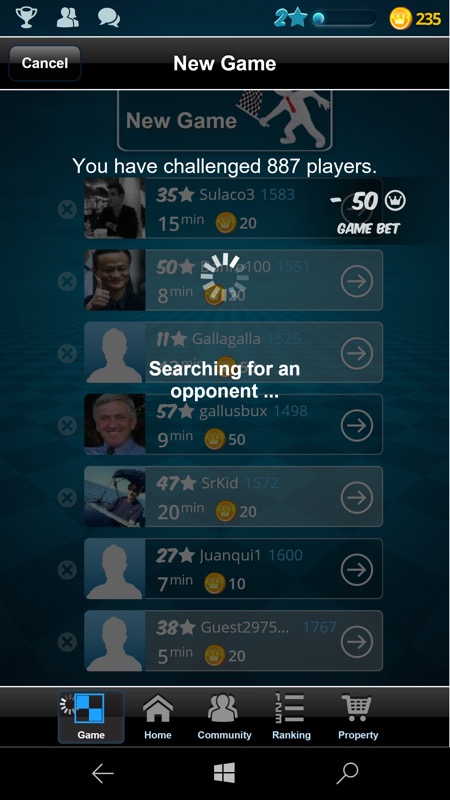 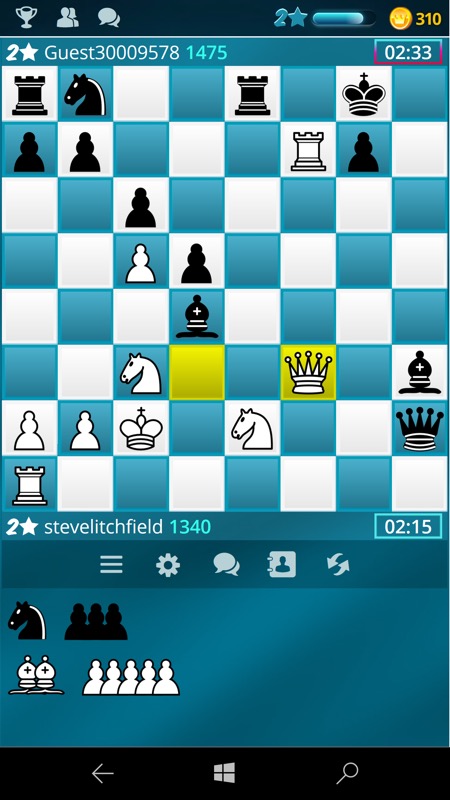 Searching for an opponent that matches your chosen time and rating allowances can be lightning quick (if you haven't been too fussy and at certain busier times of day) or it can be slow (say, 30 seconds, if youve been more particular and if it's the middle of the night in the Eastern continents, especially). But with thousands of people typically online at once there's always someone to play when you get that urge to pit yur chess wits against another human(!) 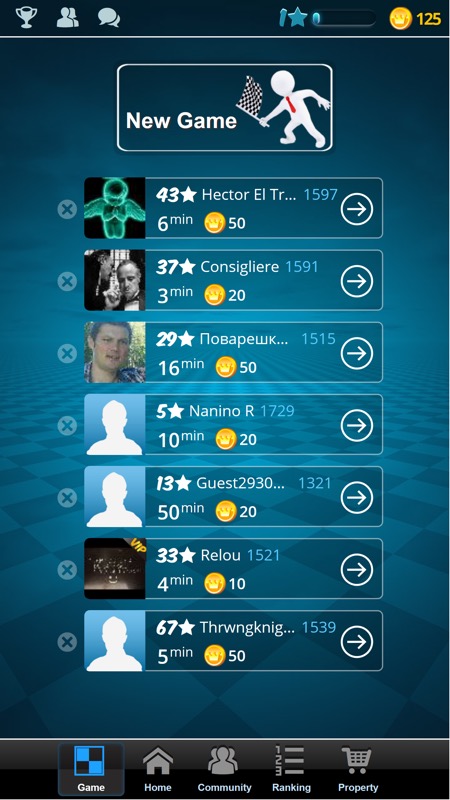 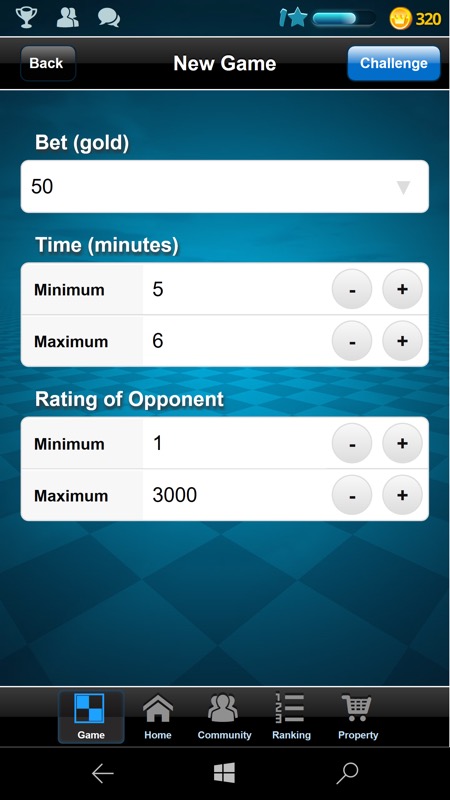 An ever changing list of the most recent results in the system, fun to watch for a few seconds, though galling that was there for a few seconds as loser several times! In my defense, I was also concentrating on getting good screenshots while playing! (right) setting up a new game search, with a strong 'bet'/incentive/lure and a wide opponent range...

The entire system of online play, of users and their parameters and wishes, is done by the ChessFriends.com web site, of course, but the Chess Online UWP application here is able to make things much smoother - and faster - in terms of UI. As indeed a native 'client' for a platform should do, when compared to doing everything via a web browser. 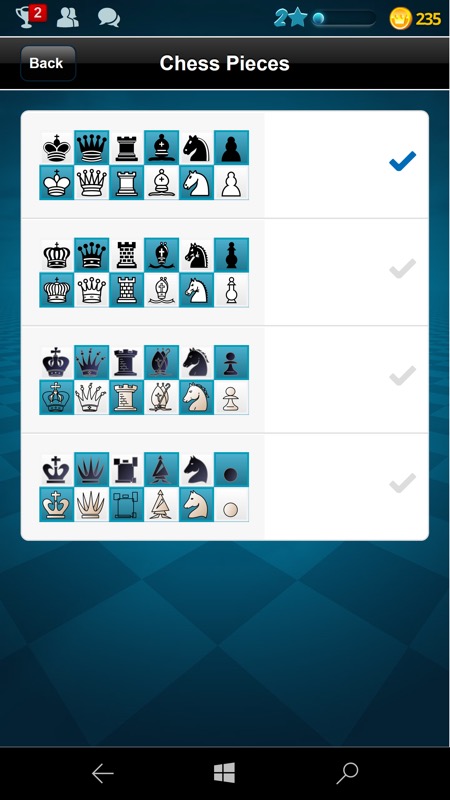 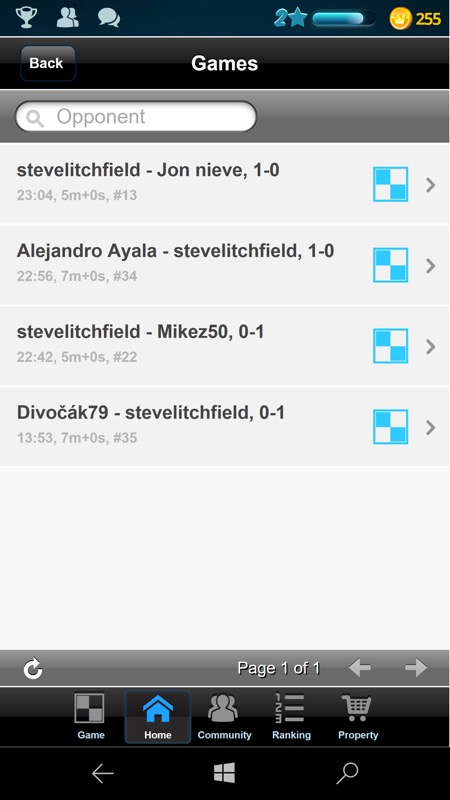 Choosing which piece designs to use and (right) browsing my most recent games...

I don't quite 'get' the system of gold and general in-game currency, perhaps because my rating is still too low - as you progress to stronger opponents you lose more and then run out of money and have to buy more if you want to carry on playing at the same high level - I think that's the idea. And with ChessFriends.com having existed for a while now and thriving, the developers do seem to have done their sums right.

Having said that, my usual freemium pet hate of over-greedy in-app purchases is present here - £70 with just a couple of taps? Most people will get by with just the £5 purchase - and indeed most casual players will never need to buy currency at all, since you get auto-topped up at the 'bottom' - but it's still galling to see the 'crazy' option as well. 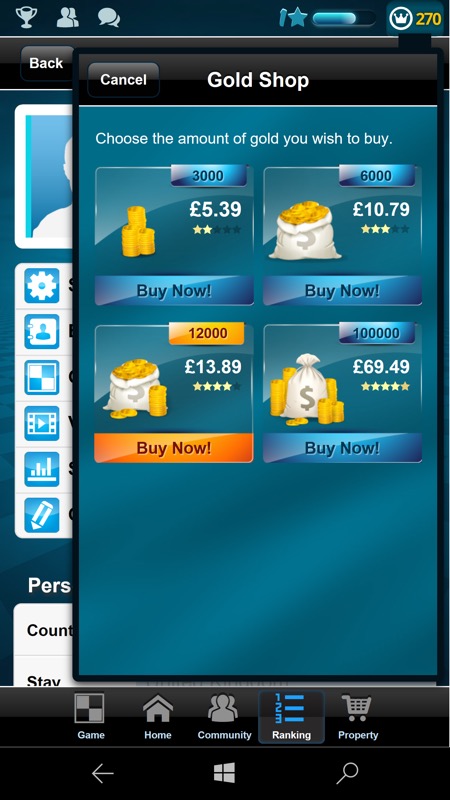 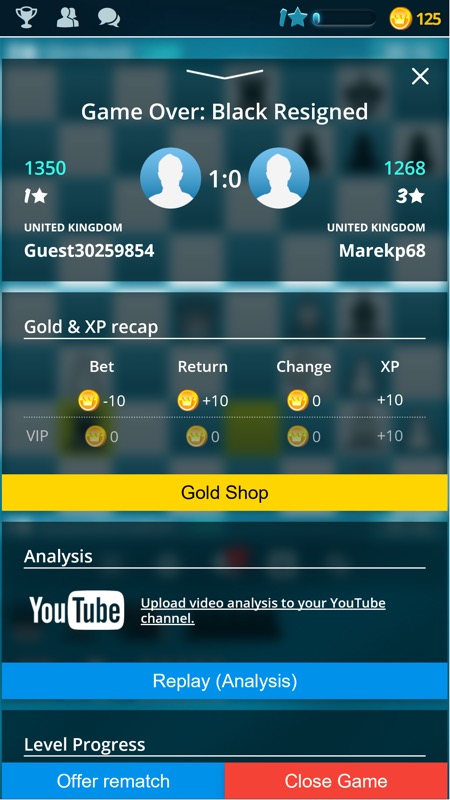 I was impressed overall - Chess Online UWP has found a place on my Windows 10 Mobile Start screen (though there's no 'live' tile). You get into the action fast, and the games themselves can be real adrenaline rushes as you try to defeat an online opponent against an ever ticking clock.

But also because, although 99% of the functionality is coming from the HTML5 served up by a web site, the intelligent wrapper approach here genuinely improves the experience with larger board, an extra function, no address bar and faster response times - important when every second counts!!