Something for the weekend, sir? Perhaps a dollop of gasoline-fuelled car smashing adrenaline? You see, Demolition Derby Multiplayer UWP is a terrific game that's hard to fault for Windows 10 on Mobile, tablet or desktop. Driving against both humans 'bots', your goal is essentially to smash all other cars to smithereens and be the last vehicle driving. It's fast, fluid, and you're into the multi-player action incredibly quickly.

Somewhat curiously, this seems to be a follow-up to a similar single player game by the same development team under a different name, Demolition Derby: Crash Racing, which I featured here back in 2015. Even more so, this latter Windows Phone 8.1 game is actually linked to as the 'Career' mode from the menu in Demolition Derby Multiplayer UWP for Windows 10! So, despite the different branding and technical pitch, both games shuold be seen, I guess, as a linked pair. 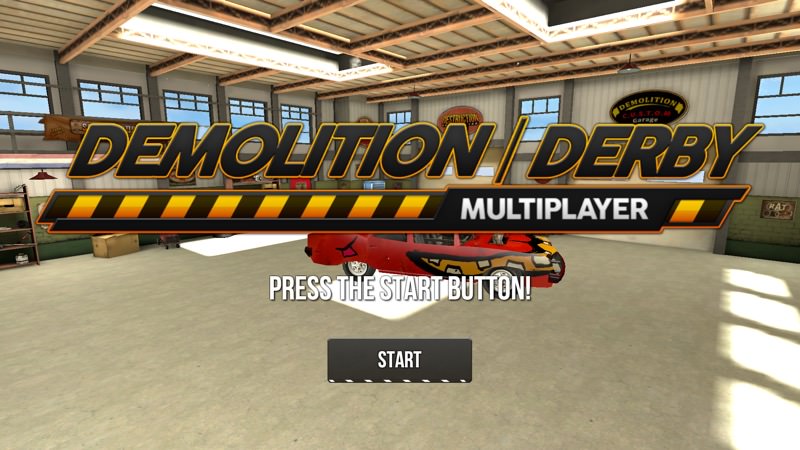 Also interesting - and important to note up front, is that even though the Store entry refers to the usual swingeing freemium in-app purchases, they're nowhere to be seen in my play testing. Instead, there's just the very reasonable £1.79/$2 or so to remove the interstitial video ads - and that's it. So maybe the developers though better of the usual freemium crimes and back-tracked to sanity, in which case well done. 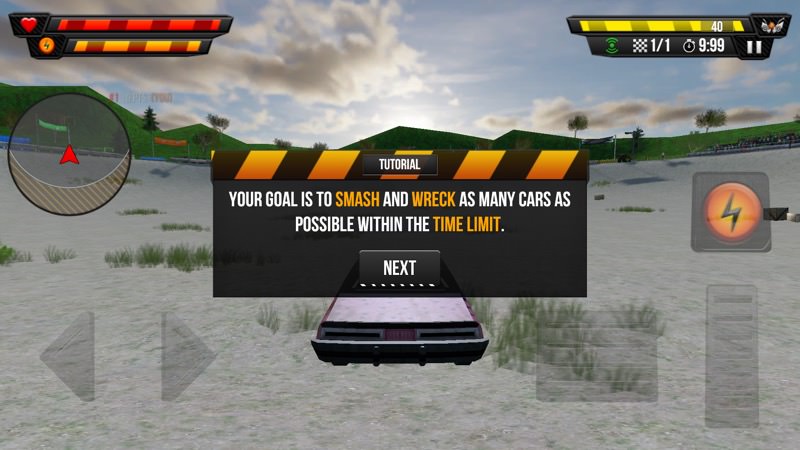 An optional tutorial points out the various UI elements in the main game, with health, timing and contact bars, 'radar' showing where the other cars are, 'nitro', left and right, and brake and throttle. You can turn on accelerometer control in Settings, but - trust me - for this game, the on-screen buttons work better.

But on with the destruction, as that's the bit you're waiting for. Through a variety of different and atmospherically-lit 'arenas', you take your car and engage in the usual destruction derby antics. To whit, building up speed and timing lunges at other cars in order to 'T' them and generally wreck them. While not getting smashed up yourself in the process. 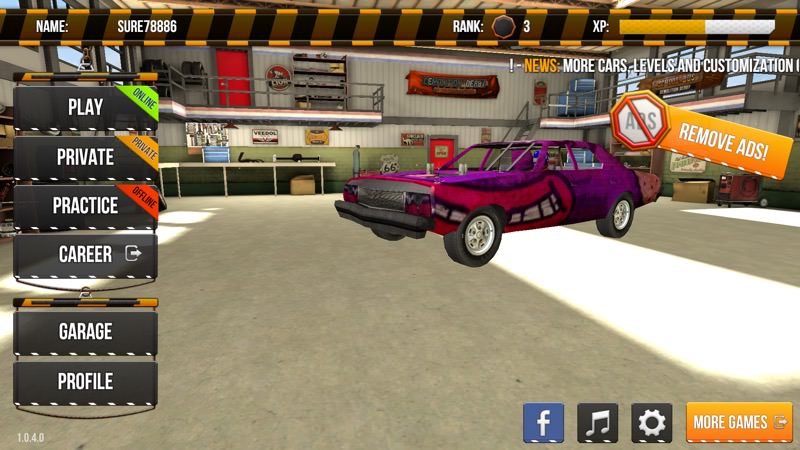 The multi-player aspect comes in because each derby is populated by a mix of humans and 'bots' (making up the numbers if there aren't enough real people online), with a typical gathering time for each match of up to 15 seconds, after which you're off and (motors) running. There's usually someone else around though, at any time of day or night, because of the game's reach on not just Windows of all varieties but also Android and iOS. Pitting one's motoring wits against other humans is great fun and there's nothing like the shock of lining up a strike only to be smashed from the side by an opponent and taken out of the game. 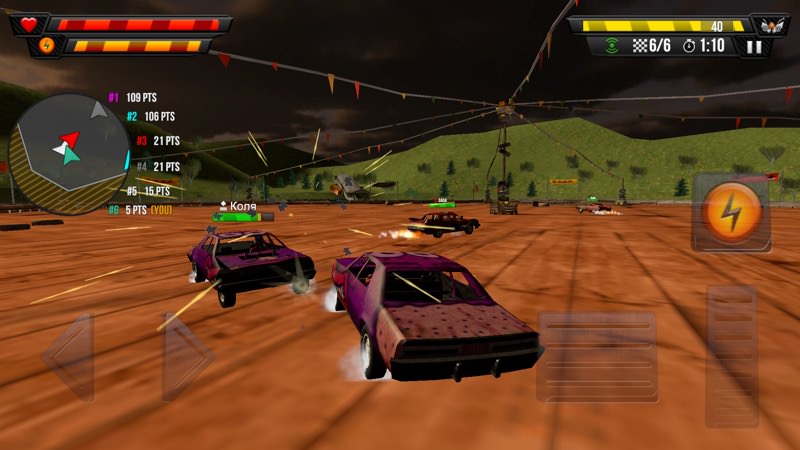 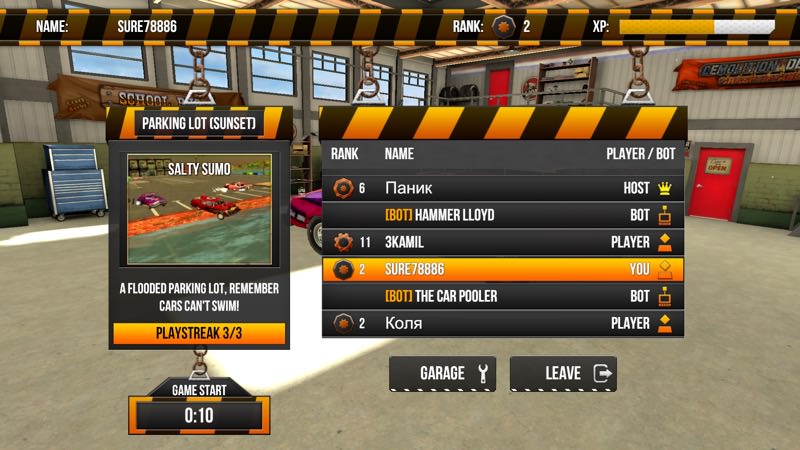 10 more seconds until the game starts and the lobby closes... Note also the arena graphic and tip - each arena is bounded in different ways - water that you have to stay away from, barriers to bounce off, a sheer drop that you'd best avoid, and so on.

You'll be wondering about driving against your friends, whether in the room or on the other side of the world, and this can be accomplished though using the 'Private' lobby system, wherein you're the host and you share the lobby name with just the people you want to compete against. In fact, you can also be the host of a public game if there's not one available for to join immediately, so you get to play host and then you wait for a short while for other people to join - or you just progress anyway, with bots, perhaps as practice? 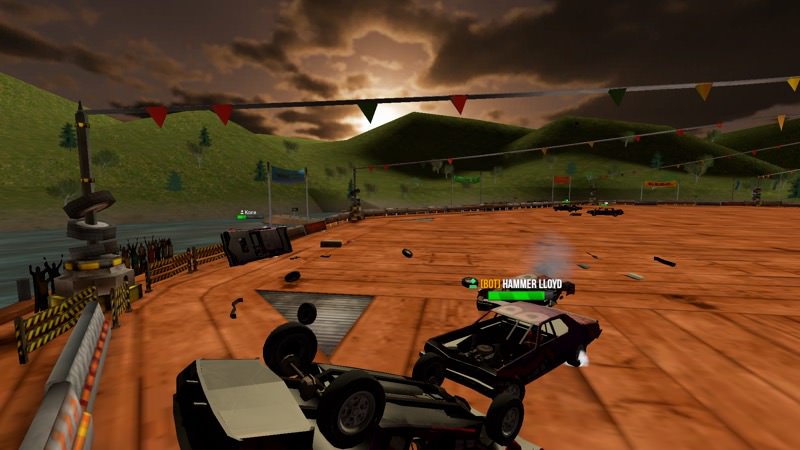 Terrific visuals, a fast-rendered world, moody lighting, all looking rather splendid on my AMOLED-screened smartphone. 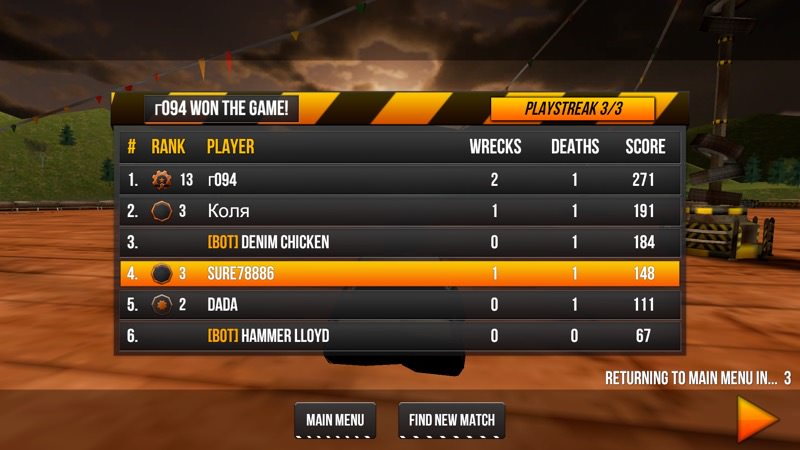 Each game/level ends with a scoresheet - you'll do well to come top!

The game's variety extends to different goals too, with 'hold the flag' particularly fun, where in whoever rams the car with the flag hard enough 'acquires' the (visible) flag and then everyone's after that car, and whoever has the flag at the end of the allotted time 'wins'. Throughout all of this, you're hammering around the arena looking for (literally) smashing opportunities. 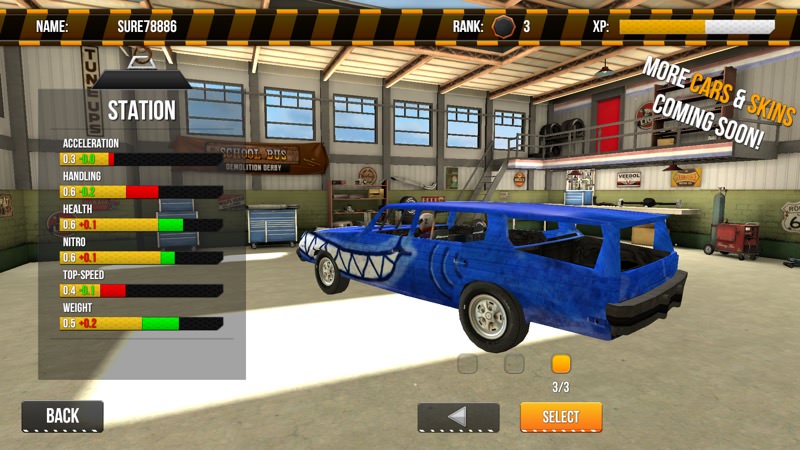 You start with a handful of cars - it looks like more will arrive in an update, judging from the legend top-right...

With every contact, bits of the cars fly off and damage is semi-realistic (though you keep driving) - it's great fun and Demolition Derby Multiplayer UWP keeps the pace up (again literally) through super smooth frame rates, control response and - most importantly - quick loading levels and menus. There's nothing more of a buzz kill than sitting waiting 30 seconds just to get back to the menu in some ambitious games, but here it's only a second or two and you never get a chance to get bored before it's straight back into the fray for another derby and plenty more wreckage.

This new UWP multiplayer version of Demolition Derby: Crash Racing is a winner. Zap the ads with a small IAP and let's reward the developers for a job well done. More like this for Windows 10, please... 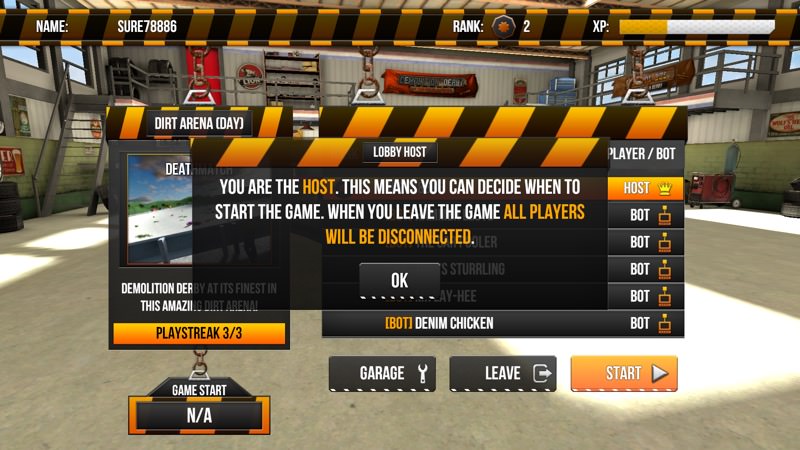