Review: Fitbit Versa (part 2 - what works and what doesn't)

Last week, I unpacked and set up the Fitbit Versa, one of the remaining smartwatches with 'full' Windows 10 Mobile support. All went pretty well, though there were some questions about detailed functionality and logging. With a few more days of real world use under my belt (on the IDOL 4 Pro), here's my review of what works... and what doesn't. 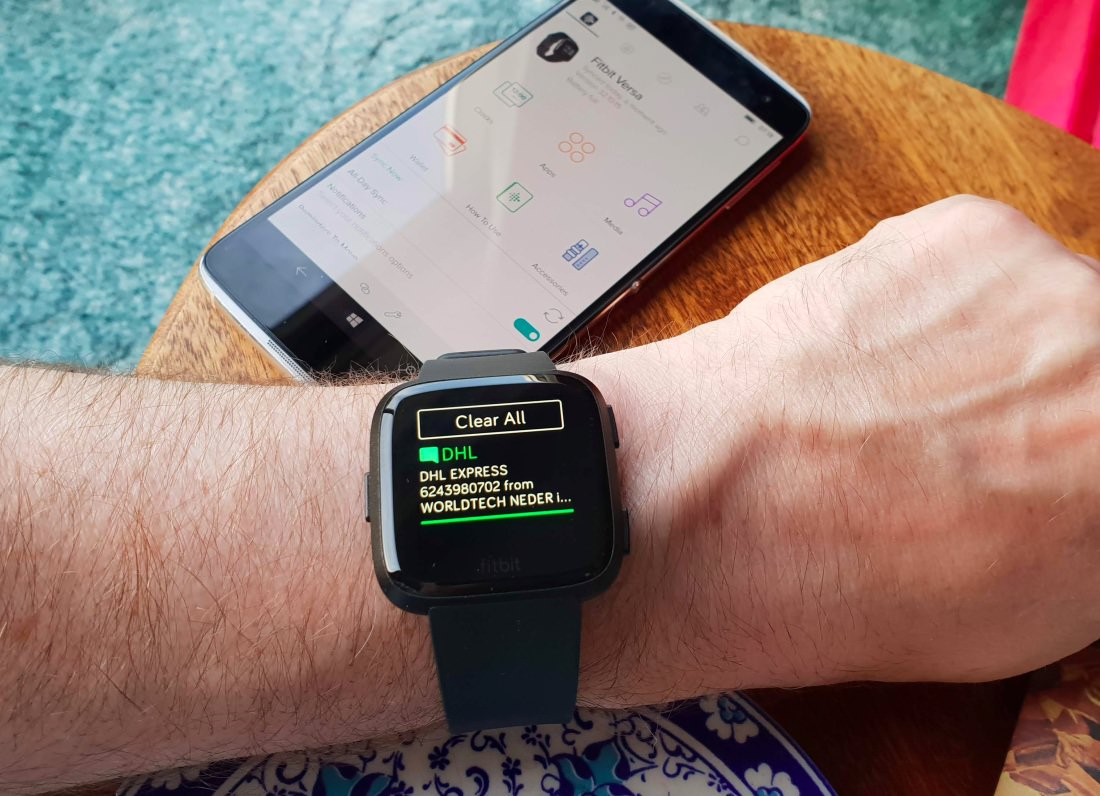 I realise that getting two bits of technology to work together with 100% functionality is probably asking too much - iOS and Android users have glitches too - and I'd class this Fitbit Versa at operating at about 90% functionality with Windows 10 Mobile phones - with the deficit mainly to do with Fitbit Wallet not being available for most UK banks (yet).

I have zero complaints about the Versa's form or fit and finish - it's really well made and the screen is abundantly clear, even outside in the brightest summer sun: 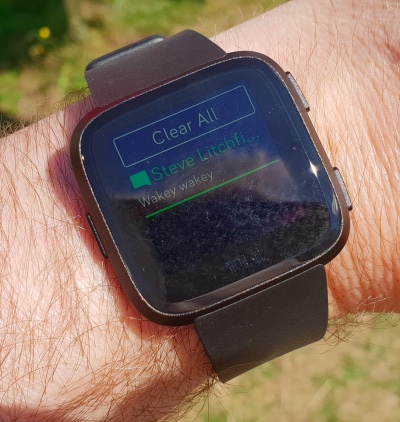 With default brightness, I was getting a good two days per charge - short of the 3+ days advertised, but I think my use would settle down in time. You certainly don't need to charge every night. The biggest power drain is when streaming music to my Bluetooth headphones though, so the exception to the multi-day rule might be if you went on a 6 hour hike with music in your ears the whole time. Still, I was impressed overall, even if battery life wasn't close to my old Pebble, which I once got up to 12 days on a single charge! (Admittedly that was monochrome and far less ambitious, though it's worth mentioning the Pebble since Fitbit bought the company and incorporated some of its ideas and philosophy.)

I know that some smartwatches have dallied with circular designs, but in terms of screen area and maximum information a square screen is the way to go, exemplified by the Apple Watch variants. And the Versa is simply perfect in this regard - it's attractive, clear, not too large, not too small. I did plump for the longer of the two straps in the end, finding it more comfortable and not having to have to crank the strap up too tight. 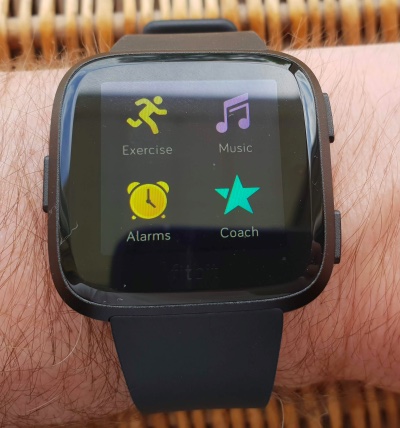 I did notice, belatedly, that the Versa is offered in 'Small' And 'Large' variants - and I have no idea how these compare to the 'Unisex' version that I bought. All a little confusing, so I'd suggest you check the smart watch out in a shop before buying. Or just play safe and get the one I got (see the link above), since my wrists are 100% average (for a man) and I had no issues.

Crucial to the Versa being able to continuously monitor a user's pulse are the sensors on the back and the strap design is angled such that the watch is always pulled securely onto the wrist. If the connection does get broken, perhaps because you're adjusting it, it doesn't really matter, the only downside is that you then have to put in your PIN number into the UI on the Versa's screen. Which only takes a couple of seconds. And, obviously, all the while it's on your wrist and hooked up to your living skin then it's kept unlocked and fully functional.

The Fitbit Versa is rated down to 50m in water, which is impressive. I took it for a swim and it tracked lengths and timings perfectly. Curiously there's no pulse tracking when in the water - I'm guessing the sensor can't get an accurate reading from your skin when there's water leaking between. You also can't accurately stop and start swims as capacitive touchscreens don't work when wet. So I started the swim manually before jumping in and then dried off the watch face afterwards to stop tracking. 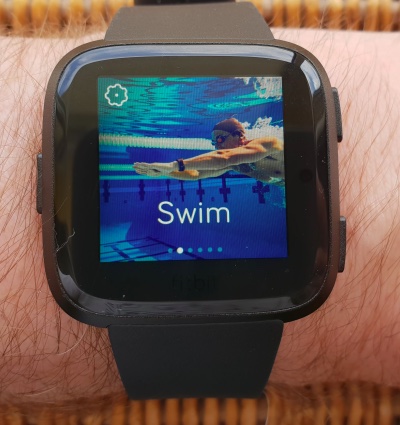 On the watch screen itself, there are a variety of watch faces (selected as part of set-up, but you can switch at any time from the phone companion app). My pick was one that included steps and pulse rate, but your mileage will vary. The screen usually powers on when you rotate your wrist to see the display - if it doesn't then a press on the main left hand button will do so. This button also acts as 'back' in the main UI.

A swipe to the left (i.e. the UI elements hiding off to the right) shows the Versa applications and shortcuts. I couldn't see a way to re-order these, but as you're unlikely to have more than a dozen and as they're shown four at a time, you're never far from what you need: 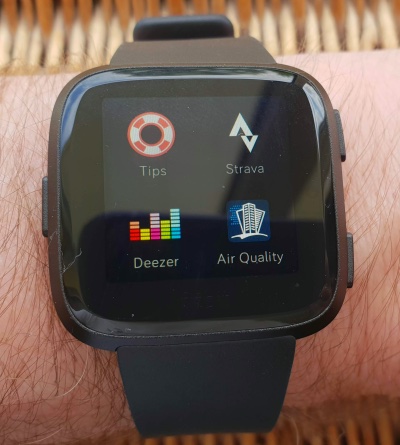 The right hand side hardware buttons kick off Exercise mode (from where you swipe to choose which exercise - and yes, these can be selected and re-ordered from the companion app under Windows 10 Mobile, as shown below) and Alarms, respectively, in theory the two most common things you'd want to do on the Versa. 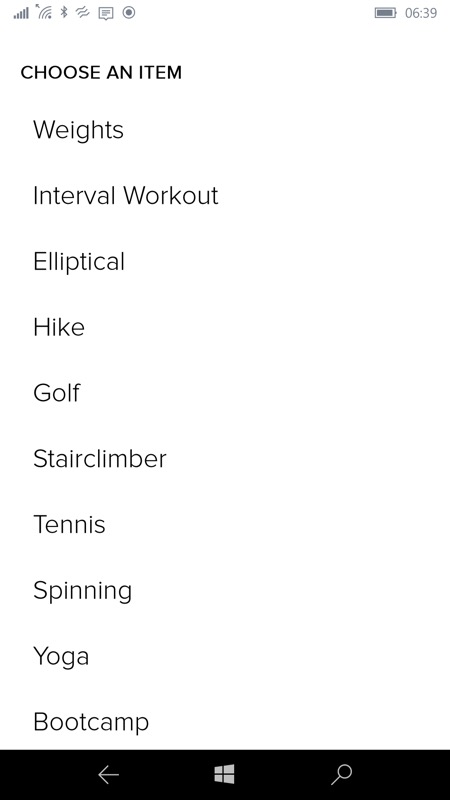 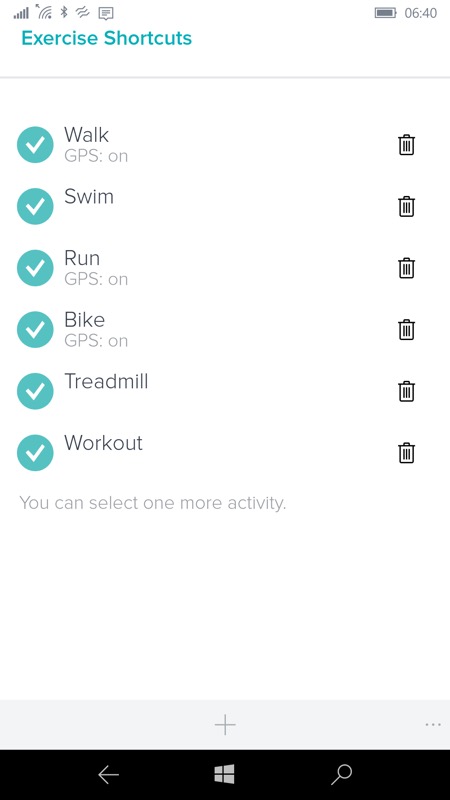 Leaving some of the features for the next section below, a Coach app leads you through a number of training sequences, while a Relax mode does the same but for relaxation, relying on monitoring your breathing and pulse. Weather is as it sounds and worked a few times, but for the vast majority of my Versa review time it just showed blank details and a message to 'sync to update'. I synced over and over again and nothing appeared, so consider the Weather feature broken: 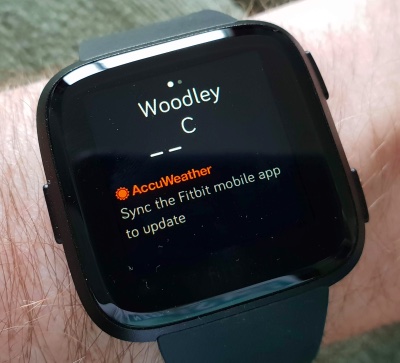 There's also a Stopwatch 'Timer' (which is very basic, not even having a 'lap' facility', sadly) and then you're into third party Fitbit Versa apps, each of which is installed (and updated) from the companion phone utility. I played with Strava (for running), Deezer (music), Air Quality, Uber, Tennis (though my tennis strokes weren't auto-detected - maybe I'm not physical enough!) and - most useful of all - Flashlight, where the display is lit in white at maximum brightness.

Where the rubber hits the road though is how all of this integrates with tracking, logging and other functions on the phone. In detail, I'll run through the Versa's functions one by one, evaluating them through the lens of the Fitbit UWP. Note that I won't go into too much detail about the application itself, since anyone can play with that for free, and for any data source:

Credit has to be given to Fitbit in that there is still a (mainly) working, regularly updated UWP application for Windows 10. It could well be that this is mainly due to the need to keep its trackers up to date in the wider Windows 10 world and that Windows 10 Mobile is getting the tail end of that work. But still, The Fitbit Versa and W10M do play fairly nicely together.

But not perfectly, and that's perhaps the source of my discontent with the whole system. I don't generally like wearing watches of any kind, so any wrist-mounted solution has to show obvious and significant benefits to my life. The fitness elements here do bring these, it's true. I swim, I power walk, I occasionally run, I occasionally hike, and all of these are beautifully catered for and tracked.

If... I remember to set the appropriate activity on the Versa and then remember to stop tracking at the end - it's surprisingly easy to forget and galling when, halfway round a 3 mile circuit, to remember that you've forgotten to set tracking going. In theory, there's auto-detection for these activities, but in a week of testing, only one walk was auto-tracked, the rest were ignored (though counted as 'steps' in the daily routine, of course).

But once into the habit, the fitness side of things does work - and is tracked, logged and analysed in the Fitbit UWP application. And this all may be enough for you. But I did like the idea of Pebble-like phone push notifications - when driving, for example, if my Lumia is in a pocket then I'd like to see incoming texts on my wrist (especially if they're things that don't need replies, such as 'I'll meet you at 11' or 'Got there safely, thanks'). And again, while these usually worked, they weren't 100% reliable. And, crucially, for me at least, there was no support for the likes of Twitter/Tweetium DMs, which are perhaps the most time sensitive way that people contact me now. And the process to enable other Windows 10 Mobile notifications needs a lot of streamlining.

Then there were also multiple occasions when the Versa and IDOL 4 Pro refused to talk to each other until I'd turned one of the devices off and on again. Once a day, on average. I'm loathe to blame the Versa too much here, since it's just as likely that something dodgy in W10M or the Alcatel Bluetooth or Wifi firmware was at fault. But worth mentioning.

So a positive verdict overall, but with caveats right left and centre. Of course, if you just want the fitness tracking then you might like one of the smaller and cheaper Fitbit trackers - I've used the tiny 'One' for the last two years with great results. But the Versa is lovely, and the screen is super-clear in all light conditions. And there is potential, not least for Fitbit Pay and paying for things with your smartwatch - if supported where you are.

PS. Data points welcomed from readers - have you tried the Versa or its bigger brother, the Ionic, with Windows 10 Mobile? How did you get on?