The story so far: Facebook had a MS-written client for WP8.1 and all was well. Then Windows 10 Mobile came along and Facebook built its official application on the OSMeta middleware, meaning that the client was slow and heavy on resources. So the canny W10M phone user just used the Facebook web site. Until last week, when this stopped working well in Edge (everyone got served the ultra 'basic' version of content). Making this the perfect time to look at third party Facebook client, LightSocial Pro UWP.

NB: Of course, we also know about SlimSocial, which does much the same job - and for free (with donations) - but this is subtly different it's worth trying both and then settling on the one that suits you best. And comments welcome in comparing the two!

NB2: LightSocial is also available for Windows Phone 8.1, should you have an older phone on the older OS.

The idea here (as with SlimSocial) is to grab content from the full Facebook site in real time and re-render it on the fly, stripping out the essential Facebook interactive features rubbish and giving you the content you actually wanted. The feel is halfway between that of the old mobile web site (before it stopped working properly) and a native client. But it's patently faster and more efficient than the official Facebook application, plus (again as with SlimSocial) there's the wonderful option to have a (mostly) dark theme, making Facebook easier on the eyes and more battery efficient on phones with AMOLED screens. 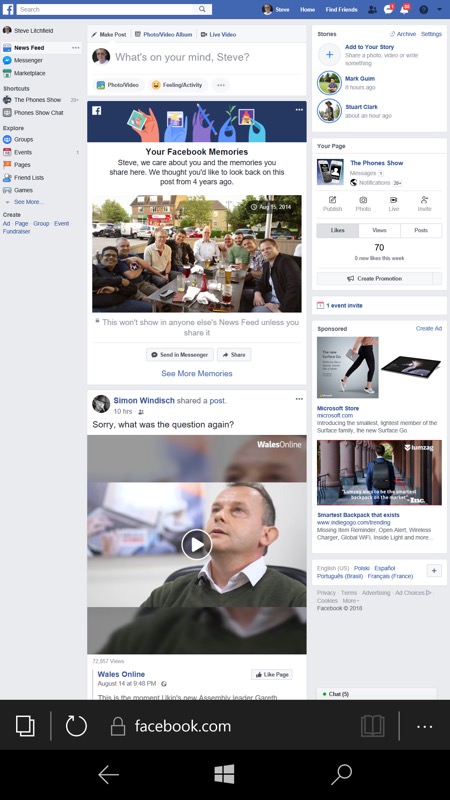 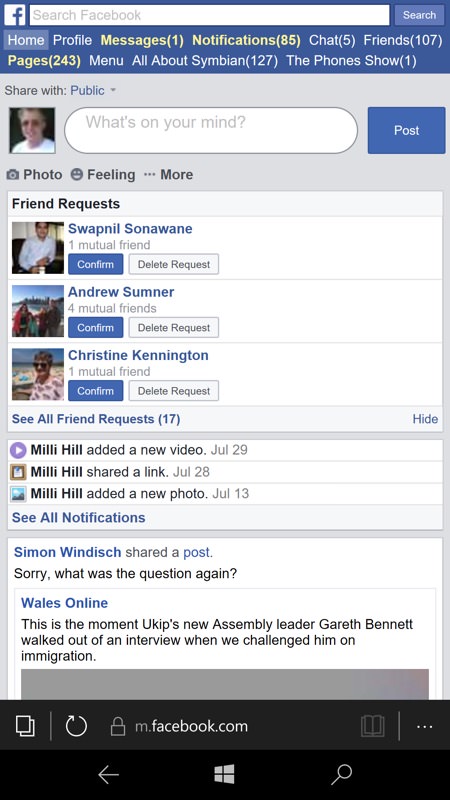 The basic problem. In Edge, you have to live with the tiny-fonted desktop version of Facebook or the ultra-minimalist 'low bandwidth' version. Not that the latter isn't a good idea, but it goes a bit too far and has also a white background. 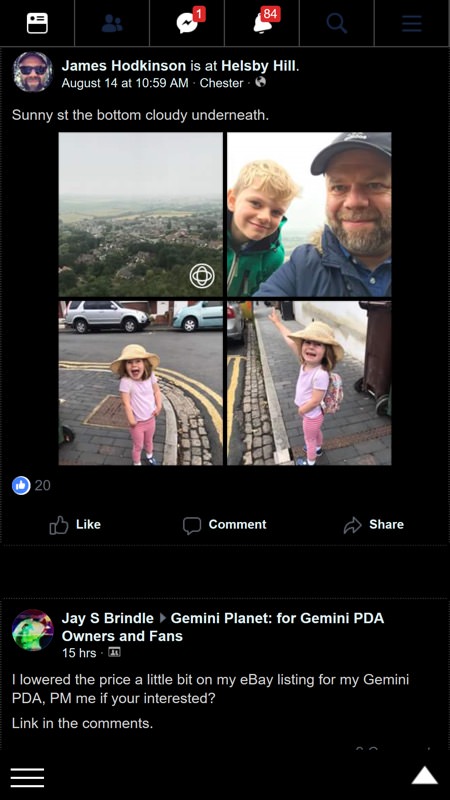 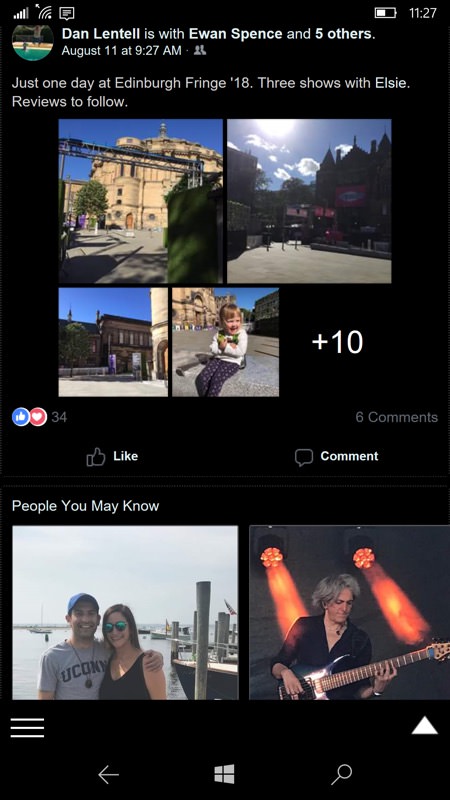 LightSocial gives a sensibly balanced Facebook experience with dark theme, as shown here. There's also an option for 'full screen', shown on the left, with no Windows navigation controls, but as there's no 'back' control in the LightSocial 'bar' then you really need the Windows controls too. (Note that SlimSocial does this better, with 'back' in its toolbar.) 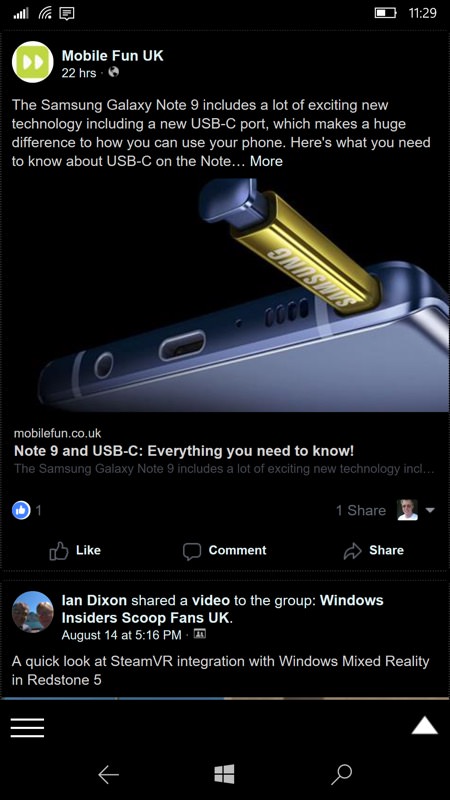 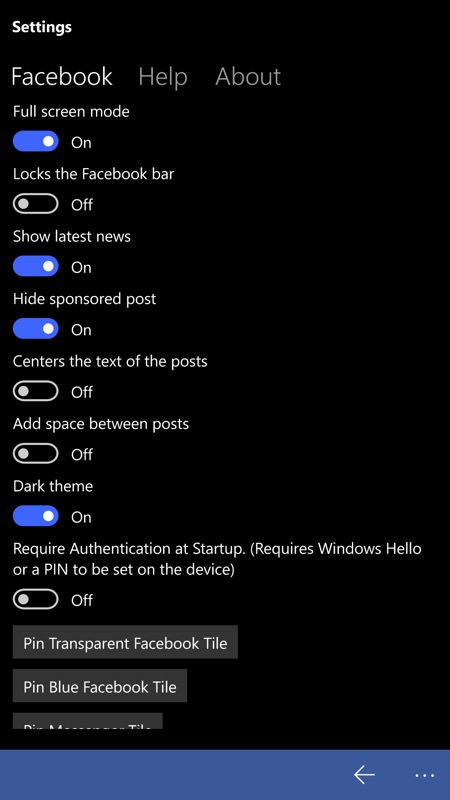 Essentially it's browse and enjoy, with sensible defaults. (right) The Settings available, similar to those in SlimSocial but with more live tile options and support for Windows Hello, should you want to protect access to Facebook (e.g. if your child picks up your phone). 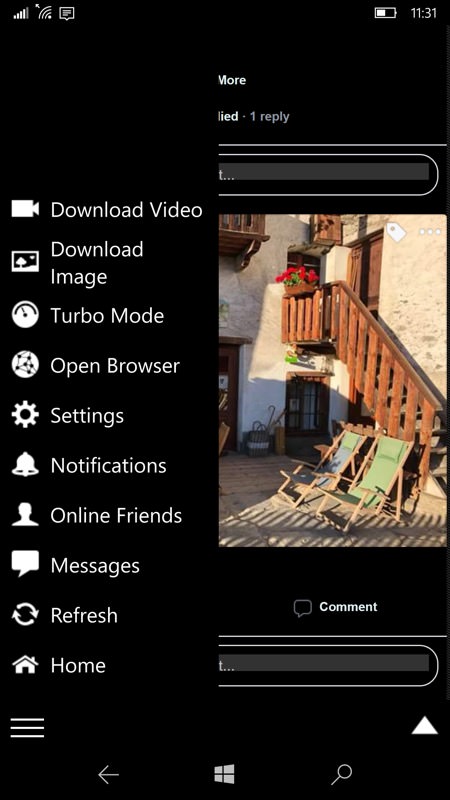 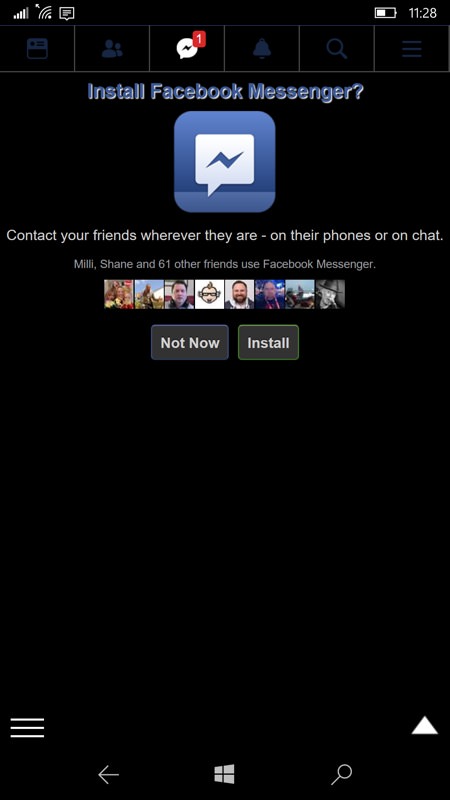 The full hamburger menu, though not all the options pan out. For example (right) the 'Messages' function just goes to this unhelpful message in Facebook, while 'Open Browser' takes you to one of the same two problematic views that we started with, ditto 'Turbo mode', which just forces on the ultra-basic Facebook feed. 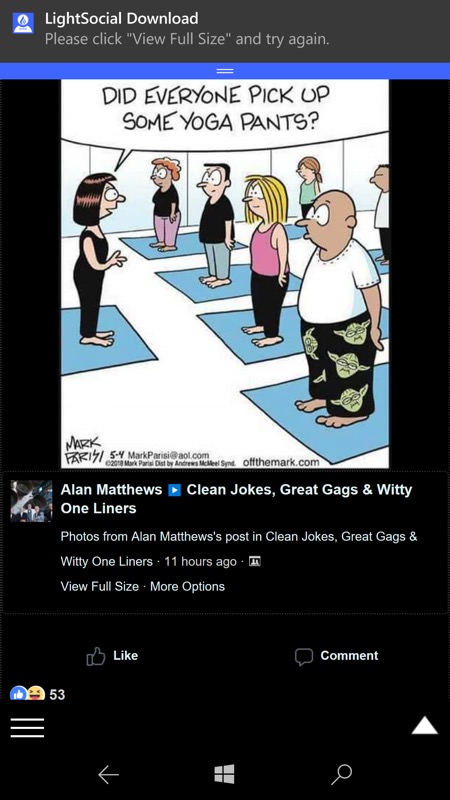 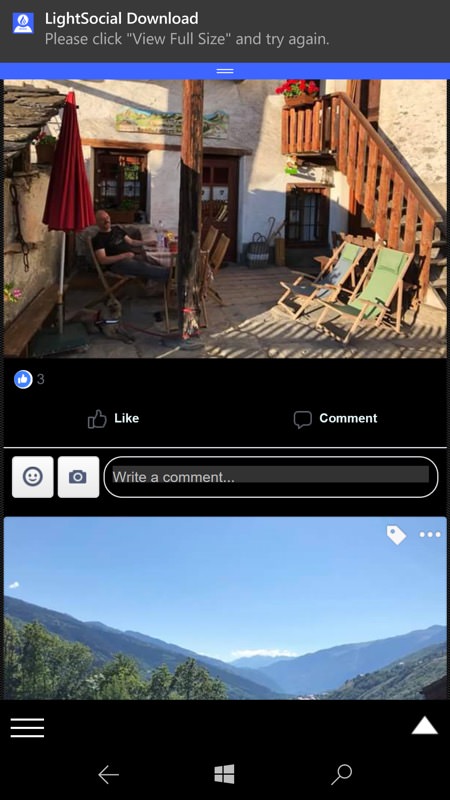 There's image and video downloading, though support is patchy - if Facebook itself offers 'View full size' then LightSocial knows what to grab (via the hamburger menu function), but sometimes (as above right) this isn't offered so you're then out of luck. (I guess you could grab a screenshot and then crop, but that might be lower resolution?)

On balance, I prefer SlimSocial to LightSocial, but there's not much in it. Neither system is super-snappy at loading pages in the first place, but then you have to remember that it's Facebook serving up bloated content in the background and the apps are having to work hard to strip out just what you need.

Well worth a look, anyway, in your efforts to avoid the full-strength, RAM-heavy official client.

PS. There's also an ad-supported version that's a free download, but when just a dollar/pound is enough to never see ads, I don't see why you shouldn't just go to the full Pro version linked.