Following on from the first part of my main review of this relevant ultra-mobile computing device, part 2, concentrating on the Type Cover and the laptop experience, and part 3, covering the particular 'S mode' default configuration of the Surface Go and comments on performance in daily use, here's part 4, looking at imaging. Yes, imaging on a tablet - but not just any old tablet. The Go is light enough and portable enough that any imaging potential is well worth exploring, even if it's not going to be your primary shooter.

At some stage, at an event, we've all been behind someone taking photos or video with a tablet, usually an iPad, cursing them for blocking more of our view than is strictly necessary. And I'd hate to turn any AAWP readers into that 'someone', but it's also worth exploring how good the front and rear cameras are on the Surface Go since the tablet is - at half a kilo only - genuinely portable in terms of taking it everywhere. Maybe not in a pocket, but certainly in any bag or rucksack.

There's one gotcha that you'll need to address before going any further, mind you - the oleophobic screen is slippery (on purpose), but that does mean that it's hard to grip the Go in order to take a photo or video with one hand. On a phone, a pincer grip spans the display's width and it's trivial to hold in place - not so much the larger Surface Go, so either a chunky case (which defeats the point of mobility) or a two handed grip is needed. Not a showstopper, but worth noting - you can't use the Go's camera to stand in for a worse camera in a budget cellphone in terms of daily use. But you can use the twin cameras here when needed, with some confidence in decent results.

The rear camera, with microphone hole...

Interestingly, the two cameras are different specs - you expect this on a phone, but with more space available and more emphasis on the front camera generally here, I'd have expected Microsoft to just order '2 off' whatever they decided on. Anyway, I've been doing a lot of digging into the internals of the Surface Go and here are the raw camera specs you need:

So, on the face of it, the rear camera is best for stills and the front camera best for video, which sounds about right for the Surface Go's use cases, to be fair.

Shooting in both these maximum resolutions and occasionally in the 16:9 cropped versions (e.g. 6MP for the rear camera), here are some samples in various light conditions. In each case, click/tap the image to grab a full resolution version. See the comments below each photo, as appropriate. 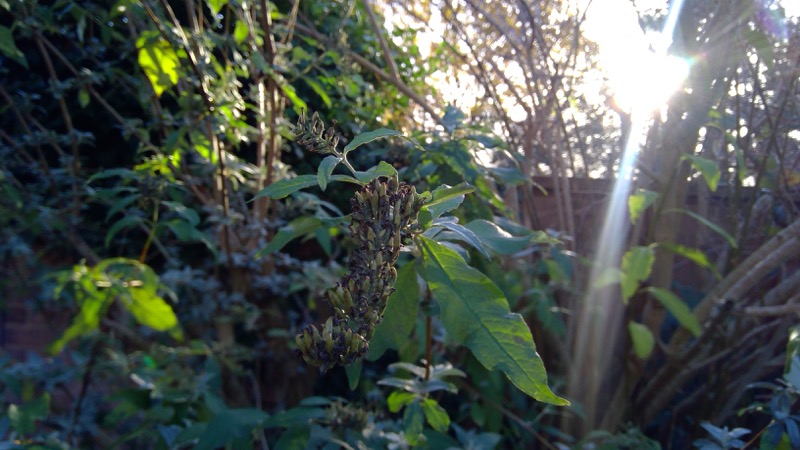 Here shooting into the winter sun, but the Go's main camera did pretty well, even the lens flair looks arty. See below for a 1:1 crop: 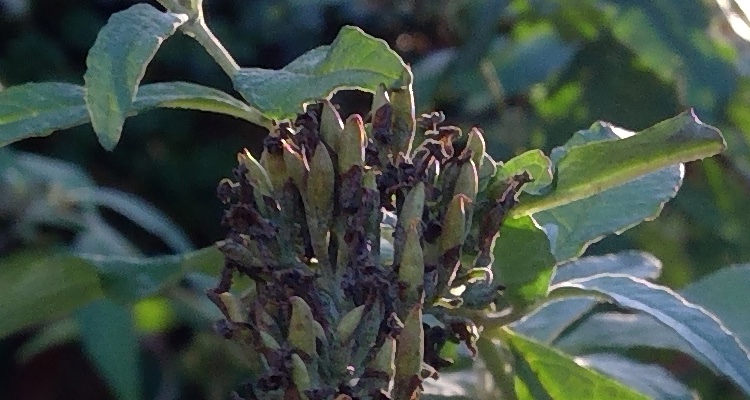 The lack of colour here is because it's winter, of course, but I was impressed by the detail, which isn't horribly sharpened or processed, unlike on some smartphone flagship cameras i could mention...(!) 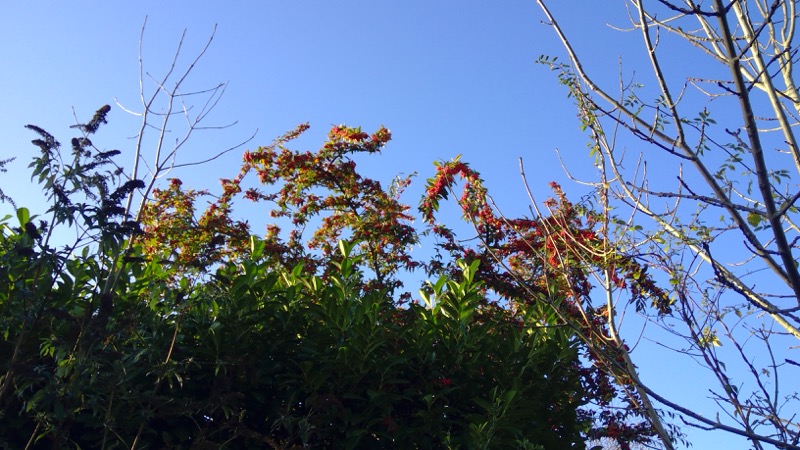 About the only colour I could find at short notice shot against a blue winter sky. See below for a 1:1 crop: 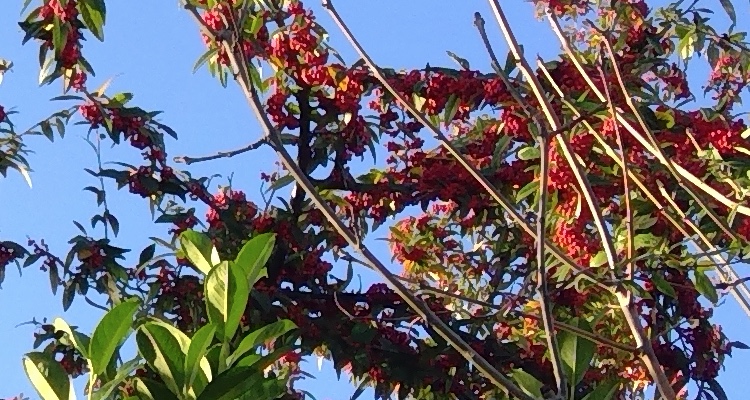 A few artefacts here and there, but not terrible, as tablet cameras can be. A good casual snapper. 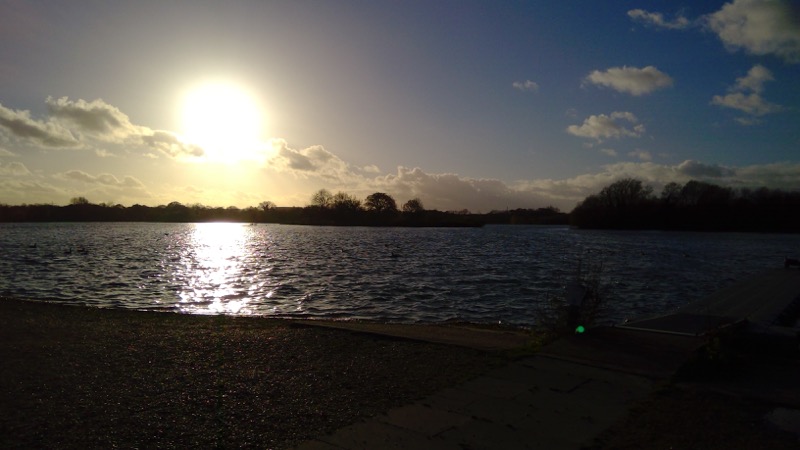 Like many Windows 10 devices that aren't Lumias, there's no auto-HDR. Instead it's a manual toggle in the UI, though results aren't brilliant, there's precious little HDR here, for example. See below for a 1:1 crop: 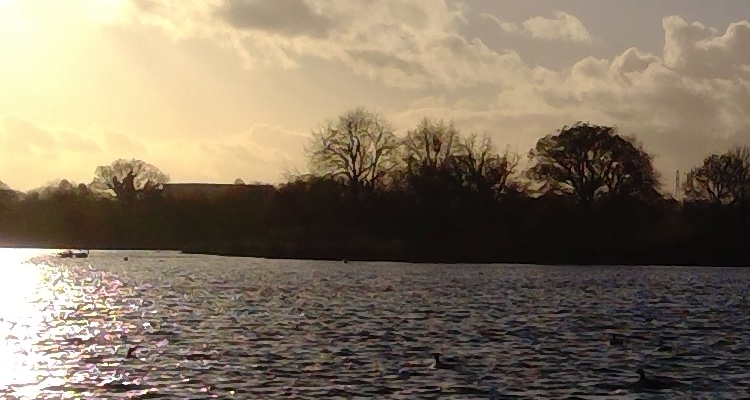 Although the HDR aspect didn't work out, look at the branch detail on the distant trees - a sign that images are relatively natural and not over-sharpened, which is good. 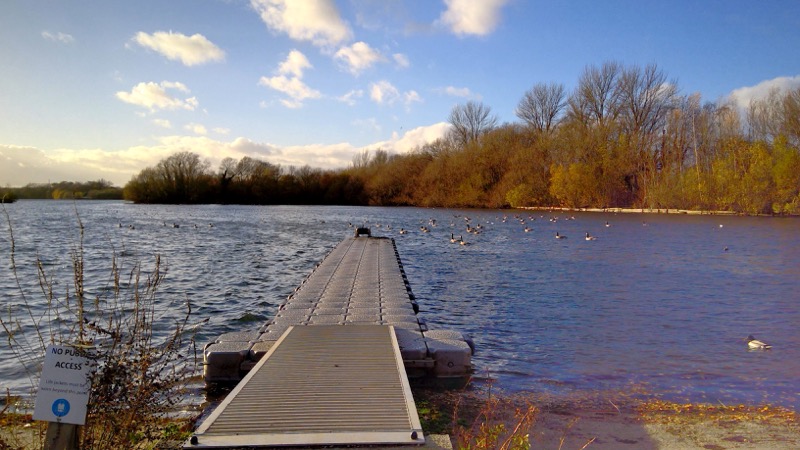 Another good Go photo sample. See below for a 1:1 crop: 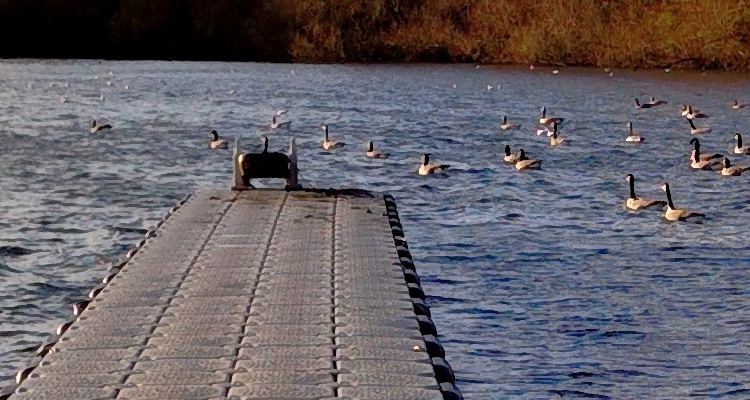 The sheer mass of detail is overwhelming the image processing a bit, but as a casual image it's not at all bad, I'd say level with phone flagship cameras from a couple of years ago (Lumias excepted)... 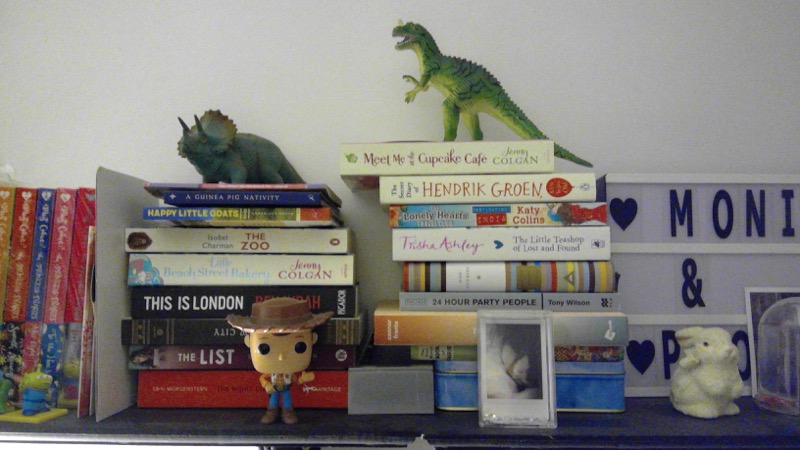 A bookshelf from my daughter's room in very low light with curtains closed - it was darker than this makes it look. See below for a 1:1 crop: 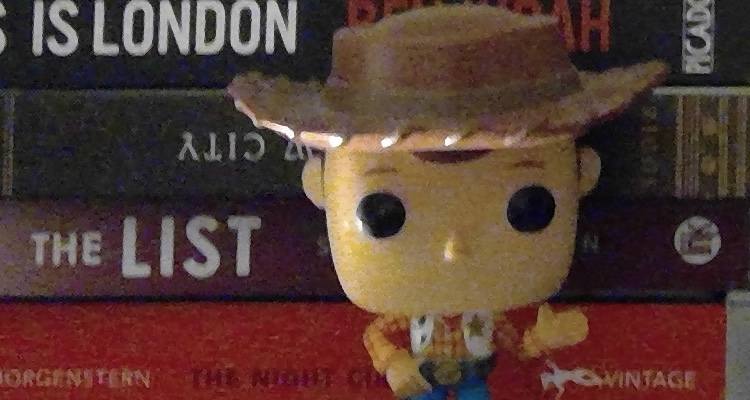 The limitations of the comparatively small, mid-range sensor and lack of OIS start to show in low light, with plenty of noise and artefacts here. Borderling unusable, unless you just want to post a snap on Facebook or Twitter, I think. 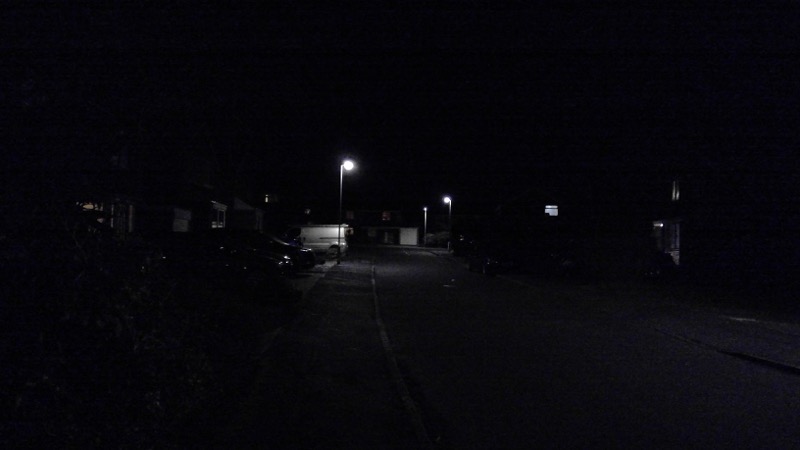 My standard dead of night test and, without OIS or multi-frame technology, the Go's camera is unable to cope. See below for a 1:1 crop: 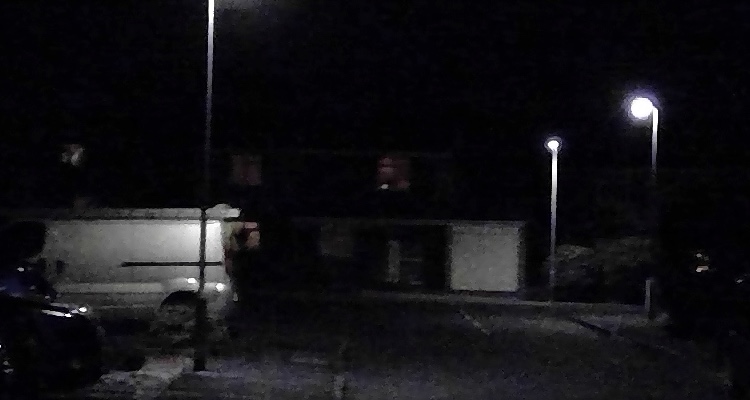 Noticeable is the lack of any colour at all - mimicking the human eyes, perhaps (cones/rods etc.)? Loads of noise and artefacts, but in fairness I can't see anyone really shooting very low light snaps on their Surface Go tablet!

Of course, in real world use, it's just as likely that you'll use the Surface Go's cameras within applications, here are some examples that I've tried out:

I'm sure you can think of your own example uses. Having a couple of good cameras on an ultra-portable PC turns out to be remarkably useful! 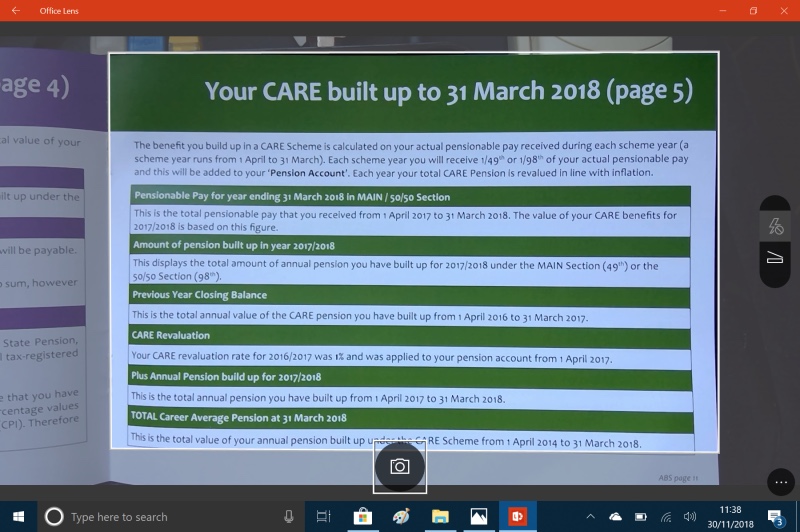 Scanning in a document page in Office Lens UWP on the Surface Go... 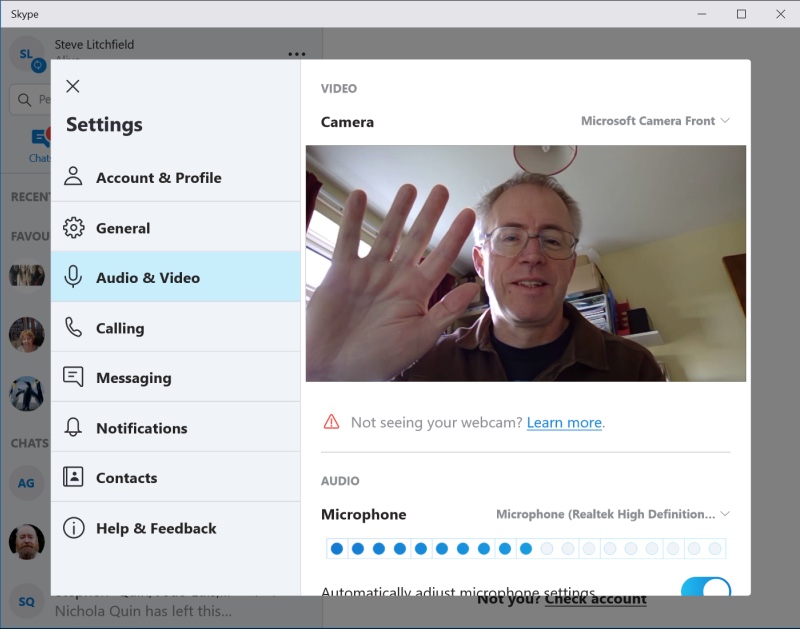 Skype is a doddle, as you'd expect, with the front camera well optimised for great video.

Here are samples from the rear and front cameras, the former in daylight (a typical use case as a phone camera stand-in) and the latter indoors (typical for a Skype call, or similar). Note that you can't switch cameras halfway through a video recording - although the UI lets you do this, the file gets stopped at the first camera switch, which is a shame. Or perhaps a bug. Note that I'd shot some lovely lake-based video for the test here, but this bug meant that most of it never got 'saved'. Oh well.

If the OneDrive embedded videos below don't show then see the direct video links here and here.

The footage here is a bit disappointing really. We're so used to larger apertures and sensors on our phones, and usually OIS too - but transpose this attempt to a nice sunny day and a bit of fun video at a family event and I think it would be absolutely fine. You'll look a bit of a plonker for shooting video with a 'tablet' (albeit a small one) but it'll get the job done.

Better results indoors, thanks to the Go being usually still and on a table or similar, and thanks to the front camera being optimised better for video work. Very clear audio too.

The Surface Go's cameras were about as expected, given the specifications - they're a world better than the cameras on the cheapest tablets and laptops, while being at least a notch below results from current smartphones. Look at the use cases outlined above though, and the two cameras are clearly fit for purpose. Given that laptops don't generally have rear cameras and that not all tablets have front cameras, Microsoft has equipped the Go well, covering all bases and with few hiccups in day to day operation - imaging is seamlessly integrated into many daily use cases. 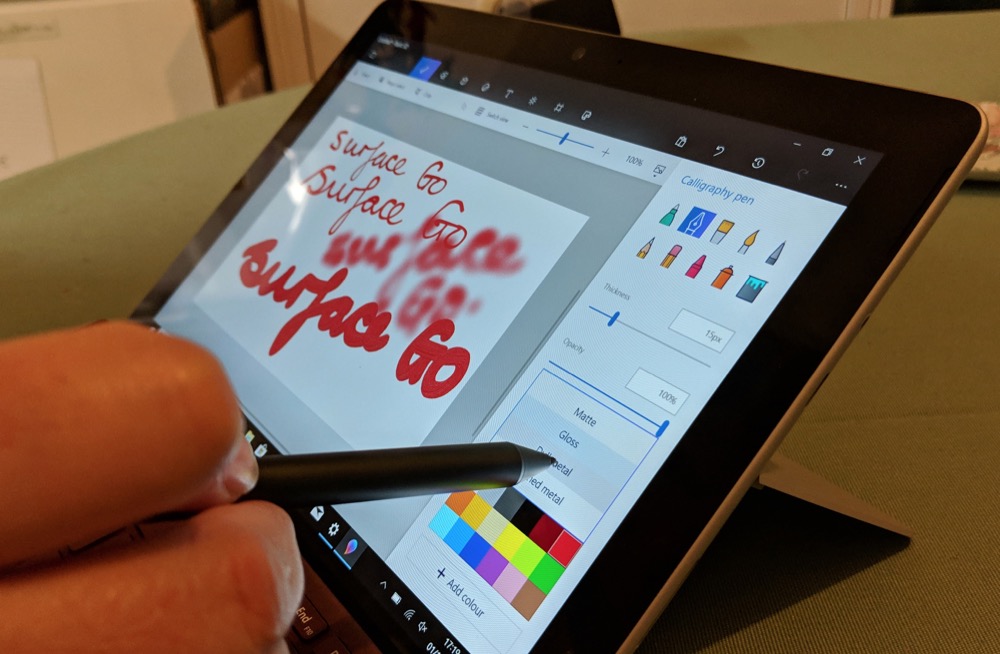