Apple's AirPods have proved very popular in the iPhone world, despite the high price and likelihood of losing one of the earbuds. Principally because of the sheer convenience of having no wires at all. And so we shouldn't be surprised that third parties have stepped in to copy the idea for the Android and (here) Windows phone worlds. Blitzwolf's attempt at this category succeeds on the power front but fails in actually supplying decent audio, sadly. 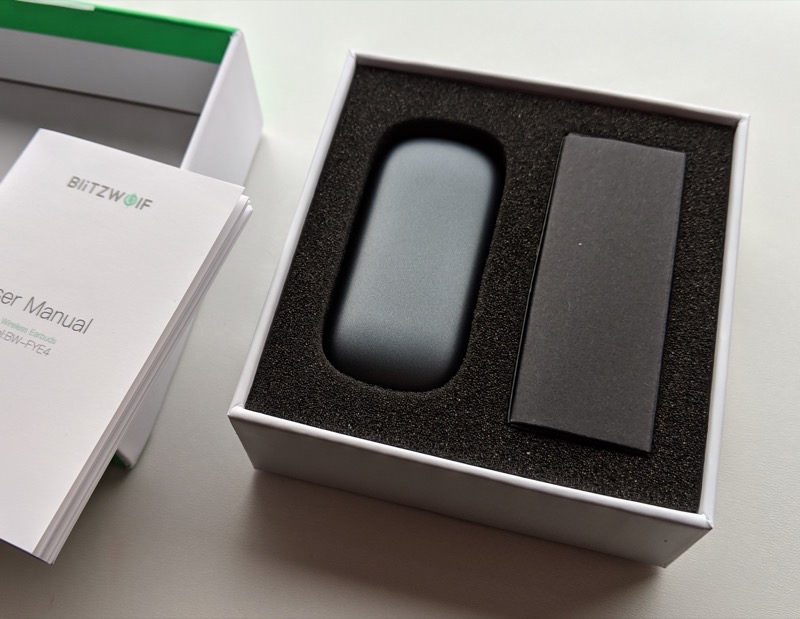 Blitzwolf's design is, of course, a close clone of Apple's system, but that's something for the lawyers to pick apart, I'm not qualified to judge. Ultimately, for me, the BW-FYE4 falls down for the exact same reason that Apple's AirPods fall down, and that's disappointing audio fidelity.

The form factor is identical to Apple's, with a carry case with built-in rechargeable battery, then the two earbuds get charged via pogo pins when they're in the case. A strip of LEDs indicates the case's charge, and a microUSB lead is supplied to top it all off. It's all plastic, of course, at £40, but still pretty well made - and the earbuds fit very snugly into place, helped by little magnets: 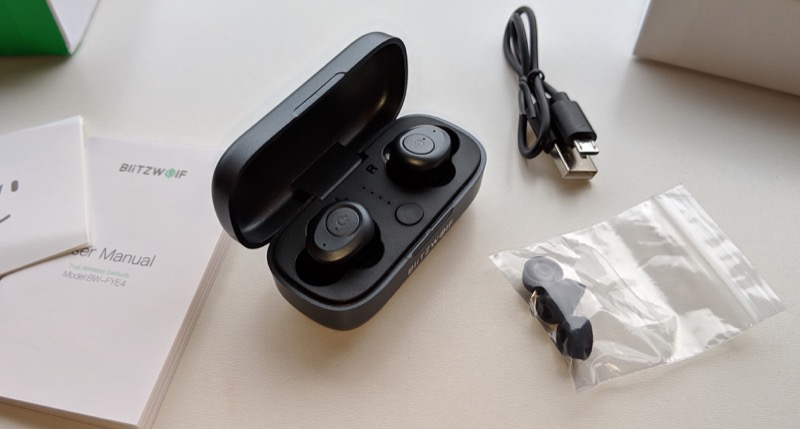 Each earbud has its own battery and charging electronics and this all takes space, meaning that the earbuds are on the large side, even though - as it turns out - the speaker drivers don't benefit.

Three sizes of silicone buds were supplied, I headed for the largest, as usual, to try and make a good fit in my ear canal, but they still weren't quite large enough. Still, the earbuds stayed in place when power walking - though I don't think they'd stand up to a jog: 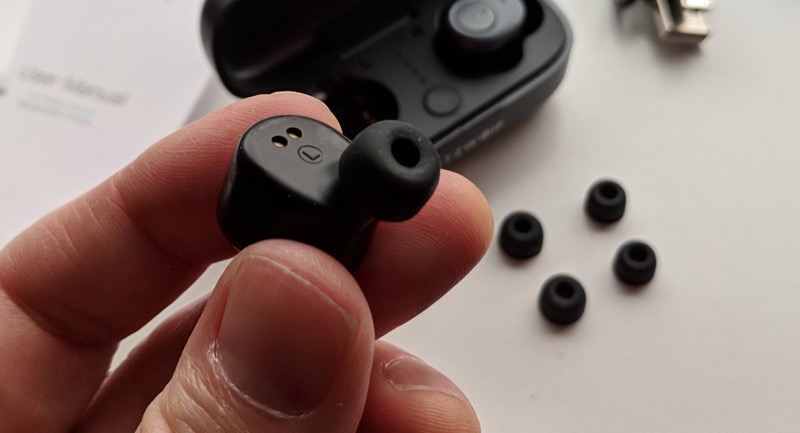 The absence of a trailing cable makes it hard to know exactly which way round to orientate the earbuds, but happily the illustration below (from the manufacturers) shows the 'correct' way. A multi-function button on each earbud allows for play/pause/call pick-up, and then track control via multiple presses: 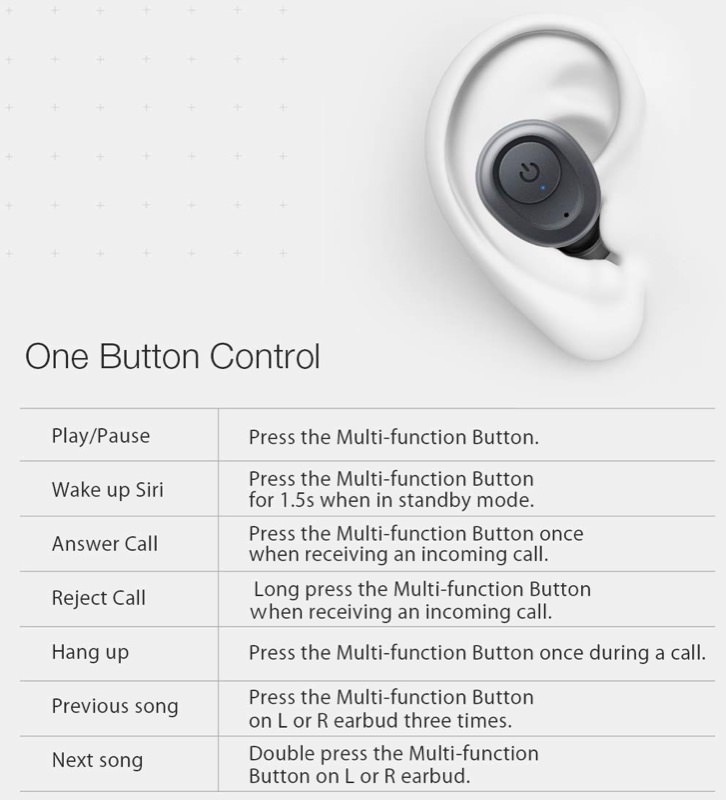 In use, everything works as advertised - there's even logic in the charging circuits to stop jostling of the charging case trying to keep 'topping up' the earbuds over and over again, should the pogo pin connections be broken.

The use of black everywhere makes a logical change from Apple's all-white, though the system is essentially similar. If this is Blitzwolf's 'version 1' for this concept then I'm keen to see what they come up with in 2019. 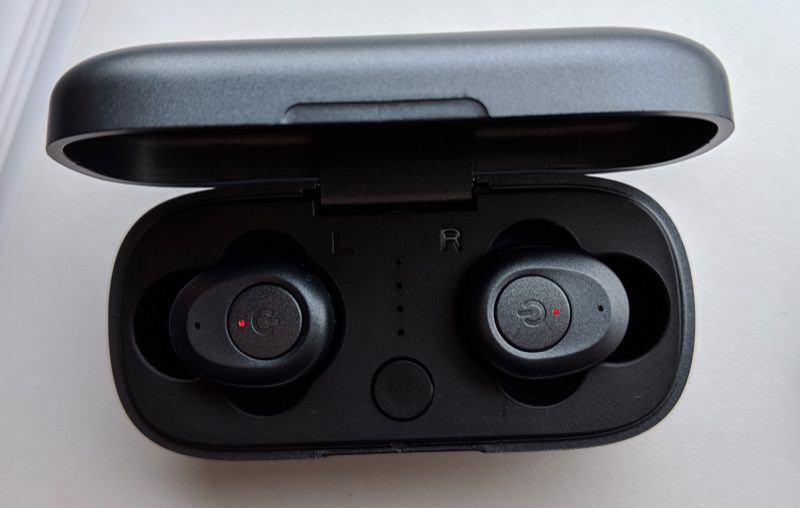 However, unlike the Tribit XFree Color headset, reviewed a week or so ago, the FYE4 earbuds fall down in terms of audio fidelity - we're back in cheap and cheerful territory, with no satisfaction or heft to the bass (not helped by the seal problems mentioned earlier, needing at least one larger silicone size) and with a top end that falls off far too quickly. If you're after something to listen to podcasts then these are fine, but stay away from music if you're even a casual audiophile.

I tested these with both a Lumia 950, running the latest Windows 10 Mobile, and a Pixel 3 XL, running Android 9, and audio results were identical. And disappointing.

It's not clear whether the issue is down to cheap/small speaker drivers or whether it's down to a poor DAC in each earbud - perhaps a little of each. Regardless, there's no 'wow' factor when you listen to music with the FYE4 - audio quality is on a par with the much more expensive Apple Airpods, but that's not saying much. You wouldn't expect a powerful bass experience with an outer-ear design, but I expected a lot more from these, sealed in the ear canal.

The BW-FYE4 are £40 on Amazon UK, which seems a fair price if you're determined to go down the path of individual earbuds and you're not put off by my audio quality comments - you can go even cheaper on Banggood, in China, but then you do have to factor in shipping delays and possible import duty.