Now, I've ranted before about developers pulling greedy tricks in the Store, 'massively discounting' apps and games from unrealistic original 'RRP's to attract attention. And Yellow Elephant here is guilty in the same way, partly by offering silly discounts in the Store (though not as bad as in my original examples) but mainly by producing an application that's so ridden with 'buy-me-now' purchases that it's almost impossible to use. The core idea is to play local music and videos, plus Internet radio and other streams, but save your time (and money) and... Just. Don't. Bother.

[I don't generally publish reviews that I think are going to be so damning, but in this case it's a good example for developers/everyone of what not to do.]

Now, I'm all for developers getting paid and offering a free base product with multiple in-app-purchases to do interesting extra things. For example, with a media player like this, I'd expect in-app-purchases (going 'Pro') to enable the support of wacky video or audio codecs, or perhaps higher bitrates, to enable premium features like audio effects and custom themes. That would be typical and sensible. And the developer might actually get some users and eventually some money.

Instead, Yellow Elephant here goes for the jugular immediately, presenting a request for a Store authentication within seconds of launching Media Player, along with a barrage of other pop-ups and garish 'buy me' promotions. As often helps here on AAWP, let's go for a walkthrough, so that you get the idea of what I saw: 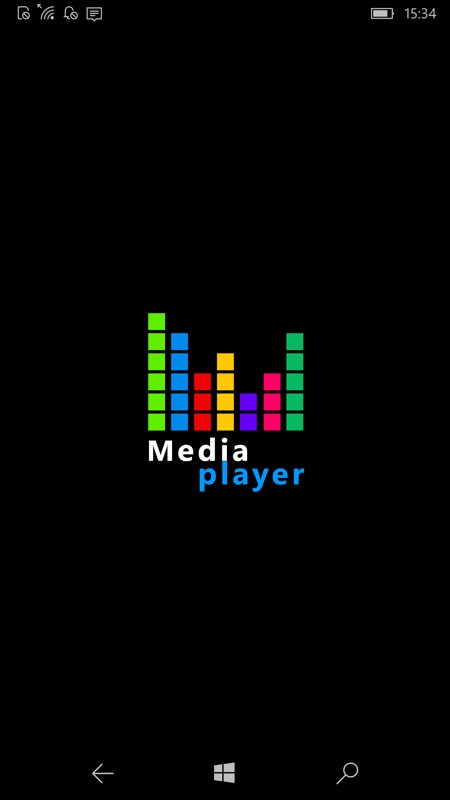 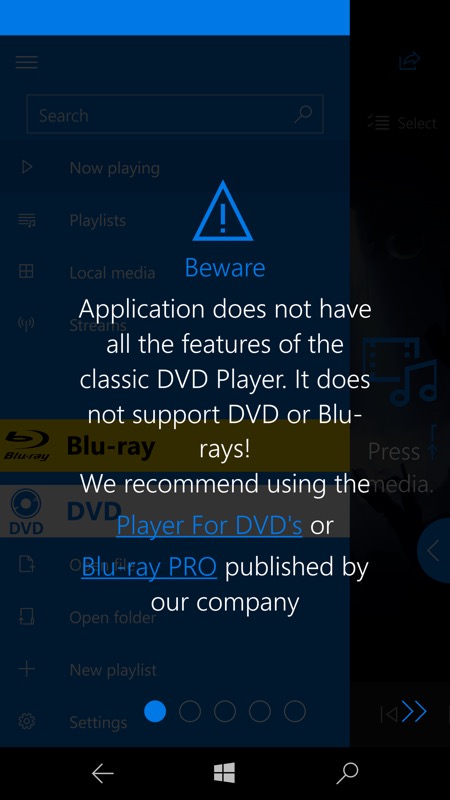 An expected splash screen and a wholly unnecessary tutorial pane - why tell phone users that they can't play DVDs and Blu-rays? I know this is a UWP app, but it's trivial to tell that this is running under W10M. 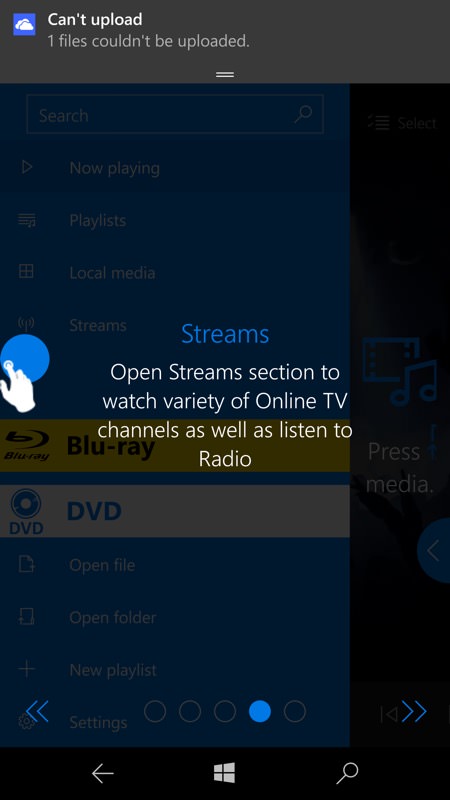 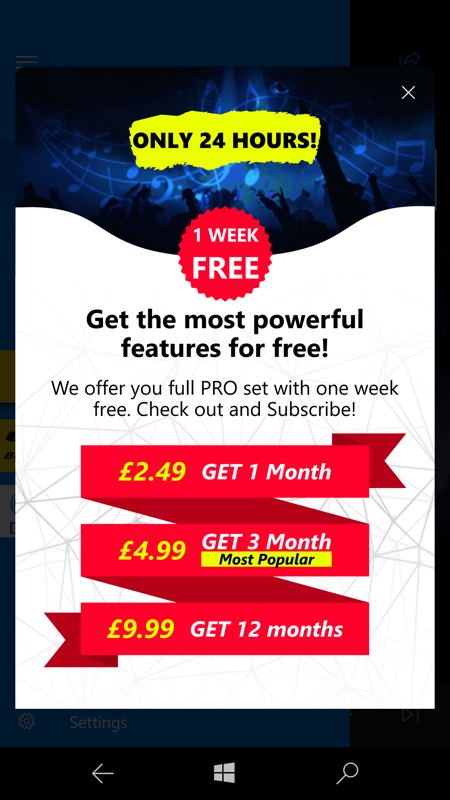 Other than this, the initial tutorial panes are done well, highlighting different UI areas; (right) and then - slam - you're into the first sell attempt. At this stage, the user hasn't done anything, he or she hasn't even see the menu or UI for real, yet they're being pressured. Plus even £10 doesn't buy the application, it's just a license for a year. Which is a bit crazy. Developers, always - always - include a 'buy for all time' option, for users who don't want to be bothered by timed licenses and renewals. 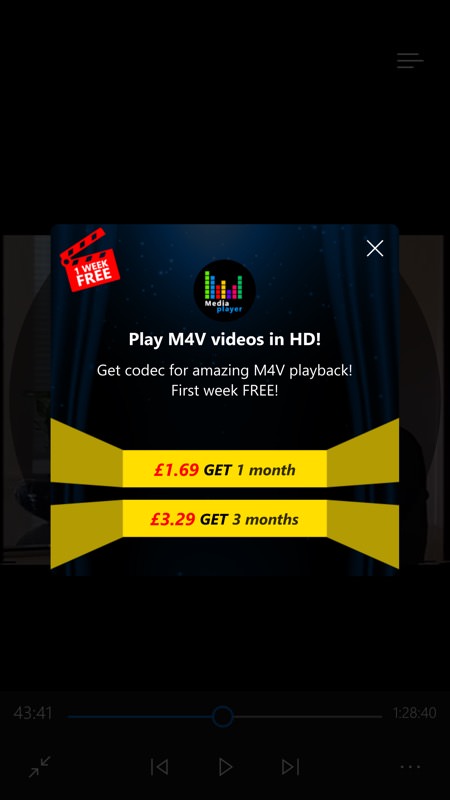 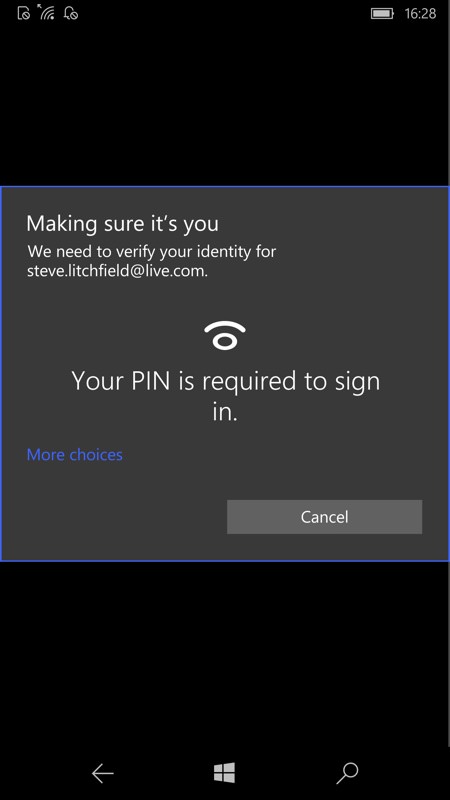 OK, so the first big 'offers' pane has been dismissed. Now you get another one, with different pricing and different 'benefit' - is HD playback included in the aforementioned PRO pack or not? It's not clear. And no, the user STILL hasn't even seen the UI or done anything(!); (right) next, the familiar 'buy something in the Store' Windows Hello authentication screen pops up! What madness is this? We've been subjected to a barrage of offers and ads and now it's asking us to buy... something (it's not clear what) without having done anything in the app yet!! 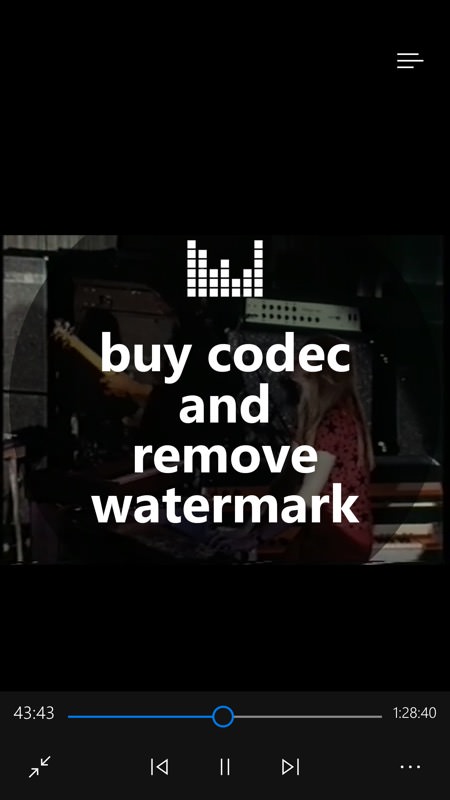 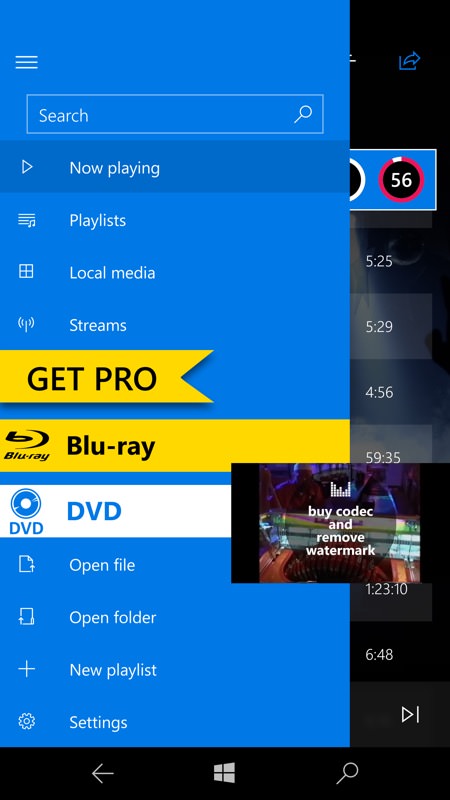 So finally the user gets to the main UI and tries playing music or (here) videos. The videos have a massive visual watermark that implies that Windows 10 Mobile doesn't have the right codec and that it needs to be bought - which is totally untrue in this case, as all my local video files have Windows-friendly codecs; (right) away from the playback (here minimised to a thumbnail), I've brought up the hamburger navigation menu. Oh look, more ads, for PRO mode and for DVD and Plu-ray player applications. At this stage I was screaming internally - none of this is how commercial applications are supposed to behave. 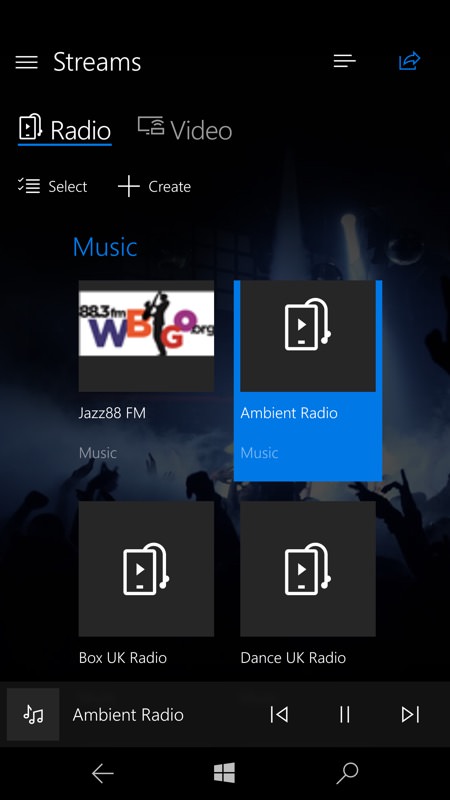 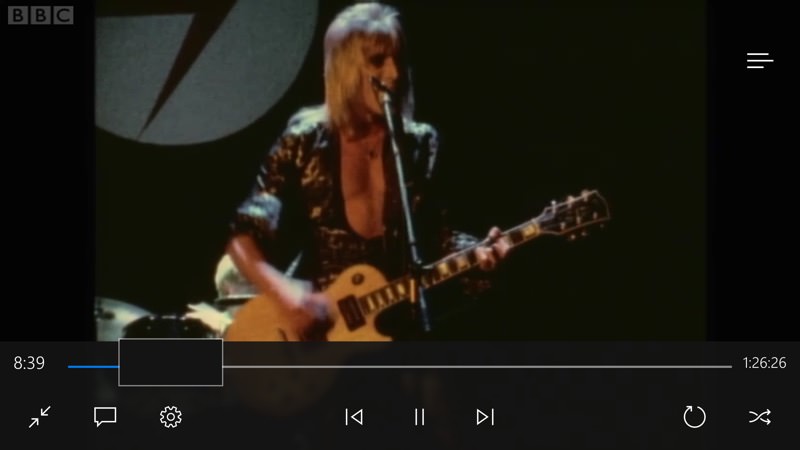 In addition to playing music and videos (the latter of which worked just fine, and I even got round the watermark, even without 'buying the codec'), I also tried the 'Streams' section. This is a very passable Internet radio player, though only a tiny number of stations in the directory have logos/artwork - maybe the developer got bored after the first dozen? (right) the video playback UI, it's all a little bare for a commercial player - not least the Settings 'cog', which, when pressed, pops up a totally blank... something, as shown above. Eh?

In summary, Media Player UWP is a disaster. To put things into perspective, I can already play my local music with Groove Music (yes, yes, it still works just fine), I can already play my local videos in the 'Films & TV' built-in application in Windows 10 Mobile. In short, there's no need for Media Player to exist. Yes, I appreciate that if you accede to the developers ads and buy extra codecs then it's possible that some extra niche videos might be playable (I'm guessing DVD rips?), but for the vast majority of people the Microsoft codecs and software are just fine. And there are far better Internet Radio applications (e.g. here), so this isn't a reason for keeping Media Player around either.

Reviews online class this application as 'exortionware'. And I'd agree. I haven't paid the developer a penny and have just taken one for the team, as it were, in terms of writing all this up. Just avoid.

The very best freemium applications show enough of what they can do that you physically want to reward the developer and 'own' the app for all time. I did this yesterday with an image resizing utility, for example, paying £5.99 for a lifetime 'license'. Fair enough, I'll use it a lot.

Media Player, from Yellow Elephant, here just made me angry....

Comments welcome. Have I missed anything?