Following on from Steve's post last week talking about his Windows Phone 8 live tiles, it's my turn to show off my set-up. Looking over Steve's article, it looks like my start screen is twice as large as his, mostly because Steve has made a conscious decision to stay minimal, while I prefer to have far more activity and links on my screen. It's a layout that has evolved and built up over time, and one that still goes through small changes every week or so. Let's have a closer look.

Much of the basic layout has been carried over from my Windows Phone 7 setup. While the different sizes of tiles can allow for some rather spectacular and irregular layouts, I've stayed with an approach that closely mirrors my Lumia 800 on the Lumia 820. Where it does differ is in the use of the small live tiles, which I tend to reserve for musical albums (in place of the regular Music tile, which has lost a lot of its appeal to me because the new Windows Phone 8 focuses on fonts and moving typography rather than the slowly shifting cover art).

The structure and layout has grown organically since my first Windows Phone handset (an HTC Trophy), and I expect it to keep on changing throughout 2013. Right now there's a distinct feeling of three zones in the screen, with social media and connectivity at the top, games and leisure in the middle, and information and business alerts at the bottom. 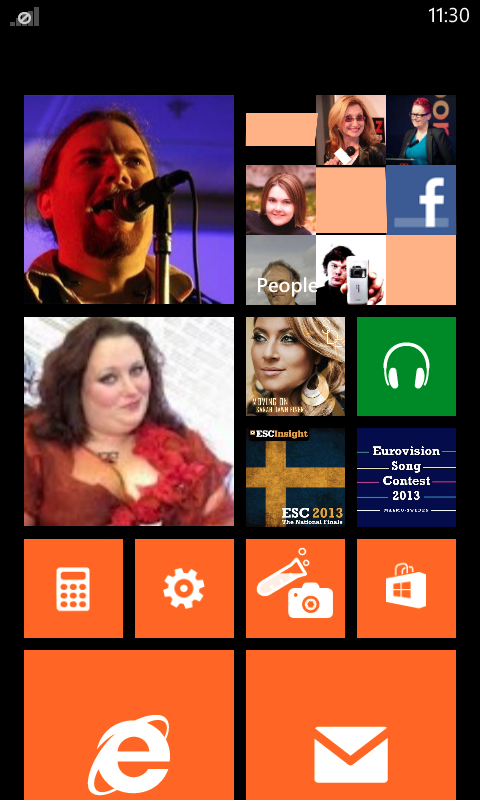 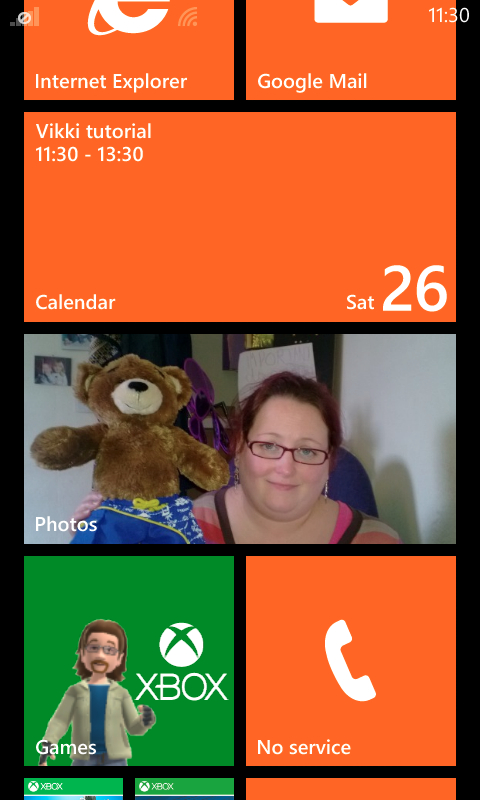 Okay, from the top, I open with the 'Me' tile. Although I can post updates from here, I tend to do so by sharing photos and other attachments from other applications... but I like to check something has posted, so the 'what's new' view is one I tend to see quite often. My wife's tile is next, allowing us to stay easily in touch with each other. Beside these two tiles is the People hub. I still think that a central address book should be accessible on the phone, so this is in one of the fixed positions - top of the tile tree, and just within stretching distance of my thumb. When I jump back to the start screen, muscle memory knows where this tile will be.

On WP7, I had the music tile finishing off this group of four, but as mentioned I'm less enamoured of the tile in WP8 - for a start, it doesn't obey the theme colour, staying on green no matter that I want orange. I still want access to music+video, so I've made it the smallest tile possible, and surround it by some of my go-to albums - the songs that have qualified for the 2013 Eurovision Song Contest, the songs that didn't qualify for the contest, and Swedish singer Sarah Dawn Finer.

What I wanted to do was have Internet Explorer and my Gmail inbox next, but if I do that the dimensions of the screen and live tiles kick in and I can't see another row of tiles, so up comes a row of smaller tiles for some of my most used functions, namely the calculator, the Windows Phone Settings shortcut, and the Windows Phone Store. I also have the photo tweaking app Pictures Lab, which I use more for the cropping and resizing features than the filters and artistic borders.

Breaking up the small and medium tiles are the double width tiles for the calendar and for photos. I like being able to read the full text of the upcoming calendar entry, so this tile serves a double purpose. And much like my wallet, I like having family and personal pictures close by, which brings in another double tile. 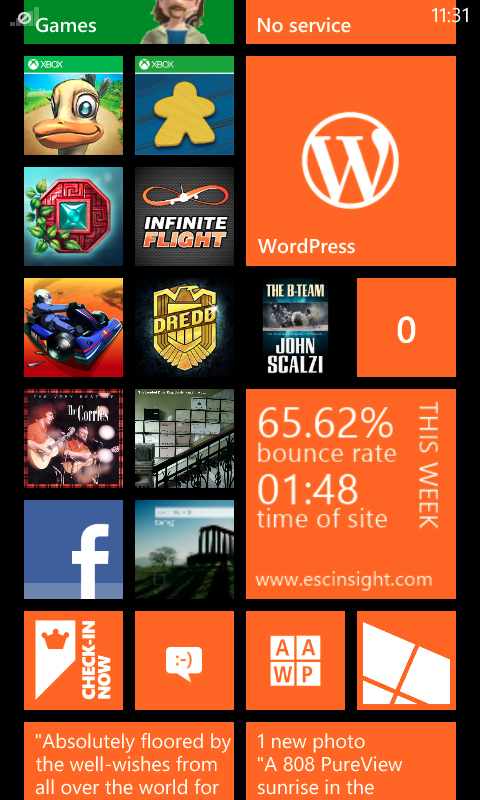 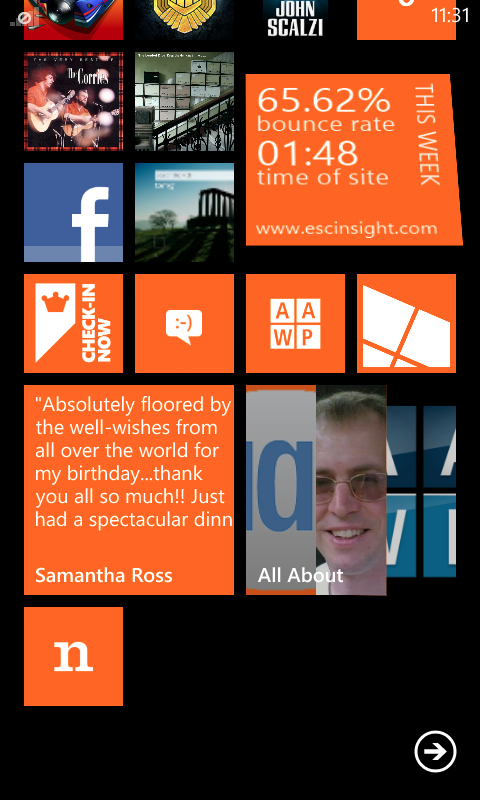 Into the 'fun and games' part of the home screen. Under the main Xbox Live tile are two Xbox titles, here mostly to provide a continuity of colour with the green Xbox Live strip on the icon. Currently this is Farm Frenzy 2, which has got me hooked, and the board game Carcassone, which has been on my home screen since it was launched. This is one of the online multiplayer games that I use, so quick access is nice to check on moves and follow my games.

Under that, two games that I continue to play after many months. The Treasures of Montezuma (by the same developer as Farm Frenzy) is a Bejewelled clone that adds new elements to the game that creates a more frantic arcade style game with some defined end goals to work to; while Infinite Flight is a worthy flight simulator for Windows Phone, and I enjoy hopping between the airports of Southern California - travelling from San Diego to Los Angeles, doing some circuits and landings at a number of regional and local airports along the way... its very calming and stress relieving.

Two more games now, and these tend to be titles that I've recently reviewed and I am still playing. Right now that means Red Bull's mix of advertising and karting, and 2000AD's [Judge] Dredd vs Zombies. Continuing the 'what am I doing right now' is my current book I am reading in the Kindle (right now it's the weekly episode of John Scalzi's "The B Team").

To the right of these, I have two regular sized tiles for blogging, the first is the constantly updated Wordpress client, and the second is a live tile from In The Know, which displays the Google Analytics stats from one of my blogs. This is a great example of a live tile that has deep linking into a specific screen of an application, and providing detailed numbers and information on the live tiles.

Giving these two tiles a little separation, mostly so I can preserve the aesthetic of the small tiles for the albums and games, is Live Tile Countdown, a 'days to go until' application, which points towards my next trip away from home to cover a media conference or music event.

Two more colourful tiles fill out this group. The first is the small Facebook tile, for quick access to the application (it has more features than the People Hub that I use, such as group support). Next to it is a quick link to a specific gallery of images. With so much going on for All About Windows Phone on my phone, this takes me directly to the screenshots folder so I can upload the images to Skydrive as needed (I find that method faster than hooking up my phone to the desktop and taking the photos off the memory that way).

Closing out my live tiles is a another strip of small tiles, specifically the lesser used tiles that I still want to get to without navigating the A-Z list. Forth and Mayor is my Foursquare client of choice, with the main SMS application next to it. Then there are the WP clients for All About Windows Phone and Windows Phone Central.

Two groups from the People Hub are at bottom of the live tiles, with my Eurovision web team on the left, and the All About crew on the right. It's easy to reach out to anyone from these, as well as seeing the latest status updates and social network posts from them all.

And if there are any tiles under that, it's because I'm in the middle of reviewing them. As you can see the screenshots were taken while I was working on a review of Newser. 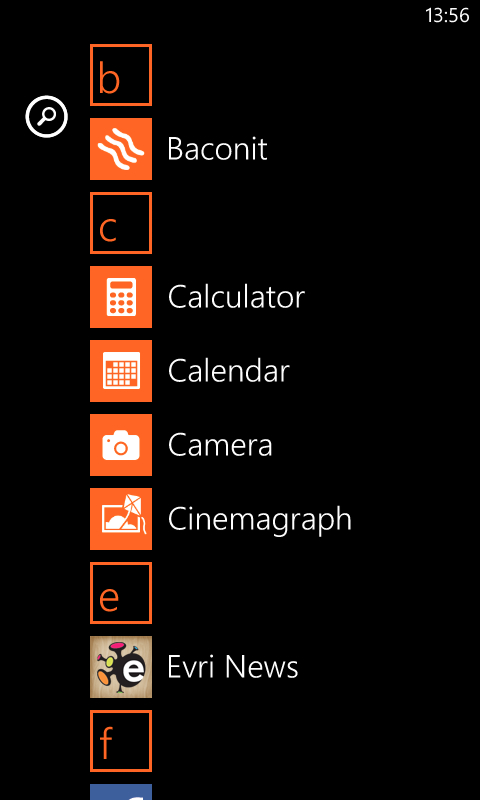 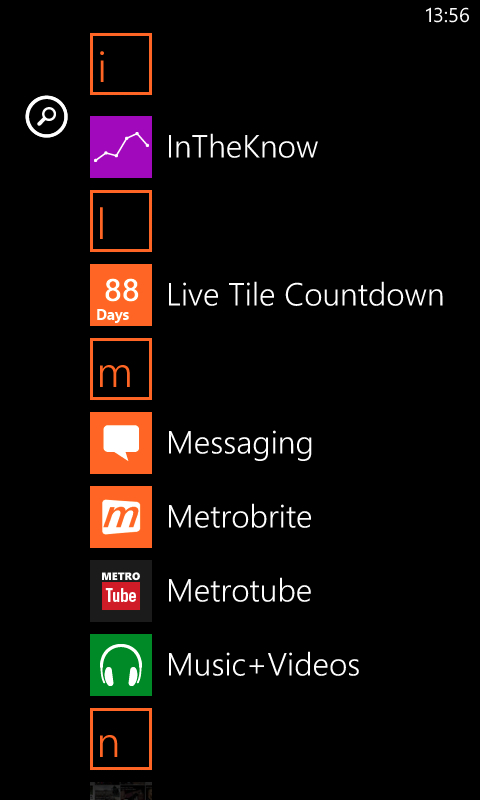 Not every app makes it to my Start screen, and some of the apps here have actually been demoted back to the app list (and no, I'm not going to name them, that's not fair). Here are my Windows Phone 'Mentioned in Despatches':

Baconit is Quinn Damerell's Reddit reader, which shows just how easily the Windows Design Language can cope with the complicated sprawling nature of a busy site like Reddit.

I'm surprised that Windows Phone has not made more of Flickr. This is little more than a photo uploader that's not integrated with the rest of the social scene in Windows Phone, but I'm hopeful of an update from the new and improved Yahoo!

Giffgaff is a third party app that keeps an eye on my pay as you go mobile account with the UK network.

At the moment Metrobrite doesn't do much - it's an app that works with the Eventbrite invite/event management site. But when I get to SXSW Interactive in March, with parties in every spare space in Austin, TX, this will be an invaluable reference.

I seem to have been travelling around Scotland a lot more in the last few months, so having not just the train times on Scotrail, but live departure boards on my phone, has been a useful tool both for planning and making the most of my time when out of town.

Finally there's the official Twitter app, which I need to use, and still use, but don't particularly enjoy it.