The F(x)tec Pro1 now up for pre-order

Back in March, I looked at the first hands-on videos with the F(x)tec Pro1 prototype, inspired by the classic slide and tilt mechanisms from the Nokia E7 (and N97 and N950), with full QWERTY functions hidden beneath a large touchscreen. Fast forward six months and the Pro1 is now a reality, with the company putting it up for pre-order, with hands-on videos of the 'final' hardware. A review handset is coming to AAS/AAWP in the next few weeks, but I thought a quick round-up was needed in the meantime.

First of all, on the subject of the inspiration behind the Pro1, from my earlier piece:

Back in early 2010 I was part of a panel of people giving feedback on different aspects of phone functions, software and hardware, run on behalf of Nokia. The latter section was about handling a variety of unmarked (non-running) prototypes and saying what we thought about the physicality. Two, in particular, caught my eye, with QWERTY keyboards and slide'n'tilt displays. One went on to become the Nokia E7, running Symbian, the other (larger, which I preferred) went on to become the Nokia N950, running MeeGo...

What I liked about the Nokia N950 prototype, compared to the E7, was that although the phone itself was roughly the same size, the keyboard truly was full width, and not sculpted to sit inside a 'hollow', as on the E7. The latter was very much about two handed thumb typing in mid-air (as we still do today, albeit on touchscreens), while the N950's keyboard seemed large enough to also have the option of two-finger finger typing while the device was sat on a desk.

From my original 2012 E7/N950 comparison feature, which is still online if you care to have a read, here's a shot of the two devices, E7 on the left:

...Anyway, Liangchen Chen apparently got handed a N950 one day and loved the form factor. So much so that, when Nokia failed to do much with it, he and his engineering design company (Livermorium) set about trying to make it happen themselves. Firstly by working on a Moto Mod keyboard for the established Motorola Moto Z series, and now by creating a generic communicator using a similar slide-and-tilt cantilevered mechanism as the old E7 and N950.

FX Technology Ltd has been set up to produce the new phone, though it's not clear exactly how the software side of things is being managed - see my remarks at the bottom of this article.

You may be asking why this news is being published on AAS and AAWP, given that the design is based loosely, most of all, on the Meego-powered Nokia N950, and given that it now runs Android? Because there has been a big swathe of interest in variants on the old 'Communicator' designs from Nokia, the idea that your smartphone can also be your 'mini-laptop' when out and about. Why take two devices 'into the shower', as it were? For many tasks when mobile, having a useable QWERTY keyboard is a real boon - answering emails better, posting longer social updates, jotting down notes for a meeting, and so on.

So if you're wondering where the 'spirit' of the old Communicators went, then here is one major contender. The side view will look very familiar to anyone owning a Nokia N97, E7 or N950 back in the day - the hinge system is effectively identical: 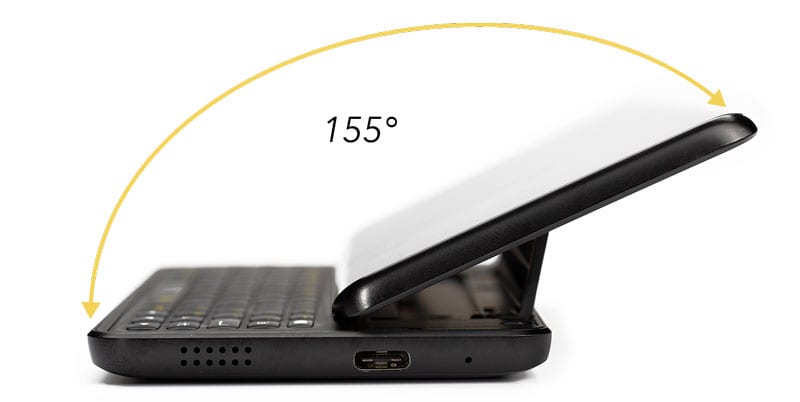 The specifications of the F(x)tec Pro1 are now final and published, of course, so I've summarised them here:

All of which sounds pretty decent, though as with niche devices like this the long development times do impact the exact components used. So, for example, the chipset is the two year old Snapdragon 835 and RAM is 'only' 6GB, though happily the delay has also meant that the now-often out-of-favour 3.5mm audio jack has been left in.

Still, compared to 'ye olde' Symbian phones like the E7 and to the now almost out of support Lumia 950 Windows phones, this will absolutely fly. The QWERTY keyboard is almost unique in the smartphone landscape of 2019. Yes, we also have the Gemini PDA from Planet Computers (and the Cosmo on the way), but that's modelled on the older Psion palmtops of the 1990s and is substantially larger, driven by the 'real' keyboard.

The two devices are very different in ambition though - the Gemini is for using with the keyboard 'out' ALL the time, i.e. like a laptop, with almost full touch-typing. While the Pro1 is designed to be used as a regular touchscreen slab/smartphone, with the idea that, when needing to enter more than a trivial amount of text, you snap open the keyboard and you're typing away, probably with two thumbs. If the Nokia E7 is anything to go by, the concept is surprisingly satisfying and, unlike the Gemini, the interface isn't compromised in day to day use at all.

I do have one big concern - security and the management of vulnerabilities (not to mention the fixing of bugs) are huge factors in the (rightly) paranoid world of 2019 and small companies making niche products are likely to get left behind. The Gemini is still on 2018 security and on a buggy Android 8 - which isn't really good enough, with the big phone players like Apple, Samsung, (the new) Nokia and Motorola all managing to keep their devices bang up to date. Will FX Technology succumb to the same issues? Only time will tell.

As I say, a review F(x)tec Pro1 is promised and will be here within a week or so. The preorder page is here and the Pro1 is priced at £649 in the UK, inc VAT. Which sounds about right - the Gemini is also now expensive - you're paying extra for the niche nature of the product, plus this is way higher specced than the Gemini.

PS. In the meantime, although the phone largely flew under the radar of the big tech sites, I did note that a couple of YouTube bloggers got their hands on the Pro1 at the IFA show in Berlin last week. Here are a couple of videos to whet your interest further, though note that they're both too short and lacking in real detail or insight (plus the second is in German!). Yes, yes, I'll do a Phones Show video review later this month, and then I'll cover the device properly.