Having worked my way through a number of Camera replacements for Windows Phone (what does it say about the built-in application, that so many third party replacements have been created?!), I've hit upon something of a winner. Clever Camera offers an accessible interface with a couple of genuinely unique features, let down only by slight speed and stability issues and the lack of a review function for previously taken photos. Well worth a look for anyone wanting to get genuinely creative on Windows Phone though.

Consider the interface for an application as interactive as Camera on a smartphone. What you don't want is a couple of basic parameters immediately accessible and the rest tucked away in a sub-menu - essentially what the built-in Windows Phone app gives you. In addition, some parameters aren't reachable at all, plus the confirmation previews of the shots you've taken are of a lower resolution than the actual JPGs - which is just horrible.

Enter third party camera applications, Camera360, CameraPro and others. And now, potentially topping the lot in terms of interface and features, Clever Camera. Interestingly, the name's a bit disingenuous, since the application's appeal is not in intelligence in its own software but in what it allows the human user to achieve.

Rather than tucking functions away on menus, everything's on display and accessible all the time, which I love in a camera application. Furthermore, most actions are optimised for left/right thumb use, i.e. you're holding the phone in both hands and it's the thumbs which need to do the work - nice thinking by the developers. 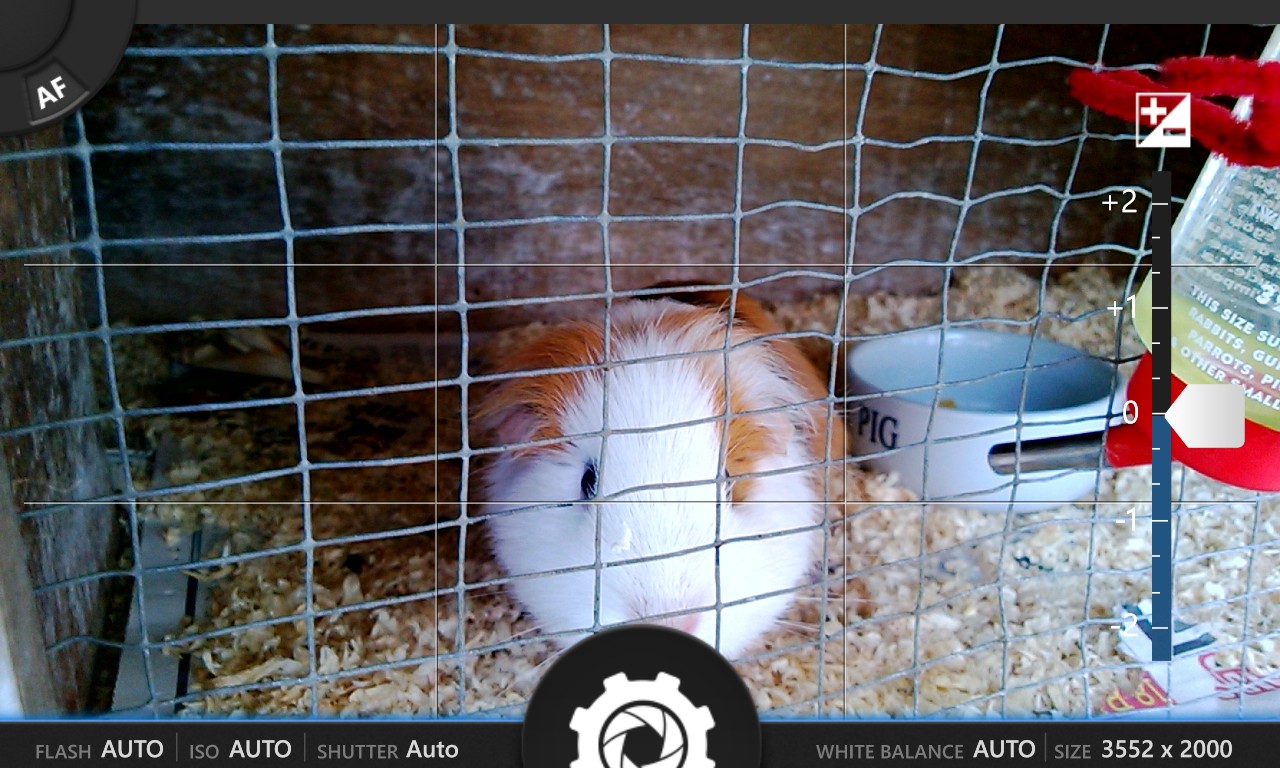 Along the bottom of the display are the various parameters that you'll be familiar with: flash setting, ISO (which can be set up to 3200 here, mimicking the camera capabilities in the upcoming Windows Phone GDR2 update), shutter speed (best not to fiddle with this unless you're after a specific arty effect, but you can if you want to), white balance and resolution/aspect ratio. Tap on the large thumb-friendly cog-wheel icon and the bottom bar expands into tappable buttons - tap any to adjust a parameter in detail. 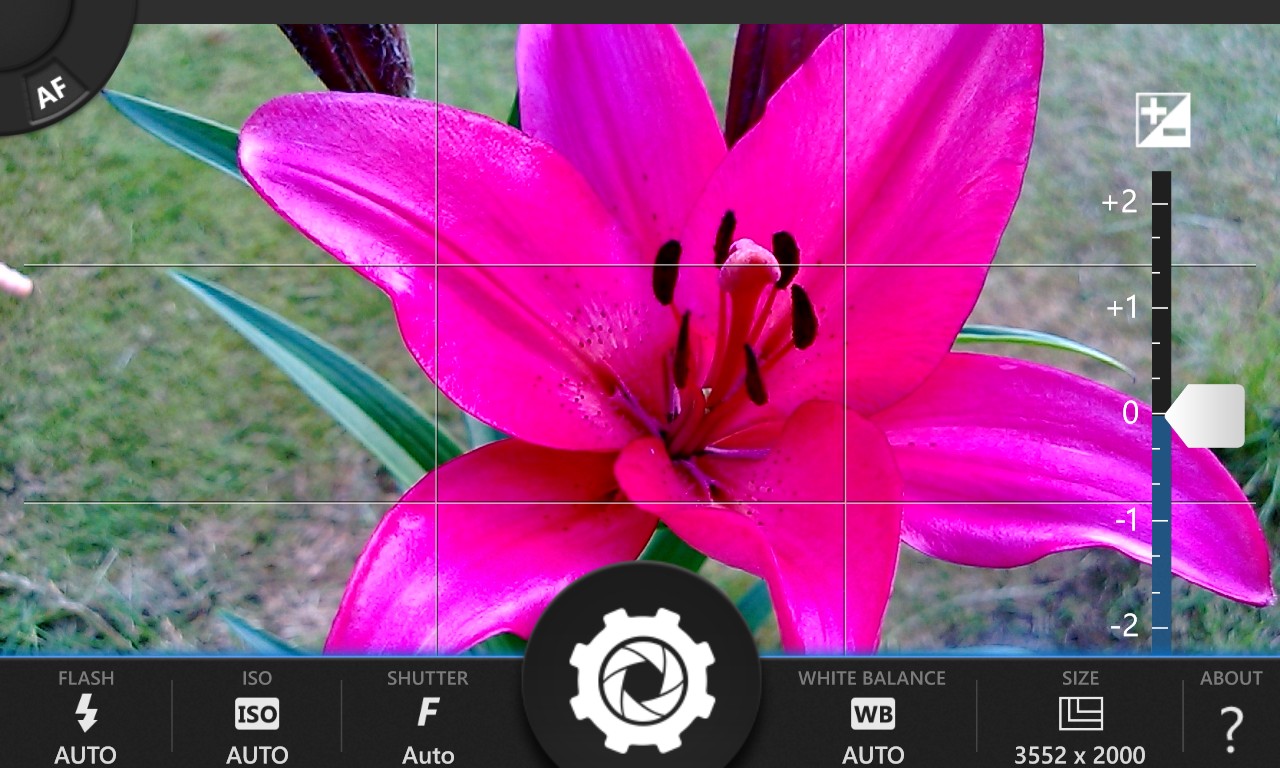 You can then leave this bar in place or hide it again with another tap on the big icon. Taking a photo can be done with the phone's shutter key or in the traditional Windows Phone way by tapping the screen on the point you want to focus on. The shot is taken and there's then a second of processing before you see the result: 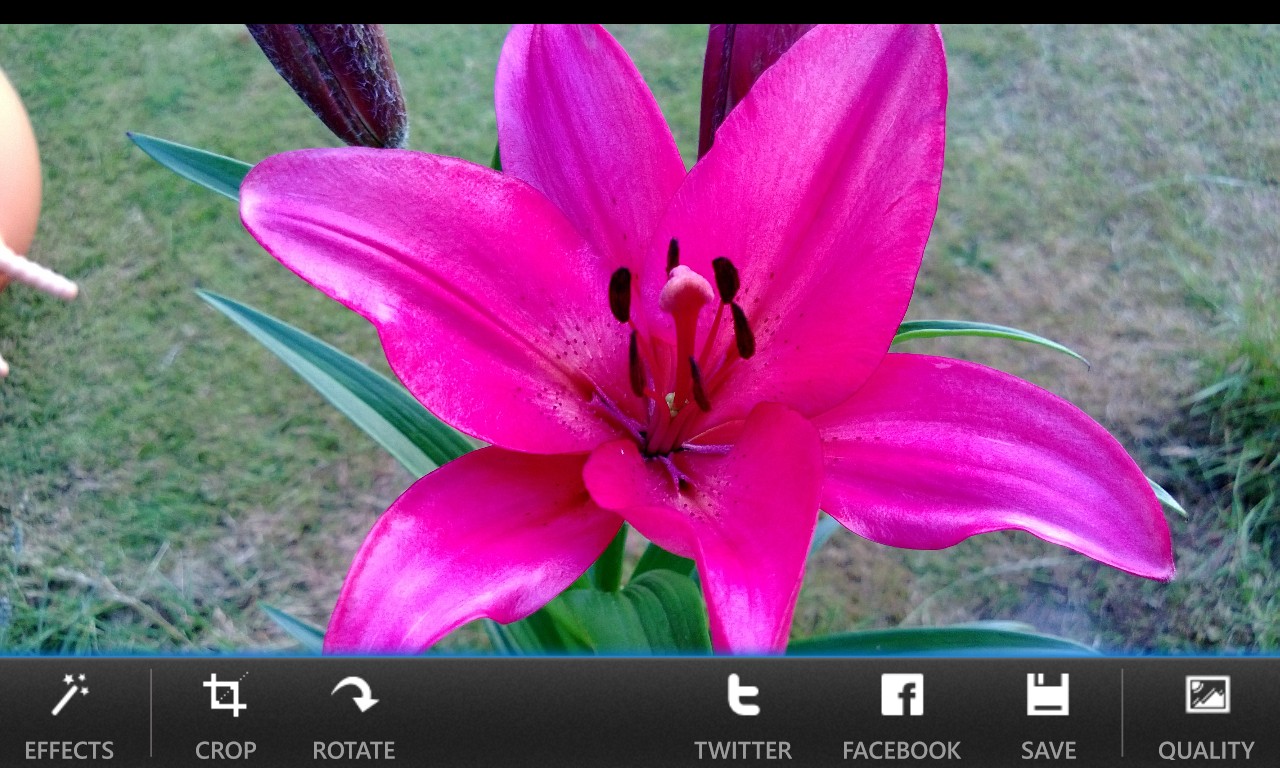 Most of the toolbar buttons here are obvious, aside from 'Quality', which lets you have fine control of how much (or how little) the final JPG gets compressed, i.e. 90% would be little compression, larger file size (around 1.5MB for an 8MP image) and higher quality, while 50% would be much greater compression (and artefacts), but smaller file size (around 250K, still for the same 8MP image). Most users will go for quality, of course, and 80% or 90% are good choices here.

The left button, 'Effects', pops up this panel: 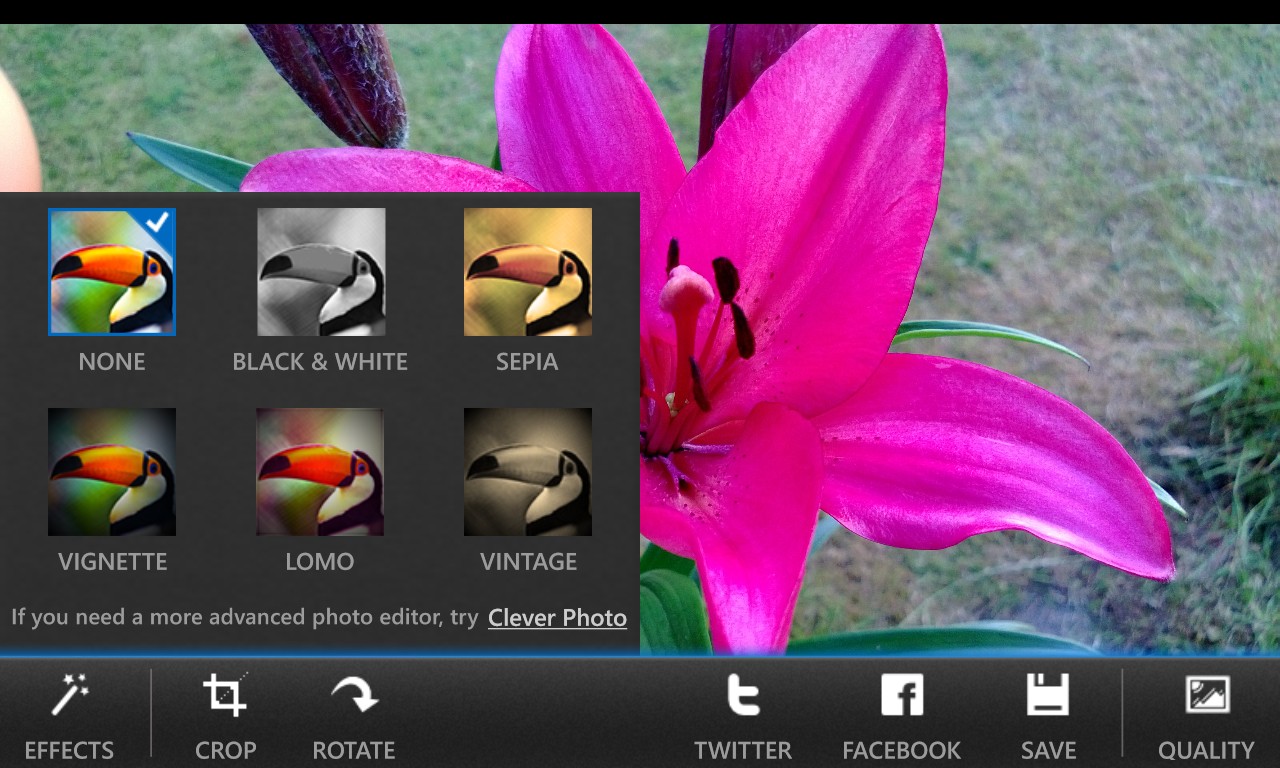 Essentially, this offers the five most popular image effects from Clever Photo, applying them before you save your photo. I can't say that I'd ever use these, but hey, you might be after a specific effect to save what was otherwise a disaster of a photo? Hit 'Save' when you're done fiddling and the photo is saved to your Camera Roll. Note that the UI stays in this screen, so that you can try other manipulations or 'share' to Twitter or Facebook afterwards, directly from the application. The latter sharing works, but there's no option to add a caption, so users would be better off sharing from Windows Phone Photos or in a dedicated social client. 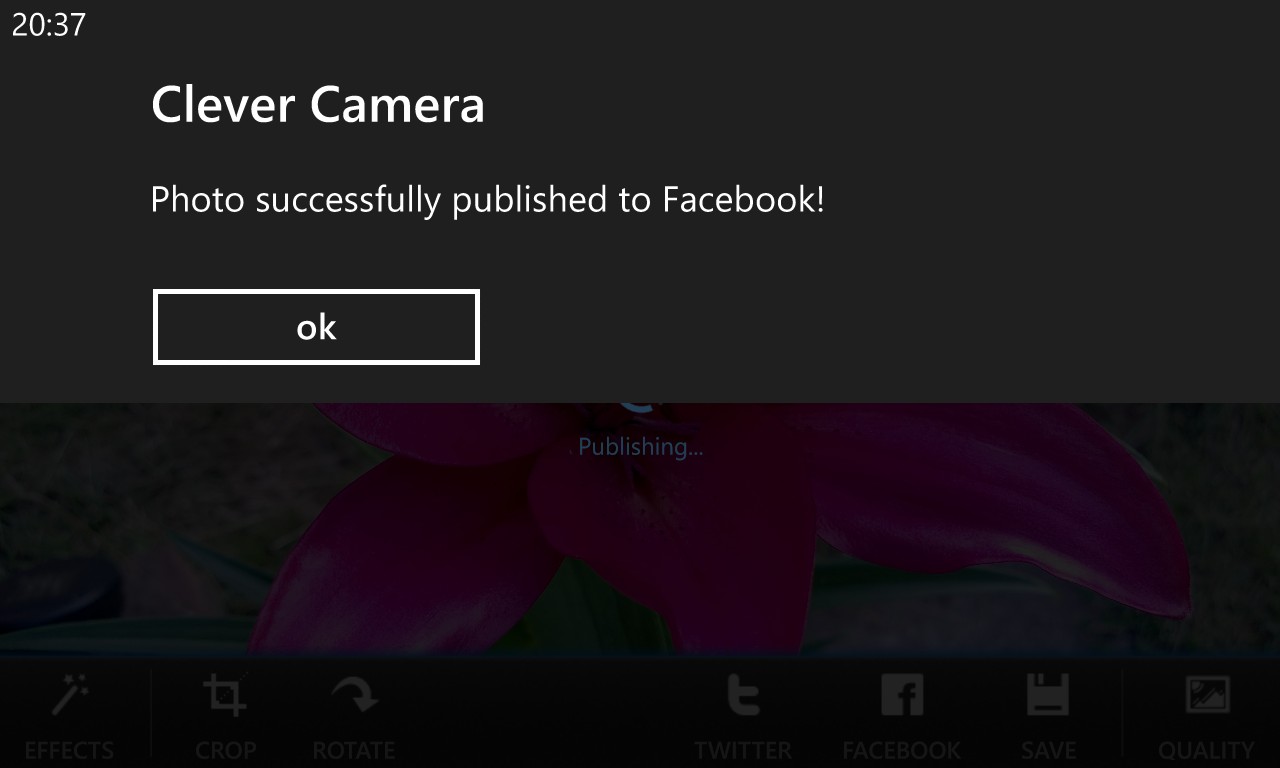 But, as I intimated earlier, Clever Camera has other tricks up its sleeve. Top left in the interface is an auto-focus/manual-focus toggle. Hit this and you get a thumbwheel on the left of the screen, as shown here: 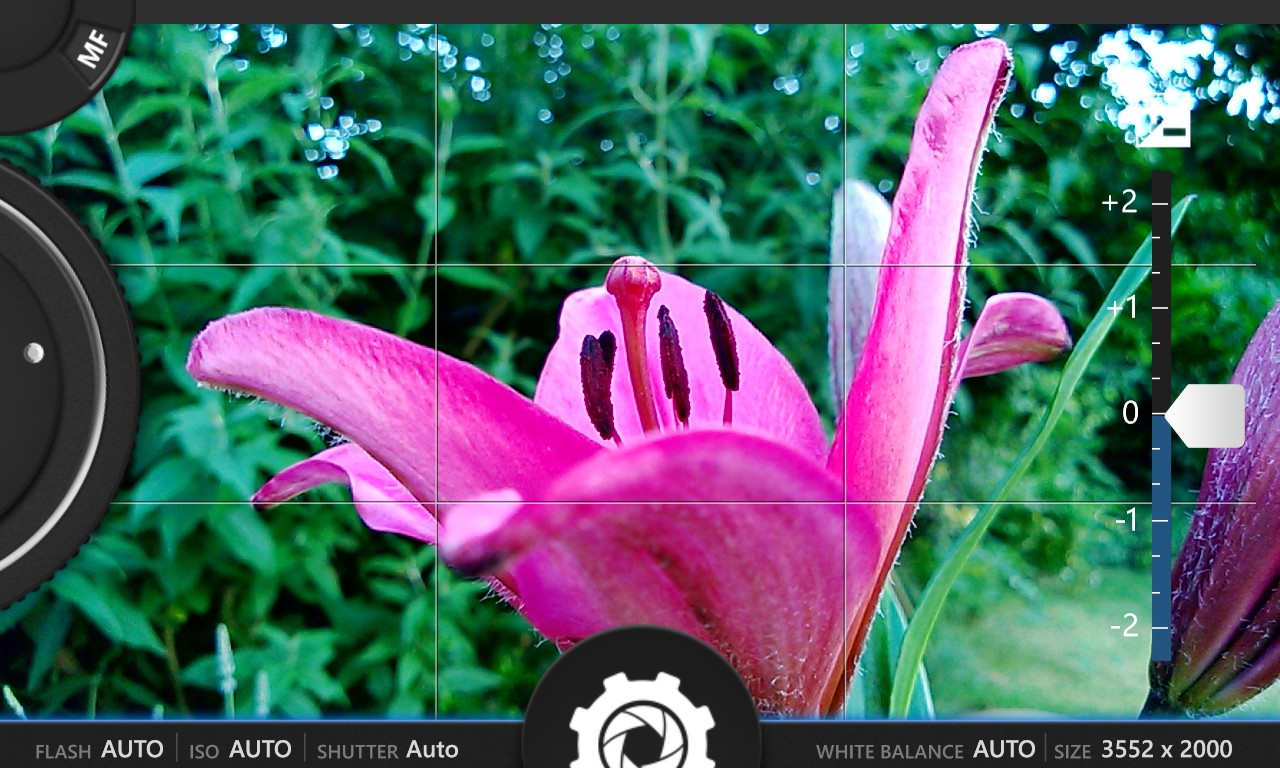 This gives direct control over the focussing elements in the camera phone lens, giving creative photographers an almost unrivalled control over exactly which bits of an image are in focus. For 'bokeh' shots, it's invaluable - and very, very cool to be able to brush your left thumb around the wheel and watch the various subject elements come into and out of focus.

Also in the UI, for the right thumb to work, is an exposure slider. This may look like overkill at first, but almost every photo you ever take might be made better if you'd had the chance to preview on-screen, in real time, the difference a small exposure adjustment might make. With the control so handily placed, it's a piece of cake to make small tweaks before hitting the shutter button. 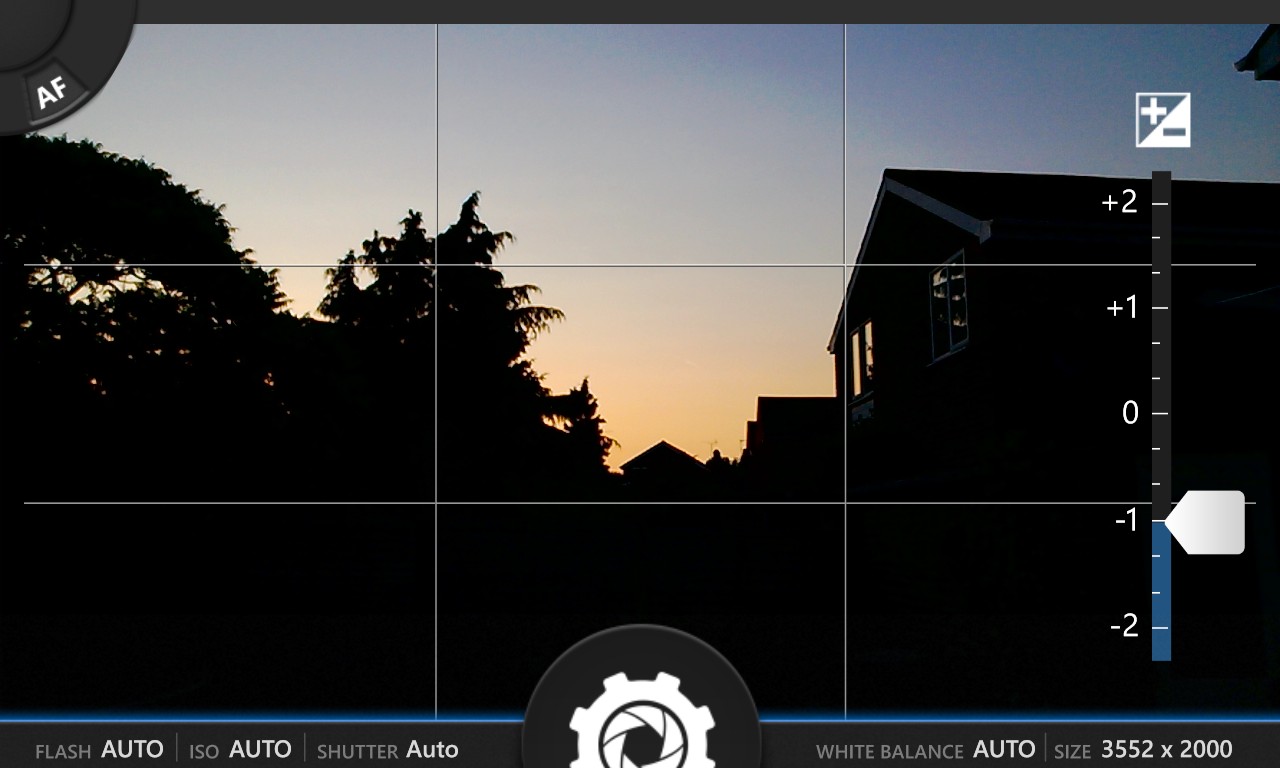 Finally, and by no means least, Clever Camera scores by presenting the photo that you've just taken at full resolution - in other words, you can multi-touch zoom in and see full detail, unlike the default Windows Phone Camera/Photos system. Unfortunately, the current version of Clever Camera doesn't let you go back and browse through your Camera Roll, so to look at past photos you need to install another third party application - it would be handy to have the functionality of, say, HD Photo Viewer, built in here too.

I mentioned 'speed' above. Now, the default Camera application does its image capture and saving very fast, but then it's using the phone's image processor - Clever Camera seems to be relying more on the main processor, with a second or so delay after capture while the photo appears on-screen, and with a further second or so while the photo is saved after any tweaks are made. Not to mention the waste of time acknowledging the 'Photo was saved!' dialog that pops up. The developer needs to work on masking the saving delays with an appropriate screen animation (or similar), plus making the pop-up something that goes away by itself or, better, doesn't appear in the first place.

But none of this will stop me using Clever Camera as my creative photographic application of choice on Windows Phone. It made an immediate impact on me and, I suspect, will on you too. It's available as a 'Lens' in the Windows Phone Camera, or as a standalone entry in the main app menu, though I understand that the GDR2 update for the platform will introduce the capability to set any camera app as the 'default' for when the camera button is long pressed, which will make it even easier to get into applications like this.

Highly recommended. You can try or buy Clever Camera here in the Windows Phone Store.