One of the surprise hits of the Windows Phone gaming world was, for me, Stickman Soccer, with amazingly fluid and fun gameplay, along with a simple freemium model and just a single IAP to get rid of ads. I loved this game and it's been on every Lumia since. And now we have the follow-up, built specifically for Windows 10 Mobile, laptops and, yes, Continuum, with extra modes and capabilities. It's ultimately best by far on the phone, of course, this is a touch-screen masterpiece.

First of all, and borrowing heavily from my review of the original Stickman Soccer, two years ago under Windows Phone 8:

My usual confession before reviewing football games is that I'm not really into football - I mean, I take a casual interest in world level games and kick a ball around in the park, but I'm not a super-fan. And yet Stickman Soccer is.... fantastic, it's perfect. It's utterly believable in the way players move and slide and shoot... The best football game ever on mobile? This has to be a contender. Heck, it's a contender for the best game, full stop...

If all that sounds like high praise then you only have to grab Stickman Soccer to see what I mean. It's a free download and the only in-app purchase is a measly pound/dollar to remove the ads - something which I felt very happy to pay after only 15 minutes play. In fact, the generosity of the developers only serves to increase my positive impression towards the game.

It's at this point that you look at the screenshots and start to wonder why I'm rating this game so highly - after all, the graphics don't seem state of the art and the players aren't that much more than the eponymous 'sticks'. The secret is in the UI and AI. That's the user interface in terms of controlling your players and the artificial intelligence of all the players on both sides.

The first is worth going into in detail - the developers have rethought the interface to work beautifully with touch on a phone - you use the virtual joystick to indicate a direction for the currently selected player to start running in, and you tap the 'pass' control to pass the ball to the nearest player in that approximate direction. And, when near a goal, 'shoot' obviously takes a shot in the (automatic) direction of the open goalposts.

Given the fluidity of movement of all the players, this control scheme works wonderfully well. As you work your way into your opponent's half and pass from player to player until you're within striking distance of the goal, you'll build up a huge amount of satisfaction. And if you do hit the back of the net, past the opponent goalkeeper AI, then it's GOOAAALLLL!! And so on.

All the elements that made the original so great are here and polished up, with higher resolution graphics (which look terrific on a high resolution laptop or Continuum display), more modes, more tournaments, a penalty shootout system - and a no-nonsense 'just buy it' purchase price (£1.50, I think, in the UK). The only downside is that it uses more RAM and more horsepower for all this - trying to run the 2016 version on an older Win-10-upgraded Lumia 1020 (I know, I know...) proved to be impossible - the game would just crash and I'm sure RAM was the culprit. Install this on, for example, a Lumia 950 or 950 XL though and it's a beautiful and smooth gaming experience. 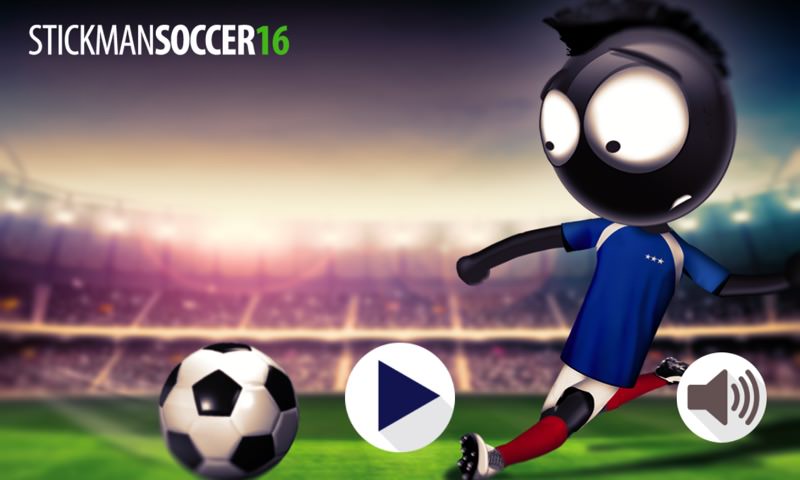 The stickmen have just enough motion and movement to seem 'real', though obviously they're cartoony in the same way as characters are on a Nintendo Wii. 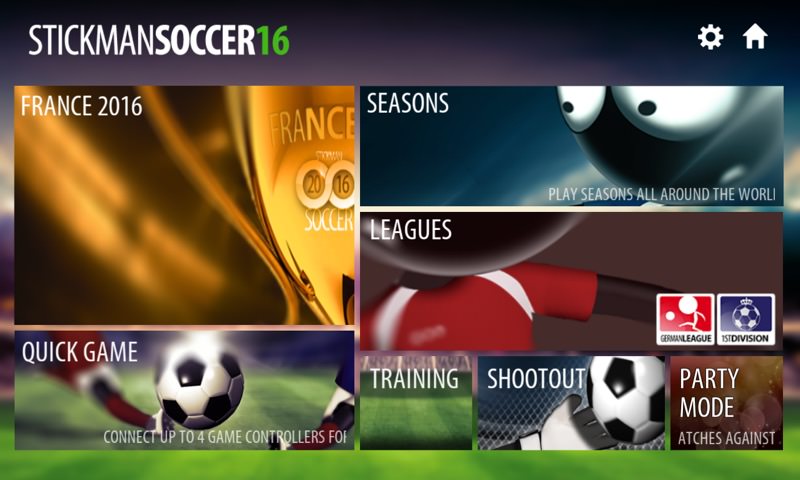 The range of modes has been expanded enormously since the original title. Most of the time I was in 'Quick game', which picks teams for you and just thrusts you into the action, but someone with more time and football passion will want to pick a championship, league or season more carefully! 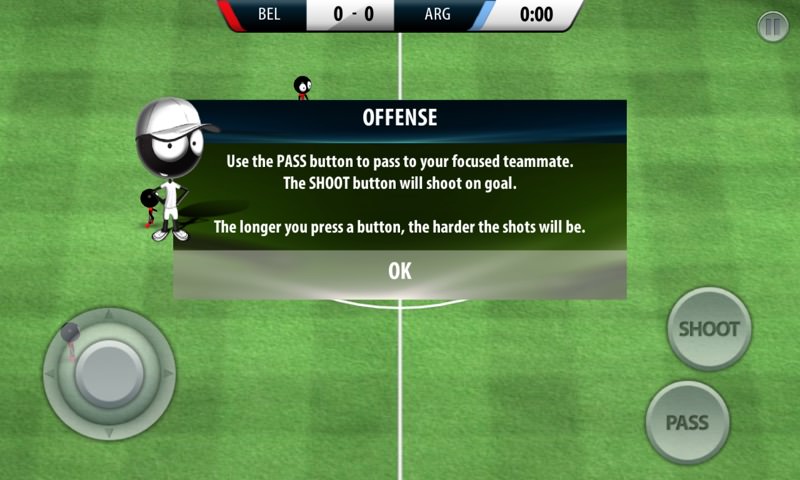 The gameplay's the same as before, with a left-hand, right-hand coordination needed that's not trivial, but quick to pick up.... 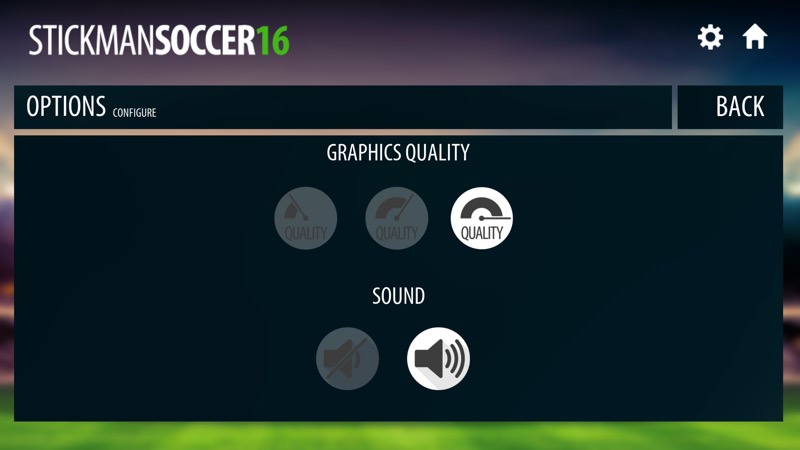 This time around there are three visual quality settings to play with - the Lumia 950 was fine on the highest, ditto Continuum... 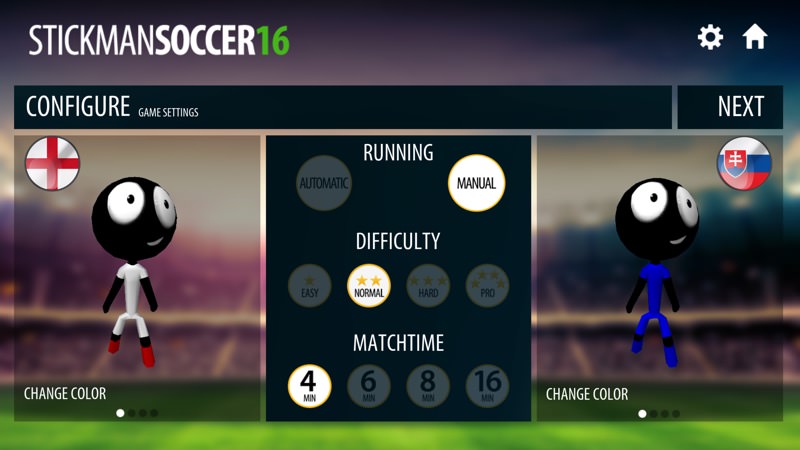 We now have two playing modes (stick to manual, automatic is far too frustrating in terms of (not) having an influence in what's going on!), four difficulty settings (you'll get obliterated in 'pro' mode, so stay away?) and four match lengths in minutes. As with the original game, the full '90 mins' are played, but with time speeded up while the ball's in play, a sensible nod towards playbility on mobile. 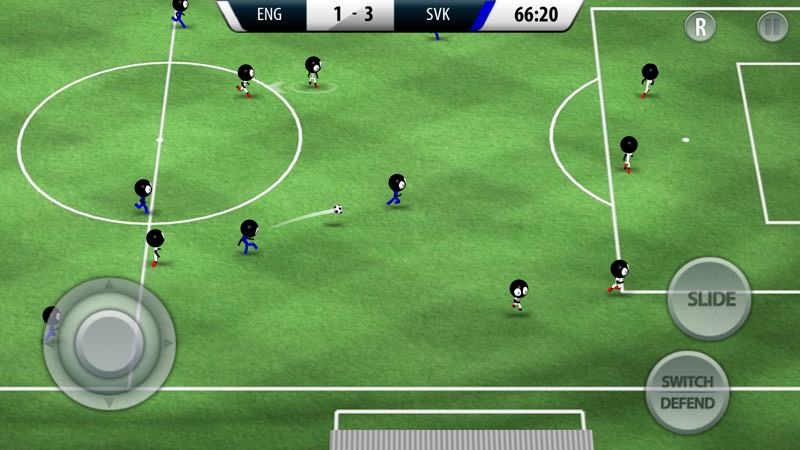 It's fast, it's smooth, it's Stickman Soccer and the gameplay is as enjoyable - and challenging - as the original... Just two actions while you have possession and two actions when the opposition have possession. Which equates to a perfect balance of complexity/simplicity. Here I'm in France 2016, trying to take England through and... doing as badly as the real team! Oh well... 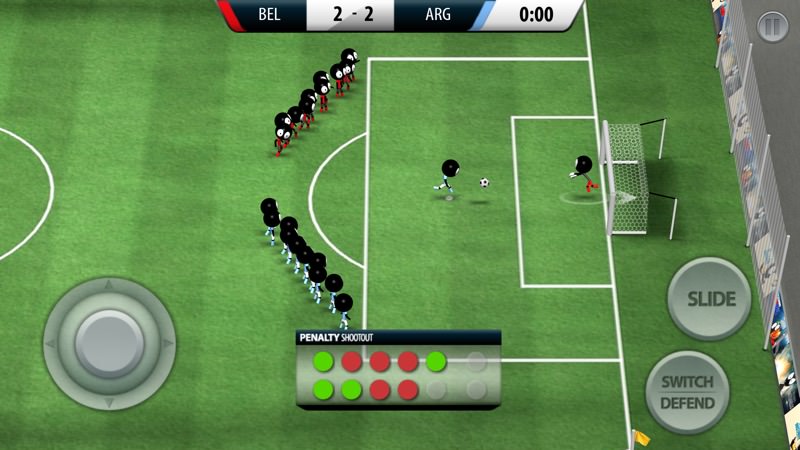 There's a penalty mode that you can go straight to, if you fancy some penalty practice/fun. It's OK, but not a patch on the proper 'end to end' football.... 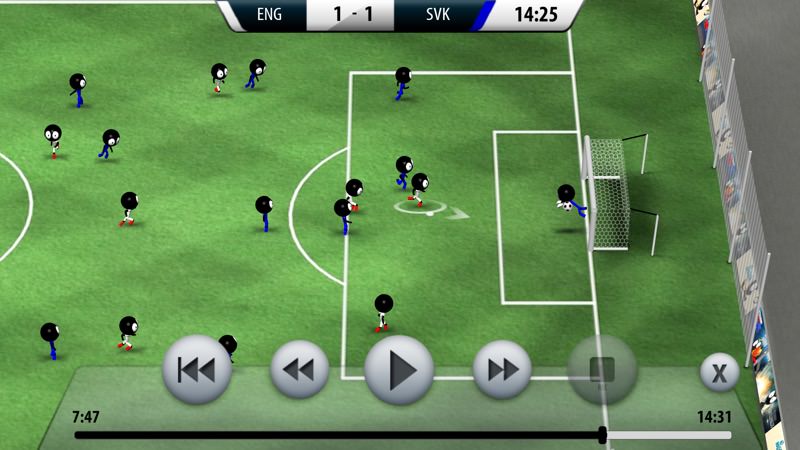 Basic replays let you play back any section of the game (with fast 'timeline scrubbing' to get to the bit you want), though only from the one fixed camera angle - maybe arty, TV-style goalmouth camera replays will be in the next version? 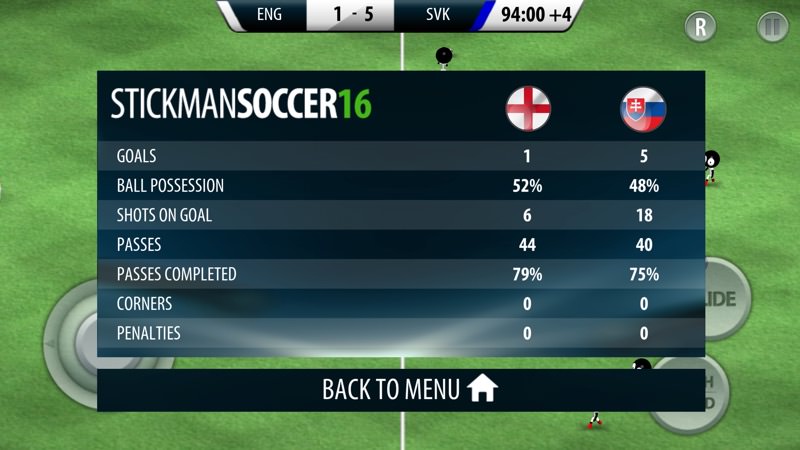 The stats collected in each game are impressive - how on earth did my England boys have 52% posession and yet lose 5-1? Who was controlling them? Oh wait....(!) 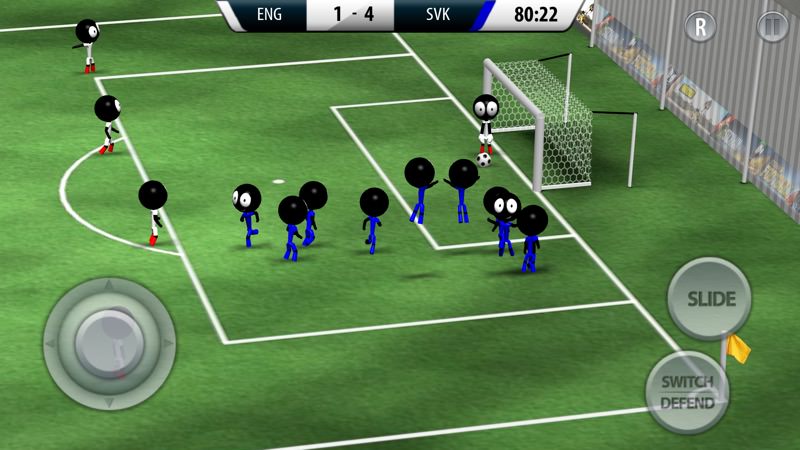 After a goal, the players gather and join in a choreographed victory dance. Yeah, ok, another Slovakian goal and a lot of despondent England players....!

The teams are all here for a recreation of a number of leagues around the world, including the UK Premier league, plus the chance to take an international team of stickmen through to the final of France 2016. Maybe you can appease your real time's abysmal performance with your own attempt at success?

I mentioned that this was built for Windows 10 and Continuum, so I had to give the game a try hooked up through a Display Dock. However, it's impossible to play it properly with just a mouse or the trackpad-emulation built into Continuum (as you might imagine), so I had to resort to a Bluetooth keyboard, wherein I found that the keyboard cursor keys were just about adequate, paired with '.' and ',' to handle the two action buttons in each mode: 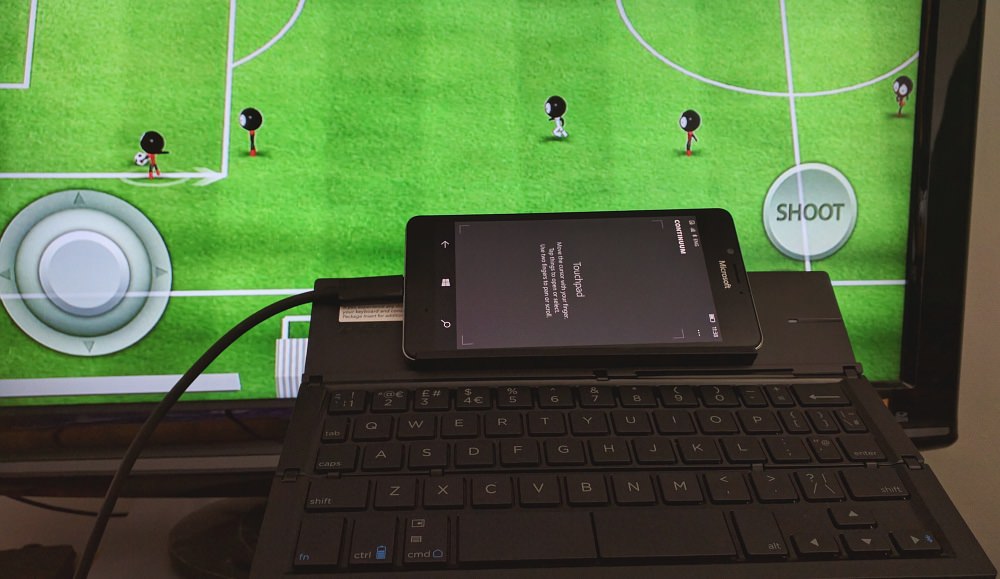 You'd think that the crisp graphics and large screen would be a great combination, but you have to think about game control. What's needed here really is a Bluetooth gaming controller. I'm sure keen gamers will already own one - but I had to make do! (The keyboard shown above is the Zagg one, by the way.)

There's even a 'Party mode' built into Stickman Soccer 2016, with support for 4 person multi-player, but this obviously doesn't apply to the phone version - on a PC you'd be able to hook up multiple game controllers via USB and Bluetooth. Still, worth noting - plus as a UWP, once you've bought it on mobile then you own it already on PC and vice versa!

Overall though, there's just so much love poured into Stickman Soccer by the developers - you can tell that they've play tested it to within an inch of its life. I still found that the game missed the odd screen tap, even on a Lumia 950 (shown above), so there are still tweaks to be made to this new UWP game. But it's looking very promising indeed and is my 'go to' action game when I'm bored with International Snooker Pro(!)