Apple's success with Airpods has spawned a number of 'true wireless' copies - furthermore, copies with higher quality audio, in-ear-canal operation and even (here) USB Type C charging. A couple of months ago I reviewed the waterproof SoundLiberty 53, similar but with microUSB charging. Now Apple has finally gone 'in ear' and waterproof too, with the AirPods Pro, though at a crazy £250. These 'Rimor' headphones come in at almost £90, which is also too expensive, I contend...

But on with this new accessory, which works well with any smartphone, including those running Windows 10 Mobile, as shown here. There's no doubting the premium aspirations here, with solid rubberised plastic charging case that's truly diminutive, and with earbuds that fit well and operate in both stereo and single/mono modes. 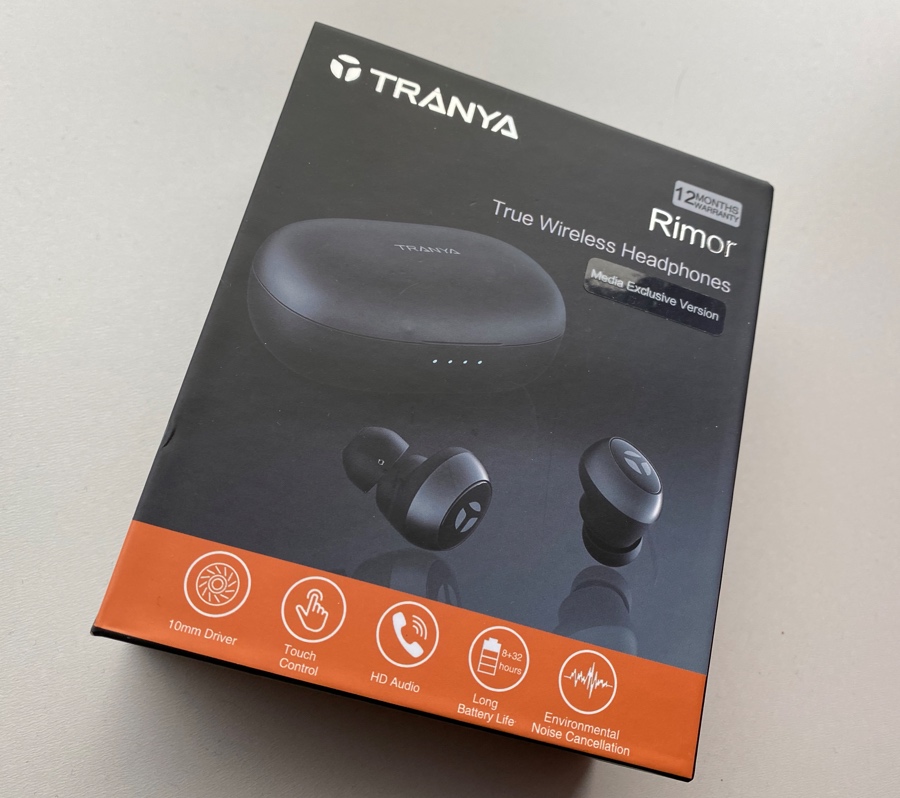 As usual with in-ear solutions, three sets of silicone tips are provided and I always head for the largest, giving the best in-ear canal seal - and therefore the best bass. As with Apple's own AirPods Pro, actually getting the Rimor buds out of the charging case isn't trivial, since there's little to grip. So you have to lever them out from the side - there's a knack! 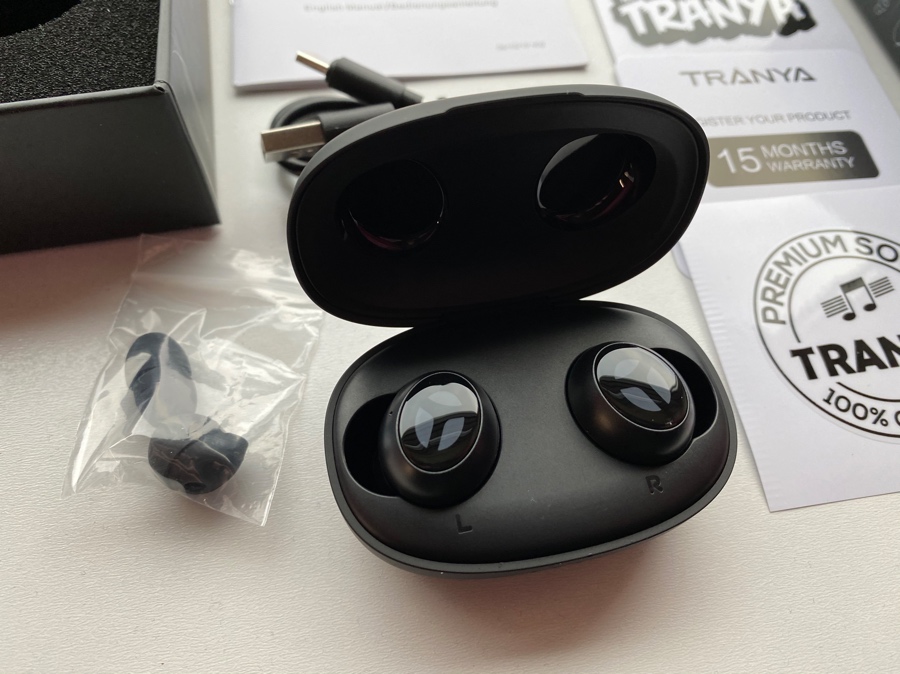 A little LED in the outer surface of each bud shows that charging's happening and magnets suck the buds down onto their charging pins in the case, it's all quite neat, that grip issue notwithstanding.

In the ear, it's obvious which way to rotate each bud for a good fit and I had no issues with them falling out when moving around or exercising lightly, though as usual I wouldn't recommend any 'true wireless' solutions when running, since one or both will fall out at some stage with the ground impact, and then you'll be replacing them. (Or going for what I end up with, something 'conjoined'.) 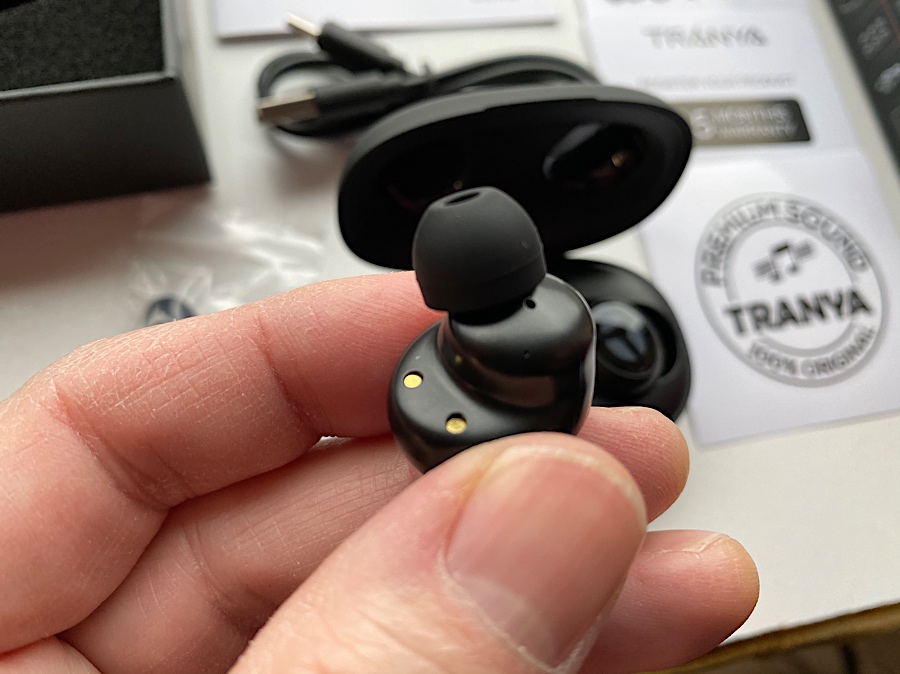 Tranya advertises high fidelity sound thanks to '10mm drivers', though there's more to quality sound than the size of your equipment (cough) - in this case, the DAC built into each earbud (the electronics that convert the Bluetooth streams to analog audio) isn't of the very highest order. As a result, I was a bit underwhelmed by the results. Bass was present in decent amounts but the very lowest frequencies (the thuds from a kick drum, for example) weren't represented, despite the 20Hz-20kHz claims. Ditto the top end, with cymbals that didn't shimmer and vocals that were ever so slightly deadened.

I tried the Rimor set with a variety of smartphones and got similar results, I'd put the music rendering at about the level of the aforementioned SoundLiberty 53, i.e. competent without blowing me away. Which is a problem at the best part of £90, since they're three times the price of the '53', with only a more modern charging interface to show for it. 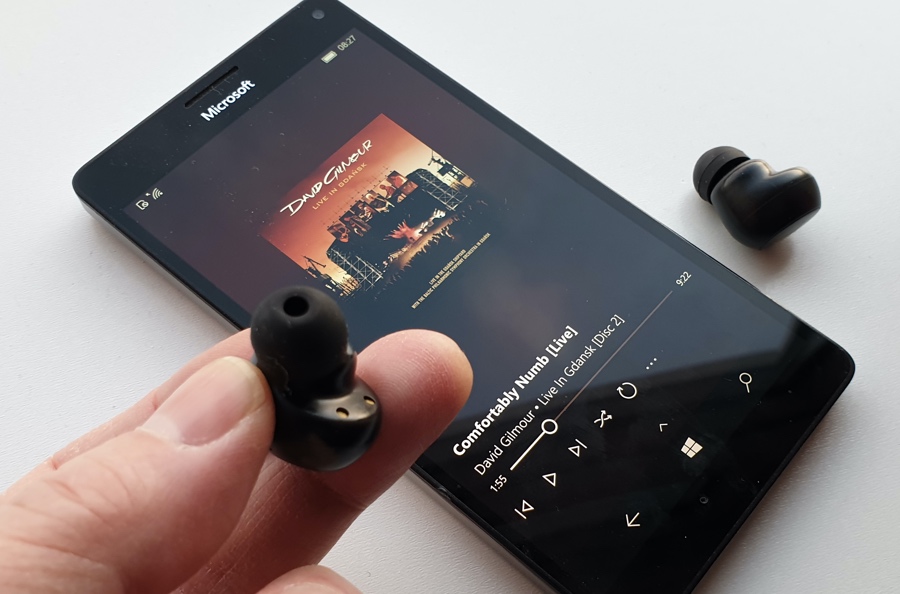 The touch control system is logical enough: one tap on either bud to play/pause/answer a call, two taps on the left to lower volume and two on the right to raise volume, and all of this worked as expected, though note that under Windows 10 Mobile (this being AAWP) the volume changes were multiplexed on top of Windows 10's own volume slider, i.e. they worked independently and this caused some confusion. Volume changes worked with the phone controls better on iOS and Android. 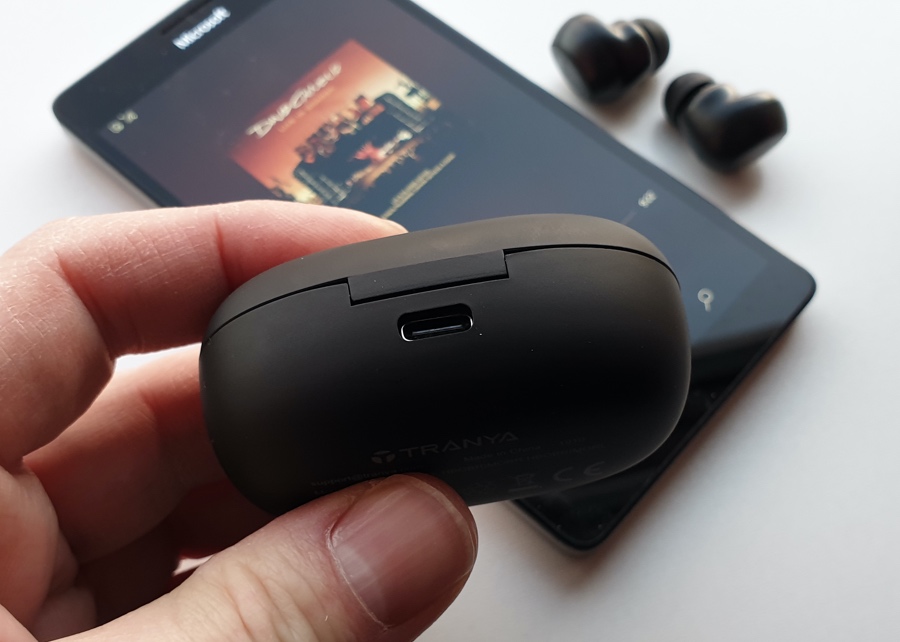 Playing time is quoted as 6-8 hours per charge, with 32 hours total including top-ups from the charging case. All fair enough, though slightly less than the '53' buds linked above. Then there's the waterproofing, merely 'IPX5', so rain proof, while the much cheaper SoundLiberty 53 are IPX7 and also dunk-proof.

Ultimately, the Rimor system is a perfectly fine product, it's just over-priced. I did note that they're $80 in the USA. So about £62 in the UK, depending on when you're reading this. Which is starting to get to the right ball park. But switch the product web site to UK pounds and you're up to almost £90. So maybe Tranya just doesn't want to ship here?

Comments welcome - there are quite a few 'true wireless' systems around now - and I haven't really got on that well with any of them! Do you have any recommendations that might help, in terms of audio quality?