So... 10 reasons why NOT Windows Phone, and what needs to happen!

Having set out 10 reasons why someone might want to choose Windows Phone, even in the face of quite a few previous Unique Selling Points becoming less err.... unique, with Microsoft's new cross-platform pushes, I thought it only fair to also identify 10 reasons why Windows Phone might not be a good choice, i.e. current possible showstoppers, though in the spirit of constructive criticism, I do offer possible ways forward.

As with anything in modern life, choices are informed with pros and cons, and in the tech world quite a lot of them. Most of all with smartphones and their operating systems, which are now insanely complex and with multifarious factors in favour of one OS/ecosystem or another. I've already gone over the reasons why a new smartphone user might choose Windows Phone over and above the Android and iOS competition, but I'm not so blinkered as to ignore the various things that are either wrong with Windows Phone or simply missing.

So, putting my sceptic's hat on, and in no particular order(!):

Not strictly limited to Windows Phone, of course, but the phenomenon of 'don't worry, we'll fix that soon' or 'yes, we know about that, it'll be in the next update, in six months time' or even 'yeah, we're going to change the kernel, so your devices won't be updated to the new version' - have all been rather familiar to Windows Phone users in the last few years. And, with a bit of a pivot again to Windows 10 next year, history stands a chance of repeating itself.

Yes, mobile OS are complex, and good programming takes time, but as you'll see from some of the items in my top 10 here, the waiting often gets galling. Waiting for an update to be rolled out, waiting for something to be put into the OS, waiting for an application to be written....

The future: I'd like to see more speed and commitment by all parties concerned.

I could write a whole new list with little 'obvious' things that are missing from Windows Phone, but some examples that come to mind are not being able to select videos for deletion in the Photos app - images can be tagged but not videos (see photo below), which is truly bizarre, since if you were having a tidy up then zapping space-hogging videos would seem a lot more useful. Also, what about the way emailed images are forcibly downsampled, with no way at all to send out the full images? What about the very minimal cell manipulation in Pocket Excel? The list goes on.... 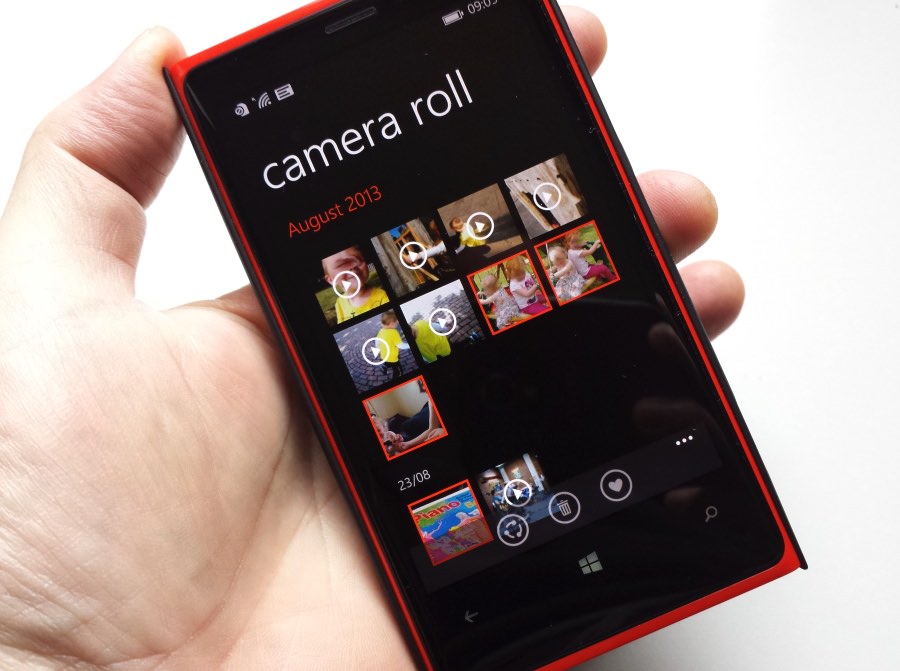 Multi-selection only works for stills. Wait, what?

The future: Will the gaps ever be filled completely? Probably not for any operating system, but at least the list for Windows Phone could be slimmed down a bit, Microsoft [see point 1 above!]

Yes, yes, Windows Phone includes a 'Narrator' system, but this is currently very region specific and there's no proper screen reader and magnifier. I'm no expert here, but the visually challenged readers who have got in touch tell me that Windows Phone is still not up to par here.

The future: At the very least, I'd like to see Windows Phone get up to the same level of accessibility as iOS and Android. It will happen, but see point 1 above again...

Yes, it sounds odd to be complaining about lack of access to Google's ecosystem from the point of view of Microsoft's (ecosystem) but the big G is the dominant force in online services, arguably, with Gmail, YouTube, Google Maps, Chrome, Google+, Hangouts, and Play Music all having fans. It's true that the third party development scene has come to the rescue for some of these, such as Metrotube, Metromail, CloudMusik, and so on, while HERE Maps arguably obviates the need for Google Maps, but having no Google+ client that works fully, having no way at all to join in Hangouts, even as a 'poor relation', continues to frustrate many - or at least enthusiasts who also have Android devices.

The future: Google seems adamant that it wants to expend precisely zero effort in developing clients for Windows Phone, and I can't see this changing in the future. 'Normobs' may well be happy living in a Microsoft-only world, of course - I guess we should just be grateful that the hooks into Gmail, Google Contacts and Google Calendar work at all - not having Google PIM data synced to every phone would be a showstopper for me, at least.

Oh Twitter, your Windows Phone client is languishing. Last updated four months ago, it needs rework, both cosmetically and principally to improve integration with Windows Phone 8.1. The utterly unnecessary top (clock) bar, the oversized tabs, the way you can't 'share' to Twitter from most apps, the way you have to refresh feeds manually.... Twitter for Windows Phone is not a total abomination, but let's just say that the lack of updates is getting a little conspicuous....

The future: Surely a big update to Twitter is just around the corner?

One of the most popular media applications in the world, and many people's go to source for entertainment, the Windows Phone client is a joke. No support for user accounts means that, on Windows Phone, I have to pretend to be my wife all the time and we see everything we each watch. Which gets a bit annoying when she gets prompted, on Netflix on her laptop, to 'resume' Avengers Assemble just because I was watching it on my Windows Phone the previous day.

Plus there are UI issues, not least the way that backlit Windows Phone controls stay lit during playback and crashes like the one below (which I wasn't able to resolve on this particular device). 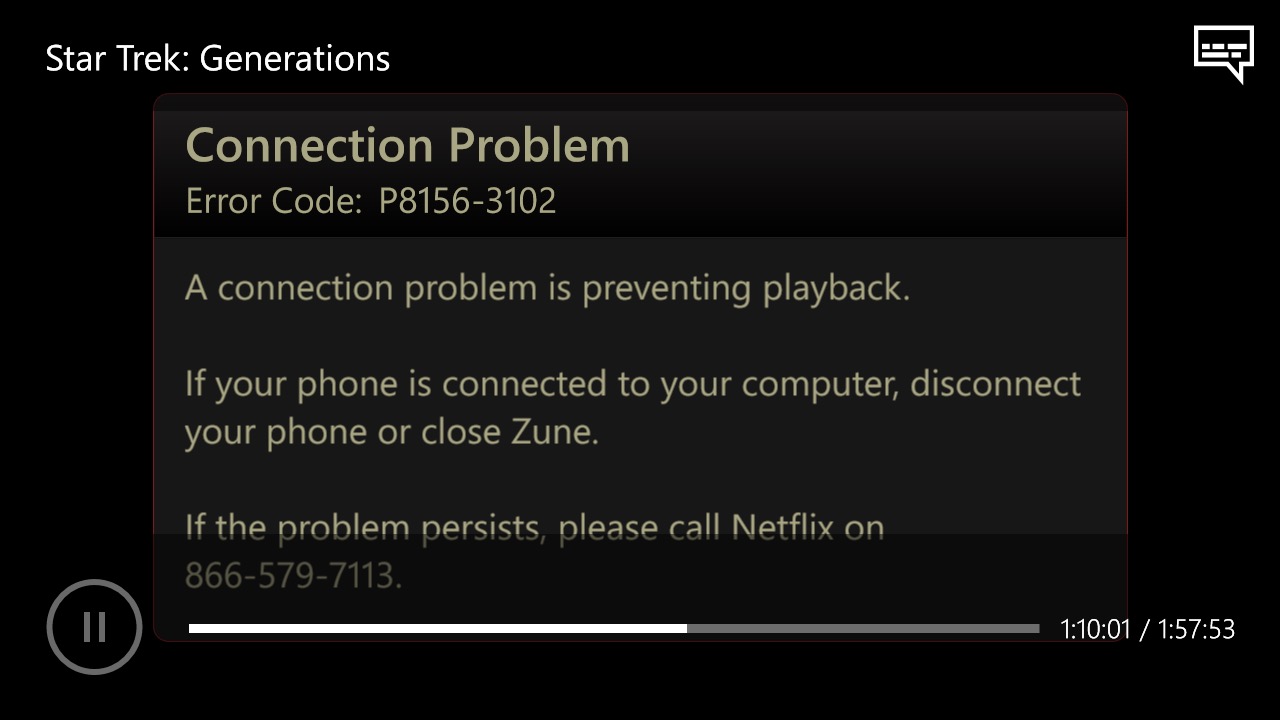 The bad: Netflix now unusable with this persistent crash on my Lumia 830. The good: the film is pretty awful, Windows Phone just saved me a couple of hours of my life 8-)

The future: It's evident that the Netflix client has simply been forgotten by the company - surely Microsoft would do well to throw some cash in this direction, as a financial incentive? And while we're at it, what about Amazon Instant Video, Netflix's great rival. There isn't a client for this at all yet.

I've ranted a bit about this in the past, e.g. here talking about 1080p/HD games, but the gaming gap between Windows Phone and the iOS/Android duopoly is only widening. Many top leisure titles aren't available on Windows Phone at all, and the ones that do come over are routinely a month, two months or sometimes much longer behind the competition.

The future: More simultaneous releases across all three major mobile platforms, please, developers. E.g. in the case of FIFA 15 Ultimate Team. Only this time, something that's actually a good game....

This is going to sound geeky, but there's still no HID (Human Interface Device) protocol for Bluetooth in Windows Phone. It's the magic set of routines that enable Bluetooth keyboards. And yes, WordFlow is nice and quick, but there are. so. many. geeks. who. want. the. option!

Being able to hook up a nice Bluetooth keyboard to a Lumia 1520, for example, would be a great combination. But it needs full support from Microsoft.

The future: HID was rumoured to arrive in Windows Phone 8.1 Update 1, which hasn't actually rolled out yet, so I guess we should cut Microsoft some slack and wait a bit longer?

It's tough to put examples in here, since all of us have one particular application that's proving a showstopper for us and which is different to everyone else's showstopper(!) Mine is that the only KeepassX client, 7Pass, has been broken or in alpha status for all of its life and I've essentially given up on it at this point.

The future: The numbers in the Windows Phone Store do keep growing, but there are still a depressing number of rip-offs, novelties and wastes of space....

I've been hard on the Lumia 930, it's true, for its lack of Glance screen and pentile display, but it's not a terrible device. However, it's also not the all-singing, all-dancing flagship that Microsoft could point to in order to attract the interest of tech media and early adopters/enthusiasts. Every platform needs a 'halo' device and the 930 isn't it. Back in the day, the Lumia 1020 was, arguably, a halo device, if only because its USP was unmatched, and the Lumia 1520 has almost everything a halo device needs - except that it's huge.

Where is the 1020 successor? Where is the 935 or 940? All we've had this year of remote interest in this sphere has been the Lumia 830, which is going to be pretty good value but which can't really compete at the high end. Sorry, Microsoft, the platform needs more, it needs a glowing flagship.

The future: Never mind the profit, go for the glory, release something certifiably sexy!

PS. Lest you think all this is too negative for 'a Windows Phone' site, please also make sure you've read my complementary '10 reasons FOR' piece!

Filed: Home > Features > So... 10 reasons why NOT Windows Phone, and what needs to happen!